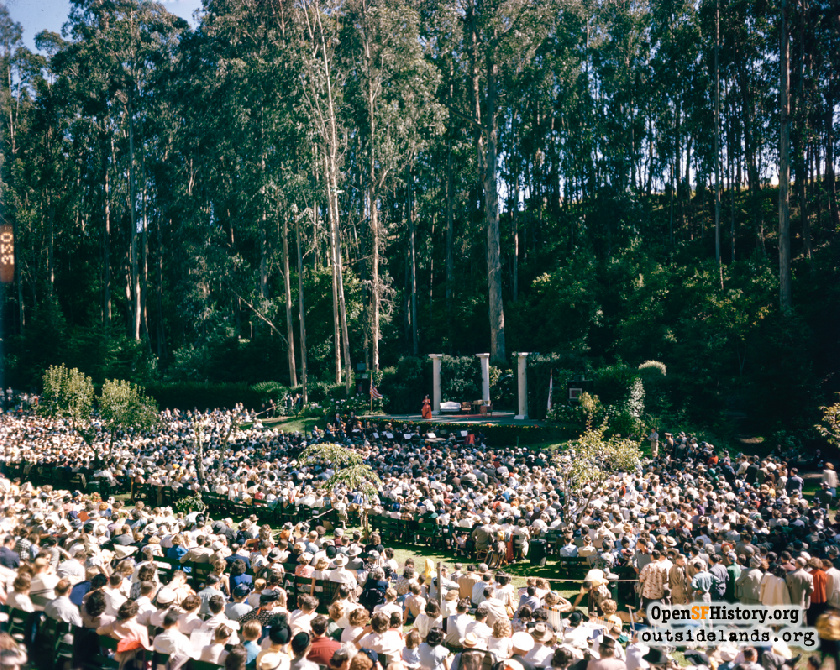 The history of a musical glen.

Excerpted with permission from Mr. Pemberton's paper: "Amid the Sand and the Fog: The Development of the Sunset District of San Francisco, 1930-1940"

The final aspect that was crucial to the growth of the Sunset as a distinct district was the establishment within the district of a few of the city's premier recreational and cultural institutions, including Fleishhacker Pool and the various attractions in Golden Gate Park. But perhaps most noteworthy among these institutions is Sigmund Stern Grove, located on a parcel of land along Sloat Boulevard that was donated to the city in 1931 by Rosalie Stern, widow of Sigmund Stern and President of the city Playground Commission (later renamed the Recreation Commission). 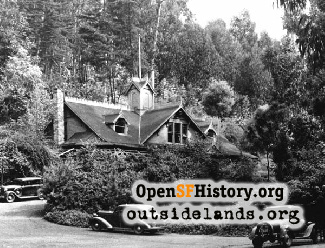 The Grove was the site of the famous Trocadero Inn, run for many years as a resort by its owner, George Greene. But Greene had closed the Trocadero in 1916 for fear that Prohibition would lead to trouble with bootleggers. In 1931, John McLaren, San Francisco Superintendent of Parks, recommended to Stern that she buy the Grove as a memorial to her late husband, noting the excellent setting in terms of weather---Stern Grove is said to be ten degrees warmer than the rest of the city, due to eucalyptus trees which block the wind---and acoustics--it forms a natural amphitheater. So Stern purchased it from Greene, who was living in the Trocadero at the time, for $50,000. In a letter to Mayor Rossi date September 16, 1931, Rosalie Stern donated the property to the city with the stipulation that "[t]he land shall be used solely and exclusively for recreational purposes." Jurisdiction for the Grove was put in the hands of the Playground Commission, which was to consult with the Trustees of the Sigmund Stern Recreational Fund to determine "the general scope and character" of activities in the Grove. Rosalie Stern, as President of the Commission and Trustee of the Fund, was well-placed to determine the future of these activities.1

Stern Grove was dedicated on Saturday, June 4, 1932 in a ceremony that presaged later musical events in the Grove. The ceremony included a number of musical selections by a multi-cultural variety of composers, from Chopin to Haydn to Sousa, as well as Russian and Magyar folk dances. The performers included Laura Dubman (a "child pianist"), the Junior Civic Symphony, conducted by Jascha Veissi, as well as children from many of the various city playgrounds. The city Recreation Commission received many congratulatory notes from well-wishers, some from as far away as New York City, such as the note from Rabbi Louis I. Newman of Congregation Rodeph Sholom which expressed the hope that "the San Francisco community is deeply appreciative of the generous spirit which Mrs. Stern maintains with respect to its welfare."

Two Sundays later, the Grove played host to a its first popular concert, a benefit by the San Francisco Symphony with "[a]ll proceeds [going] for Relief of Unemployed Musicians." Over the next several years, the Grove was the site of a number of similar concerts and festivals, including a three-day Russian Fair in 1937 to mark the opening of the Golden Gate Bridge and an International Dance Program in 1938 featuring representatives of numerous ethnic groups, from Danish to Japanese. Additionally, an annual Spring Festival was held in the Grove, which in 1938, for instance, drew a crowd of over three thousand out to see a performance of "Rumplestiltskin" by children from the playgrounds, accompanied by the Junior Civic Symphony. 2

A turning point came for Stern Grove with the beginning of the Midsummer Music Festivals in 1938, which consisted that year of a dozen free shows running from July 10 to September 25. The shows were a great success, drawing between thirty-nine and fifty-five thousand spectators total (depending on the source), and starting an annual tradition which has been maintained to this day. In keeping with the spirit of the earlier concerts and festivals, the summer concerts were scheduled to include a variety of acts, representing different styles of music and different ethnic traditions. Once again, an International Dance Festival was held, featuring children from the playground.

Additionally, the Federal Music Project of the WPA twice presented performances--on July 17 and August 7--by the Colored Chorus of Oakland, conducted by Elmer Keeton. The Chorus performed mostly spirituals, but also included two Schubert selections by soloist Marcus Hall. A glowing description in the program lauded the Chorus as possessing a "loveliness of blended tone quite unparalleled among local choirs." In spite of this high praise, it is not terribly surprising that in the social climate of the 1930's, the two performances by the Colored Chorus drew below-average audiences. 3

Though the first season of the Midsummer Music Festivals was a success, planning it was anything but simple. The planning for the concerts was done by the Stern Grove Festival Committee, chaired by Rosalie Stern, which met while the concert series was ongoing, allowing for changes to be made as problems arose. One key difficulty was scheduling the performances. The minutes for nearly every Committee meeting include a new tentative schedule, and some shows were booked as few as two weeks in advance.

A more major difficulty was money--the Committee estimated that the cost for the season would be $1500, but the final total turned out to be $2188.33. The largest portion of costs ($1856) were for personnel, specifically for the conductors and soloists--all other performers do not appear to have been paid--while the remaining $332.23 went mostly to transportation costs. The Recreation Department paid the costs of posters, programs, and the like. In order to cover the expenses of the Committee, individual donors were recruited by the various members, one hundred donors in all (most of who donated $25 or less, though one donor gave $500). Money was also apparently the source of trouble with the Musicians' Union, which objected to band and symphony concerts--presumably on the grounds that the performers would not be paid, though this is not explicitly mentioned in the Committee minutes. At the end of the season, the Committee discussed charging admission the next year to help defray costs, but this was dismissed for fear of greatly diminishing the attendance.4 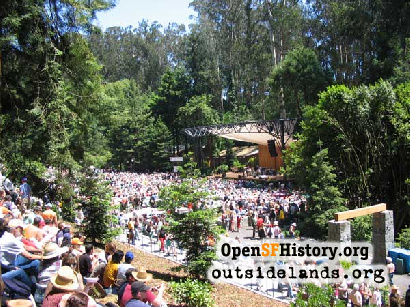 Though the Grove is known best for its Midsummer Music Festivals, it also served the function of a pleasant gathering place for various groups, and, an important consideration, especially during the Great Depression, it was free of cost under most circumstances. For 1935, three years before the beginning of the concerts, figures for the Grove show an total attendance of 73,926 people, including 28,468 children. By 1939, this figure had risen to 132,739 people (in addition to the 95,328 who attended the Festivals).

Grove rules "strictly prohibited" use of the grounds for religious, political, and commercial purposes. Nevertheless, a look at a report for December 1938 shows that a number of religious organizations, including the Latter Day Saints, St. Ignatius High School, and St. Cecilia Church, used the Grove (though not necessarily for religious purposes). Other groups using the Grove that month included the Girl Scouts of America, the Order of Eastern Star (Parnassus Chapter), and the Visitacion Valley Community Center, mostly for "social" purposes. Additionally, Aptos Junior High used the Grove on three separate occasions for graduation ceremonies. Most groups scheduled their activities for the evening, oftentimes running as late as midnight (when the Grove closed), while the number of attendees for each group ranged from a low of fifteen to a high of one hundred. By making the Grove open to these groups, it served an important community function. 5

Contribute your own stories about Stern Grove!