The poet and writer remembered the sand dunes of the 1850s. 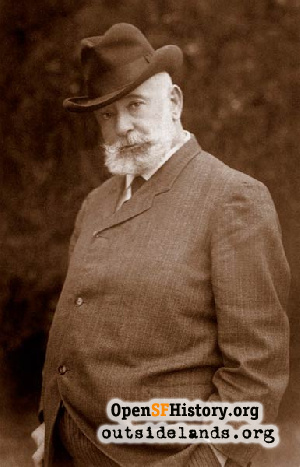 In the late nineteenth century, Charles Warren Stoddard was a well-known writer and poet. But in the late 1850s, he was just another boy exploring San Francisco. In his book, In the Footsteps of the Padres, published in 1902 and revised ten years later, Stoddard reminisced in his poetic way the march home across sand dunes that later become the western neighborhoods:


The way home was sometimes a weary one. After leaving the bluff above the shore, we struck into an almost interminable succession of sand-dunes. There was neither track nor trail there; there was no oasis to gladden us with its vision of beauty. The pale poet of destiny and despair has written:

In the desert a fountain is springing,
In the wide waste there still is a tree;
And a bird in the solitude singing,
Which speaks to my spirit of thee. {Byron}

There was no fountain in our desert, and we knew it well enough; for we had often braved its sands. In that wide waste there was not even the solitary tree that moved the poet to song; nor a bird in our solitude, save a sea gull cutting across-lots from the ocean to the bay in search of a dinner. There were some straggling vines on the edge of our desert, thick-leaved and juicy; and these were doing their best to keep from being buried alive. The sand was always shifting out yonder, and there was a square mile or two of it. We could easily have been lost in it but for our two everlasting landmarks---Mount Tamalpais across the water to the north, and in the south Lone Mountain. Lone Mountain was our Calvary---a green hill that loomed above the graves where slept so many who were dear to us. The cross upon its summit we had often visited in our holiday pilgrimages. They were holydays, when our childish feet toiled hopefully up that steep height; for that cross was the beacon that lighted the world-weary to everlasting rest.

And so we crossed the desert, over our shoetops in sand; climbing one hill after another, only to slide or glide or ride down the yielding slope on the farther side. Meanwhile the fog came in like a wet blanket. It swathed all the landscape in impalpable snow; it chilled us and it thrilled us, for there was danger of our going quite astray in it; but by and by we got into the edge of town, and what a very ragged edge it was in the dim long ago!

Lone Mountain is now topped by a campus of the University of San Francisco. The cemeteries that circled its summit were all moved to the city of Colma in the 1920s and 1930s.