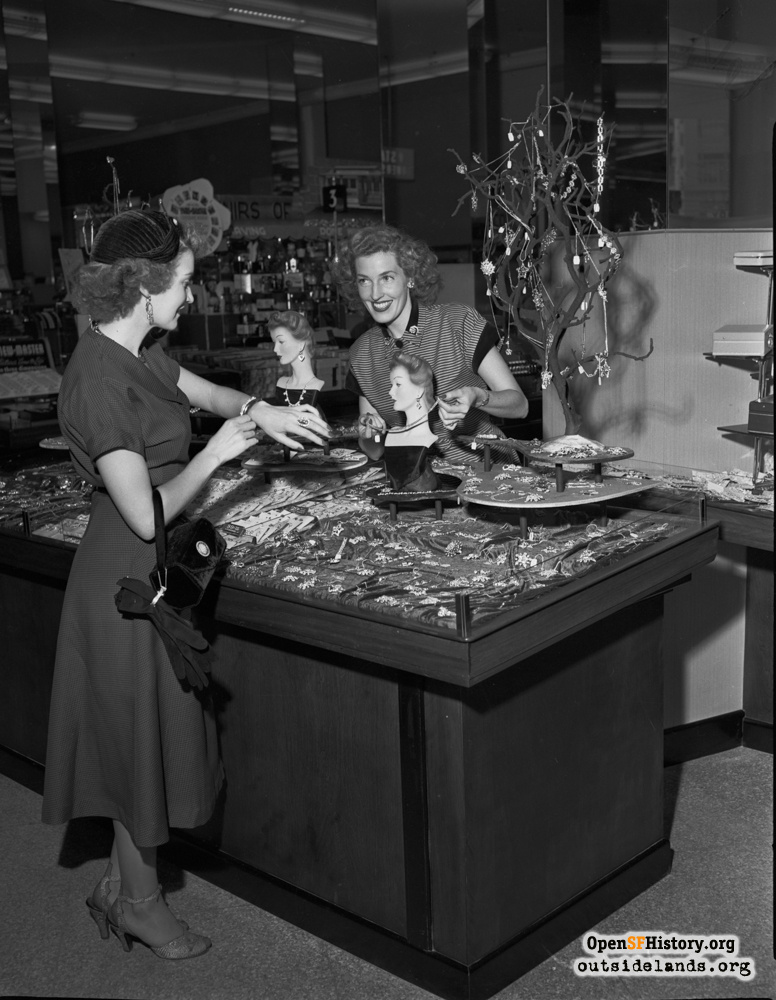 The place to get books and nifty duds that represent your love of the west side!

Don't like buying online? write us a message and we'll figure out another way. We have all these items in stock in our office. If you are local, drop by during our open hours. 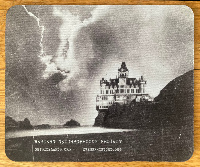 You might think computers are scary, but wait til your mouse sees this captivating and super-spooky-stormy view of the Cliff House.
It's Alive! Click on the image to see it! 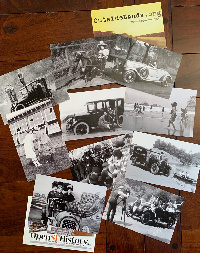 Set of 10 4"x6" postcards specially curated from our OpenSFHistory Collection featuring Women of the West Side (with a couple of east-siders thrown in) Free shipping! We want you to mail these, so get get some stamps with them! 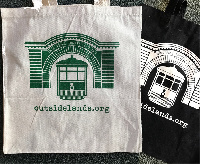 Don't like buying online? write us a message and we'll figure out another way.

Carry all your stuff and represent the West Side with this nifty tote bag with an original Twin Peaks Tunnel and Streetcar design (by Nicole's uncle!) showing the West Portal of the Twin Peaks Tunnel. (sturdy canvas... hey it's got a streetcar on it) 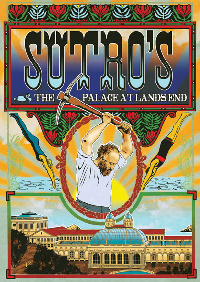 Through interviews, film footage, and hundreds of photographs, this film not only allows us to relearn and finally understand Sutro Baths' history, but also to feel and experience it. 84 minutes in length. 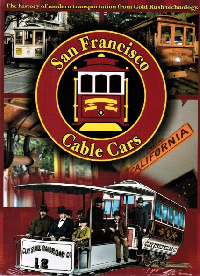 On Clay Street in 1873, the first cable car, developed by Andrew Hallidie, was successfully put into action. Over 140 years later, the cable car is still a symbol of San Francisco and the only moving national historic landmark. This film delves into that long history, how we nearly lost them, and how the cable car was saved to become a local treasure.

Books
We're proud to offer these books by local authors. 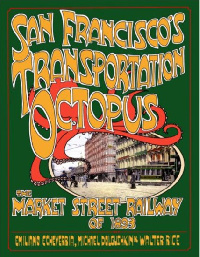 This CD E-Book contains a searchable PDF of the only history book chronicling the incredible story of the Market Street Railway of 1893. Not available in print form, this superb mix of photos, equipment rosters, and compelling text will awe you for hours, viewed on your computer. 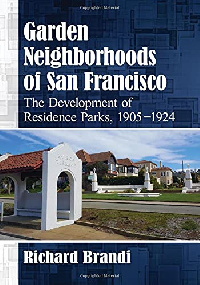 San Francisco is not known for having detached houses on picturesque streets surrounded by trees and landscaping. But between 1905 and 1924, 36 such neighborhoods, called residence parks, were proposed or built in the city. Local historic preservation expert Richard Brandi examines how developers went about the business of developing these residence parks. 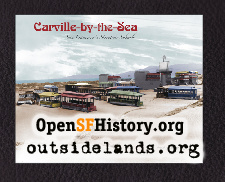 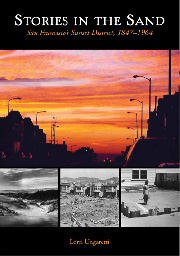 Stories in the Sand: San Francisco's Sunset District 1847-1964, is 176 pages of fascinating history, in-depth profiles of four people who contributed to that history, quotes from present and past residents, and almost 200 archival photographs. Stories in the Sand tells the little-known, colorful, and often surprising stories of people who embodied the pioneer spirit by moving into an area of San Francisco that was once considered uninhabitable, transforming it into a thriving neighborhood. 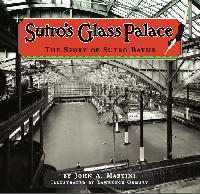 Sutro Baths is one of San Francisco's "lost landmarks." Built by Comstock millionaire Adolph Sutro as the world's largest indoor swimming complex, it dazzled visitors with its Victorian opulence when it opened in 1894. Attractions include seven swimming pools, a museum, restaurants, tropical plants, promenades, and seating for thousands of spectators. Never profitable, the Baths remained a popular destination for San Franciscans until it burned in 1966. Today, the site of Sutro Baths still attracts visitors who come explore its concrete ruins and mysterious tunnels. Sutro's Glass Palace is the fascinating story of this vanished but enduring piece of San Francisco history. lavishly illustrated with dozens of historic photographs and new artwork, this book will be popular with San Franciscans, historians, and visitors to the site. 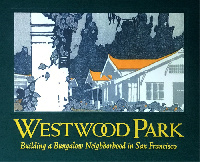 This 120-page hard cover book celebrates the centennial of the bungalow community of Westwood Park on the south side of Mount Davidson. Author Kathleen Beitiks and photographer Bruce Welch combine to share the history and the present-day character of a unique "residence park" neighborhood, complete with archival images, ads, and an illustrated index of all 667 homes. 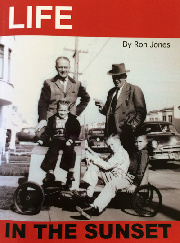 Life in the Sunset is a memoir told through the eyes of a child growing up in the Sunset District of San Francisco in the 1950's. It's a story about trying to fit in. How to be a part of the "in" group. Or outside looking in. Ron Jones is an author who has written about ecveryday heroes who enrich our lives. His classroom experiment in Fascism, The Wave has been made into a feature film. In addition to writing, Ron taught theater and sports to the physically and mentally diasbled for 30 years at the Janet Pomeroy Center. 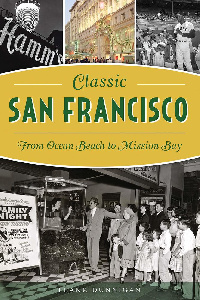 From the nostalgic days of downtown shopping and grand movie palaces to newer buildings on the skyline and stunning neighborhood transformations, change has been a constant factor in San Francisco fro the very beginning. Historian and author Frank Dunnigan showcases the old city as well as the new one gradually emerging. 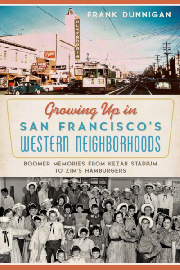 From football games at Kezar Stadium to a perfectly broiled Zim burger, San Franciscans have fond memories of the decades after World War II. In his book, Growing Up in San Francisco's Western Neighborhoods: Boomer Memories from Kezar Stadium to Zim's Hamburgers, WNP columnist and SF native Frank Dunnigan offers a charming collection of nostalgic vignettes about the thriving West side communities of unforgettable people and places that defined generations. 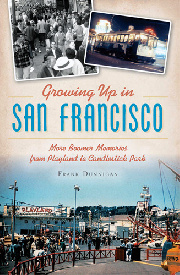 Newcomers and visitors can still enjoy iconic San Francisco with activities like riding a cable car or taking in the view from Twin Peaks. But San Franciscans cherish memories of a place quite different. They reminisce about seafood dinners at A. Sabella’s on Fisherman’s Wharf, the enormous Christmas tree in Union Square’s City of Paris department store and taking a handful of dimes to Playland-at-the-Beach for arcade games and cotton candy. In his second volume of these unforgettable stories, local author and historian Frank Dunnigan vividly recalls the many details that made life special in the City by the Bay for generations. 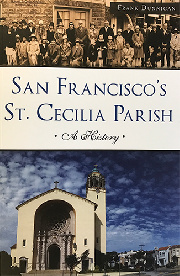 Originally housed in a two-story home and then in an old converted schoolhouse along Taraval Street in 1917, San Francisco's St. Cecilia Church today stands as a cultural pillar and architectural gem of the Parkside District. The parish continually grew to meet the demands of its members, despite the hardships brought on by events like the Great Depression and both world wars. Through years of expansions, new construction and additions, the parish remains an active gathering place for thousands of people. Local author Frank Dunnigan utilizes community remembrances and photos from dozens of different sources to tell the story of a vibrant parish that continues to live up to its motto: "The Finest, the Greatest and the Best." 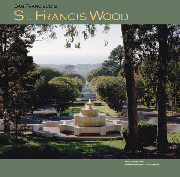 On heavily-forested land remote from downtown San Francisco, the Mason-McDuffie Company sought in 1912 to create a residence park that embodied the highest ideals of early twentieth century landscaping and architecture. Laid out by the Olmsted Brothers, St. Francis Wood attracted some of the Bay Area’s most accomplished architects including John Galen Howard, Louis Christian Mullgardt, Henry Gutterson, Gertrude Comfort, Masten and Hurd, and Julia Morgan. The 300-page, full color book tells the history of one of the country’s most successful examples of a City Beautiful “garden suburb” through historical images and stunning photographs.