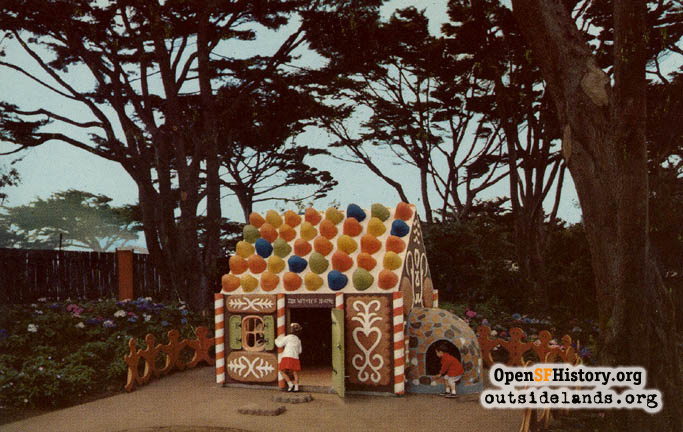 Storyland in the San Francisco Zoo

Remembering the 1950s nursery-rhyme-inspired Storyland at the San Francisco Zoo. 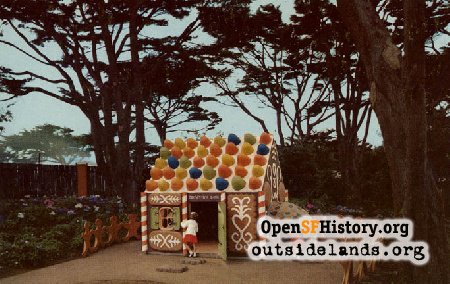 This article originally appeared in Ocean Beach Bulletin, May 2011.

In the twenty-first century the San Francisco Zoo prefers to emphasize education and conservation programs, positioning itself in a more serious and scientific way. Children are still the zoo’s target audience, but apparently today’s parents want valuable lessons about endangered species and shrinking forest habitats with their pink popcorn and penguins.

My experience, accompanying my daughter and nephews to the zoo over the past fifteen years, is that ecology lessons still can’t compete with a ride on the Little Puffer train or the historic carrousel. Both of these attractions feel like outliers, remnants of the more garish and rowdy zoo of my youth. In the 1960s and 1970s, when the main entrance was a winding descent from Sloat Boulevard and 45th Avenue, my friends and I often never made it to the animals because there was so much to see within the first few hundred yards of the gate.

The Mother’s Building was a gift shop with toy animals, pirate swords and rubber-band guns. A huge playground sprawled out to the left and a giant black locomotive engine to climb on stood over the side. Zoo trains, long strings of canopied touring cars painted in zebra or tiger stripes, were lined up on the right and the carrousel beckoned just beyond. Both of these had to wait, however, because an eccentric fairy-tale castle in between was always a priority for us. Here, with a statue of Rapunzel dangling two braided pigtails from her balcony above, was the entrance to Storyland. 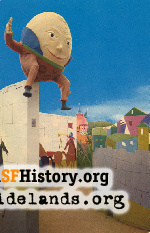 Designed by Don Clever, in partnership with architect Joe Francis Ward and landscaper Prentiss French, Storyland was three and a half acres of winding paths elaborated with buildings and statues from Mother Goose rhymes and classic fairy tales. The Rapunzel’s Castle entry set the tone. Only children could manage the low drawbridge door, while the adults had to walk around the side of it. Once inside, kids climbed up to the second story of the domicile of the old woman who lived in a shoe, and rode a standard playground slide down. Toddlers straddled the very large mice that pulled Cinderella’s pumpkin coach, but Humpty Dumpty balanced out of reach on the edge of a wall above. Alice made her trip through Wonderland in a series of murals, and it was only a bit scary to peek inside the house of Little Red Riding Hood’s grandmother and see the Big Bad Wolf wearing a bonnet in her bed.

Some of the exhibits moved a little (I believe the Big Bad Wolf head wobbled back and forth), but this was not the animatronics of President Lincoln talking to us at Disneyland. Imagination and some boxes that played recorded nursery rhymes made up most of the action. Despite the low-fi special effects, I remember it as a thrill to be able to walk through the castle, climb the shoe house, and crawl into the oven of the witch’s gingerbread house. 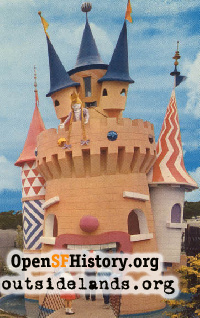 Postcard view of Rapunzel's Castle in the San Francisco Zoo's Storyland in the 1960s. - WNP Collection

Storyland opened July 25, 1959 and cost $200,000 to create, half put up by the city and the rest split between donations from Municipal Judge Francis McCarty and the estate of Herbert F. Fleishhacker. Originally it wasn’t part of the zoo, but a separate Recreation and Park Department venture – and so while the zoo was free of charge, a stroll through Storyland in the early years cost kids a dime and everyone else 15 cents. Almost 8,000 people attended on opening day and the first month’s attendance was more than 200,000. (Ward admitted the attraction had a significant problem in its opening weeks: “We’ll be putting in restrooms here on the Storyland area proper just as soon as we get the money.”)

Storyland wasn’t unique, but rather inspired by the older Children’s Fairyland in Oakland, which is still in business today. Many cities jumped on the fairy-tale attraction bandwagon in the 1950s and 1960s as fairylands, storylands and Santa’s Village parks popped up across the country.

In 1964, Rec and Park transferred the Storyland operation to the San Francisco Zoo, although it still cost extra to get in (and zoo admission soon stopped being free). By the early 1990s the fog, the ocean winds and a generation of hard-climbing children had worn the exhibits to a shabby state. The zoo, which had already begun its reinvention as a more educational than recreational destination, replaced Storyland with a nature trail. The last piece of Storyland, Rapunzel’s Castle, was torn down in 1996.

Hundreds, maybe thousands, of birthday parties took place in Storyland. How many Polaroid photos are out there of kids posing with the three bears or Jack Sprat?