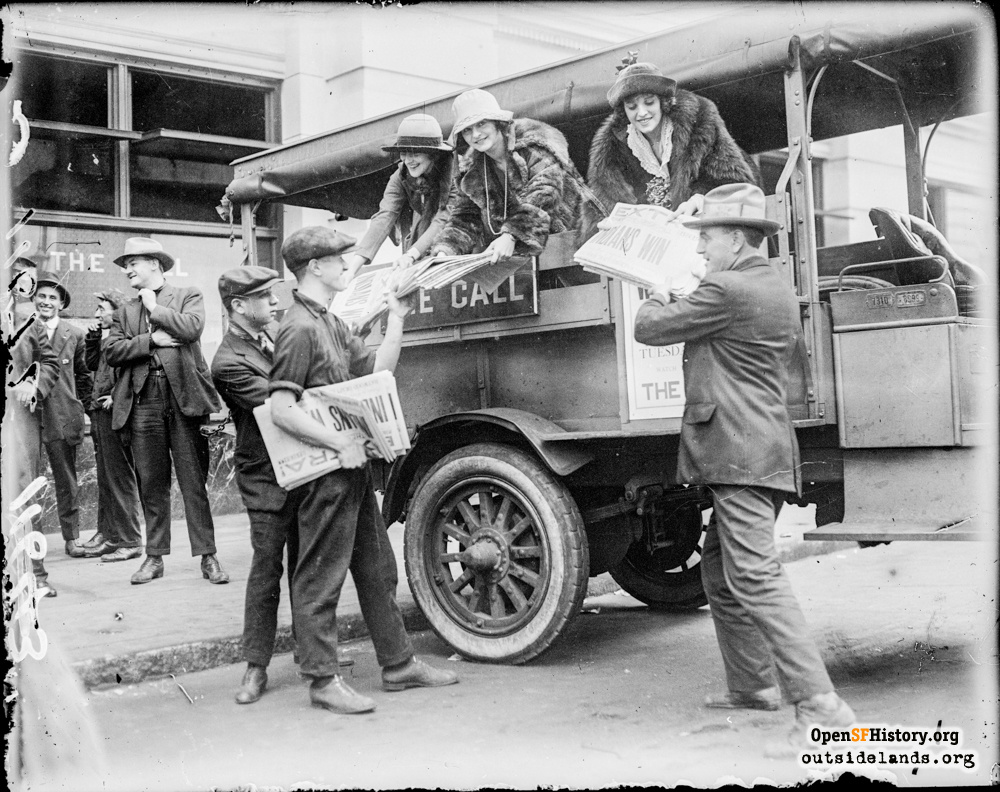 In the fall of 2008, WNP founders Woody LaBounty and David Gallagher asked if I would be interested in writing a series of articles on local history/folklore—and thus, "Streetwise" was born, making its debut as a monthly column in January of 2009. I’m grateful to have been given this opportunity, and also happy that Woody agreed to loan me the column’s name—one that he had been using for many of his own WNP articles dating back to the late 1990s.

Now, after 8+ years, the calendar tells me that Streetwise is reaching its 100th column—a good time to take a look back to see where we have been. 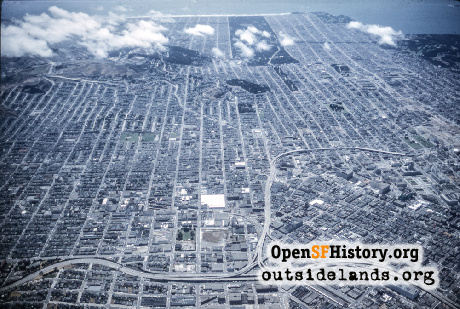 That first column recalled a bit of Western Neighborhoods history that was almost forgotten—the never-built Western Freeway—designed in the 1940s to run in a virtual straight line from San Mateo County to the Golden Gate Bridge. Thankfully, many residents, including my own father and our long-time neighbor and friend Bill Kays, made their opinions known as early members of the “Freeway Revolt."

Many stories involved what our lives were like growing up in the Western Neighborhoods during simpler times—usually in homes with just one bathroom, a single telephone in the hallway, a Formica-topped kitchen table, Mom’s set of yellow/green/red/blue Pyrex mixing bowls, the basement “rumpus” room, a single family car (parked in the garage at night—cars were rarely parked on neighborhood streets after dark until the 1960s), amidst a well-known group of neighbors and pets.

Readers have strolled along with me through the small business districts that used to line local streets: California, Clement, Geary, Balboa, Irving, Noriega, Taraval, plus West Portal, Ocean, and 19th Avenues. We’ve walked through fond memories of the often foggy outdoor Stonestown Mall that existed from 1952 to 1986, and also recalled the discount shopping center best known as GETs (Government Employees Together) that operated in 1950s/1960s at 34th Avenue and Sloat Boulevard.

Memories of long-gone retail stores have also sparked keen interest among readers. Most of us have fond memories of places such as Joseph Magnin, Bruce Bary, Roos-Atkins, Emporium, Livingston’s, Sears-Roebuck, and the White House, along with neighborhood pharmacies such as Wakelee’s on Clement Street, Reis’ at 18th and Taraval, and Bowerman’s in Lakeside Village. Other well-remembered stores included Franciscan Hobbies on Ocean Avenue, King Norman’s on Clement, and Bill’s Terminal on Market Street. Many readers also shared incredibly accurate memories of long-gone gas stations on specific corners throughout the Richmond and Sunset Districts. 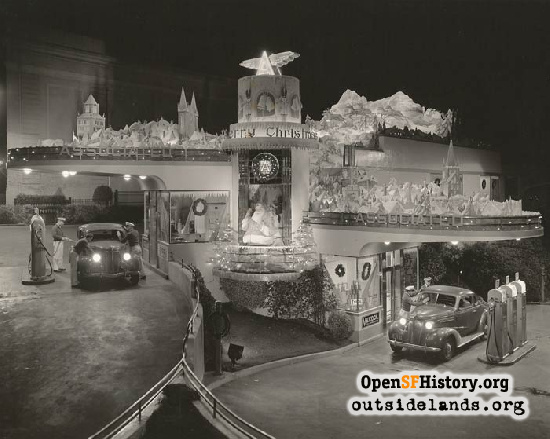 Some of these school stories led to reminiscences of recreational activities—afternoons at Playland, swimming/skating at Sutro’s, and birthday parties at the Zoo. Readers recalled annual safety patrol reviews at the Polo Field, plus Scouts, Camp Fire Girls, the snowstorm of 1962, teen club dances, garage bands, and car clubs. One topic led to another, as youthful adventures were recalled at Sigmund Stern Grove, Pine Lake Park, Strawberry Hill, “The Circle” at Sunset and Lake Merced Boulevards, plus the parking lot at the Palace of the Legion of Honor. Many now-mature baby boomers (often grandparents themselves) expressed relief that the statute of limitations had expired on a few of their own youthful evening misadventures at some of these locales. 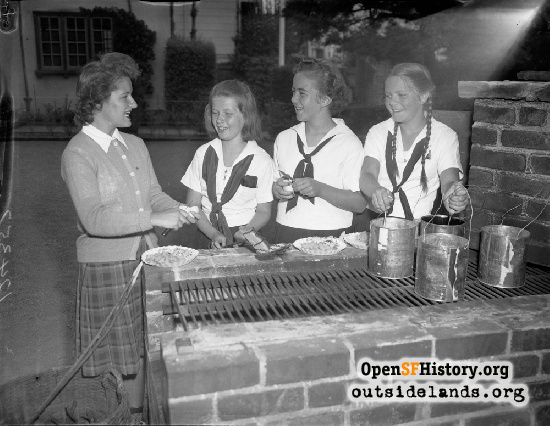 We’ve talked about religious/social events at various houses of worship, including Temple Beth Israel Judea and the nearby Holy Trinity Greek Orthodox Church on Brotherhood Way, Holy Virgin Russian Orthodox Cathedral on Geary, Holy Name Church at 40th and Lawton (fondly dubbed the “Circus Tent”), and the annual novena at St. Anne’s. Readers responded with their own recollections of fund-raisers and community gatherings, church-sponsored living Nativity scenes in Golden Gate Park, funeral practices, decades-long Bingo evenings, and various games of chance at annual festivals—including stories about how some of us had only a single pet—a festival-won goldfish brought home in a plastic bag.

When I mentioned watching Citizen Kane for the first time in the 1970s at the old Surf Theater at 46th and Irving, readers chimed in with their own movie-going memories: Saturday afternoon cartoons at the Irving Theater prior to its 1962 demolition, summer matinee programs at the Parkside, foreign films at the Bridge on Geary, and standing in line for blockbusters such as Oklahoma! and Star Wars at the Coronet. Still others recalled getting “dressed up” to see a movie at one of the many Market Street theaters, particularly the Fox, prior to its 1963 demolition. Still others had fond memories of double-feature re-runs at the Coliseum on Clement or the somewhat rowdy atmosphere that prevailed on Friday/Saturday nights at the Mission and the Geneva drive-ins, just over the county line in Daly City. Sadly, all of these places now exist only in our collective memories.

After one column about life in the working world, many readers chimed in with personal remembrances about their own first jobs—baby-sitting, delivering the Shopping News, selling in the Emporium’s old bargain basement, dipping frozen bananas into chocolate sauce at Playland, running rides at the adjacent Fun-Tier Town amusement park, waiting tables/washing dishes, or providing clerical and telephone support for one of the many downtown banks and insurance companies. It was clear that most of us began our careers at the very lowest rungs of the corporate ladder.

Those work stories led to reminiscences about first apartments—everything from basement in-law units to the high-rise towers of Parkmerced. People recalled portable hi-fis, 12-inch black-and-white TVs, plywood/concrete block bookcases, parental hand-me-down furniture, plus the inevitable gallon jug of Carlo Rossi red wine that was usually kept under the sink and then served in Cost Plus wineglasses. For those lucky enough to have owned a car, it was often a VW Bug. Most readers recalled quite clearly what their housing/utility costs were at the time, noting that acquiring a first job and a first apartment were both much simpler tasks back then vs. today. 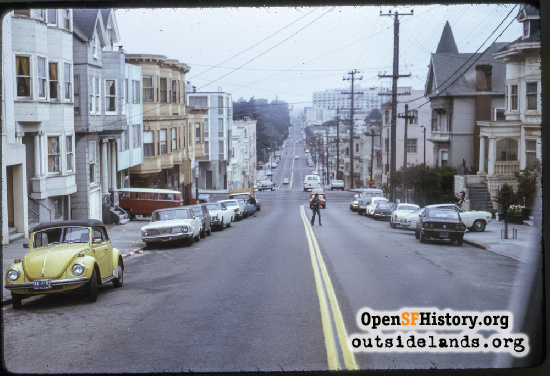 Holiday celebrations have been a perennial favorite subject, with many readers sharing their own traditions. From Thanksgiving to Christmas/Hanukkah, Chinese New Year, Valentine’s/St. Patrick’s Days, Easter/Passover, and Pride Parade celebrations, San Franciscans have historically blurred the lines of religious/social demarcation, celebrating many events with their family, friends, and neighbors.

City-wide outdoor lighting contests, roof rides at the Emporium (both downtown and Stonestown) after seeing Santa, plus a walk through the Podesta-Baldocchi floral shop, and a visit to the City of Paris tree under the dome were annual December rituals for thousands of San Franciscans. Memories of the lighted trees at McLaren Lodge in Golden Gate Park and at the old Shriner’s Hospital on 19th Avenue, the fireplace-decorated façade of the West Portal entrance to the Twin Peaks tunnel in the late 1950s, and the merchant-sponsored holiday décor strung from overhead MUNI wires throughout most city neighborhoods have all triggered warm memories for many readers.

And FOOD—how we have discussed food! Everyone maintains a personal favorite—ranging from enchiladas at The Hot House to pizza puppies sold at the old Stonestown Market, potato salad at Herman’s Delicatessen on Geary near 7th Avenue, and Thursday’s hot meatball sandwiches at Herb’s Deli on Taraval. Readers have drooled over descriptions of the original It’s-It from Playland, French onion soup at The Plum restaurant in Liberty House, and creamed spinach at Townsend’s on Geary. Any discussion of the best pizza has always included spirited comments involving the merits Pasquale’s on Irving vs. Pirro’s on Taraval vs. Toto’s in Daly City.

Bakeries seem to hold a special significance in the hearts of locals, with Blum’s Coffee Crunch cake being a repeatedly-named favorite. Other popular places from the past include Baronial on Taraval, Adeline and Fantasia on West Portal (plus other locations), the well-remembered Fosters chain, Sugar Bowl on Balboa, both Golden Brown and Robert’s on Irving, Ukraine Bakery (and their marvelous challah bread) on McAllister, focaccia at Liguria, cakes at Wirth Brothers on Geary, and Danish pastries at Eppler’s. 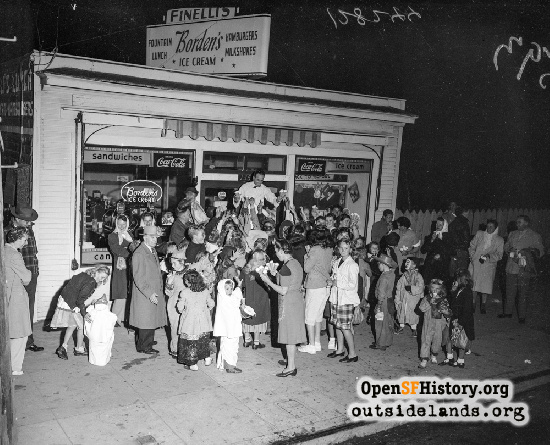 Eating out has long been important to San Franciscans, and there are still fond memories of many once-popular places that succumbed to rising rents, changing tastes, and/or owner retirements, including El Sombrero on Geary, Grisons and the nearby Hippopotamus, both on Van Ness Avenue, Bernstein’s on Powell, Caesar’s on Bay Street, Café for All Seasons on West Portal, Red Chimney in Stonestown, Ernie’s Neptune Fish Grotto and Villa Romana on Irving, the dozens of Zim’s locations (particularly 19th and Taraval), Woolworth at Powell and Market, the hof brau-style restaurants that used to dot the downtown area, and many others. At least the Doggie Diner is commemorated by the iconic polystyrene head with a bowtie and chef’s cap, mounted on a pole in the center island of Sloat Boulevard near 45th Avenue.

Over the years, one of the column’s most faithful and eagle-eyed readers has been Paul Rosenberg, life-long Richmond District resident, Lowell and Cal-Berkeley grad, and long-time observer of City Hall politics. With an encyclopedic memory (and some pretty extensive paper files, too), he has provided clarification and correction on a wide variety of topics, including schools, candidates for elective office, ballot measures, and more local political trivia than most of us could even imagine. An early member of the Irish-Israeli-Italian Society, he has given many luncheon talks over the years—"A Madcap Romp Through San Francisco Politics"—offering history, scandal, and witty remarks that evoke laughter, nostalgia, and humorously wry comments among audience members every single time Paul stands at a podium.

Many Streetwise followers, including John Freeman, Monsignor Michael Harriman, Christine Meagher Keller, John Martini, Jack Tillmany, and Grant Ute, have provided WNP with numerous scanned photos from their own family, school, and parish collections—images that have immeasurably enhanced the stories being told in each month’s column, while often leading to many brand-new topics. Also, the anonymous donor who contributed tens of thousands of vintage San Francisco images which are now being scanned by WNP volunteers under the name OpenSFHistory, has been another significant contributor. To all of you, many thanks!

Sadly, many readers/friends have left us over the years, including Will Connolly, Frank Grant, Rosemarie (Rosie) Marshall Green, Annabelle Marsh Piercy, Karyn Ann Salisbury-Bosso, and others. Their shared memories are still part of our collective history of message boards and articles.

Finally, a big thank you to Woody for encouraging me to develop three books of local history that have been published by The History Press, based, in part, on some of these Streetwise columns—and yet another word of thanks to both Woody and David for stocking autographed copies of these books in the WNP store, along with many other great gift items that recall our treasured memories of growing up in San Francisco.

Please chime in, dear readers, on what has been overlooked thus far, now that we are moving onward to the next 100 columns!