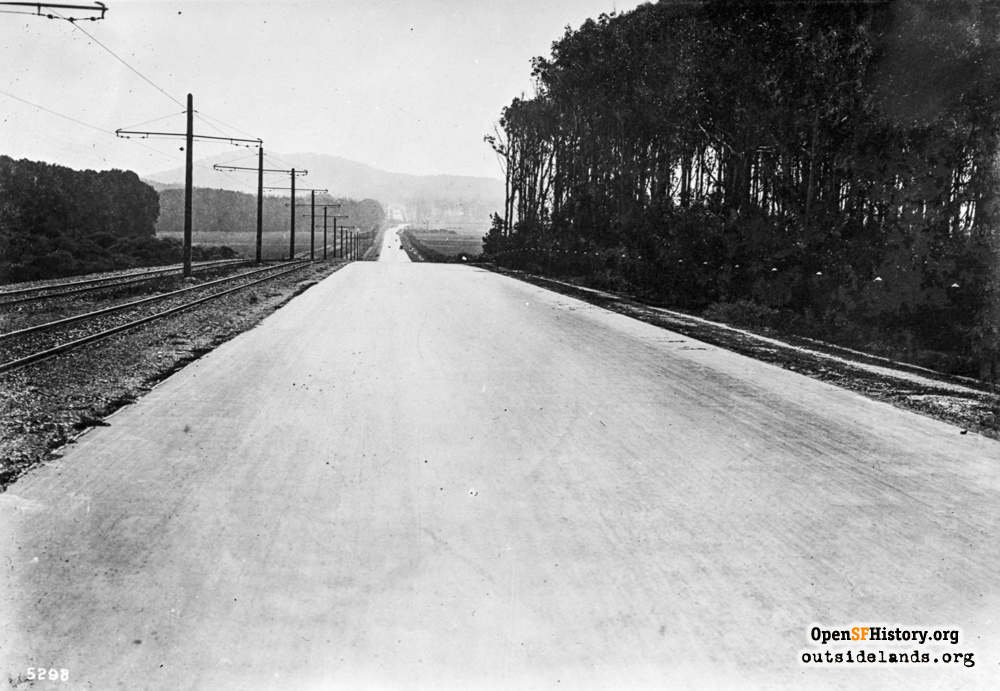 Streetwise: Looking Back to 1918

Streetwise: Looking Back to 1918

As we approach a new year, it’s time to take a look back at people, places, and events that existed in San Francisco 100 years ago. In some ways, the city bears certain similarities to what existed in 1918, though it is also a very different place now.

AUTOMOBILES—The sale of automobiles in San Francisco increased significantly after the 1915 Panama-Pacific International Exposition. Drivers' licenses were first required in California only a few years earlier, in 1913. 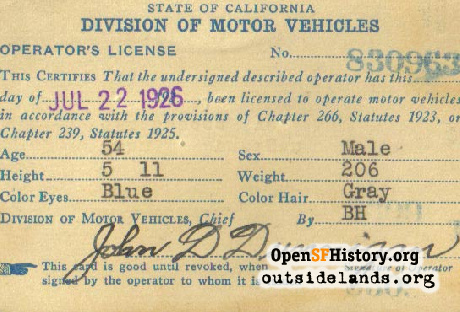 CIVIC AFFAIRS—James Rolph was just six years into his 19-year term as Mayor (1912-1931). Many post-1906-Fire civic infrastructure programs, including schools, libraries, parks, reservoirs, public transit, and many new miles of paved streets came about during his administration.

The San Francisco Public Library was expanding as the Sunset Branch at 18th Avenue and Irving Street opened on March 25, 1918—the system’s eighth location. 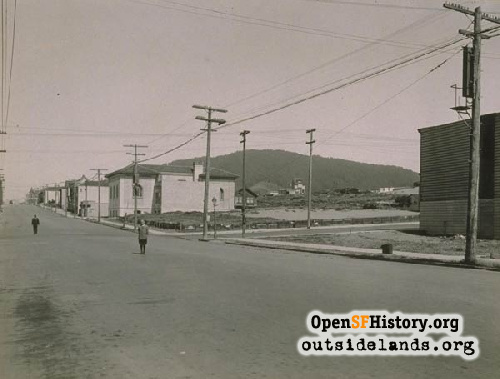 COMMUNICATIONS—With no TV, radio, or audio newsreels, San Francisco was an active five-newspaper town in 1918. Michael de Young’s Chronicle was a somewhat conservative newspaper that vied with William Randolph Heart’s slightly more progressive Examiner for morning circulation. Afternoons were the domain of three separate newspapers: the Call & Post (resulting from a merger of two separate newspapers five years earlier), along with the Bulletin and the News. 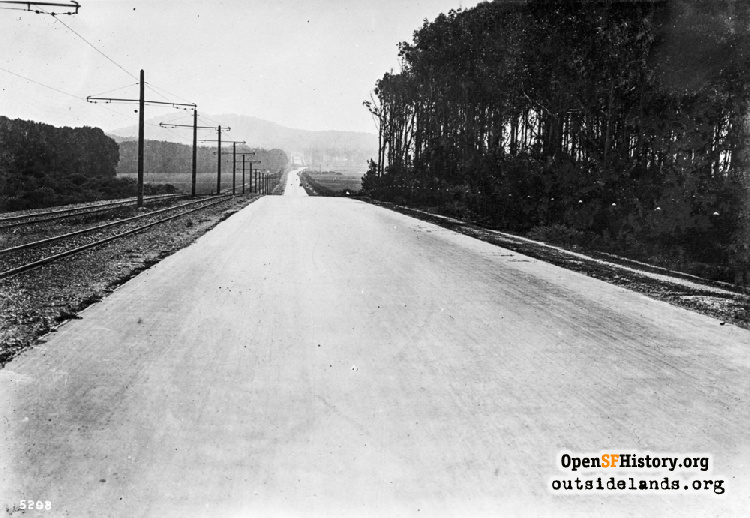 ENTERTAINMENT—In March 1918, silent film star Mary Pickford began filming a comedy, Amarilly of Clothesline Alley, in San Francisco. So great were the crowds ogling to see “America’s Sweetheart” that filming had to be moved to Los Angeles, with replicas created for many buildings included in the local footage.

The 1918 City Directory listed 72 “Moving Picture Theatres.” The Coliseum on Clement Street opened to great civic fanfare in November 1918, with a silent Mary Pickford film, a Mack Sennett comedy, and a newsreel. Sound was added in 1929.

Although radio technology existed in 1918, home radio sets were not then in use. Regularly scheduled broadcasts did not begin until April 1920, when a number of Bay Area stations began daily programming. Early shows were limited to vaudeville-type fare: music, singing, stand-up comics. News, weather, sports, and situation comedy/drama programs remained far into the future.

FIRE PROTECTION—The San Francisco Fire Department (SFFD) began converting to motor-driven engines just five years earlier, in 1913. The last fire horse was purchased in 1911, and horses continued to work alongside their motorized replacements until the last horse retired in 1921.

HEALTH CARE—The first influenza case was reported to San Francisco health officials on September 23, 1918. By October 9, that number jumped to 165 and a week later the count exceeded 2,000. Schools, theatres, and dance halls were closed, and employees in direct customer-contact positions (hotel clerks, restaurant servers, bank tellers, druggists, store clerks, etc.) were required to wear masks. Even Mayor “Sunny Jim” Rolph was cited by his own Chief of Police for appearing in public without a mask. By the end of October there were more than 20,000 cases reported in San Francisco, resulting in more than 1,000 deaths. The situation slowly began to improve and on November 21, the mask requirement was dropped. Sadly, an uptick in new cases occurred, and the use of masks was again recommended in early December. By early January 1919, hundreds of new influenza cases were reported, and the Board of Supervisors passed new legislation requiring masks. By spring, San Francisco had recorded nearly 45,000 cases of influenza, with a death toll of more than 3,000 residents—ironically, the same number of deaths that were ultimately confirmed for the 1906 earthquake and fire disaster.

The Affiliated Colleges on Parnassus Avenue officially became University of California Medical School in 1915, with a one-year dental program added in 1918.

HOUSING—The western neighborhoods were still largely undeveloped, and many city residents were hotel dwellers in the Tenderloin, Mission, and Western Addition. There were nearly 1,000 hotels listed in the 1918 City Directory, ranging from the upscale St. Francis to decidedly more modest establishments in many neighborhoods.

LAW ENFORCEMENT—At the end of 1918, the San Francisco Police Department had approximately 930 officers vs. more than 2,000 today.

The 1918 San Francisco City Directory lists more than 1,500 businesses under the heading “Liquor-Retail.” On November 18, 1918—ironically, just one week after the World War I armistice was signed, and prior to ratification of the more restrictive Eighteenth Amendment in 1920, Congress passed the temporary Wartime Prohibition Act. Reports from that era indicate that this new law was largely ignored by both the people and the local police.

LOVE & MARRIAGE—In May 1918, George and Alma Gisin, in their early twenties, were married at Mission Dolores in a temporary wooden structure facing 16th Street. The new church at 16th and Dolores Street, intended to replace the 1876 brick structure that was lost in the 1906 earthquake, was not completed until that December. The young couple and their parents traveled to and from the ceremony by taxicab, while most of the other guests walked or took a streetcar. In keeping with the times, the wedding reception was a simple lunch at the home of the bride’s parents on Duboce Avenue. It was attended by a small group of about 30 guests—virtually all of whom were related to one another by blood or marriage. The newlyweds, a firefighter and a schoolteacher, lived happily ever after. Today they have many descendants, including a daughter now approaching age 94, and several great-great-great-grandchildren. 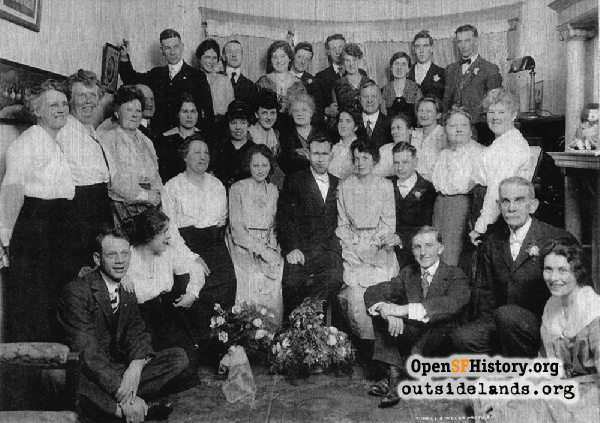 The San Francisco Playground Commission voted to name the south half of Jefferson Square “Margaret Hayward Playground” in honor of one of its founding members who died in 1918. It was the first local civic facility named for a woman.

In 1918, the San Francisco Seals baseball team played at Recreation Park on Valencia Street between 14th and 15th Streets, as Seals Stadium was not built until 1931.

Prior to the 1920s, very little clothing was sold “off-the-rack”—instead, both men and women could select fabrics for custom-made garments at the Emporium and/or one of more than 600 local independent tailoring shops.

Grocery shopping was a daily chore for those who kept house, with many small neighborhood stores located within walking distance. The 1918 City Directory contains nearly 2,000 listings for “Grocers-Retail,” with many additional pages of other merchants that had to be visited regularly, including:

In February 1918, streetcar service through the Twin Peaks Tunnel commenced. Originally providing service only on the K-Ingleside and L-Taraval lines, this opened up a vast new area for development. Until then, the primary route to the Sunset District was the #17 streetcar line which commenced in 1916, running from the Ferry Building to 19th Avenue and Wawona Street, including a north-south segment on 20th Avenue from Lincoln Way to Wawona Street. The L-line originally followed a path along Taraval as far as 33rd Avenue, with tracks to Ocean Beach (and eventually to the Zoo) added several years later.

By 1918, horses were disappearing from the transportation scene, though smaller businesses continued to use them for delivery wagons until the 1930s. The last horse-drawn San Francisco streetcar rolled up Market Street just five years earlier in 1913.

Electric streetcars were gradually taking over from cable cars because electric lines were less costly to build and operate. In 1918, there were still eight cable lines operating, including the California Street Cable that ran all the way to Presidio Avenue (cut back in 1956 to Van Ness Avenue) and the Castro Cable from 18th Street in Eureka Valley to 26th Street in Noe Valley until its closure in April 1941.

Passenger and auto ferries continued to crisscross the bridge-less bay prior to construction of the Dumbarton Bridge in 1927.

WORSHIP—Christmas 1918 marked the dedication of Mission Dolores Church (named a Basilica in 1952) adjacent to the small Mission. The previous church, an imposing red-brick structure built in 1876, was severely damaged by the 1906 earthquake and could not be saved, though the adjacent Mission survived with little damage. Construction of the new church began in 1913 and took five years to complete.

Temple Emanu-El, the onion-domed synagogue built in 1866 at the site of today’s 450 Sutter Medical-Dental Building, was severely damaged by earthquake and fire in 1906. The congregation was able to restore the building for services by 1907, though the original domes were not replaced. By 1918, plans were being developed for a new temple at Arguello Boulevard and Lake Street that was completed in 1926.

St. Cecilia Church in the Parkside District had just opened in 1917, after being built from a remodeled wooden Parkside School building donated by the city and located amid sand dunes at the northwest corner of 15th and Taraval even before the tracks of the L-line streetcar were laid.

ZOO—Golden Gate Park exhibited several animals including bears, sheep, monkeys, and bison, but an official zoo was not established in San Francisco until 1922.

While much has changed in today’s city, we can be very grateful for all that remains.