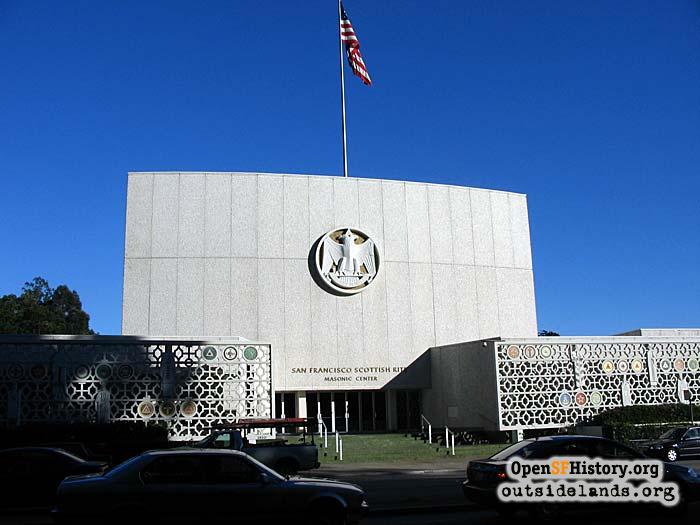 Streetwise - Everything Old is New Again

Streetwise - Everything Old is New Again

Between late 2012 and early 2014, four large educational/fraternal/religious organizations in the Outside Lands are celebrating fiftieth anniversaries for their facilities. Each group has undergone major changes in the last fifty years, while remaining active in serving local community needs.

Ironically, many of us still refer to these four places as “the new…”:

Lowell began its life in 1856 as the Union Grammar School, and in 1894 was renamed to honor poet James Russell Lowell (1819-1891). The school was spared the flames of the firestorm which destroyed so much of the city after the April 18, 1906 earthquake, its Sutter Street site located west of the successful firebreak at Van Ness Avenue. Lowell's reputation for academic excellence attracted such large numbers of students that the old campus had become inadequate. and, in 1908, San Francisco voters approved a bond issue for construction of a “new” Lowell, which opened in 1913 on Hayes Street, between Ashbury Street and Masonic Avenue.

By the 1920s, overcrowding again became a concern, but plans for the school’s expansion/relocation were delayed by the Great Depression and World War II. During these years, Lowell’s reputation as a public “college preparatory” institution was firmly established. After much research, a new site was selected near Lake Merced, and construction commenced on a $5 million dollar facility that opened in the Fall of 1962, with the first graduates receiving diplomas in January 1963.

Strange as it may seem today, there was once organized opposition to Lowell’s non-districted, “academic” status. At the time of the move, the San Francisco Board of Education, by an decisive 6-to-1 vote before more than a thousand attendees at a public hearing, reaffirmed Lowell’s status as the city’s academic high school, though eliminating ninth grade, creating a three-year institution.

By 1966, overcrowding again became an issue as the school had an enrollment of more than 2,000 students. Thereafter, incoming students were required to have a certain grade point average for admission, and by 1968, modifications were made to the traditional seven-period school day, most of which remain in place today.

The issue of a non-districted, academic high school was challenged by a lawsuit filed in 1971, alleging discrimination in Lowell’s admission policies, with a Federal District judge ruling in 1972 that the constitutional rights of the plaintiffs had not been violated. The outcome was that the affirmative action component of Lowell’s admission criteria was validated, and henceforth, there would be identical admission requirements for both female and male students. Subsequent to this, the ninth grade was restored, temporarily swelling the student enrollment to 3,400, and necessitating a temporary “south campus” located at San Francisco State University. Within a few years, the school population was reduced to a more managable 2,800. The school’s recent 60:40 female-to-male ratio seems to demonstrate that girls, at least based on standardized admission criteria, are notably ahead of boys.

Today, Lowell remains the oldest public high school west of the Mississippi, the recipient of multiple awards for academic excellence, with a culturally diverse student body of 2,680, virtually all of whom attend college, and a large, active, and distinguished alumni association.

Freemasonry and Masonic lodges trace their origins to the Middle Ages when masons constructed stone buildings. Because of the physical danger of working in this enterprise, many individuals formed benevolent societies to care for sick or injured workers and the survivors of deceased members, particularly those killed on the job. The first Grand Lodge was established in London in 1717. The practice soon spread across Europe, and eventually to the American colonies, where the first lodge was established in Boston in 1733. Over time, the lodges evolved into fraternal organizations rather than trade guilds. 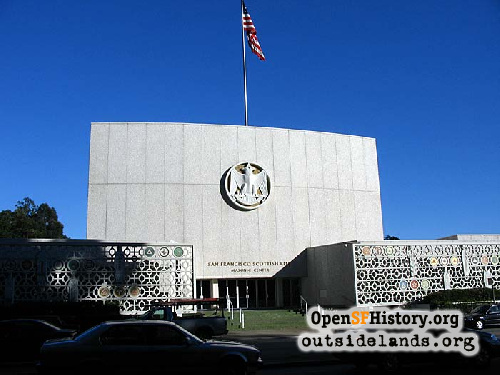 During the California gold rush, Masonry reached United States' west coast with the founding of a lodge in Sacramento in 1850. Today, there are more than 60,000 members and 340 lodges throughout the Golden State. In spite of the perceived image that the organization consists only of the elderly, about 2,000 Californians join each year, at an average age of 39.

Masonic lodges have long prided themselves for their members’ financial support of public education in three areas:

The organization also operates residential facilities for elderly members, and provides outreach services to youth who are experiencing behavioral or mental health issues.

The Shriners, an associated group within Freemasonry, promotes “fun and fellowship in addition to philanthropy.” The Shriners—distinguished by a red hat known as a fez—are noted for establishing and supporting rehabilitative hospitals for children, relying on their annual East-West Shrine football classic, circus presentations, and golf tournaments for fundraising. In 1997, their Sunset District red-brick hospital on 19th Avenue at Moraga Street, built in 1922-1923, was sold to an investor group that converted it into a private retirement community. The Shriners' local childrens healthcare services were relocated to more modern facilities in Sacramento adjacent to the UC-Davis Medical Center.

While all these groups remain fraternities—associated chapters are women-only and other affiliates include both men and women—they are not specifically religious organizations, other than the requirement that all Masons must profess belief in a Supreme Being. Most chapters, in an effort to be more inclusive to the non-member community, now refer to their facilities—once called temples—as auditoriums or “Masonic centers.”

The 19th Avenue and Sloat Boulevard facility, opened in 1963, replaced smaller venues once located throughout the city. The building boasts one of the largest stages in San Francisco, with more than 2,000 square feet of performing space and a seating capacity of over 750, and offers ample underground and on-street parking. Kitchen and banquet facilities can accommodate 450 people for sit-down meals and receptions, and all the facilities may be rented to non-member groups for public and private functions, as the organization considers community service to be one of its primary goals.

Beth Israel has a long San Francisco history, dating back to the days of the Civil War. Founded in 1860 as a strict Orthodox congregation, its first building was in downtown San Francisco on Sutter Street, near Stockton Street. Following the westward migration of its members, the temple moved to 1839 Geary Street by the early years of the twentieth century. Destroyed by the 1906 Earthquake, the temple was rebuilt and opened in 1908 as members aligned themselves with the less strict Conservative movement of Judaism. The temple drew a large membership from throughout the bustling Fillmore District.

Temple Judea, a more liberal Reform congregation, began in the Westlake District of Daly City in 1953. Originally meeting in homes, the congregation moved in 1963 to a new, permanent facility on San Francisco’s Stanley Drive, later renamed Brotherhood Way in recognition of the many houses of worship there. Temple Judea was the first new Reform synagogue built in San Francisco in almost 125 years and reflected contemporary architectural design.

By 1969, the redevelopment of the Fillmore District and steady movement out of the area by Beth Israel’s congregants, led to a merger with Temple Judea. Acknowledging slightly different traditions in each congregation, the merged Beth Israel-Judea has created “a unique synthesis of traditional ritual and contemporary Jewish practice” (according to its Web site) that is all-welcoming, including those with interfaith marriages and other interpersonal partnerships. The merged congregation embraces the new, with Reform services on Friday nights, while Saturday morning worship remains more Conservative-leaning. Whenever there is a conflict in established rituals, there is generally an accommodation made for the more traditional—such as maintaining historical dietary standards for food service in the kitchen/banquet areas, regardless of which internal or external group may be using the facilities.

For its youth programs, Beth Israel-Judea utilizes new classrooms at the adjacent Brandeis-Hillel Day School which operates independently (Brandeis was first founded exactly fifty years ago in 1963). Brandeis-Hillel’s design for its new building reflects the concept of sharing the premises with others—such as reversible instructional boards with the school’s information on one side, and data specific to Beth Israel-Judea members on the other.

Today, serving hundreds of families from San Francisco and the northern Peninsula, Beth Israel-Judea remains a vibrant part of the Western Neighborhoods.

As a sidelight, the old Beth Israel building at 1839 Geary was purchased by artist Tony Duquette in the 1980s and rehabbed into an art studio with a magnificent sunburst window. Sadly, the building was destroyed in an electrical fire in February 1989. Its neighbors included the legendary Fillmore Auditorium to the east and an old Scottish Rite building to the west (1859 Geary) that was once home to the infamous Peoples Temple. While the Fillmore Auditorium lives on, 1839 & 1859 Geary were demolished in 1989, replaced with nondescript structures.

Construction of the modernistic edifice at 39th Avenue and Lawton Street, opened in April 1964, was a complicated task that posed both architectural and engineering challenges, and was quickly dubbed by some as “the circus tent.” 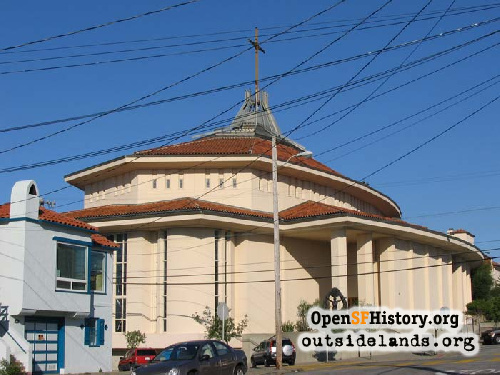 Holy Name parish, founded in 1925, served the Catholic community of the area for many years with a church building constructed in 1940 at the corner of 40th Avenue and Lawton Street. With an adjacent school, convent, and rectory clustered together on the same parcel of land, the Post-World War II baby boom and increased homebuilding in the Sunset District began to strain the capacity of the small church.

Opportunities for a new church structure were limited by the placement of the existing buildings and the lack of additional land nearby. Demolition of the existing church was rejected as an option, as it was still needed for services, was barely twenty years old, and had recently been paid off. After exploring many alternatives, it was finally decided that the rectory, then facing Lawton Street between 39th and 40th Avenues, would be moved eastward several hundred feet to the northeast corner of 39th Avenue and Lawton. In order to accommodate this move, the parish purchased four homes (three on 39th Avenue and one on Lawton) from the owners for what was termed “a fair price”—though there seems to be no indication of how the owners felt about these transactions! The moving of the rectory commenced in January of 1962—just as a ferocious winter storm hit Northern California—and was completed in about three months. This move then left a large open parcel at the northwest corner of 39th and Lawton as the construction site for the new church.

Given the dictates of the Second Vatican Council, then in session in Rome, plans called for the layout of the new church to reflect closer proximity and participation between clergy and congregation. Gone were the long middle aisles of the past, when those in the back row were barely being able to see or hear what was going on down front. The new plan called for an oval-shaped building, with a semicircle of pews surrounding the altar, and the priest facing the congregation—the first Catholic church in San Francisco to be constructed to these new standards. The dedication of the new facility was held April 5, 1964.

A gradual decline in Holy Name’s elementary school enrollment, from 900 to just 500, provided a unique opportunity for the parish. Led by Director Alice Ho Seher (herself a Lowell grad with degrees in Early Childhood Education and the mother of three Holy Name alums who are now in college), a preschool was opened in January 2012, providing a much-needed neighborhood amenity for working parents, plus an easy transition for the 45 currently-enrolled children into the parish’s elementary school.