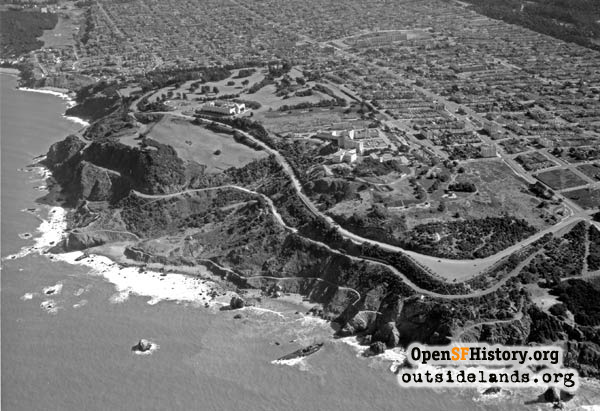 Streetwise - A Life of Active Duty

Fort Miley, the VA, and the story of one west side veteran.

Streetwise - A Life of Active Duty

I became a first-time father at age 49, when I was presented with a 77-year old son—actually an elderly cousin—when his last close relative passed away and there was no one else to look after him. He represented the final chapter in the history of a Richmond District family and its association with that quiet neighborhood institution named Fort Miley.

As far back as 1850, land on the northern-western tip of San Francisco had been set aside for military purposes and coastal defense. Shortly after the Civil War, the city claimed 200 acres in the area for the Golden Gate Cemetery (no connection to the San Bruno cemetery of the same name) where many Chinese residents and also the local poor were buried.

By 1893, total burials in Golden Gate Cemetery numbered 18,000, mostly in the area near the present Palace of the Legion of Honor. Cemeteries, however, were no longer considered a good use of land in an expanding city. By 1909, burials ended, and 150 acres were turned over to the city’s Park Commission, with the remaining 50 acres returned to the government, including the land for Fort Miley.

During World War I, Fort Miley grew to more than 60 buildings. After the war, the large parade ground, with its spectacular view of the Golden Gate, was designated as the location for a new Veterans’ Hospital (the area around Pine Lake was an alternate site). The hospital was built in 1933-34, with the U.S. Army retaining much of the surrounding land.

In early 1942, patients were evacuated for the duration of World War II, and the military expanded its coastal defenses. The hospital reopened in 1946, and the last gun emplacement was removed in 1949, thus marking the end of the site’s original purpose. The Veterans Administration, the "V.A.," has now been carrying out its mission of caring for America's veterans quietly amid the fog and the trees for more than 80 years. 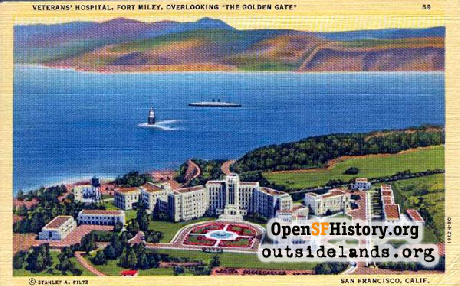 Meanwhile, my cousin Ray was born in 1924, one of three sons in a Richmond District family, and we shared a set of great-grandparents. He spent most of his life growing up on 43rd Avenue at a time when every block in the neighborhood was filled with school-age children. (How things have changed—the San Francisco Chronicle reported recently that there are now more dogs than children in San Francisco, with each category represented in 12% of city households—but kids used to be a full 25% of the population, often outnumbering the adults on many blocks in the western neighborhoods.)

Ray attended St. Monica School, and moved on to Lafayette when his mother, herself a teacher in the San Francisco Unified School District, believed that he would be better off outside the shadow of his two high-achieving brothers. While his siblings thrived in the structured environment of Catholic schools and later at University of California, Berkeley, Ray had academic challenges, but quickly made friends at both Lafayette and later at Washington High School, from which he graduated in 1942.

All three brothers enlisted in the military that year, and while his brothers wrote home regularly, the family heard little from Ray. Their parents kept the small red banner with three blue stars arranged vertically on a field of white, hanging in the front window, awaiting the return of their three sons. This bit of family history now resides in my bookcase. By early 1946, with the war over, the family was reunited on 43rd Avenue.

While his brothers finished up their degrees at Berkeley and began going out on job interviews, Ray remained quiet and reclusive. When one brother became an engineer at Bechtel and the other embarked on a lifelong career with the federal government, their parents were pleased, yet concerned that Ray continued to putter around the house, and take endless daily streetcar rides, just looking at things and talking to people. He held a few entry-level jobs, but never seemed to click at any of them.

Ray’s parents urged him to contact the VA for help in his job search. It was there that doctors made the diagnosis that Ray’s assignment as a Pharmacist’s Mate working with the injured had resulted in serious setbacks for someone already facing academic and emotional challenges. Learning disabilities that were only guessed at by close family members were officially confirmed, and the VA concluded that Ray’s employment prospects were limited. He spent considerable time undergoing treatment at a Southern California VA facility, yet his mother, the schoolteacher who always sought out the best in every pupil, was not going to rest until her middle son was embarked on a productive life. Encouraging him to keep up his contacts at the VA once he was home, Ray walked up the hill one cool, foggy morning in 1957, and volunteered his services—a short walk that became the start of his new life. 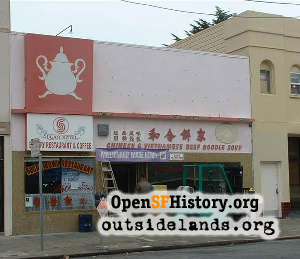 For more than 40 years, he remained a steadfast volunteer, covering shifts that others did not want. Rain or shine, he was the smiling face distributing newspapers and magazines, wheeling patients from one building to another for testing/treatment appointments, and helping visitors navigate the sprawling facility. Even on his time off, Ray was there, bringing patients treats from the Sugar Bowl Bakery on Balboa Street or simply chatting with them. He also enjoyed taking people out for rides in his dream car—an old 1940 undertaker’s limousine that he bought for $100 in 1957. It was a classic piece of automotive history, complete with a dashboard-mounted cigarette lighter that could stretch all the way to back seat, and Ray delighted showing his VA buddies around town and taking all of us younger cousins out for rides, especially when gasoline was just 25 cents a gallon.

When his mother passed away at age 93, Ray, then nearly 60 years old, acknowledged that he was not capable of living in the family home on his own. It was then that the miracle of “payback” occurred. Ray had just been cited by the VA for performing an incredible 10,000+ hours of volunteer service, and realizing his personal circumstances, the VA found a place for him in a supportive group home in the Ingleside.

Once settled in, Ray continued his volunteer duties, even though each trip to Fort Miley then involved several Muni transfers (K-Ingleside to Forest Hill Station, 10-Monterey to Geary Boulevard, and the 38-Geary the rest of the way). Having grown up on 43rd Avenue, he knew the history of Fort Miley as an army installation, and possessed an encyclopedic knowledge of how the place had developed, building by building—intricate little details that he loved to share with others.

Eventually, Ray’s health declined, and he was forced to move into Fort Miley’s long-term care unit, in a room overlooking his family’s old home. Even then, he was still able to get around in a wheelchair and interact with other patients—an activity that was supported by the staff. Ray proudly wore his volunteer award pin on his bathrobe as he continued with his “duties.”

The unexpected death of his last brother produced concern at the VA—who was his next closest relative? There were no nieces or nephews, and all of his first cousins, then in their 70s and 80s, lived a considerable distance away. This question was resolved in his late brother’s will, when much to my surprise, I was named Ray’s legal guardian. For the remainder of his life, the staff at Fort Miley included me in monthly staff meetings, to keep me informed about every aspect of Ray’s treatment. The care he received was nothing short of exceptional and far superior to anything available in the best of private institutions.

My cousin Jean, a retired registered nurse, and childhood friend of Ray’s, helped with the transition. Coming from her home in remote southern Alameda County, I would meet her at Daly City BART, and we then spent the day visiting Ray. With her uncanny instincts about our cousin, she helped him select clothes from a catalog—for years, his daily uniform had been a fresh hospital gown and bathrobe after his morning shower. With a few shirts, pants, and sweaters available, the staff and volunteers were able to persuade him to get “dressed up” in order to go out with us, and he was clearly pleased at this new activity.

One drizzly fall day, we were meandering along Great Highway when Ray suddenly gave a minute-by-minute monologue of a visit that he and his Washington High classmates made to Playland some 60 years earlier. His recall was incredible, naming which rides were adjacent to which, the sounds and smells of the midway—things like the repeating carnival music and the popping of balloons, the maniacal cackle of Laughing Sal and screams from the Big Dipper roller coaster, plus the caramel popcorn aroma and the pungent graphite smell around the bumper cars.

Another time, we rode around Lake Merced and back up Sunset Boulevard, stopping at an Irving Street deli for sandwiches. We then parked near the Music Concourse while we ate, and Ray smiled as he recalled childhood visits to the nearby Steinhart Aquarium, remembering such minute details as the bronze seahorses on the barrier above the crocodile moat. He even repeated comments that his long-gone grandparents had shared with him, about how they had come to this very spot in a horse-drawn carriage around 1899-1900, to attend Sunday concerts when his mother was a little girl. 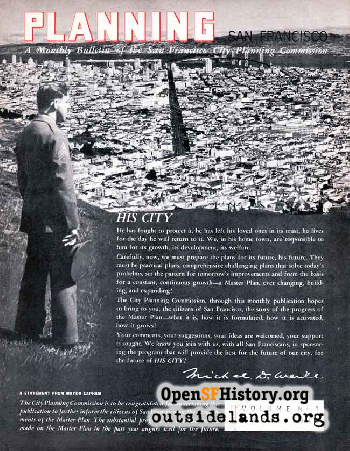 On the morning of September 11, 2001, with the world in turmoil, I arrived at Fort Miley to find Ray wheeling himself from room to room, asking fellow patients simply, “Are you OK? Do you need to talk?”

Ray slipped away quietly soon after one of our excursions, and many of our far-flung cousins came back to San Francisco to say good-bye. What amazed all of us was the excellent and compassionate care that Ray had received from the staff and volunteers at Fort Miley—a place that none of us had truly known before.

Among his few possessions were two letters that he had been saving—both were placed in the casket with him—and I read the words aloud at his funeral. The first was written to every discharged U.S. Navy veteran by Secretary of the Navy James Forrestal in 1946:

You have served in the greatest Navy in the world.

It crushed two enemy fleets at once, receiving their surrenders only four months apart.

It brought our land-based airpower within bombing range of the enemy, and set our ground armies on the beachheads of final victory.

It performed the multitude of tasks necessary to support these military operations.

No other Navy at any time has done so much.

Ray had long ago circled the next two sentences:


For your part in these achievements, you deserve to be proud as long as you live. The Nation which you served at a time of crisis will remember you with gratitude.

The other was a hand-made valentine, part of a package sent to Fort Miley residents by students at St. Monica School. It read simply:

Dear Veteran, Thank you for what you did because you helped me to be here today.

It’s been a long time since those red-and-white banners with the stars were hanging in the windows of so many homes across this country. Today, as the last World War II vets take their final leave of us (and as we also commemorate the end of World War I exactly 95 years ago), it is important to pay tribute to all those whose service ensured that all of us could be here today—just one more thing for which we can be thankful this November.