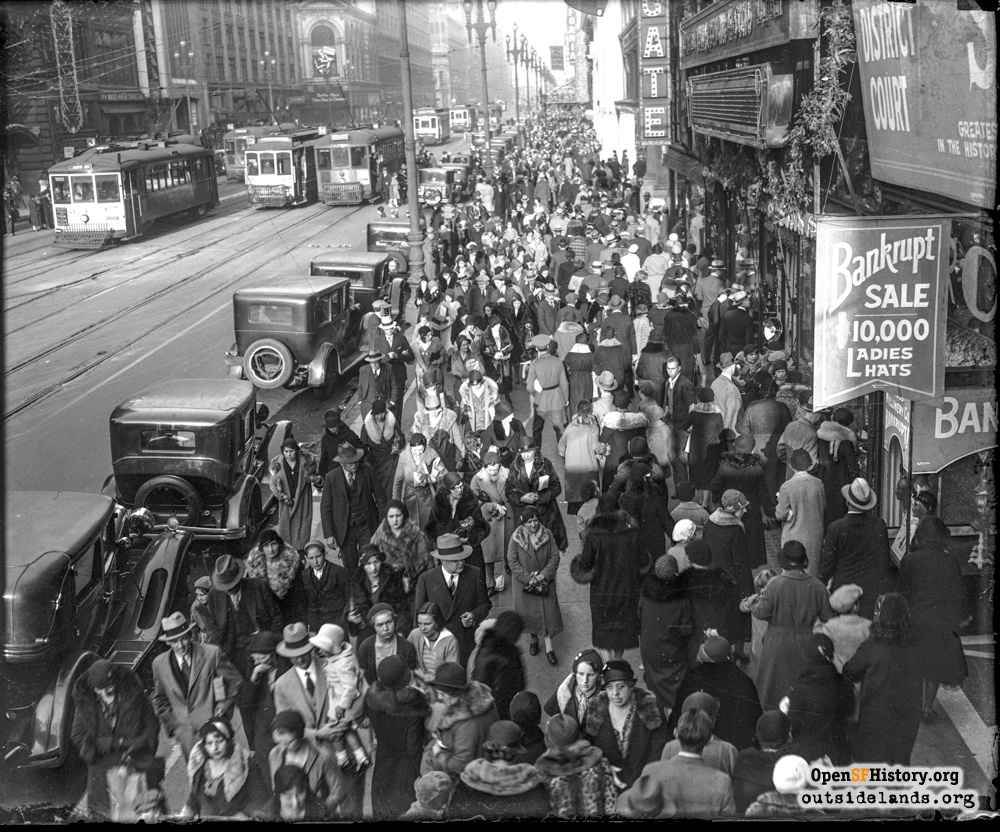 What was once new is now old and often gone.

I cut the Facebook umbilical cord recently, and have entered a new phase of life. Family and friends have again begun to communicate with me in old-fashioned, time-honored methods like email, telephone, and even the U.S. Postal Service.

My reasons for stepping back were purely practical—someone with a name sounding similar to mine was apparently once a well-known drug runner, thief, thug, and/or murderer (choose one) at a large housing project in the Midwest, and that person’s friends/admirers were beginning to contact me to rekindle old times—clearly a case of mistaken identity that I wanted to nip in the bud. Just for the record: I’ve never lived in Chicago.

This episode made me realize how much things have changed since I became an adult back in 1969, when such contact from strangers would have been impossible. It made me think about how many other aspects of our daily lives—the little threads that tie us to a particular time—are changing and unraveling, one-by-one. Thinking back…

My parents bought their first TV set shortly after I was born, and from that day on, the old console radio on the other wall of the living room, which had been in daily use until then, fell silent until Mom had it taken away in 1964. How I wish I still had that big old mahogany cabinet, though I’d be expecting it to broadcast 1940s music.

My grandmother who lived on 21st Avenue near Rivera Street was one of the last people in the Sunset who waited at home for an ice delivery every few days. She finally relented to pressure from Mom and Dad and bought a refrigerator to replace her built-in icebox (“but electricity makes thing hot—how can it keep things cold?”) when the ice company informed customers circa 1955 that regular home deliveries were no longer guaranteed.

When I was in high school, my parents allowed me to get an extension phone installed in my room—the old downstairs “rumpus room”—provided I pay the $19.95 installation cost and the extra monthly fee of $1. There was no wireless or plugging/unplugging then—a technician had to come out and hard-wire the thing directly into the wall. That was my first personal step into “modern” times and it was great!

In college, I worked part-time in a department store selling major appliances. People were still wary of microwaves, and in 1973, Consumer Reports rated them “not acceptable” because of concerns over radiation. Nevertheless, when the manufacturer’s product demonstrator cooked up a couple of pounds of fresh bacon, people followed their noses and came from every floor in the store to scarf it down, though we sold only a handful of microwaves each month. They were present in a mere 2% of U.S. homes then, increasing to 25% by the mid-1980s, and to well over 90% by the dawn of this millennium. Today, it’s statistically more likely that a U.S. household has its own microwave than its own bathroom.

When I rented my first apartment at Parkmerced in 1976, cable TV was generally unavailable in western San Francisco. It was a fairly straight shot to the “new” Sutro Tower, though, so I had decent reception—Channels 2, 4, 5, 7, and 9, along with a couple of newer UHF channels like 20 and 44—that was it. Today, cable has hundreds of channels, yet I still have the same complaint—“there’s nothing on TV.” 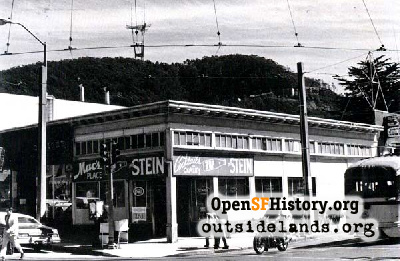 Postcard image of The Stein bar on the southeast corner of 9th Avenue and Irving Street, early 1970s. -

Even dear old Parkmerced itself is not going to be the same for much longer—in 2011, the city approved a twenty-year plan calling for the gradual demolition of the low-rise garden apartments, to be replaced with several new multi-story buildings while retaining the current eleven towers.

By the mid-1970s, I had abandoned instant coffee, and switched to an electric percolator. Since then, I’ve been through the Melitta cone and paper filter, with a kettle to boil water, French Press pot, liquid coffee concentrate, and have finally settled on an automatic drip machine that turns itself on at six a.m. and off two hours later—as long as I remember to set it up the night before. By contrast, Grandma lived her whole life with a stove-top percolator.

By 1978, I thought I was “cutting edge” when I bought an answering machine—a large, heavy, mechanical box, covered with imitation wood-grain that took up half the nightstand—but able to record messages and play them back when I got home, unless one of the tapes jammed, which was a regular occurrence. How far communications have come!

In 1979, while working at Bank of America’s credit card center at 1 South Van Ness Avenue, we employees became the test-market for ATMs. Tucked away in a corner of the building, it was quick, convenient, sure beat waiting in line at the branch to grab $20 on payday—and the first time that I had to memorize a PIN (Personal Identification Number). It wasn’t until 1983 that Parkside Branch at 20th Avenue and Taraval Street acquired one of the first ATMs in the Sunset, but today the machines are everywhere. With Direct Deposit now universal (BofA employees have had electronic payroll deposits since the 1960s), I cannot remember the last time that I stood in line inside a bank.

Until 1980, I always paid cash for gasoline, a habit begun as a teenager, whose parents wouldn’t have had it any other way. There was just something strange about charging something to a credit card and then having to pay the bill weeks later when it was used up. All that changed in 1980 when I was driving to work and saw the attendant at the 19th Avenue and Lincoln Way Shell station changing the price sign—unbelievably, gas had become ONE FULL DOLLAR per gallon, and from then on, it was easier to put it on a credit card, rather than having enough cash on hand for the ever-rising price. Recently, I encountered a soda machine that accepted credit cards—very convenient, since the Diet Cokes were two dollars per bottle—but such a thing was unimaginable just a few years ago. 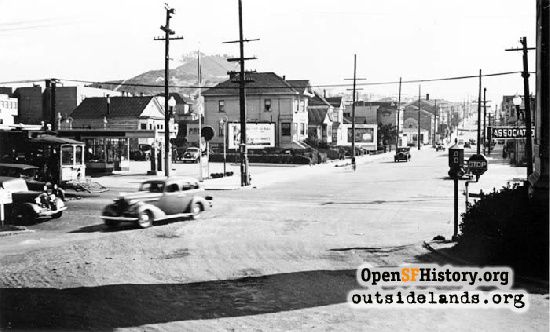 View south on 19th Avenue from Golden Gate Park across Lincoln Way about 1937. Shell and Associated gas stations shown., circa 1937 -

By 1982, my living room had a VCR, and I occasionally rented movies, but seldom recorded programs—now VCRs are relics of the past. Until recently, I had the same 1978 Sony Trinitron TV—still working perfectly, though with a cable connection offering remote control. Reluctantly, I let it go, and now have a new TV that shows the tiniest blemish in people’s complexions—for this I upgraded?

In 1983, Pacific Telephone—the only one in town—assigned downtown Bank of America offices a new prefix, 624, since all possible numbers had been exhausted on the existing 622/953 prefixes. No one mentioned that there was a new “call waiting” feature included. Employees taking customer calls would be interrupted by another incoming call, rather than that second call searching for another open line. It did not take the bank long to tell Pac Bell to remove that feature ASAP.

By 1984, I had an Apple IIe on my desk, replacing my trusty Smith-Corona portable electric typewriter—something my parents still regarded as being very modern. I could crank out letters and add up columns of numbers as the noisy printer banged out a series of interconnected dots on continuous-form paper. Today, here were are, chatting, connecting, researching anything under the sun, printing color photos, and watching more programming than anyone could ever have imagined—I definitely prefer today’s computers!

In the 1990s, I acquired my first cell phone, and it was handy knowing that I could call ahead to let someone know if I was running late, or notify the auto club if there was car trouble in the middle of nowhere. So far, I have resisted acquiring a “smart phone.” Just because I can have a virtual computer in my pocket does not necessarily mean that I want/need one. Sometimes, getting away from it all has advantages. (“Oh, I’m sorry I didn’t get your call asking me to help you move into that third floor apartment in the building without an elevator”.)

Cameras are like sunglasses and umbrellas with me—I’m likely to misplace/damage new ones pretty quickly. With a long line of Brownies, Instamatics, and Polaroids (not to mention Ray-Bans and Totes) trailing behind me, today’s choice is a single-use model from Walgreens—probably cheaper in the long run, considering how seldom I take pictures. 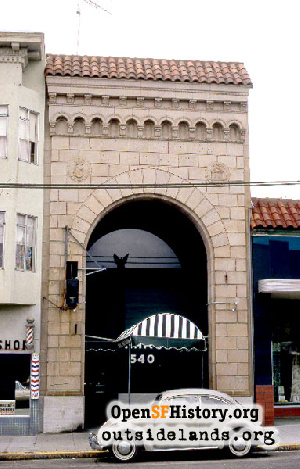 My first car, a 1971 Volkswagen, did not have air conditioning, automatic transmission, power steering, or power brakes, and my reaction was, “Who needs them?” Today you would be hard-pressed to find any car manufactured since 2000 that does not have these amenities as standard equipment. And while I once saved my pennies for parking meters, now I have a prepaid card in my wallet for the ever-increasing payment.

It’s also clear that younger drivers have never experienced parallel parking. For more than sixty years, California’s Department of Motor Vehicles required all applicants for a driver’s license to demonstrate that they could parallel park. Then in 1994, the requirement was quietly dropped—thus explaining some truly awful examples of parking that can be seen among the tight spaces in the Avenues.

Until about 2000, most people interested in finding an apartment, used car, job, or house turned to the San Francisco Chronicle. Then in 1995, along came Craigslist, founded in a small 9th Avenue storefront in the Inner Sunset, and newspaper classified advertising changed forever. Note to younger readers: as late as 1959, there were four San Francisco daily newspapers, all vying for circulation. The San Francisco Chronicle and the San Francisco Examiner covered mornings, with the Chron to the right of political center and the Examiner slightly left. The afternoon readership was divided between San Francisco News and the Call-Bulletin (itself the product of a 1929 merger of two newspapers). From 1959-1965, a merged News-Call-Bulletin covered afternoons, and then it was gone, with the Examiner shifting time slots, until becoming a free tabloid in 2003. Even the venerable Newsweek magazine, published 52 times a year since 1933, produced its final print edition in December 2012—going the way of Life, Look, Saturday Evening Post, National Lampoon, Gourmet, SmartMoney, and others, part of the ongoing demise of print journalism.

Now on the cusp of retirement, I still look forward to more innovations in my lifetime, though I will likely remain picky about which ones I choose to adopt:

I just hope there will still be a paper Chronicle on sale outside the Tennessee Grill on Taraval when I stop in there for breakfast some foggy morning in 2023.