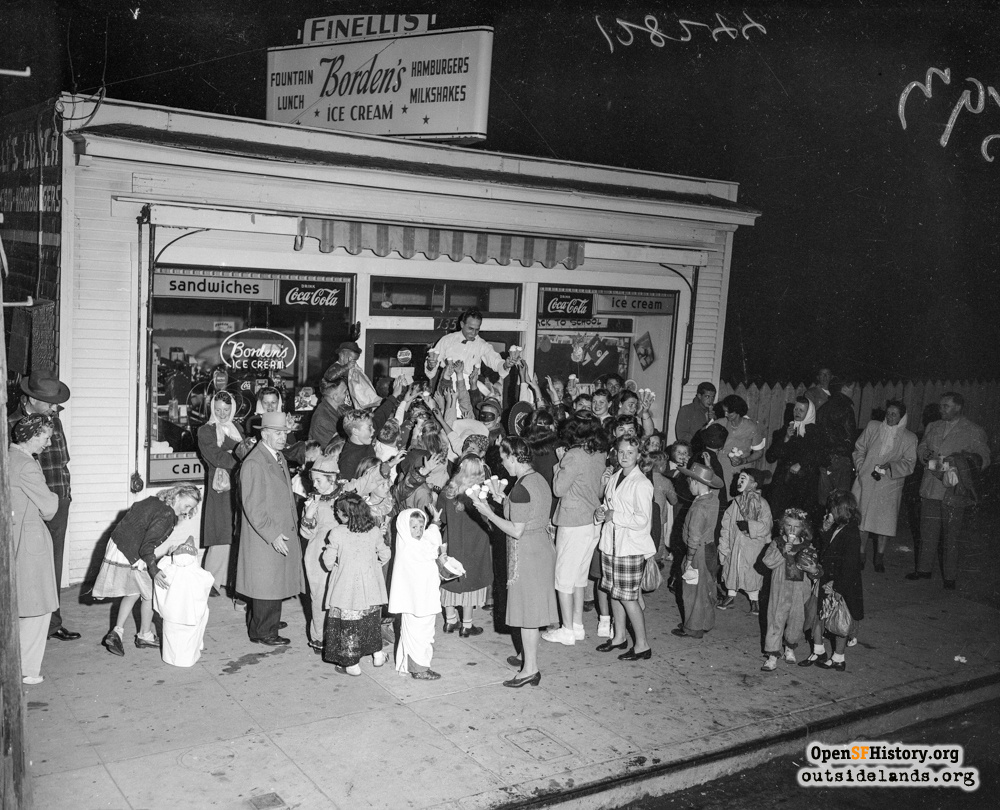 Small, family-run businesses give our neighborhoods their unique flavor. Frank takes a subjective look at a few of the places that helped shape our west side communities, some that are still going strong.

Streetwise: Remembering Business In The Neighborhoods

Since San Francisco is in the middle of Small Business Week (May 1, 2021 through May 7, 2021), it seemed like a good time to remember some still with us, some long gone, and other types of work that could once be found in the Outside Lands.

Across the Western Neighborhoods, many local commercial enterprises have been run by individuals, often alongside family members. In an era when smaller operations sometimes seem to face persistent challenges from big-box stores, national chains and online retailers, it's good to take a look back at the important part that these independent places - some of which are still out there and thriving - still play in our lives.

BAKERIES - Most households used to have a favorite neighborhood bakery. Adeline, Baronial, Golden Brown, and Robert's were once popular in the Sunset, while Cinderella, Fantasia, Schubert's, Sugar Bowl, and Wirth Brothers were busy places in the Richmond District. By 1971 or so, commercial bakeries began to be included in many large supermarket chains, and the independents started closing as their owners retired. Today we have seen a resurgence of popular small shops in the Western Neighborhoods (both family-owned and worker-owned cooperatives), including the decades-old Cinderella Bakery and also Schubert's, along with newer establishments: Arizmendi, Arsicault, Jane the Bakery, Sheng Kee, Noe Valley Bakery-West Portal and many others.

BOOKSTORES - Small neighborhood bookstores continue to face serious challenges from large corporations and online retailers. Some of the splendid survivors in this category include Green Apple Books (one location in the Richmond District and another in the Inner Sunset), along with Bookshop West Portal. One unique local spot for decades was San Francisciana, owned and operated by the late Marilyn Blaisdell on the ground floor of the Cliff House. Opened in the early 1960s, the shop sold numerous collectibles after George Whitney turned over his Cliff House gift shop inventory to Ms. Blaisdell, and in later years, she sold copyrighted photos, posters, and copies of her own books prior to her retirement. Read more: https://opensfhistory.org/pages/blaisdell.php

CLOTHING STORES - In pre-Stonestown days, many residents in the Western Neighborhoods could find stores specializing in clothing and accessories right in their own neighborhood shopping districts. These stores were able to readily identify items that were popular with locals, and owners sometimes lived “above the shop” in the middle of a neighborhood retail corridor. 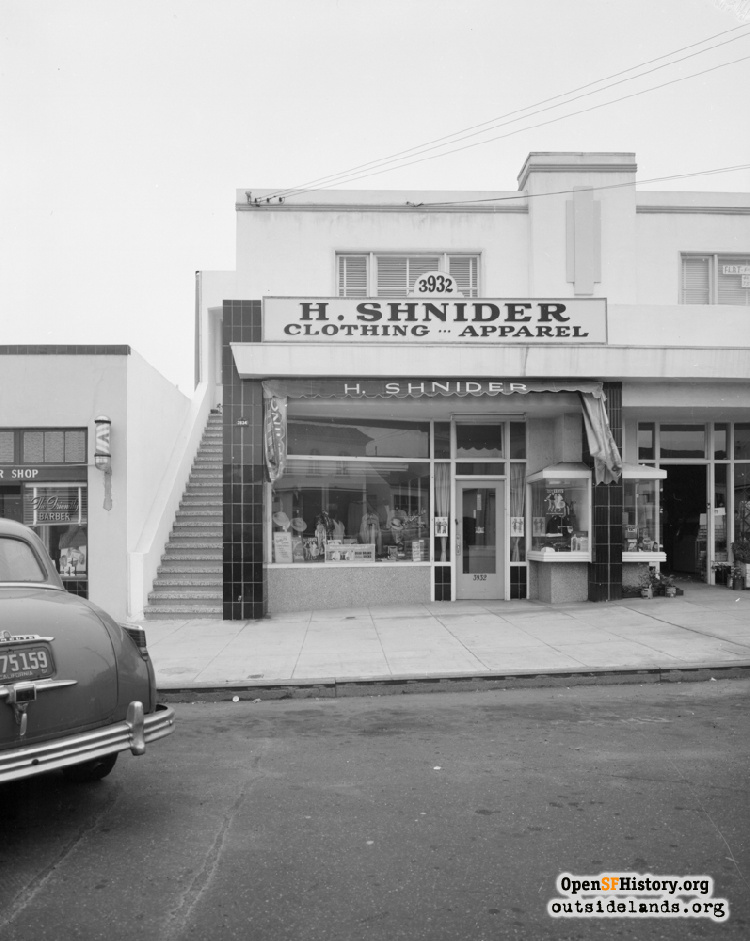 H.Shnider Clothing Store 3932 Irving, between 40th and 41st Avenues. Harry Shnider and his wife lived above the shop, and had another store on Geary Street., 1951 -

CORNER GROCERY STORES - Popular in the era when many residents did not drive or own refrigerator-freezers, corner stores enjoyed heavy daily patronage. By the turn of the millennium, though, the grocery landscape had begun to change - with groceries added to the list of items available at warehouse clubs. Many smaller grocery stores closed and the buildings were converted into or combined with chain drug store locations - thereby putting increased pressure on smaller neighborhood pharmacies and variety stores. Read more: https://outsidelands.org/streetwise_groceries.php

DANCE SCHOOLS - Once a neighborhood staple with steady enrollments, such businesses have faced challenges for many years, partly in response to fewer families with children living in San Francisco. The Shan-yee Poon School of Ballet in the Richmond District had been in operation for nearly 25 years when the owner decided to close in 2016. The Ann Healy School of Irish Dance, founded in San Francisco by Ann's grandfather in 1870 and operating on Taraval Street near 30th Avenue for many years, is still open, thanks to Ann's daughter and granddaughter, but has now been relocated to Marin County. 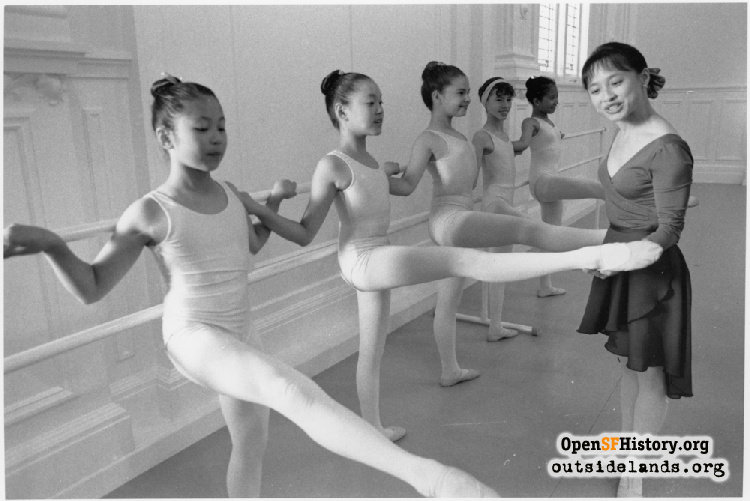 DELICATESSENS - Among hundreds of small shops, two local delicatessens - sadly, both long-closed - still pique the interest of local residents. Herb's on Taraval near 32 nd Avenue is well-remembered for its hot meatball sandwiches on Thursdays, while Herman's on Geary near 7th Avenue was popular for its in-store and commercially distributed potato salad.

Read more on a 2012 message board post about Herman's:

A 2002 message board post about Herb's was still drawing new comments as late as 2019:

FUNERAL DIRECTORS - Until recent times, residents of the Richmond and the Sunset Districts had a variety of local funeral directors to assist them in times of need. North of Golden Gate Park, one might patronize Ashley-McMullen/Wing Sun at 6th & Geary, Carew & English on Masonic Avenue near USF, McAvoy-O'Hara at 10th & Geary, or the Neptune Society Columbarium on Lorraine Court near Arguello. South of the Park, there was Currivan's on Irving Street and Hogan-Sullivan-Bianco on 9th Avenue. Due to closures and mergers, only McAvoy-O'Hara and the Columbarium are still active, though the former Arthur J. Sullivan & Company from Market Street (now merged with Duggan's-Serra in Daly City) is still represented by an office-only location at 26th Avenue & Geary Boulevard.

FUR SALONS - In another era, every neighborhood retail corridor had a small business operating as a fur salon, including: Bernard's in Stonestown, Coliseum Furs on Clement, Elkins on West Portal Avenue, Kane's on Ocean Avenue in Lakeside Village, H. Sommer on Irving Street and Taraval, and Sunset Furrier on Judah. Times and tastes all change, and these businesses have virtually disappeared from the local landscape.

GAS STATIONS - Neighborhood gas stations, whether independently owned or operating as a franchise of a major oil company, once dotted every part of San Francisco. Changing land uses, an emphasis on using public transportation or biking in the City, and the move to hybrid engines have combined to reduce the need for and presence of such local businesses.

ICE CREAM SHOPS - San Francisco's perpetually cool climate in the Western Neighborhoods does not lend itself to a heavy presence of ice cream parlors, though this type of business tends to be more prevalent in sunnier neighborhoods. While chain operators like Baskin-Robbins closed long-time locations on Irving Street and on West Portal Avenue, two small shops remain thriving. Joe's Ice Cream on Geary in the Richmond District and Polly Ann Ice Cream on Noriega in the Sunset were both opened in the 1950s by local neighborhood residents. More than 60 years later, both are still thriving with new owners at their helms.

MOTELS - Small family-operated motels once dotted many parts of the Western Neighborhoods. Sadly, many have disappeared over the years, often demolished for permanent housing such as the old Roberts-at-the-Beach on Sloat Boulevard and the Sunset Motel at 18th Avenue & Taraval. Fortunately, San Francisco's historic first motel, the Ocean Park (opened in 1937 to coincide with the dedication of the Golden Gate Bridge) is still in operation at 46th Avenue and Wawona. Owners Marc and Vicki Duffett who have been running things nicely since 1977 are shown here with their children in 1995.

NEWSPAPER CARRIERS - Prior to 1959, San Francisco boasted 4 major daily newspapers, each with a significant daily readership. The Chronicle and the The Examiner vied for morning circulation, while the News and the Call-Bulletin were published as afternoon papers. In addition, there were others, such as the Shopping News and the Progress, that were heavily laden with advertisements. Many young people from the post-World War II era often remember this as their first real employment experience. The young man shown here is standing in the Inner Sunset near 9th Avenue and Judah in the late 1940s. 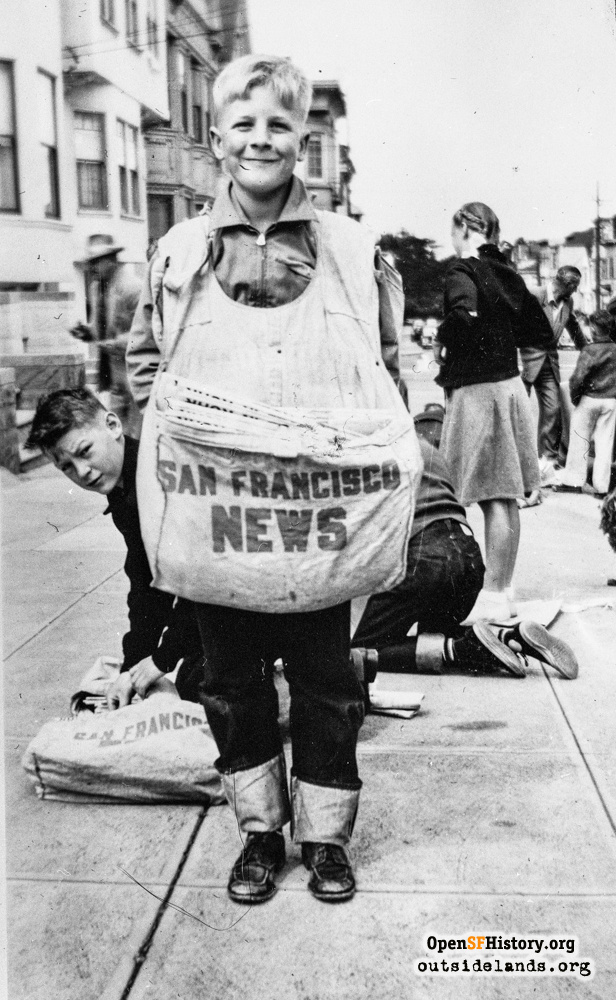 RESTAURANTS - Small neighborhood places in the Sunset and Richmond Districts that are no longer in operation are still fondly remembered, and some of them have been covered in WNP articles/podcasts:

SCHOOL CROSSING GUARDS - For decades, pedestrian safety near schools was monitored by dedicated groups of crossing guards - mostly 6th, 7th, and 8th grade girls and boys - who had an opportunity to display their leadership skills by providing an essential service in a sheltered, para-military environment as part of Traffic Squads. Although unpaid, the volunteers received regular recognition in the form of weekend movie passes at local theaters. The program was disbanded for many years, but there has been a recent resurgence, this time with paid adults. Read more: