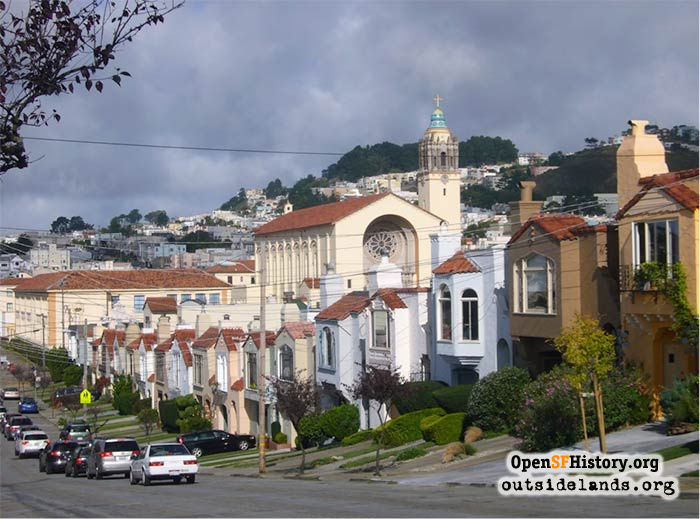 When I first heard about this particular class reunion, it was still nearly two years away, so the significance didn’t hit me immediately. As time went on, though, I soon began to realize that 2016 would mark a full HALF-CENTURY since my graduation from St. Cecilia School.

Beginning in September of 1958 (after many of us had been through Kindergarten at Parkside, West Portal, Crespi, or Miraloma schools because Kindergarten at St. Cecilia had been forced to close in 1957 due to overcrowding in the school building), 100 squirming youngsters were enrolled in 1st Grade. Fifty of us were assigned to Room #4 with Sister Miriam George, with the other fifty just across the hall in Room #8 with Sr. Laurencie Marie. There was eventually some intermingling of these two classroom groups after 3rd Grade (as well as on the schoolyard during daily lunch and recess periods from the very outset), so we soon knew everyone at our grade level. 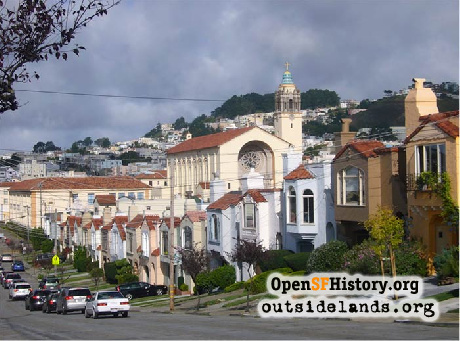 We were to be together five days a week until June 1966, and in retrospect, this was the longest period that most of us would ever spend with the same non-family members on a daily basis. There were relatively few additions or deletions to this group over the years, since most of our parents remained in the same nearby homes for a very long time. We grew up together, sharing a wide variety of events, including watching the inauguration of President John F. Kennedy when we were in 3rd Grade and then experiencing his assassination just 1,000 days later when we were in 6th Grade—a huge demarcation line that separated “then” and “now” for most of us.

When we sat in the massive St. Cecilia Church for graduation on that Saturday afternoon in June 1966, Monsignor Collins told us to “take a good look around—you will never again be together like this as a single group,” and he was so right. Three months later, we were dispersed—mostly to one San Francisco’s many gender-specific Catholic schools of the time. About half the 50 boys selected St. Ignatius, with most of the others equally divided between Sacred Heart and Riordan. The girls had more choices, though, and while roughly half of them opted for Mercy on 19th Avenue, the remainder selected primarily Star of the Sea, Presentation, St. Rose, Convent of the Sacred Heart, or Cathedral.

Many of us still saw one another during our high school years, as our daily schedules generally involved criss-crossing San Francisco on MUNI buses and streetcars every day. Friendships were maintained or renewed as we bumped into one another on the old 10-Monterey line from the Richmond District to Forest Hill Station, changing streetcars at the West Portal entrance of the Twin Peaks Tunnel, or at busy transfer points like 25th Avenue and Balboa Street. The outdoor mall at Stonestown and the sidewalks along West Portal Avenue or the businesses on Taraval Street were also places where we might bump into former classmates. 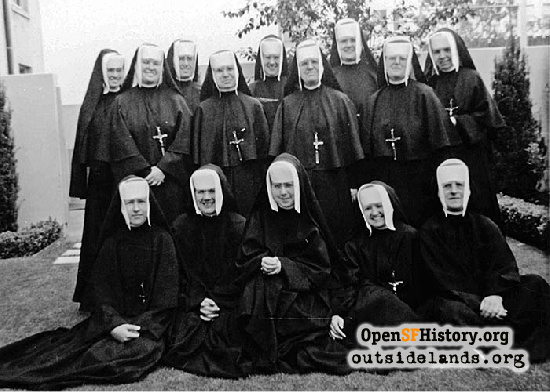 By the time we were ready for college, though, the diaspora of native San Franciscans was just beginning. Some of us remained local at City College, San Francisco State, or University of San Francisco, but many others roamed far from our Parkside District starting point to institutions of higher learning up and down the state of California, as well as attending schools in other states. Many of us lost track of one another, save for the occasional 1970s-era wedding invitations that were exchanged among those who were close friends.

As we moved into our working years in the 1970s and 1980s, it was always interesting to hear about the careers that classmates were selecting for themselves. Several became teachers, aides, or school administrators, and these folks were generally known for their own good grades, punctuality, and organizational skills. Many joined the San Francisco Police or Fire Departments, and one classmate in particular has four sisters, close to us in age, who all rose through the ranks of SFPD. There were a few in various health-care careers, plus several attorneys, as well as others who settled into careers with financial services institutions, retailers, careers with various city, state, and federal government agencies. Three boys entered the seminary after 8th Grade, but only one remained until ordination, while none of the girls opted for convent life—there was definitely a shift in vocations underway by the time all of us were making career choices.

By the middle of our working years—roughly the 1980s and 1990s, the primary interaction for many of us was seeing one another along Market Street downtown or in the Financial District, as many of our classmates were living in the suburbs and could no longer be found shopping along West Portal Avenue or at Stonestown on a Saturday afternoon. Church attendance was also in a state of flux in those years, so even those who remained local often did not see their former classmates at Sunday Mass.

By the 1990s, most of us were in mid-career, with children of various ages. St. Cecilia School did not have an active alumni group in those days (though today, there is a very active organization). Sadly, many encounters during this time period involved attending funerals and memorial services for one another’s parents. We were changing, all right—slowly but surely being pushed to the front of the line by the loss of older relatives and the impending adulthood of all of those once-small children that many of us were having in the 1970s and 1980s. 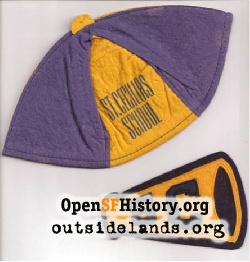 As the new millennium dawned, our lives were still changing. There were occasional mentions—often via the “Mom network”—of a classmate’s parents or siblings. Sadly, such news sometimes involved serious illness—sometimes even a classmate’s own—and this was occasionally followed up by the stunning realization, often gleaned from reading the Chronicle obituaries over morning coffee, that a few such ailments eventually resulted in some very sad outcomes. Serious adult health issues were beginning to impact that group of bright-eyed youngsters staring out from all those faded class pictures taken in the late 1950s.

A dozen years into this millennium, we were all turning 60, as most of our Moms and virtually all of our Dads were either gone or in somewhat fragile health. Grandchildren were popping up for many, and several of us were beginning to retire from the workforce.

Early in 2015, one classmate was good enough to put together a reunion committee that began to plan our big event. Tracking people down was easier than in the past when our class held a 1976 reunion, nicknamed “once in 10 and never again.” The Internet was a big help, as was the school’s extensive database of graduates managed by a recently hired Alumni Director.

The initial effort was successful, and we were fortunate enough to track down contact information (email, land/cell telephone number, and/or snail mail address) for virtually every single classmate. Sadly, we managed to confirm that 15 of them were already deceased, reducing our group to only 87.

The committee quickly decided on a local gathering that would include a tour of the school, as well as an off-site venue for cocktails and dinner. We tracked down information on the four nuns who were still living, and received warm wishes from them, but none were able to travel to San Francisco for the event. Sadly, there were no lay teachers from our era still living.

Our reunion commenced in a familiar spot, St. Cecilia parish. Early-bird arrivals gathered on a Friday night for a brief meet-and-greet at the Collins Center—a year-2000 meeting facility that was new to many of us. We then reassembled in St. Cecilia Church on Saturday afternoon for a Mass led by current pastor, Monsignor Harriman. No more lining up by height, we were allowed to enter and select our own seats.

After Mass and a tour of the school building, we moved on to cocktails and dinner at the Harding Park Golf Club. All those people we had been staring at during Mass an hour or two earlier (could that possibly be…? OMG—it IS!), were now wearing name badges for easy identification. During the course of the evening, we also received “Golden Diplomas” to mark the occasion.

Many people were absolutely themselves from 50 years earlier. Most of us were a bit changed in appearance, but once people began talking, we knew who they were—our conversations were not much different, even if we had last spoken with each other at age 14. Hair might change and body shapes shift a bit, but most people were still amazingly true to their youthful personalities. The nice people were still very nice—and even the few who might have kept to themselves 50 years ago also turned out to be great people and terrific conversationalists.

As cocktails and dinner progressed, there was a continuous loop program featuring 1960s-era music and video images of our Parkside and West Portal neighborhoods. We saw photos and heard heartfelt words about those 15 classmates and the many teachers who have left us. Old friendships were rekindled, while some new ones were being nurtured by the pleasant atmosphere—the St. Cecilia Class of 1960 even reported that a wedding came about a few years after one couple, both widowed, reconnected at the 50-year reunion of that class. 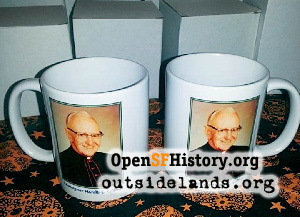 There were photo enlargements posted, including a blow-up image of beloved Pastor Monsignor Harold Collins, a group shot of all the nuns from the 1960-61 school year, plus our own 1966 graduation class photo. A recently published commemorative history book about the parish was distributed to graduates, along with a photo-mug featuring Monsignor Collins. A handful of speakers kept their remarks brief, so that everyone had a chance to reminisce with each other on a variety of subjects.

Food and beverage choices were all excellent, but the best idea from the reunion committee involved ordering several cases of IT’S IT for dessert. Memories of Playland-at-the-Beach, with its midway rides, roller coaster, calliope music, and restaurants like The Hot House fueled several more hours of pleasant conversation. Post-dinner snacks included a table full of penny candy, reminiscent of the long-gone counter that we used to visit at Vicente Variety [see Streetwise, July 2013 for a description of these offerings].

The entire event was a pleasant walk down memory lane, and it reinforced the belief that “the apple does not fall far from the tree.” We all grew up with loving and devoted parents who had a strong commitment to our educations, as well as volunteering significant amounts of time, talent, and treasure to our neighborhood and school community—something that we can see being repeated today by our own generation. There was an impromptu collection, and our class made a sizable donation to the school’s tuition-assistance fund, as well as to the support of the retired Sisters who taught us. We also purchased a memorial brick inscribed CLASS OF 1966 to be placed on the wall of the parking lot on 17th Avenue where the old pre-1956 church once stood. This was the spot where most of us were baptized, where we once played together at recess, and where we could simply hang out after school. Now, we will be remembered there forever.

Monsignor Collins said it best many decades ago when he coined a classic motto for the parish and school that remains true today: “The Finest, the Greatest, and the Best.”

As we approach November 24th, that spirit of generosity and concern for others has once again become apparent to everyone—and that is something for which we can all be very grateful, now and into the future.

HAPPY THANKSGIVING TO ALL!