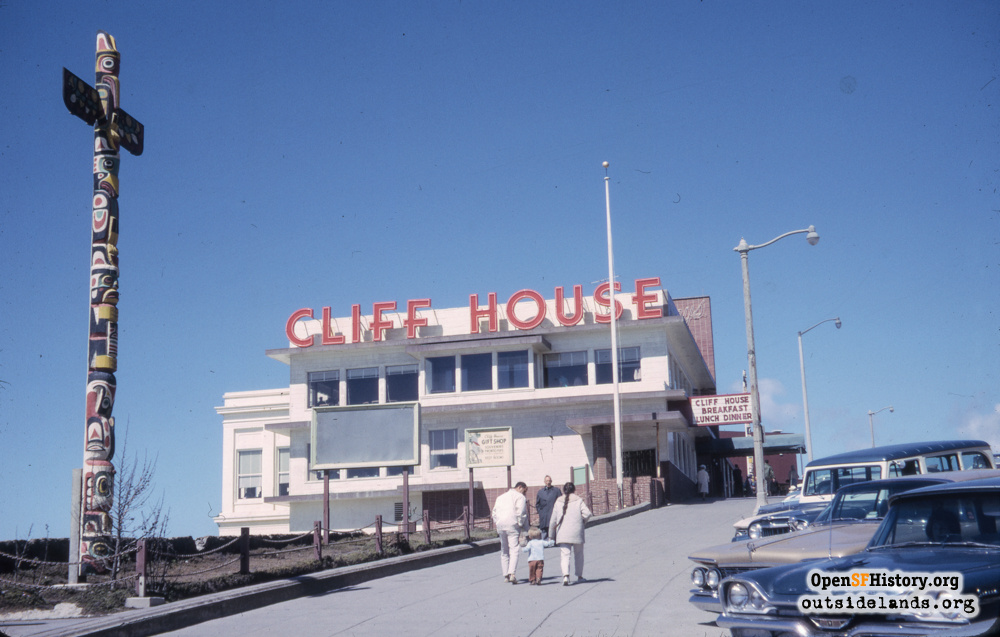 A timeline of the west side landmark roadhouse and restaurant

Last New Year's Eve-December 31, 2020-was a sad day in San Francisco, marking the permanent closure of the historic Cliff House. As the sign's individual letters were removed and lowered to the ground one-by-one, a crowd gathered to witness the momentous occasion. Sad as that scene was, though, prior generations of San Franciscans have witnessed similar events at the very same location many times before.

From its first incarnation in 1863 (not 1858 as some assert-that date refers to a restaurant of another name in a different location), the Cliff House has attracted San Franciscans seeking food, drink, and entertainment. In spite of many news reports, however, there has NOT been 158 years of continuous fine dining at the westernmost point of San Francisco's continental shore. 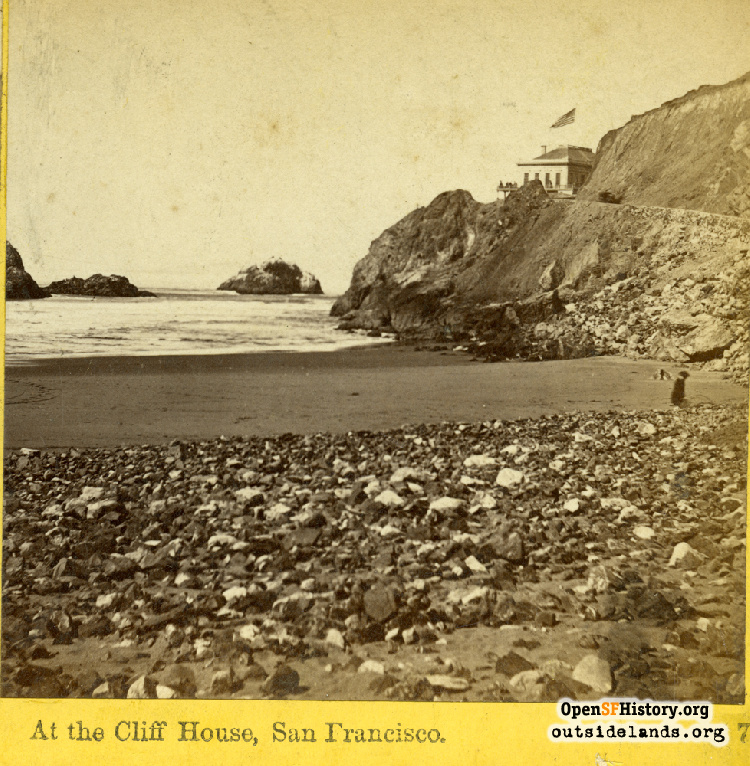 That first Cliff House from 1863 opened as a wooden structure built by C.C. Butler and Senator Buckley that occupied a rectangular footprint at the site of today's building. Owing to its popularity, it was remodeled and expanded by a new owner, Captain Foster, with additions on both the north and south ends of the building plus a wrap-around promenade within its first decade of operation.

This leads to the question: How many Cliff Houses have there been? The quick answer is THREE (thanks to historian John Martini)-though there have been numerous remodeling projects over the years that significantly altered the appearance of buildings at the site. Architecturally speaking, though, a remodeling project does NOT constitute a new building. See: https://www.outsidelands.org/cliffhouse-versions.php

In May of 1881, prominent San Franciscan Adolph Sutro purchased the 18-year-old expanded Cliff House from Captain Foster along with much of the surrounding land and soon developed his home and gardens on nearby Sutro Heights. Six years later, in January of 1887, the schooner Parallel, carrying 42 tons of gunpowder, went aground and later exploded on the rocks below the Cliff House. The northern portion of the Cliff House was blown away, and every window in the building was broken. Sutro repaired the extensive damage to this "first" Cliff House and resumed operations.

In November of 1894, Sutro was elected Mayor of San Francisco. Several weeks later, on Christmas Day, the first Cliff House burned to the ground-just one of several spectacular blazes to occur in that tiny corner of San Francisco over the years. Sutro immediately vowed to rebuild and he hired an architectural firm to design an elaborate "second" Cliff House. 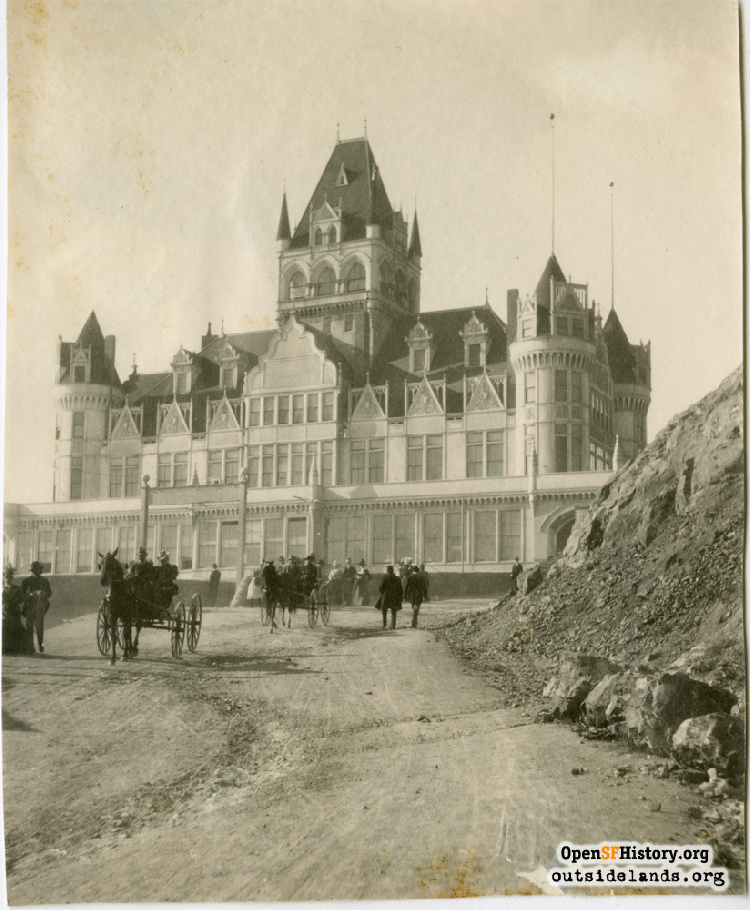 Sutro's grand Victorian-style Cliff House opened to much fanfare in January of 1896-though within a matter of days there was winter storm damage to the new building. That damage was soon repaired and a few weeks later, the Sutro Electric Railroad began operations, whisking San Franciscans from the central part of the City to the western edge. Sadly, just two years later, Adolph Sutro was declared mentally incompetent and died in the summer of 1898.

Management of the second Cliff House then became the responsibility of the Sutro Estate, managed by Adolph's daughter, Dr. Emma Sutro Merritt. The second Cliff House remained popular, though historians note that there was periodic storm damage to the large wooden structure. While it survived the April 18, 1906 earthquake relatively unscathed, there was an announcement one year later, in April of 1907 that a new operator, John Tait, had secured a ten-year lease from the Sutro Estate, and planned to have extensive renovations completed by late summer of 1907. Again, fate intervened and the ornate second Cliff House burned to the ground in a spectacular blaze on September 7, 1907. On behalf of the estate, Adolph's daughter, Emma Sutro Merritt, then began construction of a new (third) Cliff House in 1908-this time built of reinforced concrete after two fire-related losses that resulted in lengthy closures. 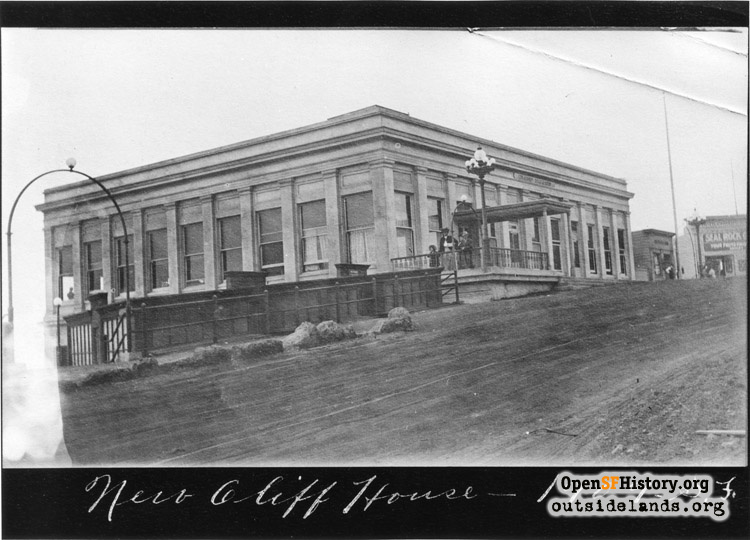 The new third Cliff House was dedicated on July 1, 1909, and was again visited by thousands of San Franciscans and numerous celebrities. In July of 1917, just 3 months after the U.S. entry into World War I, the U.S. Army considered taking over both the Cliff House and the Sutro Baths properties for use by military personnel in support of the war effort. Although the physical take-over did not occur, the Army did have the Cliff House's liquor license revoked because of the perceived danger of alcohol available so close to the nearby military posts of the Presidio, Fort Miley, and Fort Scott. Within one year, the "dry" status of the Cliff House (reinforced by the enactment of the 18th Amendment to the U.S. Constitution that instituted a nationwide Prohibition against the sale of alcohol) resulted in its closure, announced via newspaper reports dated August, 1918.

More than two years later, in December 1920, Richard "Shorty" Roberts, proprietor of another Ocean Beach resort, announced his plans to reopen the shuttered Cliff House and to operate it in compliance with the new law. Roberts leased the property from the Sutro Estate during the years 1920-1925. In 1922, the City widened Point Lobos Avenue, and Roberts expanded the building's interior during a six-month closure that ran from January through July that year. Roberts apparently had some level of difficulty maintaining the "no alcohol" policy, as there were multiple police raids on the Cliff House from 1923 to 1925. Roberts then shifted the focus from "fine dining" to a coffee shop menu, including donuts and hot dogs, immediately after the January 1, 1925 raid. This effort was short-lived and Roberts shut the place down for good in October 1925.

And then the Cliff House sat vacant for nearly twelve years.

In the meantime, ownership had passed to Adolph Sutro's son, Charles, who had acquired it from his father's estate, though the dining rooms were not in operation. When Charles died in 1936, his estate put the Cliff House building up for sale, and it was purchased for $200,000 by brothers Leo and George Whitney, who had been operating nearby Playland-at-the-Beach since the 1920s. The Whitney Brothers then invested another $100,000 on remodeling before reopening the site to coincide with the dedication of the Golden Gate Bridge in May 1937. 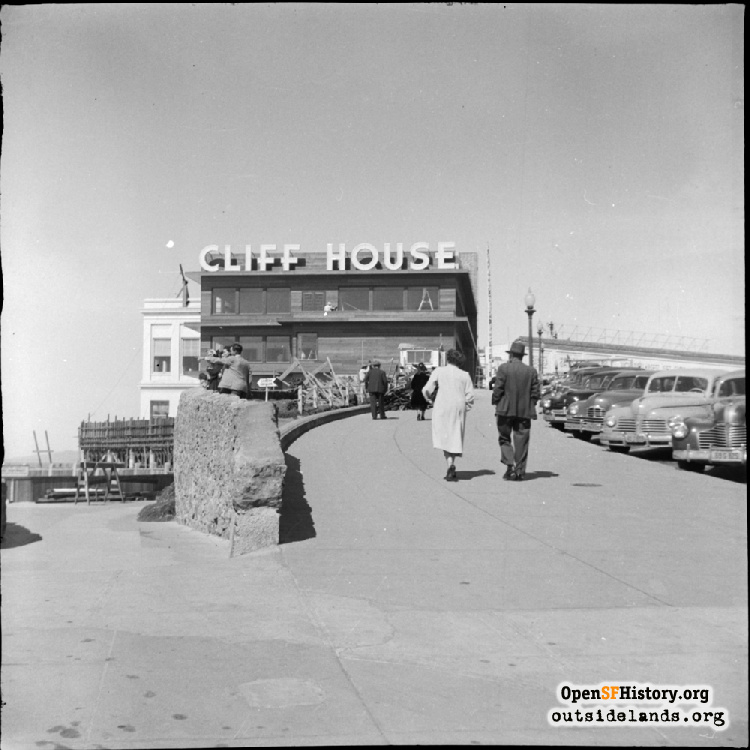 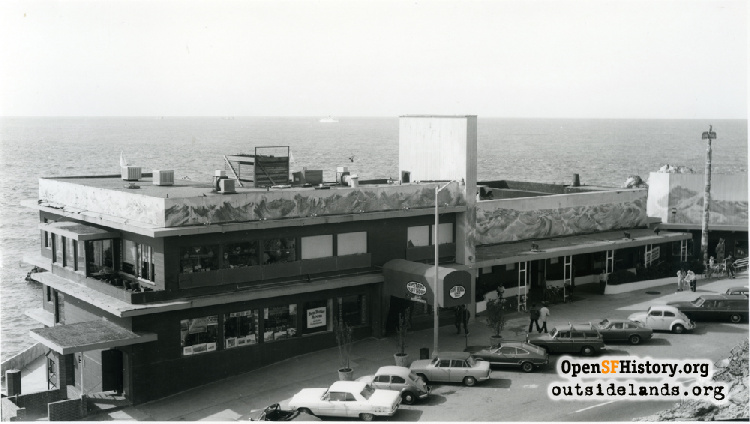 In the early 1970s, near the end of the Whitney Brothers' ownership, the dining rooms were again closed and the exterior of the building was remodeled with a theme of "blue ocean waves" while the bar at the north end of the building remained in operation. At this time, "fine dining" was suspended and the clientele shifted heavily to college students who turned out in large numbers on Tuesday evenings for "10-cent beer nights".

In 1977, the property was acquired by the National Park Service (NPS) as part of the Golden Gate National Recreation Area, with the Hountalas family continuing as operators under the name "Upstairs at the Cliff House"-a breakfast/lunch spot well known for its variety of omelets. Under the NPS, the blue ocean waves painted on the exterior walls disappeared by the late 1970s, replaced with a simple brown-and-white paint scheme. 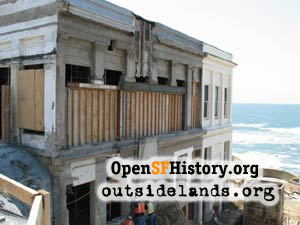 Working with the Hountalas Family, the NPS eventually planned a major restoration of the facility during a lengthy closure in 2003-2004, stripping off the 1949-50 redwood siding and restoring much of the building's 1909 architectural detail, plus the construction of a modern addition at the building's north end.

Although the Hountalas Family had nearly a half-century of experience operating the Cliff House, under the rules of the Federal government, contracts for concessions on Federal property must go out to bid periodically. The last of several long-term agreements between the NPS and the Hountalas Family expired in 2018 and was extended for multiple short-term periods. These ongoing lease negotiations complicated by Covid-19 closure to prohibited indoor dining for most of 2020 proved too much for the Hountalas family, which chose to let their lease expire at the end of the year.

In spite of repeated closures in the past-some of them quite lengthy-history suggests that the Cliff House will likely return in some form in the future. Until then, a hearty CHEERS! to all those who have created and enjoyed so many years of dining and merriment on San Francisco's western edge.

One of the most-photographed locations in the Western Neighborhoods, the Cliff House appears in more than 2,500 images that are posted on the WNP site.

An additional 1,900+ Cliff House images are available at OpenSFHistory

NOTE: While the building remains shuttered today, Western Neighborhoods Project was able to acquire at auction over 60 historic artifacts related to the Cliff House, Sutro Baths, and Playland-at-the-Beach that the Hountalas Family had collected over the years. These historic artifacts art being conserved, cataloged, and will soon be on public display again, thanks to dedicated WNP partners, volunteers, and generous contributors to their Save The Cliff House Collection campaign.