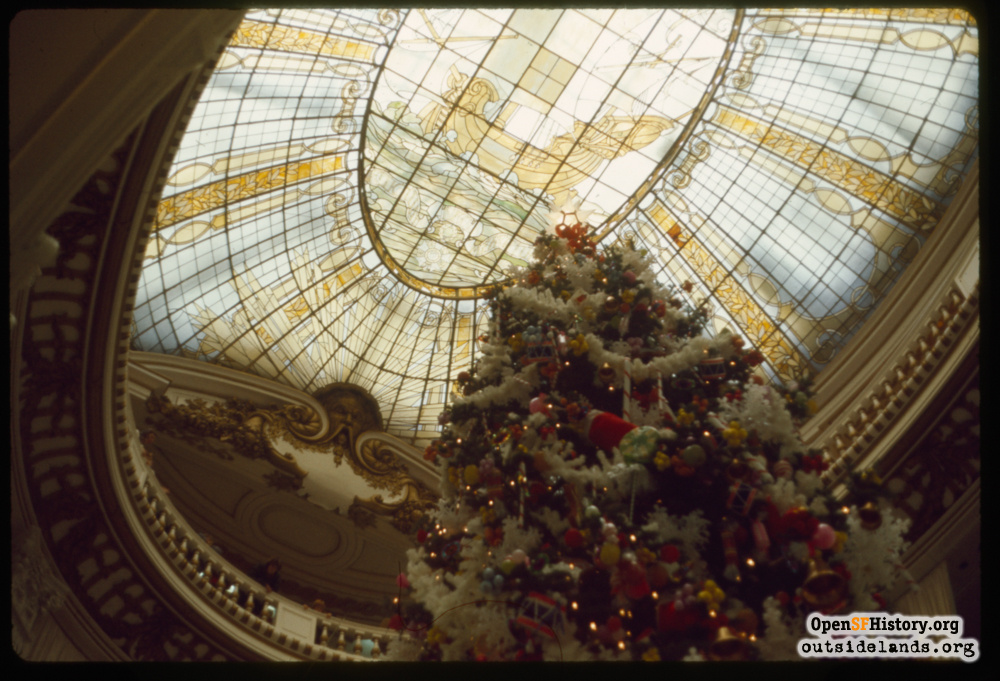 Streetwise: Jingle All the Way

Christmas rituals and routines from San Francisco past

Streetwise: Jingle All the Way

As this column approaches its tenth anniversary (120 monthly installments since January 2009), year-end celebrations remain a popular topic for remembrance.

In earlier times, holidays were celebrated one by one, with little or no overlap. Halloween items might go on sale in early October at local retailers such as Vicente Variety at 23rd Avenue and Vicente Street, King Norman’s on Clement Street, many local Woolworth stores, and dozens of other places. When that holiday was over, Thanksgiving goods appeared, and Christmas merchandise would follow a month later. It was a pleasant, orderly way to do business—unlike many stores today, where back-to-school, Halloween, and Thanksgiving items are often displayed side-by-side in late summer, with Christmas-themed goods sometimes creeping into the mix before Labor Day.

It used to be just after Thanksgiving that TV commercials began advertising Schwinn bicycles, Easy-Bake ovens, boxed games, dolls, and Lionel trains as Christmas/Hanukkah gifts “for good girls and boys”—a qualifier seldom seen today. Moms and Dads were expected to overhear such suggestions and most kids helped the process along with some not-too-subtle reminders and lengthy letters to Santa. My own mother (along with many others who had secretarial training) kept her holiday shopping list in short-hand—the secret code indecipherable by Dads and kids.

On December 1st, local newspapers began placing a prominent box on the front pages, announcing “Only XX more shopping days before Christmas,” while big stores politely refrained from placing a Santa Claus face in a corner of their daily ads until then. The jolly man’s arrival downtown via cable car was cause for celebration—unlike today’s public stampede and trampling of other greedy shoppers in big box stores just hours after Thanksgiving dinner as weary rent-a-cops look on helplessly.

Holiday shopping trips followed a pattern for many families. The Emporium on Market Street was often the first place visited. Five streetcar lines and numerous MUNI buses stopped right in front of the store and often more than half the passengers disembarked simultaneously. The store was decorated to look like a winter wonderland, including its massive toy department at the back of the fourth floor, with children’s clothing nearby. Families would often split up, with Grandma or another relative taking the kids to visit Santa and the carnival-like roof rides so that moms could shop on their own. 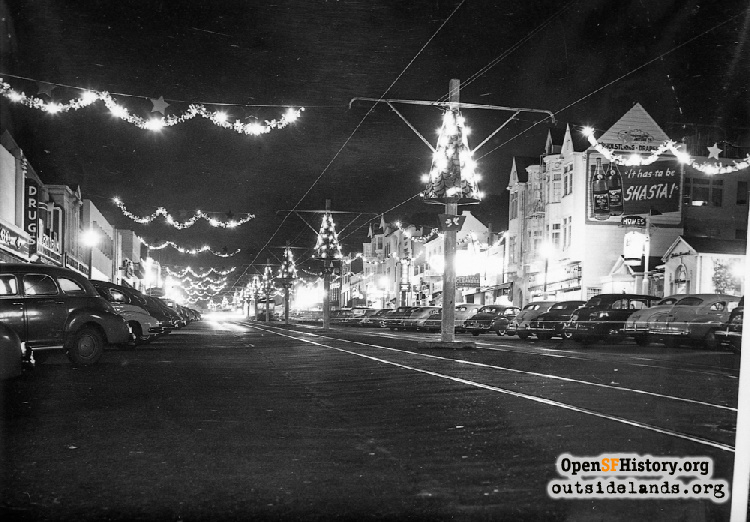 Lunch at Woolworth was a regular stop for many families, and that store offered numerous gift items priced under $1 (records, books, picture frames, desk accessories) for bargain-conscious shoppers—especially school-age children. Other families favored a sit-down lunch at Bernstein’s on Powell Street, John’s Grill on Ellis, or Townsend’s on Geary—particularly if grandparents happened to be present.

A visit to the City of Paris department store tree beneath the rotunda was a big part of the day, and most kids insisted on viewing the spectacular ornaments from each floor in order to see the details. Depending on how well everyone’s feet were feeling there might be a walk through the Podesta-Baldocchi flower shop on Grant Avenue with thousands of tiny twinkling lights, poinsettias, and the scent of evergreen boughs. Ladies might make a stop at the beautifully appointed restrooms of I. Magnin, and if youngsters were especially well-behaved there might even be a sweet treat at Blum’s before the streetcar ride home, with everyone feeling exhausted but happy.

Many people also made excursions to Stonestown (more roof rides at the Emporium store there), plus shopping at B. Dalton Books, Gallenkamp Shoes, or Toy World. At the far end of the mall was the Butler Brothers store—which became City of Paris in 1960, then Bullock’s in 1977, then Nordstrom in 1988—now reportedly set to close in January 2019. Other visits might include GETs on Sloat Boulevard (kids’ clothing, Kodak camera equipment, and discounted toys), Sears Roebuck at Geary Boulevard and Masonic Avenue (tools for Dad/a major appliance for Mom), or one of the many shops along neighborhood shopping corridors. Although we generally carried our purchases home, many customers today rely upon a friendly UPS or FedEx driver to deliver items from online merchants.

Among childhood traditions, many of us continued to express belief in Santa even after we knew the truth—out of fear that our gifts might become underwear, bathrobes, or slippers if our parents learned what we really knew. As we grew older, wish-list items shifted from toys and games to very specific clothing and accessories. Parents often found it difficult to judge fashion trends, and many of them relied upon anything from Joseph Magnin to please teen-age girls, and items from Bruce Bary in Stonestown to please boys (I still wear the red-and-blue scarf in S.I. colors that came from that store at Christmas of 1966). Eventually, money became a popular gift that satisfied changing teen tastes.

Major stores offered gift certificates, but nowhere near today’s proliferation of gift cards. In the old days, my parents might stock up with a couple of one-pound boxes of See’s Candy or gift-wrapped quarts of bourbon as “last-minute gifts”—while today, a quick visit to any supermarket provides easy access to gift cards from hundreds of different stores and restaurants. 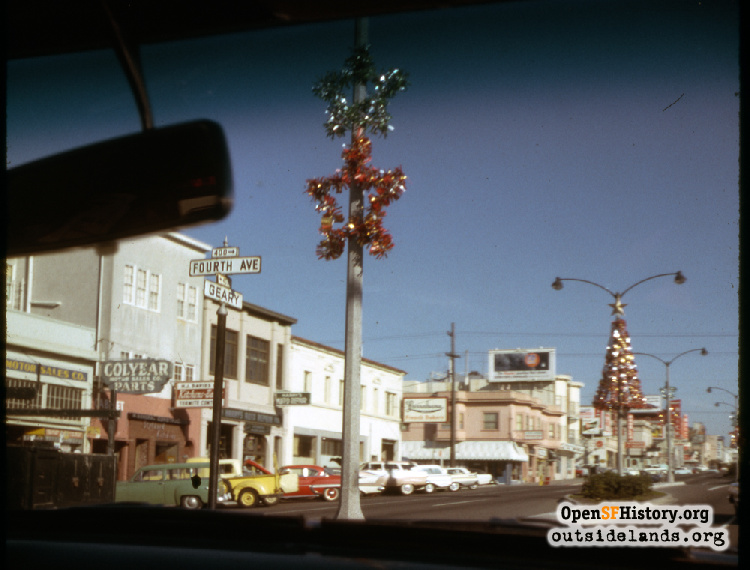 Mom always picked our family’s Christmas card in November—invariably one with a decorated tree in shades of green and gold. (Since college, I’ve favored images of the three kings for my own cards.) On a Sunday afternoon in December, there would be an assembly line at the kitchen table: Mom addressing envelopes (Palmer Method penmanship from Catholic school days) while Dad would write messages to a dozen or so of his World War II Navy buddies scattered across the country, and then I would apply stamps, return address labels, and Christmas seals. December mail was delivered twice a day until the mid-1960s, and all the cards we received were displayed throughout the living room and dining room.

On the 2600 block of 18th Avenue adults and kids alike were eagerly awaiting the second Saturday of December—the kick-off of an annual outdoor holiday lighting tradition begun in the 1930s when the homes were new, and continuing until 1969-70. This was the night that my grandmother always took us out for an early dinner at The Hot House so that party preparations in Mom’s kitchen were not disturbed. Mexican food, salt spray on a cold night, twinkling lights, and the joyful sounds of Playland remain an indelible Christmas memory for me.

Once we were home after dinner, Santa would arrive at 6:00 p.m., courtesy of the San Francisco Fire Department, via an engine from the station on 18th Avenue near Rivera Street. As sirens blared, all the Christmas trees and outdoor lights on the block were illuminated at the same time. Even among those who did not celebrate the religious aspects of Christmas joined in with lighted outdoor Stars of David plus festive pinecone wreaths and jolly snow figures in their windows.

As loudspeakers played carols, Santa sat on a gold-painted “throne” at someone’s garage entrance, listening to wish lists and distributing peppermint candy canes. The festivities continued with open house parties up and down both sides of the street—parents, kids, classmates, relatives, and friends all joining together in a wonderful celebration that spilled in and out of every home until nearly midnight. We truly knew our neighbors then, and many of those friendships continue to this day. 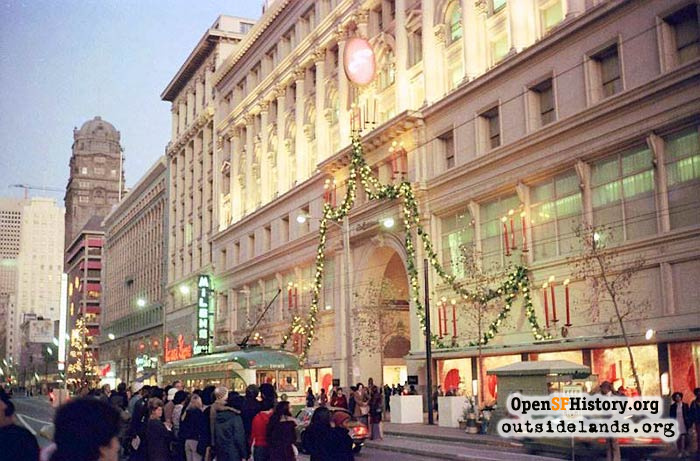 As the holidays grew closer, baking was a popular activity and neighborhood grocery stores sometimes experienced shortages of essential items. Many moms, my own included, would begin accumulating cereals and seasonings for her Chex Mix—as others stocked up on red-green sprinkles, chocolate chips, walnuts, or the makings for Rice Krispie treats. Many households saved empty jars and boxes all year long for holiday packaging, eventually filling them with food treats wrapped in shiny foil and topped with a red or green bow as presents for neighbors.

Last-minute gifts (Dad’s traditional bottle of Aqua Velva aftershave and a carton of Kool menthol cigarettes—what were we thinking???) could be picked up at Reis’ Pharmacy on Taraval Street. This was also the place to replenish all those red/green/silver foil-wrapped Hershey Kisses that were being quietly devoured daily.

For 50+ years, my father’s aunt hosted a Christmas Eve gathering in her big flat on Duboce Avenue, where her youngest child/grandchild/great-grandchild recited “Twas the Night Before Christmas”—an event that I still recall from its final days in the mid-1950s.

Most families with children opened gifts on Christmas morning, thus giving parents extra time to agonize over the horrors of “easy-to-assemble” bicycles with strangely worded instructions: “attach rail YX to crossbar L-113, tightening with prudent care to avoid any accidentals which may lead to injurious catastrophes.”

As kids grew older, many families shifted gift exchanges to Christmas Eve. By the 1970s, many people began a tradition of appetizers/drinks, then opening presents, followed by dessert and coffee. Among my own high school and college friends this celebration was often extended by attending Midnight Mass at St. Ignatius Church—a popular site for this traditional service since the 1880s when it was located on Hayes Street near Van Ness Avenue. Revelers might then return home about 1:30 a.m. to continue the festivities, often in one of those knotty-pine downstairs rooms.

Christmas morning breakfast was another popular tradition. Although the Cliff House and its gin fizzes attracted crowds, many people preferred home-based celebrations with made-from-scratch baked goods, sparkling cider, a variety of sausages, and hot chocolate on the table. Everyone was free to sleep in and to relax over breakfast/brunch while still clad in nightclothes—a wardrobe statement still favored by all of my cousins when we gather together.

In many families, Christmas dinner often resembled a replay of Thanksgiving, though with many more red/green foods (Jell-O salads, veggies, desserts). Often centered on a turkey, rib roast, or ham—plus fresh seafood among Italian families—this meal was another traditional event. Among those families that opened their gifts on Christmas Eve some opted for a more casual dinner on the 25th—thus freeing up college-age kids who happened to be home on school break additional time to socialize with their contemporaries.

Today, many family members live far beyond San Francisco, so the holidays have evolved into a two-week-long calendar of events with visiting, gift exchanges, and celebratory meals among parents, step-parents, siblings, step-siblings, in-laws, ex-in-laws, cousins, and multiple sets of grandparents/step-grandparents. Instead of a few days of festivities gatherings are now spread out—with a significant increase in the amount of driving involved, thus introducing many holiday bottlenecks—19th Avenue, the Golden Gate and Bay Bridges, US-101, and Interstate 280, to name just a few.

Still, with a spirit of good will in the air, and regardless of one’s religious convictions, most people would agree that the end of the calendar year and the start of winter is a fine time to extend good wishes to one and all—along with hopes for a very happy new year.