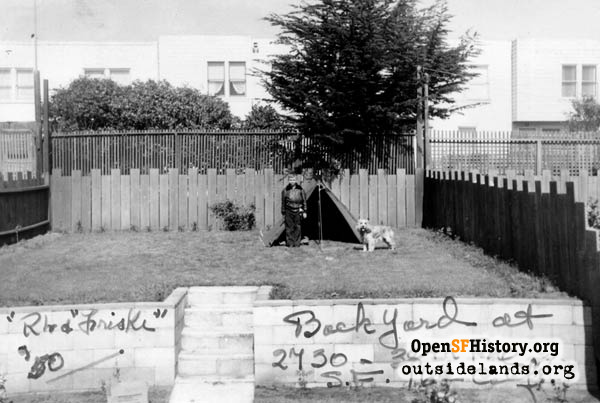 Classic and some timeless differences of opinions in the Outside Lands.

Growing up in the 1950s and 1960s, we were in and out of each other’s homes daily, interacting with our friends and their family members. Although we shared certain values and outlooks, there were several areas in which people differed—even within the same home. Here are some of the “house rules” that we all acknowledged.

Automobiles—Ford vs. Chevy was a classic one, with loyalties that could last for generations. My Dad avoided this discussion by remaining loyal to Chrysler’s products—Plymouth and Dodge—from the mid-1930s, before finally becoming a Chevy guy in 1964. The other big automotive debate involved transmissions, but once most Moms began driving, a family’s new car was invariably an automatic.

Banking—Every Italian family had a relative “who worked with A.P.” [Giannini], Bank of America’s founder, and many of these families did business there. Likewise, all newly-arrived Irish immigrants would quickly be steered to the Hibernia Bank. Such ethnic loyalties existed for most of the twentieth century, until Hibernia (founded in 1859) was acquired by Security Pacific in 1988, which was acquired by Bank of America in 1992, which was then acquired in 1998 by an obscure North Carolina institution that adopted the BofA name. Do I even have to mention that it has been nearly 40 years since the robbery at Hibernia’s 22nd Avenue and Noriega Street “Patty Hearst” branch? 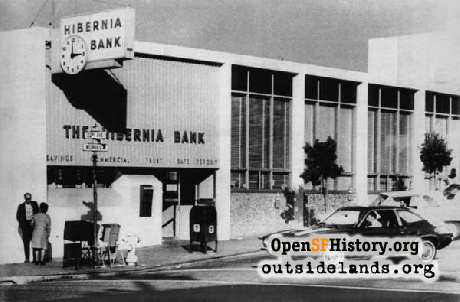 Bathing—The nighttime bath before bedtime was standard for kids, but once we were older, it was a family battle to get into the bathroom to take a morning shower. How did so many families survive with just one bathroom in those days?

Can Openers—In the 1950s, every kitchen had a wall-mounted, hand-crank can opener near the sink. By the 1960s, along came the automatic electric can opener—and what Mom wasn’t thrilled to get one of those for Mother’s Day, huh? Today, everyone has an electric model, and most young people wouldn’t even know how to operate that old wall-mounted version.

Carpets—With hardwood and parquet floors installed at the time of construction, most neighborhood homes had room-size rugs and long hall runners to protect the surfaces and to warm things up a bit. Following the lead of suburban homes (with only plywood floors) wall-to-wall carpeting became the new “must-have” by the 1960s. Today’s home buyers are often thrilled to pull up old avocado shag to find pristine hardwood floors beneath to accent their room-size rugs.

Cemeteries—Among Italian families, one debate has raged on for generations—“consecrated” vs. “unconsecrated” ground as one’s final resting place. Both the Italian Cemetery and Holy Cross continue to fill up steadily, so there appears to be no clear-cut winner here.

Christmas—Families with small children needed all the prep time possible to be ready for Christmas, so when there were little ones, opening presents took place on Christmas morning. As we became teens, attending late night adventures with friends and classmates, early morning festivities were not as much fun for anyone, hence the shift to gift-opening on Christmas Eve.

Colleges—My father and his brother went to University of San Francisco, but their many cousins, male and female, all made the trek to University of California, Berkeley. Dad’s argument for USF was that he could get to his classroom door with a single streetcar ride, while his cousins had to take a streetcar, a ferry boat, and then another streetcar to do the same thing.

Countertops—By the mid-1960s, many homes in the western neighborhoods were getting older and owners were updating their kitchens. One of the big discussions was countertop material—there were generally only two choices, tile and Formica, since the time had not yet come for granite, marble, Corian, butcher block, stainless steel, polished concrete, etc. The firm of Mayta-Jensen was highly favored, and their name in real estate ads ensured a good turnout at Sunday open houses.

Dishwashing—Once dishwashers became standard, the old argument of “running water vs. dishpan” was replaced by “rinse vs. don’t rinse” before placing items into the dishwasher. After 50+ years and numerous improvements, that last controversy rages on. There is also a corollary argument of whether or not to put “good dishes/silver” in the dishwasher, but I won’t even go there.

Dining Rooms—For most of us, these were used only for company, or for typing up high school and college term papers. No one I grew up with ate dinner there every night like TV’s Cleaver Family. 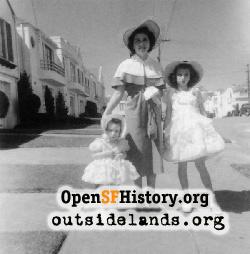 Guglielmore family in Easter bonnets on 32nd Avenue near Moraga, 1952 -

Easter—In a seeming contradiction to the Christmas Day vs. Christmas Eve debate, many families with small children celebrated Easter with dinner—ham vs. lamb being a separate Irish/Italian ethnic distinction—I suppose because this arrangement gives parents more time to get kids ready for church in the morning. As my friends and I became teens, though, it seemed that all of our families embraced the Easter brunch after church, thus leaving everyone free to pursue their own afternoon and evening activities.

Fireplaces—In our neighborhood, there were clear lines drawn—some families used their fireplaces regularly, and others were proud to have one with an unblemished brick interior. My parents were among the non-users, so naturally, when I bought my first house, one of the first things I did was to invite them over for dinner and build a fire. That never swayed them from their position, though they did seem to linger over coffee and dessert, enjoying the crackling flames.

Gifts—To save or discard gift wrapping paper? There seem to be an equal number of adherents on both sides of this question, with pained expressions on the faces of half the people in the room every time they watch the other half open a gift. Why is it that people of different beliefs on this issue invariably end up in the same family?

Hanukkah—Celebrate first-night or all eight? The answer was usually directly proportional to the number of young children in the household.

Laundry—As automatic dryers became popular, clotheslines began to disappear, forever changing the landscape of backyards—yet there is still something special about falling asleep in a bed made up with freshly laundered cotton sheets that were hung out to dry on a clothesline.

Manners—At home, it was generally easier to get through a meal when parents gave in to a few childhood preferences—like my lifelong aversion to green peas. If, however, we were invited to dinner at a friend’s house or if we had company, heightened table manners applied—summed up nicely as: “Just hold your breath and swallow whatever is served.”

Monopoly—Every family tweaked Monopoly’s official rules slightly—mostly by placing a certain amount of money (a $500 bill from the bank at the outset of the game or sometimes all the fines required by Chance and Community Chest cards) into the middle of the board, to be collected when a player landed on FREE PARKING. Extra turn when rolling doubles? Does the Bank make extra money, houses, or hotels when it runs out? Check the “house rules” in advance.

Newspapers—When San Francisco still had two morning newspapers, Democratic households read the Examiner and Republican households read the Chronicle. One incident caused readership defections, though, and that was when columnist Herb Caen (1916-1997) switched papers in a contract dispute. After twelve years of writing for the Chron, Caen moved to the Ex in 1950, and some 50,000 loyal readers followed. When he returned to the Chron in 1958 for his remaining 39 years, that same crowd of 50,000 followed him right back. On Sundays most neighbors had their newspaper delivered, while others bought a copy outside the nearest Catholic church. A very few households bought the Sunday paper late on Saturday, and that just seemed odd.

News Programs—Walter Cronkite (“And that’s the way it is…”) took over the New York-based CBS Evening News in 1962 and presided there until 1981, rightfully earning his title as “the most trusted man in America.” Yet there were some households that favored the Huntley-Brinkley Report (“Good night, Chet—Good night, David), which ran from 1956-1970, featuring anchors from both New York City (Huntley) and from Washington, DC (Brinkley). I’m still trying to remember what made people favor one program over the other, but I’m drawing a blank.

Pets—For our neighbors who had pets, there seemed to be more dogs than cats. Given the big backyards, and the fact that most Moms were home during the day, dogs could easily go in and out at will. Today, with many homes sitting empty while everyone is at school or work, the self-sustaining cat population is outpacing the dog group. And it was a rare parent who could say no to a child’s desire for a pet. Even the most adamant (like mine) would eventually bow to pressure and make room for a couple of goldfish won at the local parish festival. 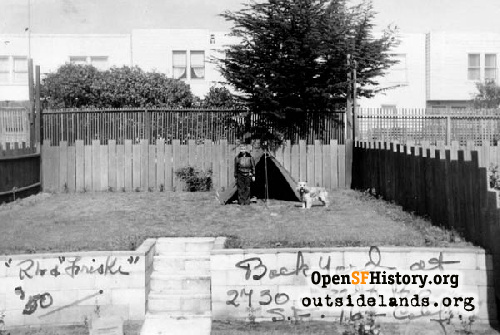 Politics—Our neighborhood was pretty evenly divided between blue and red households—and some were divided within themselves—don’t even think about discussing politics there!

Shaving—When it came to shaving most Dads preferred a blade, single or double-edge. The few who once used a straight razor were universal in the comment, “That was thrown away the day we brought the first baby home.” Some guys, like my uncle, preferred electric, and that’s what I started with, but sometime in college, it just seemed easier, faster, and more comfortable to shave with a blade, and that’s what I’ve done ever since.

Stoves—Most western neighborhoods houses had gas stoves, but by the 1960s electric ranges began offering self-cleaning ovens and there was a gradual transition, including the term AEK (all-electric kitchen) in real estate ads. By the 1990s, however, many home buyers were opting for restaurant-style gas models.

Synagogues—Join a newer congregation in the western neighborhoods (Temple Judea on Brotherhood Way, Beth Sholom at 14th Avenue and Clement Street, or one of several smaller congregations on Clement, Noriega, Quintara, Taraval), or continue to journey back to the Western Addition for worship at a family’s traditional Temple—Beth Israel on Geary near Fillmore Street, Sherith Israel at California and Webster, or Keneseth Israel on Webster Street near McAllister?

Taxes—Moms and Dads sitting at the kitchen table after dinner every night with shoeboxes full of receipts meant that it was April. No one we knew ever went to a “tax preparer,” but today, no one I know feels capable of performing this task without professional help.

TV—Most homes had exactly one, so when Perry Mason and Bonanza were broadcast opposite each other on Saturday nights, 1959-1961, there were family disagreements throughout the neighborhood, resulting in many people joining like-minded neighbors who watched the same program. I spent many Saturday nights with the Greenblats to watch Ponderosa adventures. Come to think of it, this was the time that many families started acquiring a second TV for the master bedroom.

Undertakers—It used to be Carew & English, but now Arthur J. Sullivan (himself an Outside Lands resident on 22nd Avenue) seems to be the popular choice.

Window Coverings—Mr. Doelger and other builders must have had stock in venetian blind manufacturers, since virtually every home had these installed in the front windows. Then things began to change, as suburban homes featured drapes that could be opened and closed, keeping the house warmer in winter. However, this had the unanticipated effect of letting everyone know just who was watching the neighborhood. Mom and her long-time friend Dorothy across the street went with draw drapes eventually, but only in addition to venetian blinds. The two of them would say, almost in unison, “I don’t want the neighbors to know that I’m watching…”

Such were some of the “house rules” that we all knew and observed for years, growing up in the Outside Lands.