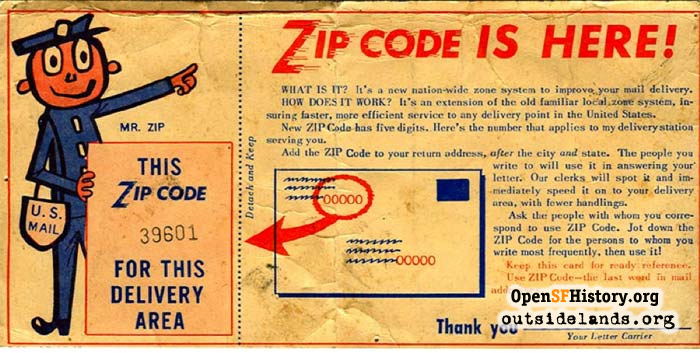 How Mr. Zip and the Zone Improvement Plan Gave us a New Sense of Place.

It's hard to believe that a smiling little character that many of us still recognize, Mr. Zip, will soon be turning fifty. That iconic image was the United States Postal Service's official mascot for the introduction of ZIP Codes back in 1963, and he is about to celebrate the big birthday by which AARP defines "senior citizen" for millions of us. How did he come about, though? 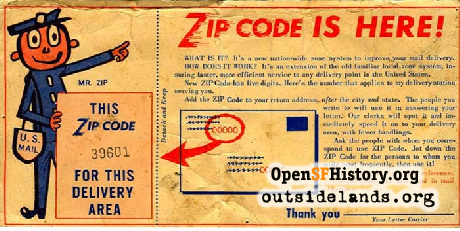 In the 1940s, the Post Office introduced the "zone plan" to major U.S. cities, dividing delivery areas along the lines of existing Post Office stations, and then assigning a two-digit numerical code to each, resulting in addresses such as:

Work soon began on developing a better nationwide delivery system. This plan included three-digit identifiers for thousands of regional Post Office distribution facilities, combined with a two-digit sub-area, similar to the zones used in large cities. In order for a five-digit code to work, though, more spaces in the last line of an address were required for numerals, so there also needed to be shorter, two-letter state abbreviations--no more "Mass." or "Penna." or "Calif." In addition, there was often confusion at the time when the abbreviation "Col." (for Colorado) was misread as "Cal." (for California when "Calif." was the preferred Post Office designation at the time). There were also issues with "Mis." (never an official abbreviation) carelessly used on mail addressed to both Missouri and to Mississippi. Tens of thousands of staff hours were wasted annually when the Post Office had to determine if a letter was intended for Washington the state, or Washington the District of Columbia.

The name ZIP itself is an acronym for "Zone Improvement Plan" and at the time it was heralded as being the salvation of the U.S. Post Office, which was then drowning in a sea of paper--letters, post cards, mail order catalogs of every sort, new credit card monthly billing statements and payments, frequent sales promotions from downtown and mall retailers, plus mass solicitations for everything from diapers to cemetery plots. The new codes and standardized state abbreviations, plus several other innovations--automated sorting facilities, character recognition of addresses on business mail, a gradual transfer of mail delivery contracts from the railroads to the airlines, and an effort for one-day local letter delivery and second-day delivery of a letter between virtually any two points in the continental U.S. were all parts of a massive effort to improve efficiency in the entire operation in the 1960s.

Finally, on July 1, 1963, the new five-digit ZIP Codes were introduced to the public, along with space-saving and consistent two-letter state abbreviations, so that henceforth a local address would read:

The Post Office then launched one of the nation's biggest advertising campaigns in history, putting Mr. Zip everywhere--posters in public buildings, radio and TV ads, promotional materials for school children, reminders on cancelation messages on billions of envelopes, stickers on every public mailbox, as well as printing reminders on the edges of sheets of stamps. Still, it was a rocky start, with public enthusiasm only lukewarm. (Does anyone remember the short-lived 1975-76 Federal campaign urging Americans to "Go Metric?") 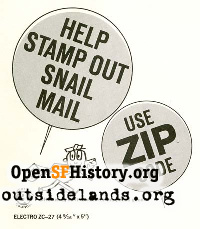 The Post Office had the right idea, though, with voluntary introduction, and in 1967, ZIP Code use became mandatory for business mailings when senders wished to receive the Post Office's best discount prices. Once that requirement was enacted, every soul in the United States was soon receiving ZIP Code addressed mail virtually every single day, and the use of ZIP Codes became standard, as businesses required their customers to provide a ZIP Code for deliveries.

As Mr. Zip reaches fifty, there are now over 42,000 ZIP Codes in the United States. Approximately 32,000 of these are also used by the U.S. Census Bureau as "ZIP Code Tabulations Areas"--ZCTAs--for publishing statistics on various characteristics of the country's population, with the other 10,000 or so ZIP Codes being unique to Post Office boxes and high-volume mail recipients such as corporations, etc.

In addition to categorizing Census Bureau statistics, ZIP Codes also touch many other aspects of our lives today. Call an insurance company and ask for a rate quote on auto or home insurance, and the first question you are likely to be asked is, "What is your ZIP Code?" Those who wish to trace crime trends in an area will find much of the information reported by ZIP Code. Real estate agents often cite average sales statistics based on a home's ZIP Code. Non-postal delivery services such as UPS and FedEx will not even accept a package for delivery if the destination ZIP Code is not listed. ZIP Codes are also used to identify legislative districts--the website of the U.S. House of Representatives instructs users to "Enter ZIP Code" in order to "Find Your Representative." Credit card companies use a customer's billing ZIP Code as an identifier, such as when you pay for gasoline at the pump, and the screen prompts you to "Enter Billing ZIP Code". Even Internet Service Providers use a customer's ZIP Code to customize advertising by showing merchants and services from a subscriber's local area, while so-called "brick and click" merchants--those with both a physical and on-line presence--can now display the inventory level of a particular item at locations that are close by the customer. 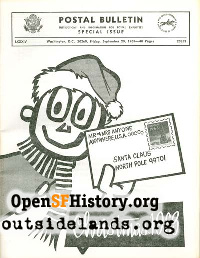 By 1983, the Postal Service began introducing an expanded ZIP Code, known as ZIP+4, which can identify urban addresses down to the level of an exact city block. While the public's use of ZIP+4 remains voluntary, it soon became a requirement for business mailers who wished to make use of the lowest mailing rates.

Once assigned, ZIP Codes seldom change, unless an area undergoes a significant transformation. In the early 1980s, Santa Rosa, California saw rural farm lands being converted to housing at a rapid pace, such that the original ZIP Code of 95401 became overcrowded with downtown addresses, rural addresses, and new subdivision homes, hence the new western residential neighborhoods were spun off into a new 95403. Later, as further homebuilding took place in the southwest neighborhoods, replacing much of the older industrial establishments, a new 95407 was introduced. And while most cities have a unique ZIP Code that is not shared with other cities, nearby Colma, California, with only 500 living residents, must share 94015 with adjacent Daly City. In some rare cases, if a community becomes depopulated, a ZIP Code might be dropped. This unusual circumstance occurred when the town of Centralia, Pennsylvania had to be abandoned because of persistent underground fires in the coal mines. Once the city was completely uninhabited by 2002, the Postal Service "retired" ZIP Code 17927. Some parts of Detroit may someday have their ZIP codes deleted because of extensive abandonment of large parts of that city and the city-ordered demolition of tens of thousands of decaying homes.

Sometimes institutions have even moved themselves to a preferred new ZIP Code. In the late in the 1960s, the University of San Francisco, long-established at 2130 Fulton Street, found itself having to deal with a Post Office located at Haight and Clayton Streets in the city's Haight-Ashbury neighborhood, which was then becoming overrun with hippies and tourists. Whether it was intentional or not, USF quietly changed its "official" address to 650 Parker Avenue without a great deal of fanfare, thus moving itself neatly from 94117 into 94118 so that it would fall under the jurisdiction of a different Post Office station in the Richmond District.

As Mr. ZIP turns fifty, so does the Post Office's Parkside Station. It opened an incredible fifty years ago this fall on the northwest corner of Taraval and 28th Avenue. The modern streamlined look of yellow brick and plate glass on the exterior, and light color counters, walls, and floors on the inside, replaced an older, much smaller location on the south side of Taraval near 21st Avenue. In the new building, delivery trucks could back up to loading docks that were off the street, rather than blocking pedestrian and vehicle traffic the way they did at the old place, which had its loading docks wrapping around behind Overland Pharmacy on the corner, and opening directly onto 21st Avenue. The new facility was fluorescent lighted, rather than the old hanging pendant lamps with a single bulb at the previous place, and air-conditioned as well. Dad was the manager of that station when it first opened, and he thoroughly enjoyed working in such a modern building that was so close to home.

As so many other Outside Lands institutions are turning fifty—the "new" Scottish Rite Temple at 19th & Sloat is also fifty years old this year, while the "new" Lowell High School just marked its half-century on Eucalyptus Drive, and the "new" Temple Beth-Israel-Judea on Brotherhood Way and the "new" Holy Name Church at 39th and Lawton will both be celebrating their golden milestones in 2014—it's hard to imagine how quickly the next half-century will likely speed by, bringing even more changes to the scenery of the western neighborhoods.

More on Mr. Zip from the Smithsonian Postal Museum site.