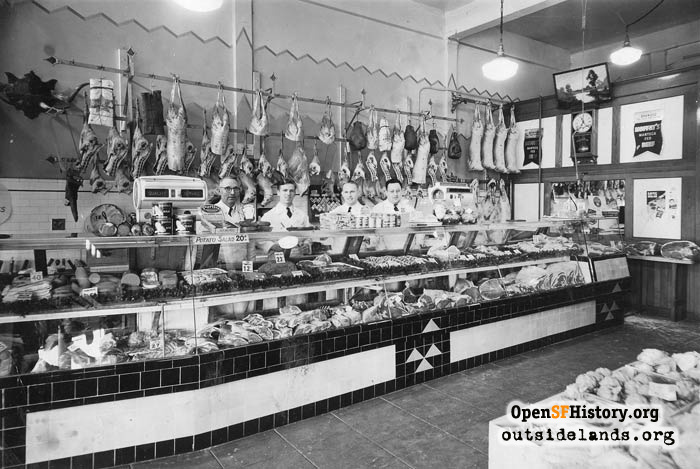 The transition of shopping from the corner store to downtown to online.

Our old friend and long-time WNP member, the late Will Connolly, used to say that shopping in San Francisco was a highly geographic activity. Things you might need regularly, such as groceries, newspapers, and aspirin could usually be purchased very close to home—mostly within walking distance—while major expenditures like automobiles, furniture, and appliances generally required a trip downtown. Everything else (clothing, kitchen curtains, paint/hardware) could often be found somewhere in between. His theory held true for decades, though that is no longer the case.

Neighborhood shopping areas, such as 16th Avenue and Irving Street, 22nd and Taraval, 23rd and Clement, 24th and Noriega, 37th and Balboa, and many others, generally contained several different businesses within a couple of blocks: grocery stores, produce shops, bakeries, pharmacies, and laundries/dry cleaners. There were usually a couple of banks, barber shops/beauty salons dotting the area, and there might be a small restaurant and/or a popular neighborhood watering hole nearby. Many people walked to undertake their shopping tasks, though there was also ample street parking in the 1950s and 1960s, when car ownership in the city was becoming nearly universal. 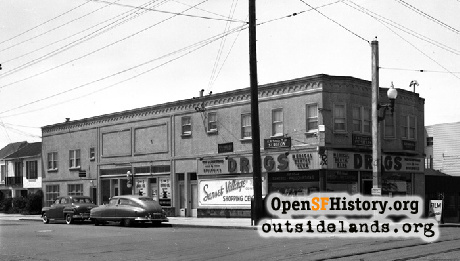 Excursions for things like clothing and household accessories often took residents a bit farther from home—to places like inner Clement Street, Laurel Village, Ocean Avenue (both the Ingleside and Lakeside neighborhood shopping areas), or West Portal Avenue—all of which held a wider variety of business than could be found in the smaller retail blocks. Independent clothing stores specializing in men’s, women’s and children’s apparel dotted these larger areas, at least until the early 1950s.

Stonestown Mall, which opened in 1952, boasted the first branch store of the iconic Emporium chain. No longer did customers have to travel to Market Street to buy a suit, luggage, or sofa, since these things were now readily available closer to home. The presence of the Stonestown Medical Building also provided a convenient location for various medical and dental appointments, thus saving patients from a trip downtown to locations such as 450 Sutter Street or 490 Post Street. Even grocery shopping began to undergo a tremendous change with the opening of the popular Stonestown Market (later Petrini’s), thus replacing many corner food stores. With dozens of retail outlets featuring clothing, plus other stores such as Gallenkamp Shoes, Singer Sewing Machines, Glee’s Health Foods, and even a Woolworth’s, Stonestown offered shoppers virtually everything in one location.

Also opening in the same era was Lakeshore Plaza, on Sloat Boulevard near 34th Avenue, serving the nearby communities of Lakeshore and Country Club Acres, though also a destination location for residents from other areas. With a large Lucky supermarket as the anchor tenant, other spots in the complex included Crown Drugs, Grant’s Charcoal Broiler restaurant (later, Orlando’s—owned by Giants baseball star Orlando Cepeda), and a mix of neighborhood shops including hardware, barber shop, beauty salon, etc. By the late 1950s, though, the mix at Lakeshore Plaza began to change with the arrival of a local discount chain, GET (the acronym standing for Government Employees Together), a membership retailer open only to employees of local, state, and federal government agencies. Beginning from a location at the mid-point of the western side of the parking area, the chain, popularly known as "GETs," initially took over a few vacant storefronts, filling them with discounted housewares and clothing items. 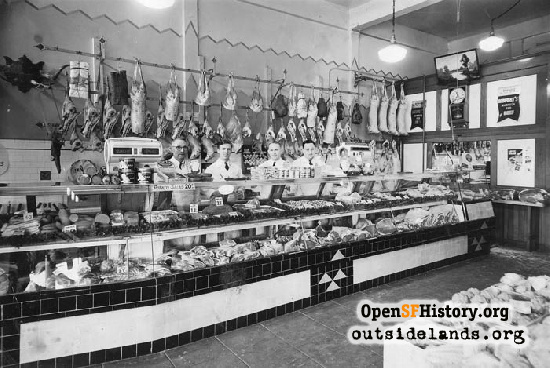 Entering the main portion of the store, customers passed by a glass-enclosed office area where a group of ladies staffed a switchboard and buzzed open the entrance door to the sales floor after seeing each customer’s membership card. As time went on, the retailer took over more adjacent vacant stores, punching a hole through the dividing walls and connecting the different elevations with short staircases. Overhead was low, the lighting was glaringly fluorescent, and prices were good, thus sparking a great deal of interest from local shoppers. Purchases were bagged and sealed with special tape printed with the GETs logo—with a different color used each day to thwart would-be shoplifters. Eventually, GETs took over virtually all the storefronts on both sides of the parking area, including departments for drugs and sundries, toys, locksmith, hardware, cameras, etc. By the late 1960s, GETs morphed itself into a new membership store called GEMCO, and later, the area reverted to individual retailers selling very cheap goods, before the complex was torn down and replaced with the present shopping center and its very cramped parking lot.

Again, Will’s theory included the fact that San Francisco residents usually traveled some distance from home for large purchases. For decades, furniture and appliances were generally found at stores on Market Street (such as Sterling Furniture that pre-dated the 1906 earthquake/fire) or various stores on Mission Street (Lachman Brothers and Cherin’s were in business prior to 1906, and Redlicks opened in 1906 to supply San Franciscans with replacement household items for what had been lost in the disaster). Once Sears, Roebuck and Company opened its “modern” store at Geary Boulevard and Masonic Avenue in 1951 (with the ever-present smell of popcorn throughout the building), such purchases could easily be made closer to home for many residents in the western neighborhoods. Dad was a regular Saturday afternoon visitor to the hardware department at Sears—one of the few shopping excursions that he truly enjoyed. Soon, small furniture and appliance stores began to spring up on parts of Clement, Noriega, and Taraval Streets, though few remain today.

For decades, most city residents purchased automobiles from dealers located along Van Ness Avenue’s “Auto Row”. By the 1950s/60s, however, many auto showrooms began to spring up in the western neighborhoods, including Kreiger Oldsmobile on Geary just west of Masonic, Golden Gate Chrysler-Plymouth at Geary and Parker Avenue (site of the present post office), a Buick dealer (operating under several different names over the years: Brown/Nelson/Herrera) at Geary and Arguello Boulevard, Carlsen Volkswagen at 19th Avenue and Ortega Street, Spencer Buick (later Holiday Chevrolet) at 17th Avenue and Taraval Street, Avenue Rambler on Taraval near Funston Avenue, Fazackerly Cadillac in Stonestown, Wayne Pontiac on Ocean Avenue near Brighton Avenue (now the site of a McDonald’s outlet), and C. M. Murphy Oldsmobile (with a new model parked in a brightly lighted display window on the third floor level) at the junction of 19th Avenue and Junipero Serra Boulevard. All of these dealers have now disappeared, and since early in this millennium, it has been impossible to buy a new American-made car anywhere in the City and County of San Francisco. Although Van Avenue is still home to many dealers selling imported cars, all the American manufacturers have relocated their new car showrooms to San Mateo County—primarily to a newer “Auto Row” in the town of Colma. 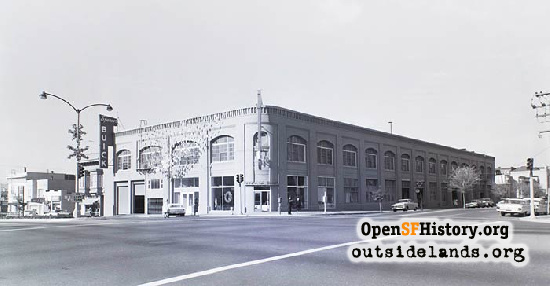 By the late 1980s, it began to feel that neighborhood shopping areas were being over-run with banks and savings/loan institutions, leading the city to regulate the mix of businesses in several. Today, there is a wide-spread perception that these small business districts are overwhelmed with coffee bars, cell phone stores, and nail/manicure shops—to the extent that shoe repair shops and hardware stores have become endangered species in many parts of San Francisco. More than a decade ago, city government set up a program of formal resistance to what are known as “formula retailers”—that is, chain stores. It’s been a noble effort, but the results are still not clear as to whether or not the restrictions have had a positive impact on city life.

Today, sad to say, many people hop in the car for a drive to a big-box store, often located across the line in northern San Mateo County. Whether it involves painting supplies at Home Depot, shoes at one of the many huge outlet stores near Serramonte, groceries at Costco or 50-pound bags of pet food, shopping is no longer what it used to be. And now people do online shopping for everything, from books to clothing to groceries to home furnishings, at websites from Amazon to Zappos, and thousands in between. From the comfort of your own desktop computer (or tablet, smartphone, etc.), it is now possible to buy virtually anything, from anywhere, at any hour of the day or night, 365 days a year—often with free delivery to your own front door.

Shopping is local all right—in ways that Will and many of our other predecessors could never have imagined.