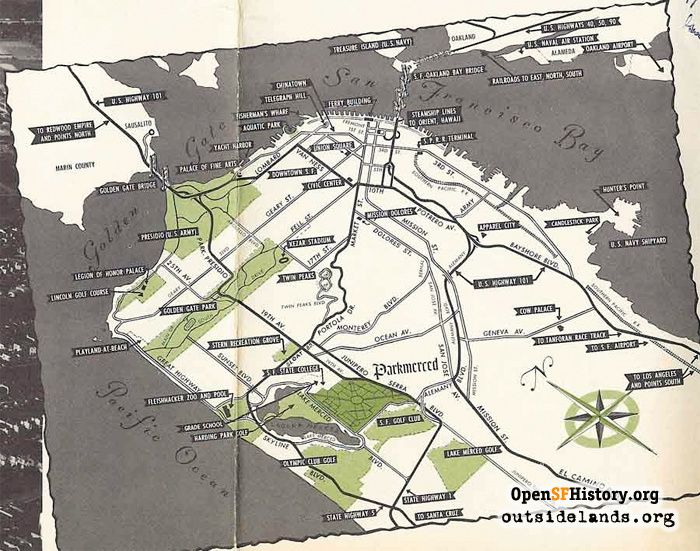 The past and future of Parkmerced.

Now that the holidays are over and many of us are now in the midst of clearing away the last of the lights, tinsel, and crumbs of sugar cookies and Chex mix, it’s time to get back to examining some of the changes that are now taking place in our western neighborhoods.

One of the biggest undertakings in decades is now beginning to evolve in the southwest corner of San Francisco near Lake Merced. Parkmerced, the sprawling apartment complex that pre-dates World War II, is about to undergo a massive transformation that will increase both residential density and also open space. First, though, a bit of historical background…

Originally developed by the Metropolitan Life Insurance Company beginning just before World War II, Parkmerced was a community of low-rise, one- and two-story apartments, built around central courtyards that contained an abundance of lawn and trees—suburbia in San Francisco, so to speak. Designed by architect Leonard B. Schultze and landscape designer Thomas Dolliver Church, the first units on Font Boulevard were initially occupied during the World War II years. Shortly after the conclusion of the War, when the City was facing a housing shortage because of an increasing population (including the return of tens of thousands of GIs, many of whom were starting families of their own), Parkmerced expanded, including the construction of 11 new apartment towers consisting of 13 floors each—an addition of well over 1,500 new units—that were constructed in a way that interspersed them among the garden units. For decades, there were about 3,500 homes located in the complex. Read more about the state of the residential complex during the 1980s in a 2006 Streetwise column by Woody LaBounty.

My own father, a returning GI himself, though having purchased our family’s home in 1948, was perpetually annoyed at Metropolitan Life for leaving these new tower units vacant for years during the Korean War when rent controls were temporarily in place. In an extraordinary bit of non-civic-mindedness, Metropolitan Life did not put the units on the market until a few years later when rent control was no longer in force. In another glaring example of behavior that would not be tolerated today, Metropolitan also followed a clear pattern of racial discrimination, limiting residency of their housing units exclusively to those of the Caucasian race. Following a 1970s lawsuit by a Caucasian resident, Parkmerced agreed to rent to all qualified applicants.

Traditionally, the community was a quiet place, with a reputation expressed in the somewhat sarcastic phrase “a place for the newly wed and the nearly dead”. While there were always large numbers of recently married couples along with many retirees, the community was also home to many families and singles who found it to be a convenient and affordable place to live, with easy access to locations in San Francisco as well as on the Peninsula. The adjacency of Stonestown, MUNI service to the downtown area, and recreational opportunities of Lake Merced were additional plusses to life in the southwest corner of San Francisco. 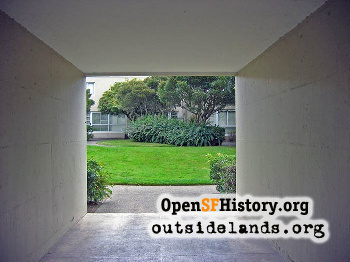 As time went on, though, Metropolitan sold its interest and the complex passed through a variety of corporate hands, some of which were not always noted for maintaining the property with the same level of care shown by the developer. In addition, portions of the complex, including several blocks of apartments near Holloway Avenue were sold to adjacent San Francisco State University early in this millennium, thereby reducing the size of present-day Parkmerced from about 3,500 units to just over 3,200.

A couple of droughts and decades of deferred maintenance, along with increasing technology all began to take a toll on the garden units in recent years. While the apartments were “modern” by 1940s standards, shortages of building materials in that era contributed to less than optimal construction standards. Electrical outlets can be few and far between in some units, wireless service is spotty, kitchens and baths are often pre-World War II vintage (though some have been remodeled in recent years), and parking has often been a challenge.

As a one-time Parkmerced garden apartment resident from 1976-1978, I can personally confirm these limitations, along with many other drawbacks: rusty water, clogged drains, blown fuses, and a lack of both weather and sound insulation in most of the floors, walls, and windows. I always knew when my elderly neighbor was watching the CBS Evening News because Walter Cronkite’s voice came booming through our shared walls quite clearly. Those garden apartments were in need of some serious upgrades when I lived there 40 years ago, and the situation has surely grown even more pressing today. 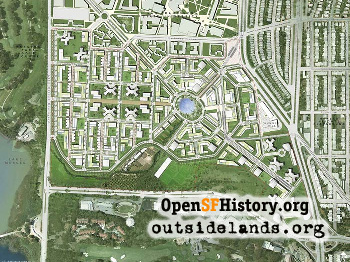 A new corporate owner unveiled a comprehensive renovation plan for the entire complex in 2006. Parkmerced Vision was rolled out in a series of neighborhood meetings that began more than ten years ago. The proposal included retaining the 1,683 newer units in the 11 tower buildings, along with the demolition of the 1,538 garden units, many of which are 75 years old.

The original material shortages of the early 1940s, decades of deferred maintenance, and the lack of accessibility in the garden units (virtually all of them have exterior, and in some cases, interior stairs) were just some of the factors that caused designers to recommend replacement rather than renovation for these particular units. In addition, City policy has long favored implementing greater density in most neighborhoods when there is wide-spread renewal taking place.

In place of the garden units, there will be 1,538 replacement units built, plus an additional 5,679 net new units constructed in dozens of new mid-rise and high-rise buildings, for a grand total of 8,900 units vs. the 3,221 of today. Present-day amenities will be standard in all these units, along with enhanced fire and earthquake safety features and universal accessibility.

Naturally, such drastic changes were a hot topic of community discussion—both within Parkmerced and throughout San Francisco. After much debate, the San Francisco Board of Supervisors approved the redevelopment plan by a 6-to-5 vote in May of 2011. Like many other large-scale local projects, there were multiple court challenges by parties who were not supportive of the plan. After years of negotiations, compromises, and often-contentious public meetings, construction has now been given the green light to proceed.

The new plan includes a number of protections for current residents, including:

Some of the new features that will enhance the community’s overall appeal during the course of the 20-year project will be:

The actual development plans for the first phase have been submitted for City approval and construction is expected to commence in May/June of 2017. Initially there will be utility and street work, followed by construction of eight new buildings on land that is presently open space, with the first tenants moving into their new homes in about 2019. The first new buildings will be:

Upon completion of these new buildings over the next few years—2019-2021—relocations of tenants into the new homes will begin, followed by the demolition of the 1,538 old garden units. Once demolition of the old units has been completed, construction will begin on re-configuration of some internal streets, in phases, plus the construction of dozens of additional new buildings—a combination of low-, mid-, and high-rise—beginning in about 2020 and running for 15 more years.

With a resident population of between 9,000 and 10,000 individuals today, the neighborhood will almost triple to about 28,000 people at the time that construction is set for completion in 2035. Yet, an increase of open space will be realized upon completion, because the plan calls for building UP rather than OUT.

All of this tells us that the western neighborhoods will likely remain a popular home for old and new San Franciscans alike well into the coming century.