Streetwise - Ringing Out the Old

Streetwise - Ringing Out the Old

Having achieved sixty New Year’s celebrations (with no arrests or serious health impairments), it’s time to look back at what those festivities have been like.

Growing up with older parents—they were 37 when I arrived as their first-born—New Year’s Eve was always a pretty sedate day in our family. It was a day for the occasional drop-in visit from some cousins or long-time family friends who had not been able to see us earlier. A bowl of Chex mix and bit of cheer would be the order of the day for any afternoon guests. Dinner was just family at the kitchen table, with Mom turning the last remnants of the Christmas turkey into some sort of casserole and then making soup—she always wanted that turkey carcass GONE from her refrigerator before leftovers from the New Year’s Day ham began to occupy a big chunk of space. After one chorus of Guy Lombardo playing Old Lang Syne in New York at 9 p.m. Pacific time, it was beddy-bye time.

High school days meant getting together with friends and the knowledge that someone would liven up the evening by slipping some alcohol into the festivities. I have clear recollections of being the designated driver more than once, with a passenger or two suffering some serious indigestion on the way home along 19th Avenue, and then some impromptu car washing in my parents’ driveway at 4 a.m.

In college, my Univeristy of San Francisco classmate Debbie always hosted New Year’s Eve dinner at her mother’s home at 27th Avenue and Balboa Street. Then in my early working years, a group of co-workers and I would go out for dinner to someplace other than “the Big 3”—Chinese, Italian, or Mexican—before going on to a club or a concert. One year it was Ethiopian food, Rasselas on California Street, once it was Peruvian, Alejandro’s on Clement, and once it was Moroccan, Mamounia on outer Balboa (all now moved or long-gone). Then for a long stretch of years in the 1980s and 1990s when I lived on 22nd Avenue, I hosted a New Year’s Day open house for family, friends, neighbors, and coworkers. Leaving everyone to their own devices for December 31st, we gathered in the early afternoon of January 1st for finger food and champagne, with a couple of Stouffer’s lasagnas tucked into the oven for anyone who was still standing by dinnertime. At all of these events, a good time was had by all. 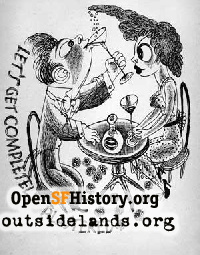 Over-imbibing is not in the New Year's Eve schedule these days. - Art by Lloyd Hoff for "Where to Sin in San Francisco," by Jack Lord & Jenn Shaw, 1945.

Finally, in the mid-2000s, after the passing of the last of our parents, some of my cousins and I began celebrating New Year’s Eve together. Our affection for one another goes back to our mutual great-grandparents, born in Ireland, who came to America in the early 1880s, settling in the mining town of Leadville, Colorado to raise nine children. Those ancestors—parents, children, aunts, uncles, and cousins—all moved to San Francisco in 1907 in order to help a recently widowed relative and her infant. Our grandparents grew up together in the City, attending school, marrying, and remaining neighbors as adults, before progressing, after many decades, to the town of Colma. Our parents were born in the City in the years around World War I, and also grew up as one big extended family. As they married, we all came along in due course between 1946 and 1956—always at St. Mary’s Hospital except for one premature arrival in San Mateo County—and we second cousins saw each other at first communions, confirmations, graduations, family weddings, funerals, and milestone birthday parties for the older generations.

We now celebrate the New Year over a period of several days, at a different house each time, at homes in California, Arizona, or Colorado. With staggered arrivals, some get there in time for Christmas, others just a day or so later, and sometimes on December 31st itself. Along with spouses, children, and grandchildren, we greet each other with expressions of warmth often seen only in Hallmark commercials. Our gift exchanges are few and far between—being together is the real gift—but we occasionally indulge ourselves with favorite edibles, a new board game, or a blow-up of some wonderful old family photo. One item received by this year’s host couple was a small plaque, now hanging in their kitchen, with the tongue-in cheek phrase: “REMEMBER—As far as anyone knows, we’re just a normal family.”

No matter which of us plays host in any given year, seasonal decorations abound (“too much” is simply not applicable when we celebrate). Our Christmas trees have enough lights to strain the resources of any electrical panel, and we keep them blazing until the Wise Men arrive January 6, while also managing to burn more candles than the Vatican itself. We all know where certain ornaments came from, and we are all prolific senders/receivers of Christmas cards, all of which are on display. It is against this backdrop that we welcome in the New Year.

Everybody occupies the kitchen during our visits. Most of us arrive with a cookbook, a few tattered index cards, or a favorite recipe committed to memory, the way Grandma used to cook. Being Irish, the evening drink is a cherished ritual, though we do not to overdo a good thing. While we might be challenged by a field sobriety test, all of us are firmly IN for the evening, so the buzz we enjoy presents no danger to ourselves or others. Grandma was always proud of the fact that no one in her family ever had or caused any serious trouble because of the Irish love for drink, and we continue to uphold that tradition. Seated around a blazing fireplace, we update one another on our lives, while keeping a collective eye on dinner’s progress.

We then take our places at a long, red-draped table, ablaze with candlelight and with spouses, children, and grandchildren—there will be seventeen this year. Wine flows and more confidences are exchanged, as we eat, reminisce, and talk of the past, present, and future. Standing behind our chairs are the ghosts of those long-gone ancestors that all of us love and remember—their grandfather and my grandmother were brother and sister, their father is my mother’s first cousin, born a year to the day apart and raised like siblings next door to one another, and our grandparents shared all the same wonderful siblings and parents. We mimic the voices of those who are no longer with us, retelling favorite stories, and laughing out loud at some of the almost-forgotten tales of the lives and the romances of long-gone great- and not-so-great aunts and uncles. The younger ones watch in wide-eyed amazement, reflecting on what we believe is so very funny, yet slowly taking it in so that someday in the future, they will also be saying, “Remember when…” to a whole new generation.

Then we stay up late, watching videos or playing board games. Some nibble leftovers or munch goodies from strategically placed candy dishes, while siblings chat quietly, cousins interact, someone settles in for a nap, and kids blend into the conversations enough to receive a good glimpse into what life was like a generation or so back—think of Woody Allen’s film, Radio Days.

As midnight approaches on New Year’s Eve, champagne is poured, noisemakers and hats distributed, and everyone shares what they are leaving behind from the past year, the hopes that they have for the twelve months ahead, plus a few words of heart-felt, spoken-out-loud gratitude to each of the others seated around the room. This year we are all grateful for a trio of milestone birthdays (55, 60 & 65), two members with vastly improved health situations, and best of all, one tiny new baby who is a real joy to everyone.

Then it is New Year’s Day, the high-point of National Pajama Week as far as we are concerned. Throughout our visit, we emerge slowly from our cocoons each day, clad in a variety of robes and nightclothes—though there is always one renegade who is freshly showered, groomed, and dressed before making an appearance. Whoever is up first is responsible for plugging in the Christmas tree lights and pressing the start button on the coffeemaker. We take and discuss morning pills, as newspapers—both real and electronic—are consulted so that everyone can check sports scores, horoscopes, comics, or Dear Abby, while others read email. True to our genetic upbringing, everyone has to view the San Francisco Chronicle obits—the apples did not fall far from the tree in this family! Then we watch the Rose Parade along with bits and pieces of various football games. Meanwhile, everyone continues to sip coffee from the oversized mugs that seem to exist in all of our kitchens.

After another day or so of this delightful routine, with the calendar signaling the end of the season, we realize that our get-together is ending. As we take our leave of one another, we are all aware that many of us are now at more advanced ages than some of our parents, grandparents, and other relatives ever were. We’re not exactly rocking chair material yet, but we can all do the math. We talk of our next gathering—which state, whose house—gradually firming up details for our next celebration.

Thus are the traditions of one group of 1950s kids from San Francisco.