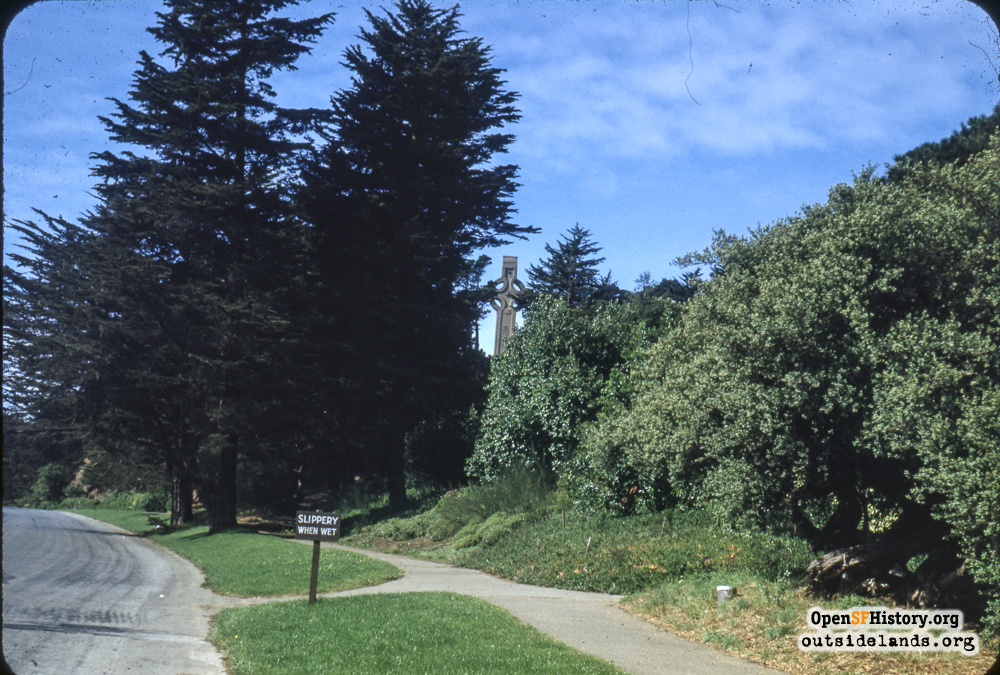 Remembering west side parks and playgrounds.

Growing up in the Parkside in the 1950s and 1960s usually meant playing in the street on our almost-cul-de-sac block of 18th Avenue. Traffic was very light, there were few parked cars to get in the way, and street games could go on uninterrupted for long periods of time—or at least until the street lights came on. St. Cecilia's schoolyard, just a half-block away, also received regular use after school and on weekends. As we grew older, however, we began to discover the wide variety of public parks and playgrounds, circles and squares that still dot the entire neighborhood. Here's a brief look back at several that I remember the most. 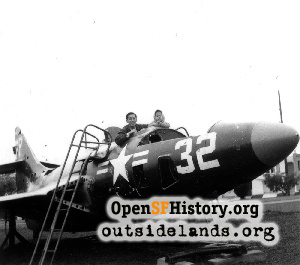 Larsen Park—We all grew up hearing about the generosity of old Carl Larsen, who donated two full blocks of land to the City for recreational purposes. His gift is memorialized by an enormous rock with a metal plaque at the corner of 19th Avenue & Ulloa Street, at the northeastern tip of the park near the baseball diamond.

The swings and slides at the corner of 19th Avenue & Vicente Street were visited regularly when Mom and I used to take our weekly walks to Taraval Street in the early 1950s, and Dad and I used to walk down there on Sunday mornings when I was four or five to play what was loosely called "tennis" on the courts—there were never enough adults waiting that a pre-schooler and his Dad couldn't be there, just bouncing a ball back and forth.

The addition of a decommissioned jet fighter plane in the southernmost part of the park just across Vicente Street (a navy blue model installed circa 1959 or so, and an updated gray version in about 1972) made a good playground even better. There was great neighborhood excitement when the adjacent pool was built in the late 1950s, and much surprise and consternation when it had to be torn down and replaced less than 50 years later.

Larsen Park was also the favored neighborhood spot for spring kite flying—no overhead power lines—and passing motorists often saw groups of happy kids at play. Students in the upper grades of nearby St. Cecilia School were taken to the park for noon break in those years, and it was there that so many of us found ourselves trying to rationalize what had just happened in Dallas, Texas on that dark November day in 1963. The large tree, just north of the tennis courts, also marks the final resting place for a couple of beloved 1960s neighborhood pets.

Each time that I drive past there, I'm reminded of a warm spring Friday night in 1970 when a group of St.Ignatius seniors and their friends from Mercy, Presentation, and St. Rose got into an enormous food fight at the site of the jet, in which the only weapons were several boxes of Screaming Yellow Zonkers—a Cracker Jack-like sugar-coated popcorn snack that had brief popularity then. Even though it was all good, clean fun, one of the neighbors (a crotchety, quarrelsome old 50-something, like we all are today) called the police, who laughed hysterically when they arrived in two squad cars, red lights flashing. As they walked across the sand, their spotlights caught sight of the girl from Pres, whose long, dark Ali MacGraw-style hair was covered with the sticky snack. Face it, when the cops arrive laughing, you know that you're home free. So long ago… so far away.

Golden Gate Park—My earliest memories of Golden Gate Park go back to about 1953 or so and the live nativity scene that was on display each December in one of the meadows. Mom and Dad and I would be bundled up against the cold, and watch the actors and the animals in amazement. I once declared that I wanted to be a shepherd when I grew up, since it seemed like a lot of fun to carry a long pole and to chase after the sheep. Later, in the 1960s, came the rosary crusade at the Polo Field, concerts in the Panhandle, and museum visits to learn about the treasures of the de Young and the exhibits at the Academy of Sciences (then known as the Steinhart Aquarium and the Morrison Planetarium). 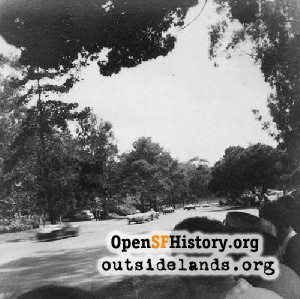 The Park was also one of Dad's favorite places to take young drivers for practice time. It seems that we drove endlessly, back and forth, from the Panhandle to the Great Highway—probably the longest stretch of San Francisco roadway uninterrupted by stop signs or traffic lights back in those days. Dad taught a dozen or more of the kids in our neighborhood to drive, and he was remarkably even-tempered with all of us. Having worked with Mom and her sister when they were learning to drive in the late 1950s, my father was capable of miracles, and many neighborhood parents were eternally grateful that he was able to help them deal with this teen-age rite of passage. To this day, when I'm on Kennedy Drive, I can still hear him saying, in between his puffs on his Kool Menthols, "OK, now just hold it nice and steady at 25 miles per hour until we get to Playland, then we can turn around and drive all the way back to Kezar the same way".

My bookcase still contains photographic evidence showing our entire 234-member St. Ignatius senior class hoisting a few beers (Olympia seems to have been the brand of choice back then) on Strawberry Hill one night in May of 1970, just prior to graduation. I guess that I should not dwell on this enjoyable outing too much, however, lest today's school rules (see Streetwise, September 2010) be invoked retroactively and cause me to lose my membership in the Alumni Association.

Sigmund Stern Grove—Everyone knows about the summer concert series that has been held at Stern Grove since the 1930s. Living nearby, though, many of us locals never attended one—at least, not until July of 1969 when our parents, like most Americans, were overjoyed with the first moon landing by American astronauts. We teenagers, however, having grown up with a steady diet of space exploration on television, didn't think that this was any big thing, and were profoundly bored by all the whoopla surrounding the "big day." As a result, the Stern Grove concert of July 20, 1969 had one of its biggest crowds ever—mostly people under the age of 25. In retrospect, it was something of a West Coast mini-precursor to Woodstock, which occurred just one month later, though we were all on our way home after just a few hours when the fog began to roll in. 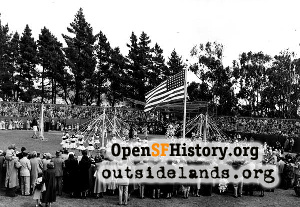 McCoppin Square—Another full two city blocks, stretching from Santiago to Taraval and from 22nd to 24th Avenues. Although the Parkside Library was a frequent destination for everyone in the neighborhood, there seemed to be an unwritten rule that the area behind the library building, its patio, was exclusively Lincoln High School territory. Judging from appearances, the area was a secluded drinking and smoking lounge for many at Lincoln. A lot of Sunset District parents did not like their kids hanging out there. A late 1960s shooting in the square solidified their resolve that, except for the library itself, the entire area surrounding the Lincoln campus was off-limits to their teenagers, unless they went to school there.

The Circle—Although the intersection of Santa Ana Way and St. Francis has the official designation of "The Circle," everyone growing up West of Twin Peaks knew that the name applied, unofficially, to the large paved area at the intersection of Sunset & Lake Merced boulevards. Our parents knew it as the place where young drivers could navigate safely and practice their parallel parking under adult supervision, with little threat of an accident. All of us, however, knew it as a place to practice various other maneuvers associated with parking. About January of 1970, my senior year at St.Ignatius, the San Francisco Police Department finally realized what was going on out there on the shores of Lake Merced, and initiated a huge crackdown one Friday night. Lots of embarrassed couples hastily buttoning things up, tires squealing to escape the onslaught of flashing red lights, and several hundred beer cans tossed into the lake made for some neighborhood excitement. The slow-footed and fumble-fingered were detained, questioned, and asked to show their driver's licenses, while those with flashy-looking cars were also asked to produce registrations. Meanwhile, a few parents received the dreaded call from SFPD to come and pick up their child. The Circle went silent for the remainder of that school year, as romantic and alcoholic pursuits were quickly and quietly relocated to the parking lot of the Palace of the Legion of Honor (see below) which was under the jurisdiction of the police at Richmond station instead of Taraval station. History records that revelers were able to party uninterrupted once again for the remainder of that school year. 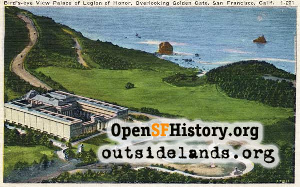 Postcard aerial view of Palace of Legion of Honor. -

Palace of the Legion of Honor parking lot—The "new" make-out and drinking spot for the Western Neighborhoods in 1970, once the police cracked down on the activities taking place at the end of Sunset Boulevard. Richmond District teens resented the influx of Sunseters, since their once-quiet and relatively private spot used for watching the submarine races was quickly becoming too crowded for comfort. Surprisingly, the SFPD never bothered anyone in this location for the remainder of that school year—did they not know or did they just think that this new spot was quieter and safer than what had recently been closed down?

West Sunset Playground—During April of my senior year at St.Ignatius on 37th Avenue, a small group of us realized that while we had supported every school event for years—football and basketball games, tennis matches, swimming and track meets, plays and muscials, band concerts, dances, and debates—we had never been to an S.I. baseball game. Off we trooped to the top row of seats at West Sunset in order to place a mental check mark on yet another high school activity, just six weeks prior to graduation. It was to be one of the last group adventures for many, for once we graduated in early June, many of us went our separate ways, and have not crossed paths again. Yet every time that I drive along near there, I still recall the shared hopes and dreams of a group of 18-year-olds who were perched high up in the stands, laughing and cheering that afternoon, while being buffeted by the strong incoming ocean breezes that were set to take us from 41st & Ortega to places far and wide.

Grandma used to smile at her memories of pre-earthquake San Francisco whenever we drove past the Conservatory of Flowers in Golden Gate Park. I'm sure that she still recalled the clop-clop of horses' hooves, the crack of the reins, and the bounce of a carriage on a pleasant day, as she thought of her own childhood experiences in the 1890s. Last Fall, I visited the new Academy of Sciences with a couple of my own childhood friends, and at one point, a family asked us to take a picture of them with their camera. As I focused on the parents and the small boy and girl holding hands, the leafy green beauty of the trees in the Music Concourse and the angular forms of the new deYoung Museum filled the background. As I snapped the shutter, I knew that this scene would one day form someone else's fond recollection of "when we were young in San Francisco," and I was pleased to be a small part of their happy memories of all the wonderful recreational spots that dot the Outside Lands.