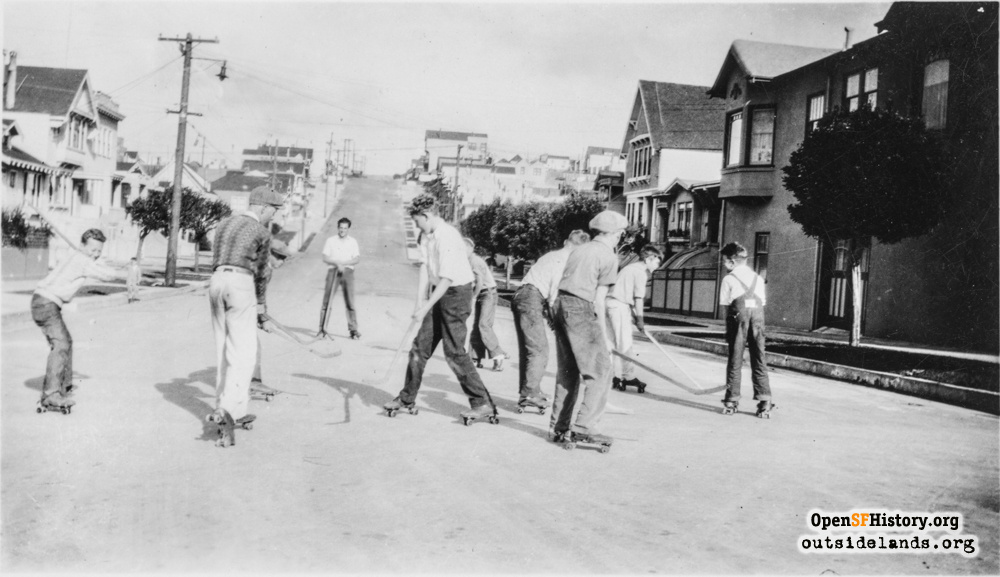 Streetwise: Playtime in the Avenues

Children's games and activities of the past in the Outside Lands

Streetwise - Playtime in the Avenues

It’s been noted a few times on the message boards how children today seem to be growing up without many of the amusements that we had back in the 1950s and 1960s—not the least of these being a weekend visit to Playland-at-the-Beach. With today’s proliferation of various hand-held electronic devices, certain aspects of childhood play seem entirely lost to the present generation of kids. Even though all of us knew how to amuse ourselves with a deck of cards and a game of solitaire, that was a rather infrequent activity, compared to what we usually did as a group.

Sadly, the activities that once took place in the streets, garages, and “rumpus rooms” of our collective youth have all but disappeared. Parked cars choke the streets and many garages now house multiple vehicles—(see Streetwise—Birth of a Garage), boxes of junk, or tiny apartments for paying tenants.

More than half a century after participating in my last neighborhood kickball game, I began to recall the fun that we all had, rain or shine, while growing up in the Outside Lands. 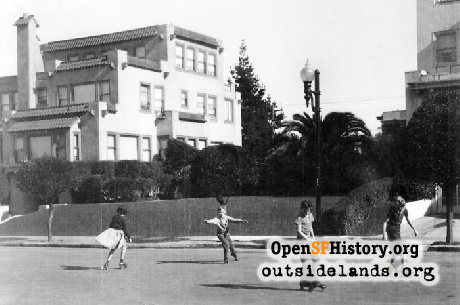 By the late 1950s/early 1960s, most Moms had driver’s licenses, so the family car was in and out regularly, even when the Dads were all at work. If the day was particularly overcast or drizzly, someone’s empty garage soon attracted a large contingent of neighborhood kids, gathered for an afternoon of fun.

Some garages were clearly better than others. In our neighborhood, The O’Callaghan family had an old upright piano—a family relic, clearly bearing some smoky and sooty scars from 1906—which had been handed down through the generations in their family, and long before relegated to the garage. Whether we had talent, or could just bang out “Chopsticks,” that piano was a perennial favorite. The same family also owned that wonder of wonders—a full-size pinball machine, complete with lights and sound! No matter how many times we played, the excitement remained fresh and new (“10,000—I’ve just gotta get up to 10,000 points!). Lusty cheers would go up from the crowd as each contestant tried his or her skills, as Mrs. O’Callaghan worked quietly upstairs, getting her family’s dinner started.

As we grew older and more ambitious, we sometimes held pet shows—bring your dog or cat and have them get to know one another—we quickly learned that some of our beloved pets were just NOT going to play nicely with some of their little animal friends. There was one particularly unfortunate incident in which it was discovered that even kittens know a rodent when they see one—and that brief get-together resulted in certain tragic consequences for one person’s hamster! 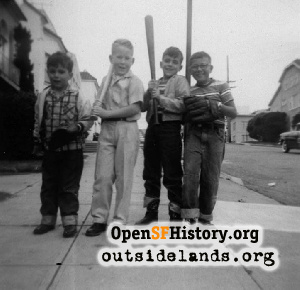 Craig Carter, Paul Judge, Glenn Carter, and Bo Links on 600 block of 43rd Avenue, early 1960s. "Do note how steep our block is. It honed our skills at ball players to prevent losing balls down beyond Balboa towards Cabrillo." -

Setting up the parents’ movie screen and lining up rows of folding chairs to show family vacation movies was an occasional activity, often accompanied by Jiffy-Pop popcorn, and Fizzies (those flavored tablets that turned into an effervescent drink when dropped into a glass of cold water). Some lucky kids had a garage that contained a spare refrigerator, loaded with those classic small bottles of Coca Cola for all the audience to enjoy.

Girls might commandeer one corner of the garage to play with jacks and dolls, while the boys were clustered around the latest Lionel train catalog, developing Christmas and Hanukkah wish lists for the latest in engines, passenger cars, freight cars, signals, or those popular Plasticville buildings that formed a complete village scene.

The old concrete double-sided laundry tub, adjacent to the washer and dryer, made a perfect body of water for sailing small boats made from half a walnut shell or folded up paper, wind-up bathtub toys, or those plastic “frogmen” filled with vinegar and baking soda. Standard parental reaction from upstairs: “Do I hear water running down there?”

Some of our Dads had well-stocked tool benches, while others had nothing more exotic than a hammer and a screwdriver. It’s amazing how long kids could remain occupied with just a few pieces of scrap wood, a hammer, and some nails.

The garage also was the place that our Moms always set up card tables so that we could work on “messy” projects such as finger painting, pumpkin carving at Halloween, gluing sequins onto Christmas ornaments, cutting out images from old Christmas cards and then using a hole punch and ribbon to make gift tags, or creating religious shrines—who among the Catholic school kids remembers the empty shoe boxes, rolls of aluminum foil, small statues of Mary, holy pictures, and artificial flowers?

While birthday parties generally took place in one of those downstairs knotty pine rooms (see Streetwise—FDR & the Knotty Pine Room), the various games would always spill over into the garage. Pin-the-Tail-on-the-Donkey was a perennial favorite, while our neighbors, the Herrerias Family, introduced us to the wonderful Mexican custom of the piñata, filled with small toys and candies.

As we grew older, there were sometimes treasure hunts, complete with maps, clues written in verse, and various directions hidden along the route from the garage, through the knotty pine room, into the backyard, out to the front of the house, and then up and down the street, before the “treasure chest”—often a kitchen-match box or metal Band-Aid container—was located, with some small item hidden inside.

We often ventured out into the backyards, realizing that different houses had different offerings. The Meaghers had a Dad-built sandbox to play in—thoughtfully covered with a plywood top so that it did not become the neighborhood’s kitty restroom. Most had a patch of lawn and a variety of sturdy plants that could withstand the onslaught of a group of kids. Flower fights, involving round, unopened fuchsia blooms thrown by opposing sides, along with pommeling one another with large full-blooming hydrangeas always made for a fun afternoon. 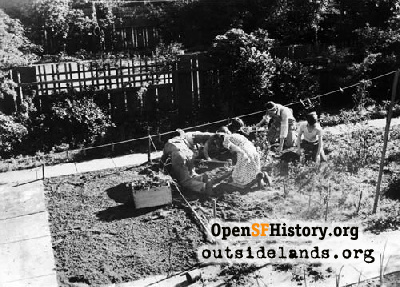 On tricycles, roller skates, bicycles, and skateboards, we would go zipping up and down the streets on fair-weather days. Hula-hoops came on the scene in about 1957-58, and for a short time in 1959-60, pogo sticks gained a brief moment of popularity. I cannot seem to recall anyone on our block with a Flexi-Flyer, and I think that all the Moms somehow conspired among themselves to boycott this item, thinking it was “unsafe.” Duncan yo-yos and the various tricks that could be performed with them had their own heyday in 1961-62, and skateboards appeared about 1964.

Someone always had one of those blue plastic Doughboy wading pools—hauled out from its storage spot on the wall of the garage—every September/October when the weather warmed up. There was nothing more fun for a bunch of preschoolers than to be splashing around noisily on the back lawn on warm Indian summer afternoon, with visiting neighborhood dogs barking and romping happily, as the cats were all hiding out under the shrubs, unwilling to be lured into the fun.

At some point, even the ever-present center patio became a playground as we all became farmers. Following the lead of Mrs. Beckerman and Mrs. Ehrmann at Parkside School, we placed carrot tops in saucers of water and waited for them to sprout. Likewise, apple and watermelon seeds were carefully nurtured in flower pots, and although I don’t ever recall a watermelon crop coming in, for years, Mom’s backyard contained a producing apple tree that I had started from a seed during Christmas vacation in 1962. Likewise, the lone avocado seed, skewered with toothpicks and its bottom resting gently atop a glass of water was a standard in every home. When a friend of mine sold her parents’ house on 27th Avenue after her father’s death in 1989, the final thing I saw as we left the place for the last time, was the gnarled old avocado tree that she had planted during her days at Lawton School.

Coin collecting was also a popular hobby in the 1962-63. Friday afternoons—the only time that banks were open later than 3 p.m.—a group of us would march up and down West Portal with a roll or two of pennies, getting into line and exchanging them at one bank after another, then sitting outside and sorting through each new roll to see if there were any particular dates that would help to fill the blanks in one of those blue Whitman albums that had been purchased for 50 cents at Toy Village. Somewhere, I think I still have one complete album of collected pennies with dates from 1941 through about 1964.

The seasons of the year also helped define our playtime activities. Whiffle ball (you remember—white plastic ball and yellow plastic bat) on the street in front of our houses marked the beginning of Spring, and impromptu games of hide-and-go-seek returned once again. In a neighborhood of tunnel entrances, recessed garage doors, and tall shrubs, the variation in hiding places was almost endless. 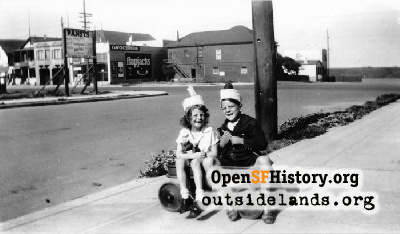 In summertime there was the usual array of fireworks for 4th of July always purchased just over the city limit in Westlake—even though that holiday invariably turned out to be foggy and wet in the Sunset. In spite of the presence of illegal firecrackers, I cannot recall anyone every losing any important appendages, and the only mishap we had was when someone dropped a lighted firecracker into the sewer in front of Mr. Whittlesey’s house, and set off a small blaze which drew the attention of the San Francisco Fire Department.

In the Fall, Mrs. Tobin, a long-time St. Cecilia’s teacher and 17th Avenue neighbor, taught us to collect caterpillars, often found on milkweed plants. They would soon curl up into a cocoon, remaining dormant all through the winter in a small dish on a garage shelf, before emerging in spring as a monarch butterfly.

As the winter rains began, we might retreat upstairs to someone’s living room for marathon Monopoly games, and my personal set—pieces now contained in an old White House gift box—has been with me since age 8 or 9, and has seen hundreds of spirited games. Jigsaw puzzles were another wintertime staple—always assemble the border first, then work up from the bottom to the top—which was often a large expanse of clouds and blue sky that might take days to complete. Mr. Kays taught us to play poker and Mrs. Greenblat explained the intricacies of Mah Jongg, thus keeping us warm and dry until spring. About 1963-64, as pre-teens, we all enjoyed the then-new games of Life, Mousetrap, and Twister in one family’s living room or another.

About 1965 or so, we began going our separate ways as sophisticated, worldly high school freshmen at Mercy, St. Rose, Star of the Sea, St. Ignatius, Lincoln, or Lowell, and more than a decade of playtimes drew to a close for all of us. Now that retirement is fast approaching, some of us boomer-geezers who belong to WNP have started a periodic lunch bunch meet-up, where we muse over our old pastimes, and I’m guessing that it won’t be too long before we have Monopoly marathon scheduled.

When that time comes, I’ll be ready to buy my favorite Illinois Avenue as quickly as possible after I pass GO the first time.