Various west side transit and road improvement projects from the 1930s to the 1970s.

To the Outside Lands, that is…

In a lifetime of meanderings around San Francisco, it has sometimes occurred to me that not all the local streets are exactly as they once were. In some parts of the City—Telegraph Hill, North Beach, and the Mission come to mind—there are still many streets in their original configurations, often unchanged in layout from 100 years ago.

It's amazing, though, how so many of the streets either in or leading to the Western Neighborhoods have changed over time. Originally, when the western part of the City was mostly sand dunes, there weren't all that many ways in, around, and out of the area, but all that began to change in the 1930s.

Unlike recent Boards of Supervisors that have busied themselves with "non-binding resolutions" involving issues and countries well beyond their collective jurisdiction, state and local government agencies used to concentrate on issues closer to home and far more related to improvements in the local infrastructure.

Nineteenth Avenue—When the Golden Gate Bridge opened in May of 1937, the only route into San Francisco was via Doyle Drive, named for Frank P. Doyle, the long-time President of the Santa Rosa Chamber of Commerce who successfully fought for construction of the Redwood Highway in Marin and Sonoma counties, as well as for the building of the bridge itself. Initially, however, there was no direct link from the bridge to the Richmond, Sunset, and other points south. It wasn't long before residents on San Francisco's west side were clamoring for easier access.

Early in the 1940s, 19th Avenue was widened to accommodate the growing number of vehicles headed toward the bridge from the Richmond, Sunset, and San Mateo County. Note that the bridge had been open for more than three full years before this matter was finally resolved, thereby proving that in that group of eleven older Irish men who made up the Board of Supervisors in those days, there were likely at least twenty-two differing opinions of what needed to be done. For some before/after images, go to: http://www.outsidelands.org/streetwise-19th-Ave.php

Park Presidio Boulevard—From its days as a post-earthquake refugee camp in 1906, Park Presidio evolved into a quiet north-south street, as seen here after the camp had been closed.

By 1939, a center divide had been added, but there was still no direct connection to the bridge. The Call-Bulletin reported on February 11, 1940, that "the $1,300,000 Park-Presidio approach to the bridge" (including a tunnel under the Presidio's golf course) was about to open. Then, by June of 1941, the roadway had markings delineating two lanes of traffic in each direction, with lights added to the center island. Finally, a post-World War II widening reduced the width of the planted area adjacent to the roadway, thereby adding a third lane in each direction.

Sunset Boulevard—Originally a public works project begun at the height of the Great Depression, the Boulevard cuts a wide swath through the Outer Sunset, providing easier north-south access than driving along 19th Avenue or any of the other numbered avenues. Though there have been proposals made over the years for the addition of a streetcar line, local residents have repeatedly resisted such a change.

Market Street—While city officials wrangled over various freeway proposals (see http://www.outsidelands.org/streetwise-freeways.php, there was also an effort made to improve the driving situation between downtown and the entire West of Twin Peaks area. The extension of Market Street was a major component of this plan and was played out from 1956-1958. Beginning with the area just west of Castro and Market streets, work progressed west to the link with Portola Drive: 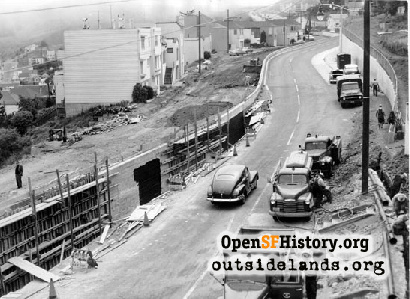 The straightaway portion of Market that forms the final link to Portola was added at the same time to eliminate another twisting S-curve.

Portola Drive—While the widening of Market Street improved traffic movement somewhat, the entire length of Portola Drive had to be widened to deliver all that new traffic to St. Francis Circle and beyond. Here are two before and after images from the corner of Portola and Miraloma. 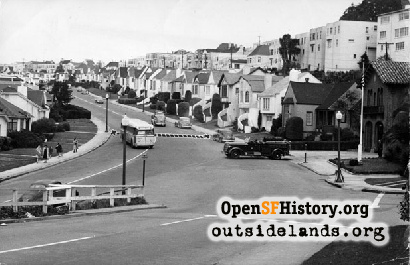 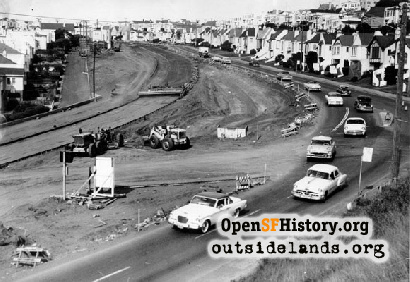 "Widening Portola, a job that will be completed next January, is coming along, as this picture taken from Miraloma dr. shows. The long scar in the center of the picture once contained houses, which were moved out to permit the street widening.", n.d. - Eddie Murphy/SF News-Call

Clipper Street—San Francisco planners also realized that many of the people who moved West of Twin Peaks in the years after World War II still had strong family ties to the Mission District. In 1947, Clipper Street was extended from Douglass Street up and over the top of Twin Peaks to connect the Mission with the Outside Lands.

Geary—This has always been the primary east-west route between downtown San Francisco and the ocean. Here is an 1865 view near Geary and Masonic, with the cemeteries forming a backdrop. Seventy-five years later, the adjacent land was largely vacant after all of the cemeteries were removed by City order.

Then, shortly after the end of World War II, Geary was widened in this area, with the big Sears store and Kaiser Hospital being built in the early 1950s. By the late 1950s, when it was clear that the City's Freeway Plan was deader than the proverbial doornail, civic leaders combined desired transportation improvements with some then-popular urban renewal schemes, and the Geary Expressway was born. The plan began with the removal of the streetcar line from Market Street all the way to the Beach in 1956, and installation of the replacement 38-Geary bus line. Construction then commenced to widen Geary considerably from Gough to the already-widened area near Masonic, with a traffic underpass at Fillmore, plus construction of the Japan Center and various housing projects along the way. Finally, in 1974, the last traffic bottleneck was removed with the opening of the tunnel under Masonic Avenue, thus speeding up access to and from the Richmond.

Masonic Avenue—This street, too, was significantly impacted by the removal of the cemeteries. Originally commencing at Geary, Masonic was later cut through at a northeasterly angle, so that the point of origin is now Presidio Avenue. This extension enabled City engineers to link Masonic to the Pine-Bush corridor, which were then fully converted to one-way traffic. Prior to this, Pine and Bush were one-way streets only in the downtown area, and they both ended at Presidio Avenue, which was the eastern boundary of the Laurel Hill Cemetery. As traffic picked up throughout the 1950s, Masonic was further widened near Geary, removing a large meat market on the corner next to the old Bekins storage facility across from the MUNI maintenance facility and kitty-corner from the old Sears store.

Fell and Oak Streets—Again as part of the overall traffic plan, Fell and Oak were converted into one-way streets in the early 1950s, punching through Golden Gate Park in order to speed up traffic between the western neighborhoods and downtown. Traffic from Fell used to dead-end at Stanyan, but then, a new entrance was opened into the Park, allowing westbound traffic onto the Main (now JFK) Drive past McLaren Lodge, and with the ability to turn left and reach Lincoln Way.

El Camino del Mar—A winding street with a fabulous view of the Marin Headlands, El Camino del Mar once meandered through the Sea Cliff neighborhood, then past the Palace of the Legion of Honor, before emerging onto Point Lobos Avenue above the Cliff House—and what a ride that must have been for all the out-of-town tourists! A 1950 newspaper article stated that the road "has been closed for seven of its thirty-three years of existence" and that the Public Works Department determined that a bridge was needed, with foundations going down to bedrock to avoid further slides. Despite on-going efforts to make repairs over the next few years, City engineers deemed the roadway too unstable, and that final link from the museum out to Sutro Heights was closed to traffic once and for all in 1957.

BART/MUNI Subway—Even BART was originally envisioned as a transportation boon for the western neighborhoods, though these plans never came into being. In this 1961 diagram, a BART line was still planned to extend to 25th Avenue & Geary in the Richmond after Marin County dropped out of the program: 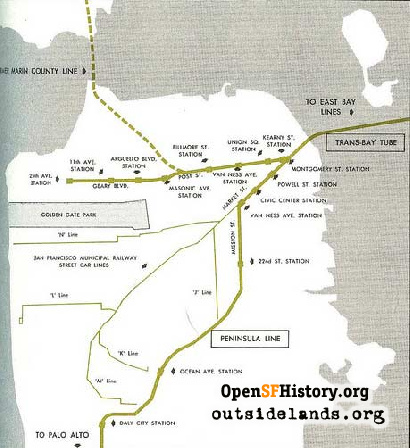 Proposed routing of BART in San Francisco to the Richmond District after Marin County pulled out of plan, 1961., Sep 1961 -

Sadly, the plan was not economically feasible without the line to Marin, but this old sketch still evokes hope among daily riders of the jam-packed 38-Geary bus line: 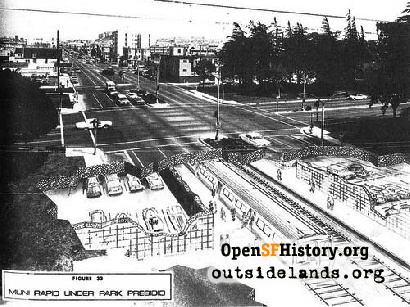 MUNI's Market Street subway was to have continued all the way to St. Francis Circle for the K and M lines, but West Portal merchants managed to kill that idea. Local author Richard Brandi covered this topic thoroughly in his history of West Portal.

Ultimate Transportation Fantasy—Ponder this vastly expanded BART pipedream, including a north-south green line running from the Richmond, with stops in Golden Gate Park and throughout the Sunset, and then extending all the way to Parkmerced and San Francisco State University, before extending as far south as Millbrae:
http://www.flickr.com/photos/tjprz/5271846455/

Whenever I think that traffic in the Outside Lands is difficult today, I remind myself of just how bad it was in earlier times before the implementation of all the above improvements that we now take for granted.