Shopping was once a pleasant activity that we undertook with local merchants who lived among us before Starbucks, Walgreens, Olive Garden, Safeway, Subway, Supercuts and others infiltrated the neighborhoods. Walking down an Outside Lands street in the 1950s or 1960s, you might find yourself doing business with:

John and Victoria Dekker, who lived on 39th Avenue near Irving Street, took over a former Goodwill Store at the northeast corner of 20th Avenue and Irving Street circa 1961. Completing most renovations themselves—hard to imagine today!—they opened Dekker’s. The store was stocked with popular merchandise, including the “must-have” athletic shoe of the day—Converse Keds. The choices were simple: either high-top or low-top, black or white, and the entire back wall was stacked high with boxes.

Dekker’s became a neighborhood institution, for its shoe selection and service, and also for the variety of other sporting goods they carried. The second floor contained a “swing room” with hundreds of bats of all weights and sizes. Customers could practice swinging until they found the perfect bat—see if you can find that at any big-box retailer today!

For years, the store’s main competition was Flying Goose at 24th Avenue and Taraval Street and Dave Sullivan’s at 17th Avenue and Geary Boulevard. By the end of the decade large franchise stores, including some in Daly City, were selling athletic shoes at deep discounts, and, circa 1967, began something previously unheard of: opening on Sundays. Eventually the Dekkers sold the business. The corner then housed Sunset Sporting Goods for a few years before evolving into yet another bank.

Here are memories of some other businesses where customers interacted with owners who were also neighbors. Like Dekker’s, all these places featured reliable products/services, good values, and friendly, personal attention—and that’s why we remember them, even today.

The Alteration Shop, 1145 Vicente Street—operated by elderly Miss McKinley who lived in the same building, offering same-day service if needed. Mom, who was barely 5’4", relied on her for years to alter the hemline of every dress and skirt she wore. 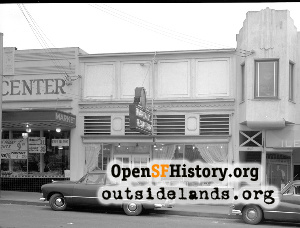 Baronial Bakery, 1033 Taraval Street—operated by Willie and Wilma Nabbefeld who lived at 24th Avenue and Vicente Street. They provided birthday cakes for our family from the 1950s until the 1970s. Their chocolate layer cake with the glossy dark frosting was spectacular.

Carew and English, 350 Masonic Avenue—operated at the easternmost edge of the Outside Lands for decades by the Carew Family, whose members lived in Jordan Park and Forest Hill. Most of our 18th Avenue neighbors did business here, as the need arose, until the firm disappeared in a merger.

Courting’s Stationers, both West Portal Avenue and Stonestown—operated by Anna Courting who lived on Magellan Avenue. Courting’s sold everything from greeting cards to office supplies in two convenient locations.

Dave’s A-1 Pharmacy, 1755 Noriega Street—operated by Dave and Mary Shayman who lived at 14th Avenue and Lawton Street. Dave’s was larger than some drug stores of the era, carrying more items. Their daughters worked there on weekends.

El Sombrero, 23rd Avenue and Geary Boulevard—operated by Bill and Alicia Bernal who lived nearby on Clement Street. A Friday or Saturday evening of Mexican food at this wonderful spot prompted people to dress up a bit. Parking was very easy back then.

Emerald Cleaners/Tailoring, 1730 Noriega Street near 24th Avenue—operated by Harold and Helen Bloom, a charming old-world couple who lived at 40th Avenue and Ulloa Street. I was having some suits altered in 1982 after losing 50 pounds on Weight Watchers, when Helen, multiple threaded needles in her lapels, whispered—“Dahling, are you eating OK? Let me bring you some of my nice chicken soup…”

Ernie’s Neptune Fish Grotto, 19th Avenue and Irving Street—operated by Ernest and Ruth Aviani, who lived at 22nd Avenue and Judah Street. My parents were Friday night regulars in the 1950s, and I developed a life-long passion for Bay shrimp here.

Florence Delicatessen, 2115 Irving Street—operated by Lois Ross, who lived around the corner on 22nd Avenue. This was a replica of Herman’s on Geary. I can still smell the sliced meats, cheeses, pickles, and olives, and the incomparable cooked ravioli in sauce.

Frank’s Floral Shop, 19th Avenue and Irving Street—operated for over fifty years by Frank and Gladys Korkmazian who lived at 14th Avenue and Lincoln Way. Every high school guy in the late 1960s knew that Frank’s had the best $5 orchid corsages for prom dates. Still there under new ownership. 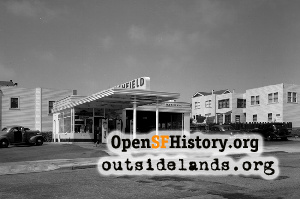 Gene’s Richfield, 23rd Avenue and Vicente Street—operated by Gene Winkelbauer who lived on 21st Avenue near Vicente Street. This was Dad’s favorite place to buy gas and yack with the owner and his employees.

Golden Brown Bakery, 21st Avenue and Irving Street—operated by Wendel Kretz who lived on Head Street in Ocean View. I can still smell their coffee cakes coming out of the oven, with that seductive brown sugar/almond paste aroma.

K&E Five & Ten, 2226 Taraval Street—operated by Mr. Karp who lived in Lakeshore. This store had everything, from penny candy to Matchbox cars (remember those?) to Halloween costumes to Christmas lights to binder paper and gym sox.

Kieser’s, Irving Street near 19th Avenue—operated by Ellen Kieser, second-generation owner, who lived in St. Francis Wood. The diner was known for homemade ice cream and a jar of fresh strawberry jam on each table at breakfast.

Little Dutch Laundromat, 39th Avenue and Taraval Street—operated by Howard and Bessie Plank, my 18th Avenue neighbors. It was a self-service, coin-operated laundry, but both owners spent hours there daily, providing customer service.

Overland Pharmacy, 21st Avenue and Taraval Street—operated by Theresa Corsiglia, who lived on Magellan Avenue. Her late husband, Charles, started the business, and she kept this neighborhood fixture going for decades.

Parkside Barbershop, 951 Taraval Street—operated by William Zoerb who lived at 44th Avenue and Taraval Street. I had my first haircut there, staring into the mirrored wall in front of me that reflected the mirrored wall behind me—infinity. Bill handed out Tootsie Rolls and sometimes let young customers help wind up the revolving barber pole.

Ping’s Hand Laundry, 1111 Taraval Street—operated by Yow Fong Yee who lived on 33rd Avenue in the Richmond. In the 1970s-80s, I was a third-generation customer, bringing my dress shirts to this third generation business. 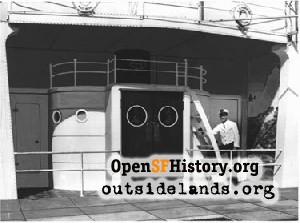 Road to Mandalay, 314 West Portal Avenue—operated by Jim Raven who lived near Mount Davidson. From 1940-1961, this bar resembled a classic ocean liner beached on West Portal.

Savano Luggage, 320 West Portal Avenue—operated by Sam and Carmela Savano who lived nearby on Vicente Street. See this page for more.

Sea Bee Liquors, 40th Avenue and Taraval Street—operated by Henry and Bernice Gerland, my 22nd Avenue and Pacheco Street neighbors. Under the Gerlands’ watchful eyes, it was one of the few Taraval liquor stores that NEVER sold to anyone underage—the Gerlands had teens of their own. Still there after many new owners.

Siskin’s Thrift Drugs, 9 West Portal Avenue—owned by William Siskin who lived in Lakeshore. Adjacent to the Twin Peaks Tunnel, it was the ultimate in convenience.

Sugar Bowl Bakery, 3640 Balboa Street—owned by Mr. and Mrs. Harter who lived on Shore View Avenue. Adjacent to the Balboa Theater, the name and logo live on via a company that distributes packages of incredible brownie bites.

Sullivan’s Real Estate/Insurance, 31 West Portal Avenue—owned by Supervisor James Sullivan who lived on 17th Avenue near Ulloa Street, managed by his assistant, Theresa Hession, who lived at 18th Avenue and Santiago Street. Sullivan’s Cairn terrier, Tippy, had the run of the office. After Sullivan’s death in 1961, Theresa inherited the insurance business and ran it from her home office for 25+ years.

Tennessee Grill, 22nd Avenue and Taraval Street—owned by Bill Whatley who lived near Alemany Boulevard. This was our family’s breakfast spot when leaving on vacation. The hash browns are still sizzling under new owners. See more in Streetwise—Rise & Shine.

Vicente Beauty Salon, 1127 Vicente Street—operated by Emily Nelisse who lived upstairs with her children at 1125 Vicente. Mom was a regular in the 1950s, and again from 1970 until 2002 under new owner Kisae Woo. With the passing of so many ladies of Mom’s generation, Kay retired, closing the business. See more in Streetwise—The Generational Wave Goodbye. 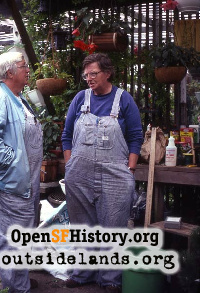 Vicente Begonia Gardens, 1100 Vicente Street—operated by Ray and Madeline Anderson who lived at 34th Avenue and Ulloa Street. The tiny store, angled at the northwest corner of 23rd Avenue and Vicente Street, dispensed plants, tools, supplies, and advice for decades. Long ago replaced with apartments.

West Portal Joe’s, 1 West Portal Avenue—operated by Jorge Vargas who lived at 27th Avenue and Lincoln Way. “Eat here and save a trip to North Beach.”—a wonderfully fragrant restaurant in an excellent location with plenty of easy parking.

West Portal Pet Shop, 44 West Portal Avenue—operated by Mrs. Anna Potter who lived on Forest Side Avenue. The green parrot was on a perch at the entrance, and puppies were scampering around on shredded newspaper in the window—to every child’s delight.

White Lumber Company, 1500 Noriega Street—operated by Charles White who lived at 22nd Avenue and Lawton Street. Convenient one-stop hardware/lumber shopping for do-it-yourselfers. I was a regular when I bought my first house on 22nd Avenue in 1979.

Wirth Brothers Pastry Shop, 5901 Geary Boulevard at 23rd Avenue—operated in the 1950s by Anthony and Elizabeth Wirth who lived at 26th Avenue and Kirkham Street. They had great coffee cakes and Danish pastries. Reopened briefly by new owners, 2001-2002.