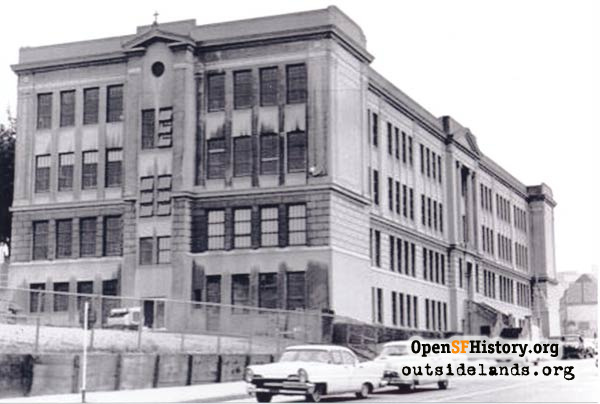 It was the start of San Francisco’s annual Indian Summer in 1966.

Wearing a button-down shirt, sweater, khaki pants, and loafers, I was standing on the southeast corner of 19th Avenue and Vicente Street, MUNI car ticket in hand, waiting to see the #28 bus turn the corner at Sloat Boulevard, two blocks away. It was the start of high school at the old St. Ignatius—“a fog-stained, weather-beaten bomb shelter”—and I was a brand-new freshman.

Orientation was over—with all of us looking particularly bug-eyed in our yearbook pictures taken a week earlier. High school was just beginning for thousands of 14-year-olds across San Francisco, and I had no idea what lay ahead for the next several hours. It would be an adventure, no doubt, and for most of us, it all began with a MUNI ride. 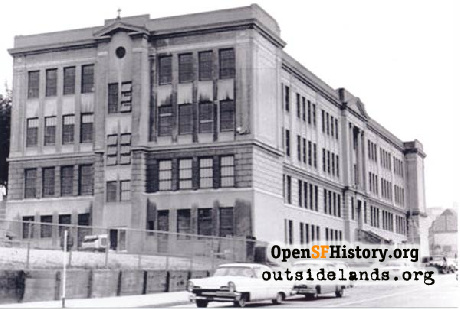 Sitting with fresh notebooks, binder paper, a handful of new Bic pens (stored in my plastic pocket protector), slide rule, and an English syllabus that outlined the entire year’s course of study, I envisioned a busy time ahead—knowing that many textbooks, including World History, Algebra, Latin, English and others, were already stacked up and waiting in my locker (#73 on the first floor of the old building). I repeated the padlock combination (29-38-20) silently while on the bus ride, just to be sure that I had memorized it correctly.

Transferring to the #5-McAllister at Fulton was easy, since the morning MUNI schedule provided plenty of buses to get office workers to their Financial District jobs on time. Just like the #28, the #5 usually had seats available, and I seldom had to stand on the way to school, thus leaving time for last-minute study.

As I got off the #5-McAllister at Stanyan about 7:30 a.m., and walked two short downhill blocks, I saw a few classmates that I recognized from the prior week’s Orientation—plus many older students, aged 16 or 17, walking up from the #31 Balboa or being dropped off 222 Stanyan Street by their fathers who were headed to work themselves.

Urged by my parents and older friends to be “outgoing” as a freshman, I introduced myself to others, while struggling to remember their names, neighborhoods, and prior schools. Although one-half of the boys from my 8th grade class at St. Cecilia’s were also my classmates here at SI (about 25 or so), with a freshman class totaling nearly 250, there did not seem to be too many familiar faces in the crowd during those first few days.

My first class was World History, taught by curmudgeonly Father Pallas—who turned out to be Dad’s 1932 classmate from SI. That night over dinner, the conversation clearly indicated that my father still thought of his old buddy as a 16-year-old and not as a priest in his 50s: “Don’t let him offer you any cigarettes—he’s the one who got me started smoking”. Reality check: “Uh, Dad, priests don’t offer students cigarettes—they confiscate them and give you detention”. Father Pallas was the very last Jesuit at SI who insisted that the school leave his beloved “lecture dais”—a raised platform 10 inches off the ground—in his classroom. He read aloud standing on that platform, his desk was up there, and he exuded his pedagogical presence from that perch. The dais, once a standard part of Jesuit education, had long been abandoned by every other teacher in the school—but Father Pallas was not about to succumb to any modern trends, so we were the last generation to experience traditional Jesuit education in his class. He pontificated over a group of baffled 14-year-olds in true old-world style, and was not above physically throwing out any would-be class clowns. He would also toss off the occasional joke with a Latin punchline, just to see if we were keeping up with our studies—Latin was then still a requirement for freshmen and sophomores.

After that, it was Father Jacobs for Algebra—yet another of Dad’s classmates, thus convincing me that I would never be able to get away with anything! European-born and highly methodical, he used a chalk pen and insisted that all homework be done on plain white paper set atop a “delta form”—a background of small dark squares designed to keep penmanship and mathematical calculations in straight lines. He could draw quadratic equations on the blackboard at lightning speed, and then pivot around and ask, “So, gentlemen—what now?” as we all stared back at him with varying degrees of bafflement.

Next was Public Speaking 3 days a week, where we debated everything from pro/con on the death penalty, dividing California into two states, and memorizing/reciting classic routines like “Who’s on First?” We went from a pretty shy bunch of young boys in September of that year to a classroom full of would-be performers, lawyers, politicians, and business people by June—always having an appropriate and snappy comeback for any given situation. PE occupied the other two weekdays, where jocks and bookworms alike all hated running laps around the track in every possible weather condition.

After a morning spent learning the three phases of Peloponnesian War, the commutative, associative, distributive, and transitive properties of equality, the logical fallacy of circular argument, plus a chilly shower after a 3-lap run, we were all a bit dizzy and ready for lunch.

SI was a closed campus then, except for seniors. The rest of us ate in the cafeteria—recently renovated to remove every trace of hot, nourishing food, and filled with vending machines that provided all the sugar, salt, fat, and caffeine required to get through the rest of the day. Facing west, the space heated up quickly from the mid-day sun, so most students soon moved into the cool, dark basement corridor, lined with old graffiti-covered benches dating back to the school’s 1929 construction. Just as in later life, friendships were often made over bagged lunches—with a few homework answers tossed in for good measure. Although there were clear social castes among the 1,000 students—as the school secretary in Ferris Bueller’s Day Off noted: “the sportos, motorheads, geeks, sluts, bloods, wastoids, dweebies, dickheads”—we were all on equal footing at lunch. Friendships were formed over tuna-fish sandwiches that might never have been possible in extra-curricular activities like team sports, yearbook, band, or drama where everyone shared similar interests.

Bells still regulated our movements, and before long, the 5-minute warning sounded, producing a rush to lockers, exchanging books, and climbing or descending a couple of flights of cramped staircases, before settling into an assigned seat before the classroom door slammed thunderously shut.

English was next, with required summertime/school year reading lists, daily writing assignments (100-word essays), plus endless discussion of short stories and Shakespearean plays. The Merchant of Venice was always a 1st-year assignment—“Signor Antonio, many a time and oft in the Rialto you have rated me…” There was also memorizing and reciting poetry. “There are strange things done in the midnight sun by the men who moil for gold, the arctic trails have their secret tales that would make your blood run cold...”—the opening lines of Robert W. Service’s The Cremation of Sam McGee—something every SI boy from that era can still recite at the drop of hat. “Building Word Power” was a paperback text with thousands of entries (each having a specific number), to be learned and incorporated into daily writing assignments, with the identifying number clearly annotated. Today, the phrase “BWP Word #193!” remains an impromptu remark that many of us make during conversations with other alums in which one person incorporates a particularly impressive word. Our class was fortunate to have had a relatively young Jesuit, six years out of SI himself (and 1960 student body president), as our teacher. He proved to be an excellent listener who taught a bunch of young kids far more than just the basics of the syllabus. It is no surprise to anyone that he eventually became a child/adolescent psychologist.

Next was Religion with Father Keating, whom we thought to be incredibly old (he was 38 then). In addition to the standard overview of Judeo-Christian history, the school had recently added a mild Sex Education component to this course. That topic was covered in a small booklet titled “The Right Answers to a Teen-age Boy’s Questions”—or as it was popularly known, “Vague Answers to the Wrong Questions”.

The day wrapped up with Latin—again with a younger Jesuit instructor—who was able to make a dead subject bearable by having us analyze and discuss the culture of the Roman Empire—while still making us practice verb tenses and noun/pronoun/adjective declensions. He was one of the few teachers with whom I corresponded through later high school and college years, as he moved on to complete his own studies. Again, not surprisingly, his career led him to the field of psychology.

The end of the day had finally arrived, with one thousand teenage boys being dispersed into the Inner Richmond neighborhood and jamming onto the #31-Balboa or #5-McAllister buses. By the end of that first week, there were a few recognizable faces on the ride home, and a nod or two of acknowledgement or discussion of homework assignments among those of us who had become acquainted during Orientation and those first days of class.

Throughout the years, our shared experiences—even if we had not been particularly close friends at school—have always made for easy conversations. “What have you been up to?” has always been the standard opener, while responses have run the gamut of college/career/marital/family. Today, the talk often includes a new component—just how close we each are to retirement. All these subjects are usually dealt with quickly before one of us veers off onto something specific:

• “What about those last two minutes in the Turkey Day game against Lowell at Kezar in 1966?”

• “Then her Mom showed up in slippers and bathrobe, banging on the steamed-up car window at the Circle down by the end of Sunset Boulevard”.

• “Thanks for sharing your Physics homework with me during senior year, or Father Spohn would never have let me graduate”.

• “The two girls got into a hair-pulling fight one Friday night at Pirro’s on Irving Street when they realized they were dating the same guy—then they both attacked him”.

• “Brother Draper caught us red-hand with smokes and Olympia six-packs at Strawberry Hill and my parents grounded me for a whole month”.

• “The cops busted him for doing 90 on Great Highway, but we all chipped in enough to bail him out and pay the fine”.

• “It took a week to air out the chem lab after he accidentally created butyric acid and got an F in the class”.

• “How many raffle tickets and “World’s Finest Chocolate” bars did you sell?”

• “We always hung out after school on Meatball Day at Herb’s Deli on Taraval”.

• “Were you there when someone brought that nasty, barking German Shepherd dressed in his sister’s St. Rose uniform to a pre-game rally?”

• “Yeah, he was always the class clown—like that time he arrived at school on a Pogo stick”.

• “Bruce Bary in Stonestown always had a big weekend crowd”.

Sadly, some new comments have begun to surface:
• “His recreational drugs are now Coumadin and Lipitor.”

• “He’s OK after the hip replacement.”

• “That cute girl from Mercy that you liked—she’s now called ‘Nana’ by her nine grandchildren."

• “I went to his funeral two weeks ago…”

As we approach our final dozen or so laps in the race of life, we look back and are grateful to have shared memories—with many long-gone events still warming and sustaining us today. Our 1970 yearbook said it best, quoting Simon & Garfunkel: