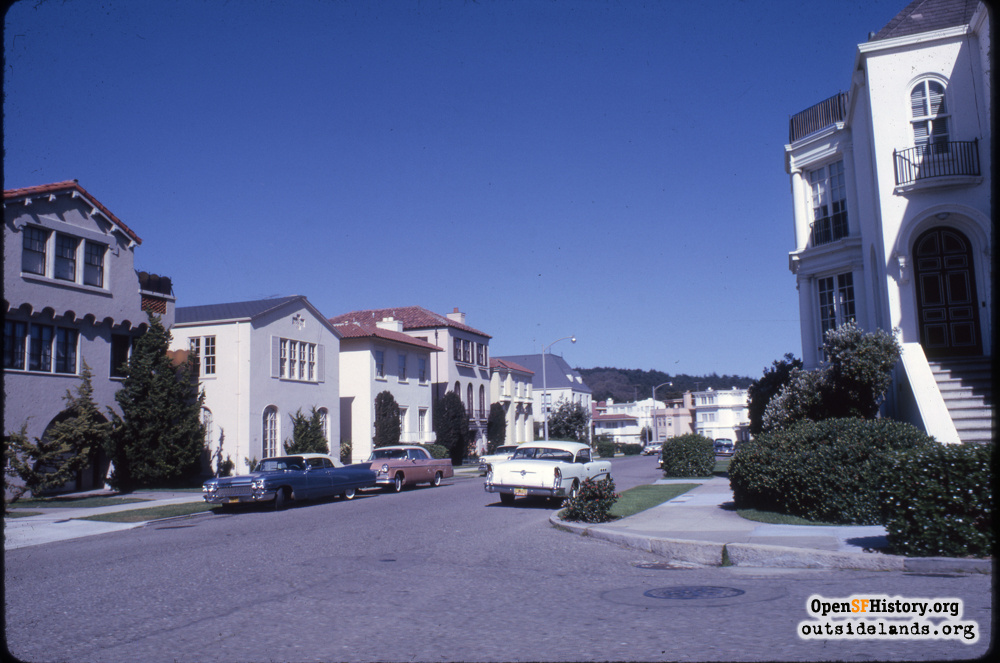 Streetwise - Streets of the Outside Lands

A quiz on the lesser known byways of western San Francisco.

Streetwise - Streets of the Outside Lands

So, you think you know the streets in the Western Neighborhoods pretty well, huh? Do you really think that all Richmond and Sunset District streets are in alphabetical and numerical order? Today, we have a Streets of the Outside Lands Quiz. See if you can identify the location of the following streets by naming the nearest major intersection, or even the general area.

The territory covered here is from the Golden Gate Bridge south to Sloat Boulevard and from Arguello Boulevard to Ocean Beach. Most of these locations are duly marked with street signs, but I’ve indicated a couple that are not, though these are clearly noted on Google Earth maps. Most are fully paved, with a couple of exceptions noted in the answers.

Just to make things easier for all of us, I’ve excluded all those tiny roads that lace the Presidio and Golden Gate Park, along with all of the meandering streets in the West Portal, St. Francis Wood, Mount Davidson, Twin Peaks, and Forest Hill neighborhoods. Likewise, I’ve excluded a couple of unnamed easements (one near 35th Avenue and Sloat Boulevard, plus a couple of more in the Richmond District), as well as a driveway adjacent to the 37th Avenue campus of St. Ignatius that has a street sign reading simply "Go Cats!"

Good luck in identifying the following 51 locations, some of which are NOT where you think they are (re-read the above paragraph for the boundaries):

Aerial Way—Small street in Golden Gate Heights that runs east-west from 14th Avenue to Ortega Street, but is open to vehicle traffic only one block from Funston Avenue to Pacheco Street.

Aloha Avenue—Curving street in Golden Gate Heights that runs from Funston Avenue, between Lawton and Moraga streets, to Lomita Avenue.

Anglo Alley—Runs north-south for about 1½ blocks, from Ortega Street to just south of Pacheco Street, between 17th and 18th Avenues.

Alta Mar Way—Just as the name implies, “high above the sea,” this tiny north-south street of tidy 1940s homes begins at Seal Rock Drive and ends at Point Lobos Avenue between 46th and 47th avenues.

Cecilia Avenue—Runs for nearly two full blocks, north-south from Rivera Street to a spot just north of Taraval Street, between 15th and 16th avenues. Named in honor of St. Cecilia’s Parish, whose original church was erected nearby in 1917.

Cornwall Street—Runs east-west from Arguello Boulevard to Seventh Avenue, off California Street. The area near Sixth Avenue was once known as Carzonia where old cable cars had been converted to homes—not to be confused with Carville farther out near the beach. 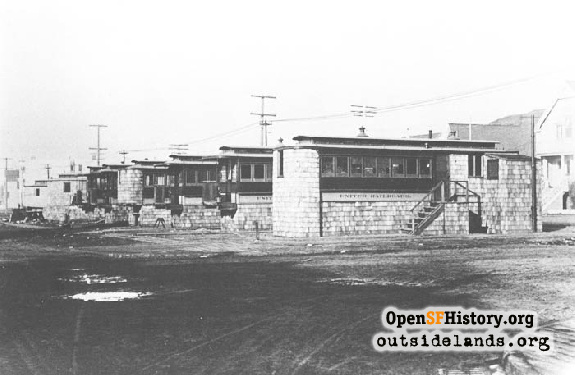 Cragmont Avenue—L-shaped street in Golden Gate Heights, from Quintara Street to 12th Avenue, in the spot that would ordinarily have been occupied by 11th Avenue.

Fanning Way—Small street in Golden Gate Heights that runs from the corner of 15th Avenue and Quintara Street to 14th Avenue, between Pacheco and Quintara streets.

Judah Alley—Partially paved dirt alley that runs north-south from Judah to Kirkham streets, between 23rd and 24th avenues. No signs posted, but each end of the alley is marked by concrete pillars about four feet in height. Google Earth also refers to this location as “Dirt Alley” and “23rd ½ Avenue”.

Koret Way—A long, dog-legged, fully-paved cul-de-sac extending from Fourth Avenue and Kirkham Street through the area behind some of the buildings of UC Medical Center.

La Playa —Runs north-south from Lincoln Way to a point just south of Kirkham where it merges into the lower portion of Great Highway. Spanish for “the beach,” it was a colorful substitute for the “49th Avenue” shown on some early maps.

Lomita Avenue—Curving street in Golden Gate Heights that runs from about 16th Avenue and Moraga Street to 15th Avenue and Lawton Street.

Marvel Court—Tiny east-west cul-de-sac of 1950s homes, just off the 300 block of 32nd Avenue, between California and Clement. The street dead-ends into a retaining wall at the grounds of the Palace of the Legion of Honor. 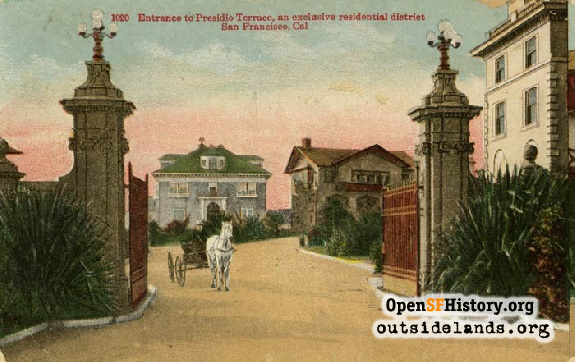 Rosemary Court—Small cul-de-sac in the Parkside District, extending east off the 2600 block of 25th Avenue, south of Vicente Street.

Seal Rock Drive—East-west residential street that begins where Clement Street ends at 45th Avenue, and then continues to El Camino del Mar above the Cliff House.

Sea View Terrace—East-west residential street that begins in the 200 block of 30th Avenue, between Lake and California streets, and runs for 1½ blocks.

Shriners Avenue—Small north-south street, located in between recently-built townhouses facing 19th and 20th avenues. The street begins just south of Lawton Street and extends to just south of Moraga Street, with a street sign marking the corner of Shriners and Moraga. A small nod to the long-time Shriners Hospital for Children once located at the site. 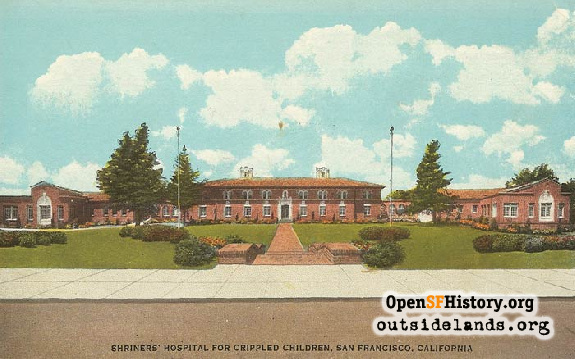 Postcard image of the Shriners Hospital for Crippled Children on 19th Avenue between Lawton and Moraga Streets., circa 1935 - WNP Collection

Stern Grove Court—Small east-west cul-de-sac beginning on the east side of 19th Avenue just north of Sloat Boulevard, built circa 1979-80 for access to three condo buildings with “official” addresses of 2770, 2780, and 2790-19th Avenue, even though the complex refers to them as “#1-84 Stern Grove Court.”

Veterans Boulevard—Beginning just north of Lake Street, between Funston Avenue and 14th Avenue (outside the Presidio boundaries), this is the approach to the Golden Gate Bridge, via the Douglas MacArthur Tunnel. Previously an unnamed street (other than its California Highway 1 designation), it became Veterans Boulevard in May of 1999, with a dedication ceremony held on Memorial Day of that year.

Yorba Street—Last of the “Spanish name” alphabetical streets in the Sunset District, runs east-west from Crestlake Drive to just west of 40th Avenue, with a small pedestrian-only path known as Yorba Lane then extending to 41st Avenue and Sloat Boulevard.

20½ Avenue—Although I never noticed it before, there it is—a paved alley one block long, from Kirkham to Lawton streets, between 20th and 21st avenues—no signs.