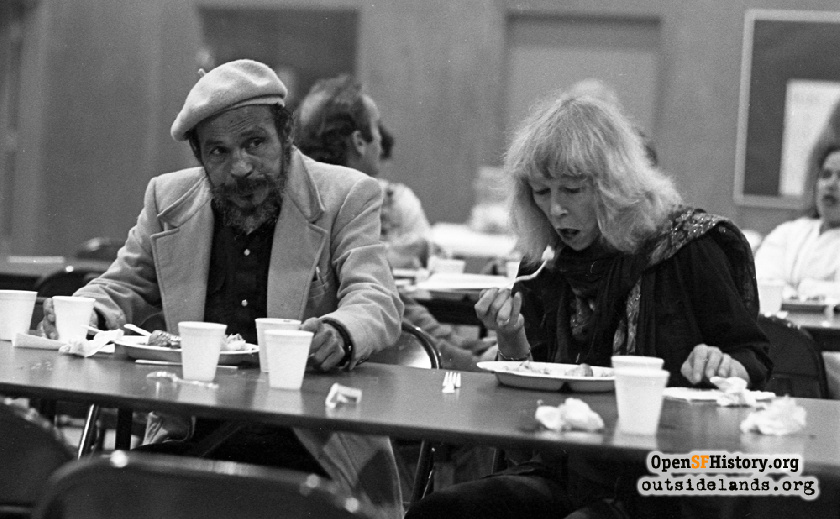 Streetwise: Thanksgiving Memories in the Outside Lands

Frank Dunnigan looks back at the years of Thanksgiving traditions in the Outside Lands in this month's Streetwise column.

Streetwise: Thanksgiving Memories in the Outside Lands

Frank Dunnigan, WNP member and columnist. -
With four-score and ten Thanksgivings under my belt, I’ve had my share of varied holiday experiences. These celebrations have usually been with family, but sometimes just with groups of friends. Most often these gatherings were held at someone’s home including my own, but occasionally in a restaurant. One year, there was a very small group (3 people from 2 self-isolating households during Covid in 2020), most years 8 to 10 people, and regularly 20+ guests when Mom’s mother was still hosting back in the early 1960s. My own Thanksgivings have been spent mostly in California or Arizona, but often with cousins in Colorado, Texas, or Maryland. All have been enjoyable—even during the years when there were a few culinary glitches.
Restaurants can relieve people of much prep work, with several places offering Thanksgiving specials. In my very young days, Dad’s mother often hosted the family’s celebration at Grison’s on Van Ness Avenue, her preferred choice since the 1930s. The big draw there was that each table’s leftover turkey carcass and side dishes would be boxed up by the kitchen staff and sent home for use as next-day leftovers. Grandma absolutely loved this plan—a stress-free meal plus a clean kitchen when she returned home. 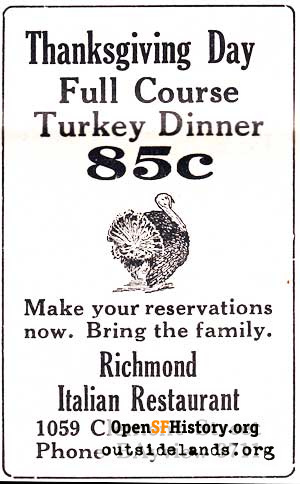 Ad for Richmond Italian Restaurant at 1059 Clement, November 21, 1930 - Courtesy of Richmond Banner.
Most of the time, though, we had Thanksgiving at a relative’s home when I was growing up. My parents had decided years earlier when I first came onto the scene, that we would spend Thanksgiving with family members, and then invite all those relatives to our house for Christmas—no sense in trying to separate a child from the gifts under the Christmas tree!
Once the decision was made to eat at home, planning went into high gear. Choices had to be made about who was to be invited, whether to serve each plate from the kitchen (which was the standard in the early days) or serve-yourself, buffet-style. The second method has grown more popular among my family in recent years and assures that finicky eaters—both young and old—get exactly what they like and in the correct portions.
Purchasing a turkey, plus ingredients for appetizers, side dishes, beverages, and desserts then becomes the next order of businesses. House cleaning also had to be planned, followed by setting the table—with or without the separate dreaded “Children’s Table”. That vintage crystal dish, used only for cranberry sauce each year, was always carefully washed in advance of the big day.
There was also the question of seating—open seating at the table vs. assigned places. With children available, construction paper in colors of yellow, brown, and orange was be used for cut-out turkeys and fall leaves, and those with good penmanship would fill in the names. Of course, in today’s world, laptop computers and ink-jet printers might be the preferred choice for kids preparing place cards. 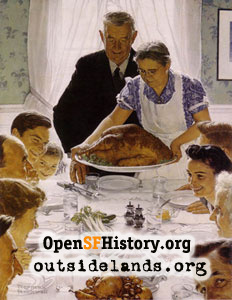 Freedom from Want painting, n.d., by Norman Rockwell, Saturday Evening Post, March 6, 1943.
Side-dishes often present a challenge—how many different ones are necessary and how many constitute “too much”? It’s a tricky thing. Growing up, Grandma’s dressing, stuffed into the enormous bird, was the only one. Today, if I am hosting, there is always a second variety as well—sometimes cornbread, sometimes spinach-Italian sausage, and sometimes a mixture of many different breads—whole wheat, rye, French, leftover biscuits, or raisin bread, etc.
And how many vegetable dishes? Many 1950s Moms used to rely on a couple of boxes frozen peas & carrots, boiled to death and served with nothing more than a pat of butter, but other tables might include a variety of multi-color options: corn casserole, carrots, or creamed spinach, pickled beets, or cheddar-scalloped baby onions. The most successful vegetable dish I ever served for Thanksgiving was last year when my friend Claudia from high school days shared her recipe for Golden Broccoli Casserole (a combination of chopped broccoli, onions, cream of chicken soup, mayonnaise, Velveeta cheese, and crushed Ritz crackers), which was so good that there were no leftovers at all and I had to make another full Pyrex casserole for the next day’s dinner of leftovers.
Desserts pose another tricky question—ranging from “too many” to “not enough”. Pumpkin pie and apple pie are two traditional choices. My Napa Valley cousin, Kathy, would always serve an additional choice—lemon meringue pie, which had great palate-cleansing properties, while my Colorado cousin, Dennis, is an absolute master of home-made pecan pies, with the nuts arranged in perfect concentric circles, and each pecan pointing to the center. My Uncle Jack used to be a big fan of classic mincemeat pie, but he has been gone since 1988, so that choice has disappeared from our family’s table. 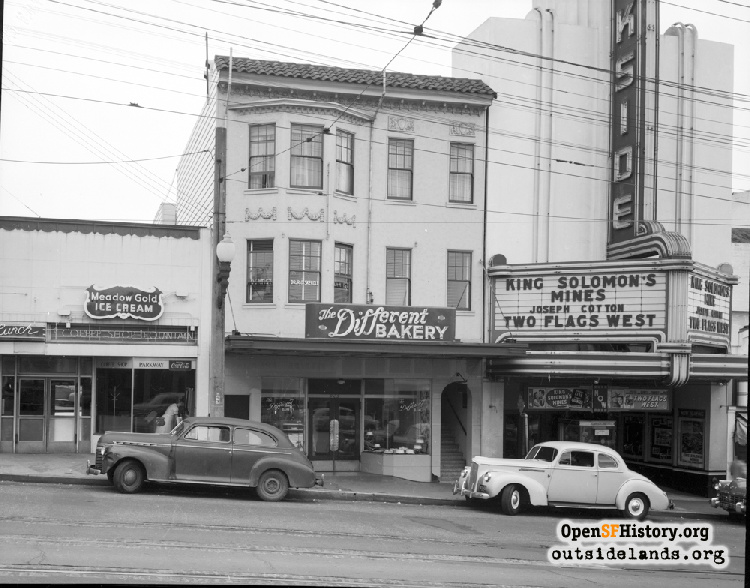 The Different Bakery and Parkside Theatre on Taraval near 19th Avenue, 1951 - SF Assessors Office Negatives / WNP Collection.
One grandmother made her pies from scratch, while the other relied on an old-standby, The Different Bakery, on Taraval. Once I had my driver’s license, my assignment every Thanksgiving morning in the late 1960s was to drive to Ahern’s Bakery on Van Ness Avenue to pick up the pies that my aunt had ordered, but later, she and Mom both relied on a freezer stocked with creations from Mrs. Smith or Marie Callender. Recent years have attested to the popularity of Costco’s pumpkin pie, while I’ve perfected a pretty good simple apple pie with a crumble crust topping. 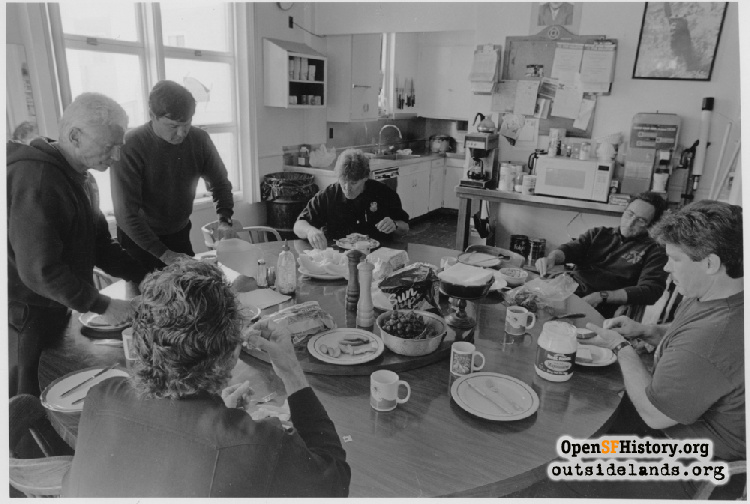 Firefighters eating together at Fire Station 18 at 1935 32nd Avenue, 1990s - Nick Wadler, photographer - Richmond Review Newspaper Collection / Courtesy of Paul Kozakiewicz, Richmond Review.
Sometimes the personal work schedules or living arrangements of some family members will dictate the most convenient setting for the annual meal. Often a fire house or senior living facility will be a good choice and offer a memorable setting for guests. 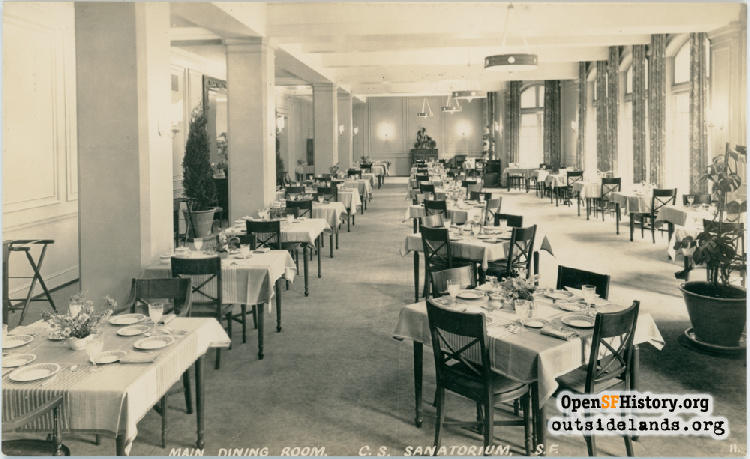 Main dining room at Ardenwood on Wawona near 15th Avenue, 1940s - Marilyn Blaisdell Collection / Courtesy of Molly Blaisdell.
Sometimes, families or groups of friends choose to be volunteer food servers at various places that host Thanksgiving meals, and the volunteers themselves are often invited to sit down and join in. This author did that one year in the 1980s with a group of co-workers at mid-day before joining family members a few hours later for another meal. “Pace yourself” is always a key concept on Thanksgiving Day. 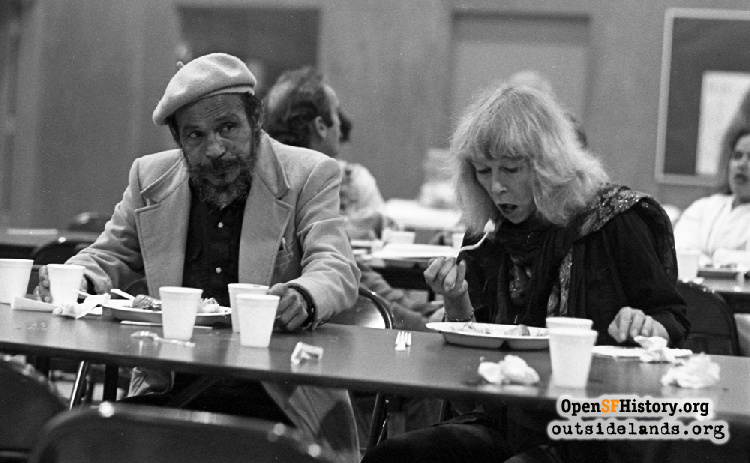 Thanksgiving Free Feast at SF Boy's Club on Page near Stanyan, poet Bob Kaufman and wife eating, November 1984 - © Greg Gaar Photography - Greg Gaar Street Photography 1970s-90s / Courtesy of Greg Gaar.
Naturally, the timing of the Thanksgiving meal in many homes is always coordinated around televised football games. In San Francisco, care also had to be taken so that those attending the annual high school football playoffs at Kezar Stadium would make it to the table in time—and just for the record, Lowell beat Washington in this 1947 game! 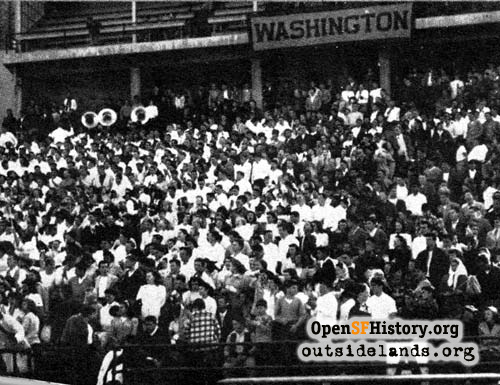 Crowd at Washington High vs. Lowell High semi-final football game, 1947 - Courtesy of Mary Ann Orr.
Culinary mishaps can be the stuff of legends for many years after the fact. In the days when most cooks sewed the cavity of the turkey shut before roasting it, a couple of cooks I knew had the misfortune to misplace the large needle, necessitating the impromptu removal of the stuffing and a pain-staking search for the missing needle—which was invariably found on the counter or on the floor. One year, I attended a Thanksgiving dinner where carrot soup was served that proved a little TOO tangy because the cook mistakenly added 1 TABLESPOON of ground pepper rather than the recipe’s listing of ¼ TEASPOON. Often, the last-minute preparation of rolls in the oven has led to those items being overlooked until the smoke alarm provided a none-too-gentle reminder. And I myself once forgot to set out the cranberry sauce—and not a single guest said a word. I later wondered what everyone must have been thinking: “Hmm…no cranberry sauce—must be a new trend”. 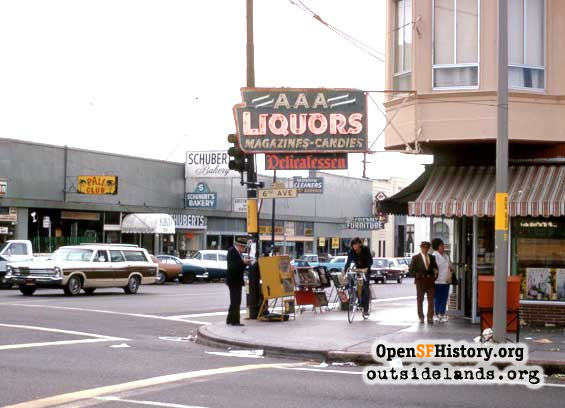 Northwest corner of 6th Avenue and Clement, 1970s - Courtesy of Dennis O'Rorke.
Last-minute needs are to be expected. Richmond District families might pop out to Clement Street to pick up a couple of more bottles of wine at AAA Liquors on the holiday itself, or perhaps an extra pie or two at Schubert’s Bakery, while West Portal Avenue’s Eezy-Freezy Market and San Carlo Liquors were always open on Thanksgiving Day for those emergency purchases by households in that neighborhood. 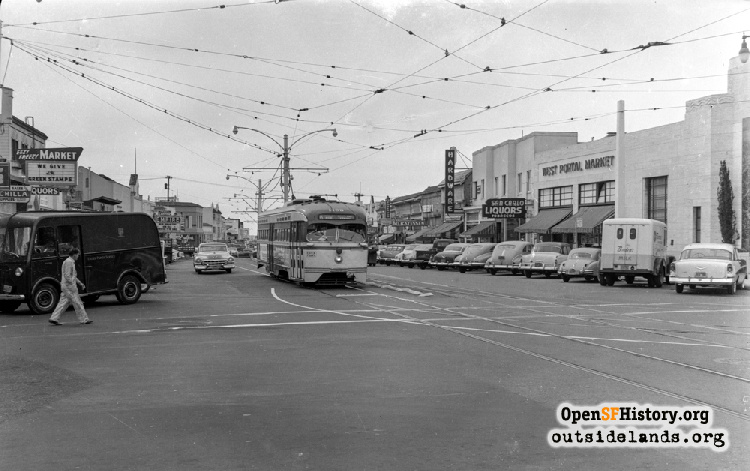 Muni streetcar on West Portal Avenue at Ulloa, 1957 - John Harder, photographer / Courtesy of a Private Collector.
So wherever—and however—you celebrate this year, Happy Thanksgiving to all!