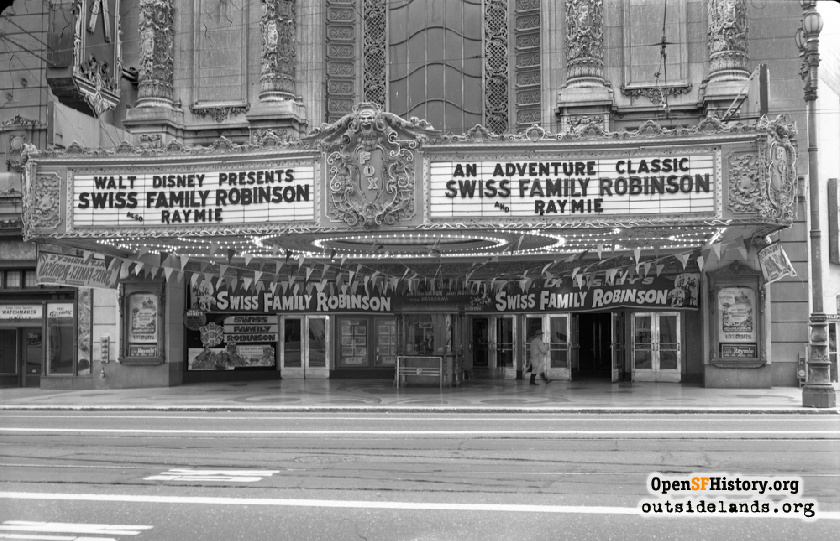 Until the 1960s, San Francisco residents knew that they were living in a movie-loving town, with many entertainment choices:

After World War II, television began to present a serious challenge to the movie industry. As United States households with television sets grew from below 1% in 1946 to more than 55% in 1954, and to more than 90% by 1962, many people were quietly transitioning from movie-goers to couch potatoes. The 1946-64 baby boom also kept many once-avid movie fans at home with their children in the evenings monitoring homework, bath times, and bedtimes.

By the early 1960s, San Francisco theatres were experiencing serious declines in ticket sales. These were the locations—now long-gone—that were once popular spots for local residents to dress up for a night out:

FOX: The biggest and best of all was the Fox, a $5 million architectural extravaganza containing 4,650 seats that opened at 1350 Market Street in June 1929 when Hollywood glitz was at an all-time high. Original plans for the largest theatre west of the Mississippi also called for a 1,000-room hotel to be built adjacent to and above the ornate theatre itself. However, a multi-million dollar cost overrun (to deal with a previously unknown river flowing beneath the building site) led to the demise of those plans. The stock market crash that October brought serious consequences to the U.S. economy and the film industry—the Fox even closed for six months in 1932-33 as a cost-saving measure. In the long-run, though, movies proved to be a popular public diversion during the Depression and World War II years. 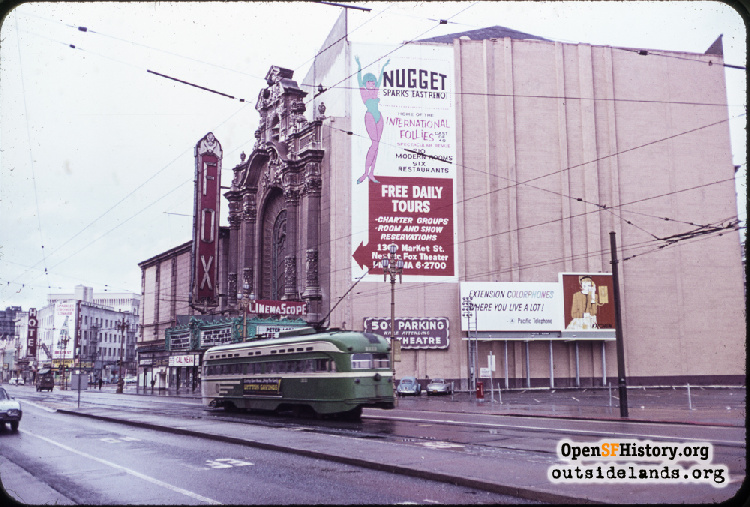 Market Street near 9th, the final weeks before the demolition of the Fox Theatre commenced., Feb 1963 -

By the early 1950s, the Fox found it difficult to fill all those seats on a regular basis. After many years of declining ticket sales, owners could no longer sustain operating losses and wanted to sell, but there were no buyers in sight. Midnight organ concerts on Saturday nights were introduced in 1960 to bolster revenues, but the crowds still did not return. Ultimately, San Francisco voters were given a choice—Proposition I (eye) on the November 1961 ballot (entitled “Fox Theatre Acquisition”) would have authorized a $1.1 million bond issue for the city to acquire the Fox as a performing arts center. Needing only a simple majority of the votes cast (50% plus 1 vote), the measure sadly went down to defeat with nearly a 60% NO vote and barely a 40% YES vote. The Fox was doomed, and the bulldozers arrived just over one year later to demolish the palatial movie palace and make way for an office/retail/apartment complex that still uses the Fox name.

Many other downtown theatres suffered fates similar to the Fox:

EMBASSY: 1125 Market Street. Under construction in 1906, this theatre opened in 1907 and went through a number of changes until being renamed Embassy in 1927. Although it was one of San Francisco’s early “talkie” theatres, it later suffered a decline along with its Market Street neighbors through the years of BART/MUNI construction in the 1960s/1970s. It finally fell victim to the 1989 Loma Prieta earthquake, after which it was closed and demolished. 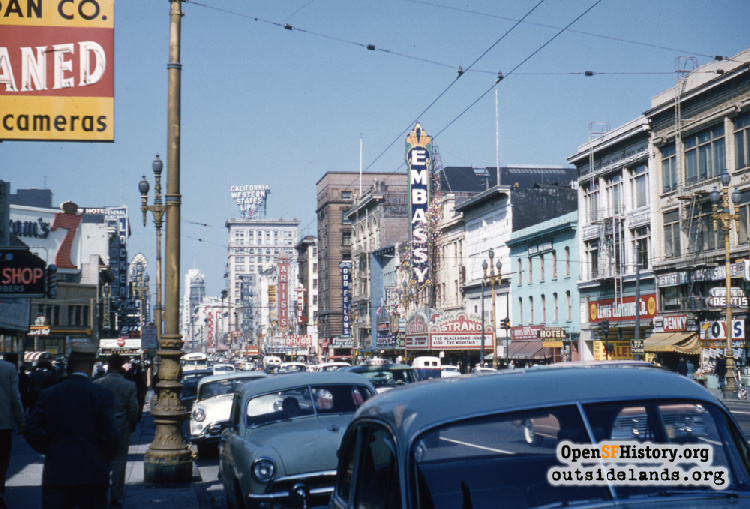 ESQUIRE: One of downtown’s first large theatres, this location at 934 Market opened in 1909 and went through several names changes until it became the Esquire in 1940. For the next 25 years, it offered first-run films from Universal Studios, ranging from Abbott and Costello comedies to popular horror films. By the mid-1960s, bookings became somewhat seedier, and the theatre was closed and demolished in 1972 to make way for Hallidie Plaza and BART/MUNI’s Powell Street station.

GOLDEN GATE: Opened in 1922, this location at Market, Golden Gate and Taylor Streets seated 2,844 patrons for both silent films and live vaudeville performances, with sound added in the late 1920s. Twinned in the 1960s, it was closed a decade later, and has since been revitalized for live performances.

ORPHEUM: Opened as Pantages at 1182 Market Street in 1926, it was renamed Orpheum in 1929—the same year that the nearby Fox opened. In 1953, the screen was converted to “Cinerama”—recordings made on three separate cameras, shown on three projectors running simultaneously. For the next ten years, this was home to long-running engagements, including "How the West Was Won," which ran for more than a full year until it closed in December 1963. Movies continued a few more years, though the site was long ago converted to a venue for live performances.

PARAMOUNT: Opened at 1066 Market in 1921 as Granada (before that name was acquired for a new theatre on Mission Street in the Excelsior District), this location with 2,600+ seats was renamed Paramount in 1931. It hosted the animated Technicolor hit "Gulliver’s Travels" in 1939. Often filled to capacity for night-time performances during World War II and later, the theatre closed in 1965 and was promptly demolished, only to be replaced by a low-slung building that has been home to a string of small offices/eateries for the last half-century. 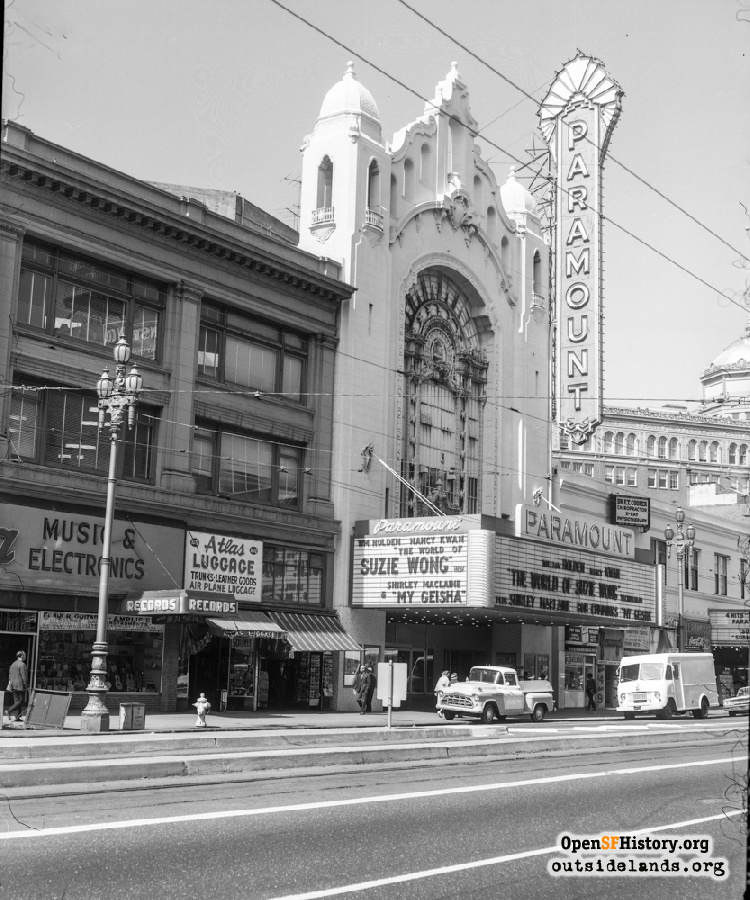 North side of Market between Jones and Taylor. "The World of Suzie Wong" and "My Geisha" playing at the Paramount Theatre. Atlas Luggage., Apr 6, 1965 -

ST. FRANCIS: The St. Francis opened at 965 Market Street in 1909 as the Empress, a vaudeville house with more than 1,400 seats. It was renamed St. Francis in 1925 and converted to movies. It acquired an Art Deco marquee in the late 1930s, and in the 1960s, it was twinned/updated with a plain front (with the upstairs renamed Baronet—later, it became St. Francis I and II). Early in the new millennium, it was still showing mainstream movies—the last place on Market Street to do so. It closed with little notice, remained vacant for more than a decade, and was demolished in 2013.

STATE: Originally built in 1917 at the southeast corner of 4th and Market as the California, this was one of downtown’s first movie palaces. Later renamed State, it struggled because most newer downtown theatres were being built several blocks to the west. It closed in 1954 and was demolished in 1961. A decade later, the Roos-Atkins clothing chain built a new store on the site, but that has long-since been converted to office space.

STRAND: 1127 Market Street. The Strand catered to bargain-conscious filmgoers with third-run features for much of its history. Suffering more than its neighbors from the decline of the mid-Market Street neighborhood (even after BART/MUNI construction was over) it eventually began screening adult videos. Closed after a 2003 police raid, it never reopened. The building is now used as a live performance site/café by American Conservatory Theater.

TELENEWS: Near the Esquire and the Warfield, Telenews opened at 930 Market in 1939 with film coverage of the Nazi invasion of Poland. It operated a newsreel/travelogue format until 1967, when it was closed and demolished to make way for Hallidie Plaza and the Powell Street BART/MUNI station. See KTVU news coverage of the 1967 closing. 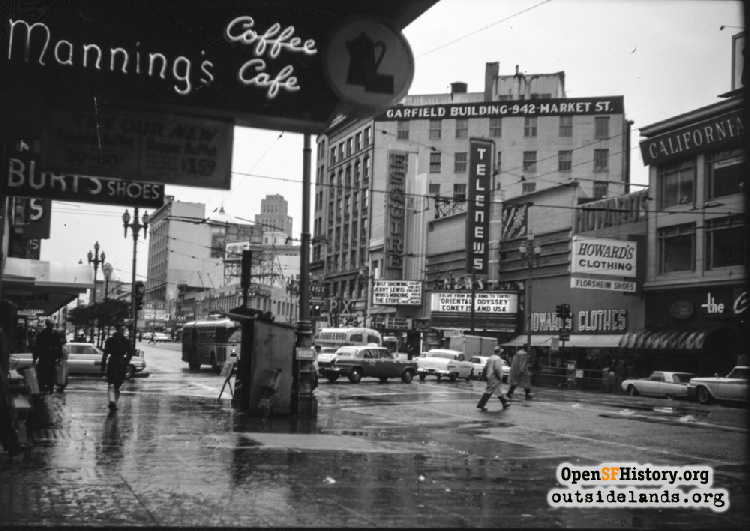 WARFIELD: Opened at 982 Market just after the nearby Golden Gate in 1922, the Warfield was another large theatre with more than 2,600 seats. This location was still enjoying long lines of night-time customers well into the 1950s for films such as "Show Boat" in 1951 and the wide-screen re-release of "Gone With the Wind" in 1954. Closed as a movie theatre in the 1970s, it continues as a live performance/concert venue.

The Western Neighborhoods were home to many now-closed screens:

ALEXANDRIA: Built with Egyptian-style architecture in 1923, it was remodeled in Moderne style in 1941, converted to a triplex in 1976, and closed in 2004. The newest plan for the site is to reopen it as a swimming complex. More information/images

BRIDGE: Opened in 1939 with second-runs, by the 1950s, this became a venue for international films, often with extended engagements: "Zorba the Greek" (29 weeks in 1965) and "Georgy Girl" (23 weeks in 1966-67). The location closed in December 2012 and is now a baseball academy, with the original sign preserved. More information/images

COLISEUM: Opened in 1918/converted to sound in 1929/damaged by the 1989 Loma Prieta earthquake and never reopened. The building was converted to housing with ground-floor retail. More information/images

EL REY: Opened in 1931/closed in 1977/home to a church from 1977-2015, and then purchased by a group of investors. The building (also home to the first GAP retail store in 1967) was granted landmark status by City Hall in 2017. Future uses are under consideration. More information/images

IRVING: Opened in 1926/demolished and replaced with an apartment building in 1962. More information/images

PARKSIDE: Opened in 1928/renamed Fox Parkside in 1965 and lost its iconic red marquee/interior reconfigured in 1976/closed in 1988. Now a preschool with condos on the upper floors. More information/images

SURF: Opened in 1926 as Parkview/renamed Sunset in 1937/renamed Surf in 1957/closed in 1985. The building has been home to a church for many years. More information/images

Finally, the drive-ins—something that local kids will never experience:

GENEVA: Opened in 1950 on Carter Street, just off Geneva Avenue in Daly City near the Cow Palace. The site operated as a single-screen for more than 25 years, and additional screens were added in the 1970s. It closed in 2000 and was demolished in 2002. The adjacency of the Cow Palace often produced monumental traffic jams when scheduled events wrapped up simultaneously.

MISSION: Located just over the border in San Mateo County, the Mission Drive-in advertised a San Francisco address of 5500 Mission Street. It opened on Guttenburg Street in a hilly part of Daly City in 1951 and was closed in 1976. Both the Geneva and Mission drive-ins had well-deserved reputations as homes to “rough” clientele: public intoxication, fist-fights, and even gunfire were regular occurrences.

TERRACE: Technically, the only drive-in located within San Francisco city limits was the short-lived Terrace on Alemany Boulevard near the Farmers Market. Long plagued by foggy nights, the location operated only from 1951-54, and the site is now part of the Interstate 280 right-of-way.

In the end, though, theatres may be on the verge of a come-back—as evidenced by the refurbishment/reopening of the New Mission Theatre and newer multiplexes along Van Ness Avenue. Likewise, the long-closed Presidio Theatre, built in 1939 by the WPA on the one-time military base, is scheduled for a 2019 reopening.

In addition, Stonestown Galleria owner General Growth Properties has announced tentative plans for a new multiplex theatre/restaurant venue to replace Macy’s (former Emporium site), though the company has given no indication about how such a change might impact the UA Twin Cinemas (opened 1970/twinned 1972) at the western edge of the Stonestown property.

This column is not at all a complete overview of local theatres—rather a mere glimpse at many of the now-vanished locations that were once frequented by residents of the western neighborhoods. For a complete listing of San Francisco theatres—open and closed (sadly, with even more locations shut down since the book’s publication)—see WNP member Jack Tillmany’s excellent history, "Theatres of San Francisco," Arcadia Publishing, 2005.