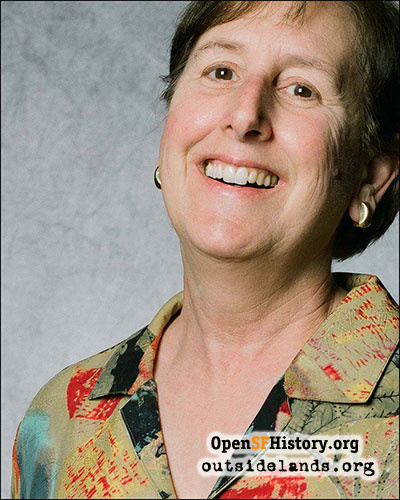 Profile of author and west side historian Lorri Ungaretti.

The western side of San Francisco was largely overlooked by historians and travel guides until near the end of the last millennium. Then in 1998, Woody LaBounty and David Gallagher began to have some serious discussions about the possibility of forming an historical society for the Richmond District—or, perhaps, they thought, a group that might focus on “overlooked neighborhoods.” After soliciting input from many people, Western Neighborhoods Project (WNP) officially came into being on May 15, 1999. Read the full story.

And now that this group has achieved the ripe old age of 18 years—an adult by every measure of the term—it’s time to take a closer look at some of those who have helped WNP reach this milestone. This column is the first of some occasional Streetwise installments that will focus on people who have contributed to life in the Outside Lands, starting off with local author Lorri Ungaretti. 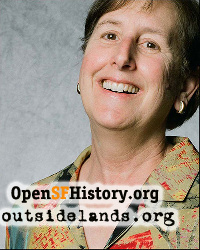 Born in the fall of 1952, Lorri had a traditional childhood growing up with her parents and an older brother on the 2100 block of 22nd Avenue, between Quintara and Rivera Streets. Her first school in 1957 was the tiny Juan Crespi Home School, then located at the southwest corner of 24th Avenue and Quintara. This was an institution set up by the San Francisco Unified School District in response to the large number of post-World War II baby boomers in the western neighborhoods (other similar institutions included Noriega Home School at 45th Avenue and Noriega Street, Phoebe Apperson Hearst Home School at 41st Avenue and Santiago Street, and Jose Ortega Home School at Sargent and Arch Streets in Merced Heights). These schools were kindergarten through Grade 4 at the time, and Lorri herself documented many of her own pleasant memories of Crespi in a 2005 WNP article entitled The Forgotten School.

Lorri’s parents, following the standard practice of the day, allowed her to walk to school on her own beginning in kindergarten—something that might shock some present-day adults, but that’s merely one example of just how safe San Francisco was at the time. Lorri remembers that she was sometimes able to run home at lunch to retrieve a forgotten sandwich or school assignment, since she lived so close by.

During those days, Lorri favored many of the standard “kid” activities of the time: playing hide-and-seek, roller skating, bike riding, playing jacks on the sidewalk, or meeting friends at the nearby Lincoln High School schoolyard. Surprisingly, many of these once-popular pastimes are virtually unknown to many children today. The parental rule back then was simple: “be home before the streetlights come on.” Like most families in that era, dinner was at a set time, 6:00 p.m., shortly after the entire family—parents and children—had returned home from work and school. 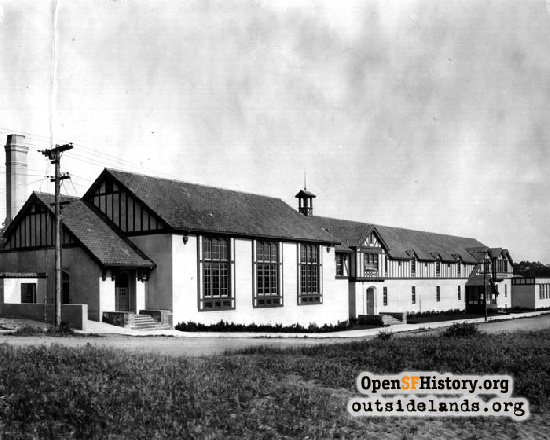 Lorri later moved on to the old Parkside School at 24th Avenue and Vicente Street, still walking to class each morning with hundreds of other nearby children—years before the establishment of the present-day “drive-through/drop-off.” Long-time principal Miss Amy E. Wisecarver presided over the main office (symbolically located up a small three-step staircase from the hallway), with the help of her faithful assistant, Mr. James Rodman. Lorri completed 5th and 6th Grades at Parkside and served as a traffic girl there in the early 1960s, including being promoted to Lieutenant in the 1963-64 school year. For many youngsters, this was an important first step of participating in a non-classroom activity that involved looking after others. Read more about school safety patrols.

In those days, elementary school youngsters were routinely allowed by their parents to ride Muni with friends to the zoo, Fleishhacker Pool, the Japanese Tea Garden, de Young Museum, Steinhart Aquarium, and downtown San Francisco after school and on weekends, with no concerns for personal safety. Since these venues were mostly free at the time (Fleishhacker Pool had an admission fee of one thin dime), and with a 10-ride Muni car ticket costing only 50 cents, money was never a concern. Lorri recalls that by the age of eight, she was routinely riding Muni around San Francisco with her friends, exploring all that the city had to offer. Lorri’s mother was a schoolteacher who had summers off, and the family often spent summer vacation months at a cabin in the Santa Cruz Mountains. 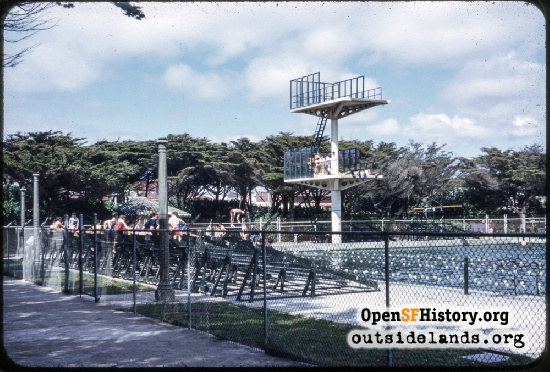 After Parkside, Lorri’s family moved to the East Bay community of El Cerrito for a few years and she completed Grades 7—9 there before returning to the Sunset and enrolling at Lincoln in the fall of 1967. A good student, she soon developed a strong liking for subjects that involved reading and writing. Like many of her peers, she continued to be a frequent Muni rider into downtown San Francisco at a time when BART construction was in full swing, with the Market Street scene being far more diverse and eye-catching than anything that was taking place on the quiet streets of the Sunset District. Lorri was a detailed observer of her surroundings and later she was able to add clear background to all of her writings.

Following high school graduation, Lorri was accepted at the University of California and made the move to Riverside for two years of dorm life (“A great place to meet many new people,” she reports.), plus one year of sharing an apartment with a roommate. She then moved back to San Francisco and finished up at San Francisco State University. During college, she worked for both the Social Security Administration and the Internal Revenue Service in downtown San Francisco, riding Muni back and forth to work each day with tens of thousands of others from the western neighborhoods.

After graduating from college and obtaining her teaching credential, Lorri then accepted an administrative position at St. Ignatius College Preparatory on 37th Avenue—a great resumé entry for someone who planned to enter the field of education. Times were changing in the mid-1970s, though, and there were fewer and fewer children enrolled in local elementary schools, due to declining birth rates and the relocation of many families to the suburbs. Annual teacher layoffs in the public elementary school sector were becoming widespread in the San Francisco Unified School District in the 1970s, generating front page headlines.

Lorri’s career interests then began to shift toward writing and editing, and she quickly found herself in demand as an editor reviewing the work of others. She even moved to Pennsylvania for two years in the 1980s to accept her “dream job” on a magazine. In the early 2000s, she became a San Francisco City Guide, leading organized tours of the Inner Sunset where she lived for several years. Natural curiosity about the neighborhood, its topography, and the growth and development of the area led her to begin researching many of these topics. When she complained that there was no definitive book on the history of the Sunset District, her mother replied, “You need to write it.”

At the same time, Lorri discovered the website of Western Neighborhoods Project, and soon became an active participant, leading to her appointment as a member of the group’s Board of Directors. Shortly thereafter, when Arcadia Publishing contacted Woody LaBounty, asking him to suggest a possible author to write about the Sunset District for Arcadia’s iconic Images of America series with the sepia-toned covers, Woody promptly gave them Lorri’s name.

Embarking on a project that she truly loved, Lorri dedicated nearly two years to producing San Francisco’s Sunset District, which was published in 2003. With a format of 128 pages and 200 photos, the Arcadia series presents a challenge to authors because the publisher encourages them to tell the bulk of their stories through the longer-than-usual photo captions, often 50-100 words in length. Lorri tapped into her own family’s photos, researched the holdings of other long-time residents, and dug deep into the San Francisco Public Library’s extensive photo archives. Her eye for detail and extensive knowledge of local history enabled her to tell excellent stories in each and every one of the 200 photo captions. The publisher, clearly pleased with the result and with the public’s enthusiastic response to the book, quickly commissioned Lorri to write another volume, San Francisco’s Richmond District, which she completed in 2005.

Continuing with her City Guides and editing work, Lorri still had a significant amount of materials—both stories and photos—left over after the publication of her first two books. Over the next decade, she was able to organize these resources into three additional books:

Stories in the Sand/1847-1964 (published 2012)—Historical narratives about the growth and development of the Sunset District, from pre-Gold Rush days to the mid-1960s.

Legendary Locals of San Francisco’s Richmond, Sunset, and Golden Gate Park (published 2014)—A series of interesting biographies about the many diverse residents of San Francisco’s western neighborhoods and others who contributed to local history. Included are more than 100 life stories of people from many diverse backgrounds, including Ansel Adams, Gracie Allen, Josephine Foreman Cole and her husband Audley, Barbara Eden, Dr. William Gee, Vince Guaraldi, Makato Hagiwara, Johnny Mathis, Fernando Nelson, Sister Mary Justina Niemierski, William Saroyan, Rosalie Meyer Stern, and dozens of others. Not sure who all of these people are? Then buy Lorri’s book through WNP—it’s a great read! To find this, and other books by Lorri, just visit the WNP Store.

Lorri reports that finding and securing photo rights to vintage images was a particular challenge, though discovering new and interesting photos is always a major part of the excitement of book publication. Among her favorite vintage pictures are Carl Larsen’s chicken ranch near the present intersection of 17th Avenue and Noriega Street with the rolling sand dunes of the Sunset District stretching all the way to the ocean, and a 1940s image of a woman standing in the backyard of her Doelger-built home, with sand drifts almost up to the top of the five-foot fence. 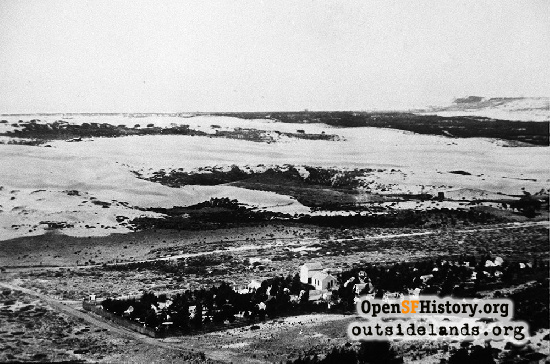 Today, Lorri’s work as a freelance editor occupies much of her time, though she is still an ex-officio member of the Board of Directors of the San Francisco History Association and is also the part-time administrative director of the San Francisco Museum and Historical Society. Although she currently has no new books on the horizon, that situation is always open to change.

Lorri’s advice to others who wish to write? “Talk with others who know about your subject—join groups, make contacts, plan to LEARN from other historians and from people who have lived your subject.”