Some things everyone who lived in west SF knew without saying.

Some time back, I shared a lot of the specific words of wisdom that had been drilled into me over the years by a variety of family, friends, neighbors, and co-workers in the Western Neighborhoods (See Streetwise, May 2010). Now it's time to look at some of the unspoken facts that helped to define things—little truths and truisms from years gone by that everyone in the Western Neighborhoods just seemed to know about instinctively. And it's amazing how many of these items seem to relate to food…

The bread is never fresh on Wednesdays.

Take the milk from the back (in the days before open dating of dairy products).

The air raid sirens go off every Tuesday at 12 Noon.

The last Sunday of April is Opening Day for sailing on San Francisco Bay.

You know the schedule for Sunday summer concerts at Sigmund Stern Grove.

You know the date for Opening Day for the Giants first home game.

You know when Fleet Week will take place even before hearing the jets swoop past.

Houses generally cost more in 94116 than in 94122 (with the demarcation line at Ortega Street).

After World War II, many people came to the Sunset from the Mission, Western Addition, or North Beach.

You can spot a Rousseau-built house half a block away.

Neighborhood merchants were always closed from 12 Noon to 3 p.m. on Good Friday.

The bars were always closed until 8 p.m. every Election Day.

Beach Chalet was nothing more than a smoke-filled VFW hall with a bar.

Sutro's, Playland, and Fleishhacker Pool were all great people-watching places.

Herman's on Geary was the best place to go for potato salad.

Baronial Bakery on Taraval Street had the best doughnuts in the Sunset. 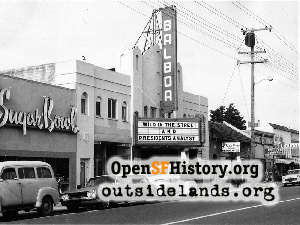 Sugar Bowl Bakery on Balboa Street had the best doughnuts in the Richmond.

Wirth Brothers on Geary had the best Danish pastries in the Richmond.

Fantasia on California Street had the best cakes in the Richmond.

Golden Brown Bakery on Irving had the best cakes in the Sunset.

QFI at Stonestown had the best meat and produce.

In the 1970s, 22nd & Taraval Market was a full grocery store with an excellent meat department.

In the 1980s, 22nd & Taraval had become an excellent produce-only market.

In the 1990s, 22nd & Taraval had become a Walgreens, with neither meat nor produce.

In the 1950s, everyone spent time in the summer at Rio Nido, Guerneville, or Monte Rio.

In the 1960s, everyone spent time in the summer at Marin Town & Country Club in Fairfax.

In the 1970s, everyone spent time in the summer at Konocti in Lake County.

Well-dressed ladies shopped for clothes at Livingston Brothers—Downtown and Stonestown.

For years, St. Edward's Church on California Street had the latest Sunday Mass in SF at 4 p.m. 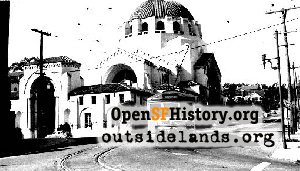 Car #222 of the 4 Sutter-Sacramento streetcar line at Arguello and Lake streets. March 5, 1940. Temple Emanu-el behind. -

The best place to attend services on the High Holy Days is Temple Emanu-el.

The best place to attend Midnight Mass at Christmas and Easter is St. Ignatius Church.

The 2600 block of 18th Avenue was always the best place to see outdoor Christmas lights.

Most Jewish families celebrated only the first night of Hanukkah, except those with children who celebrated all eight nights.

No politicians have stayed at the Palace Hotel since President Harding died there in 1923.

Until 1965, Democrats took the Examiner as a morning paper and Republicans took the Chronicle.

Prior to its 1965 demise, many people regarded the evening News-Call-Bulletin as little more than a scandal sheet.

When you can see the Farallones clearly, rain is on the way.

There were numerous gas stations on and near West Portal Avenue.

The best neighborhood Mexican restaurant in the 1950s and 1960s was the Hot House at Playland.

The best sit-down Chinese food is still Yet Wah on Clement Street. 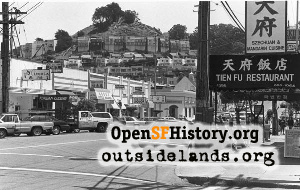 The best Chinese restaurant in the Sunset that offered delivery was Tien-Fu on Noriega Street.

The best kosher deli was Gilbert's on Noriega.

The best Sunset District pizza is still Pirro's on Taraval.

The best neighborhood movie theater was the Coronet on Geary.

There always used to be a bar adjacent to long-established undertaking parlors.

20th Avenue in the Sunset is wider than most streets because the #17 streetcar line used to run there. (Take a virtual ride on the 17!)

30th Avenue in the Sunset is wider than most streets because of a never-built streetcar line there.

Men always tipped or touched the brim of their hats when passing in front of a Catholic church.

The best neighborhood Italian food was always West Portal Joe's or the Gold Mirror on Taraval.

The best place to spend a day with the kids was the Fleishhacker Zoo, which was free until 1970.

The best hot meatball sandwich was at Herb's Delicatessen on Taraval (every Thursday).

The best Sunday brunch was at the Cliff House, followed by a walk through Sutro's.

The best place to see rhododendrons in bloom is the Rhododendron Dell, JFK Drive and 8th Avenue in Golden Gate Park.

The best place to see roses in bloom is the Rose Garden at Park Presidio & Fulton in Golden Gate Park. 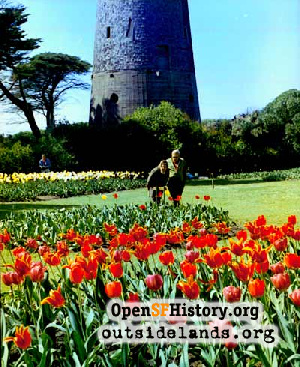 The best place to see tulips in bloom is the Dutch Windmill at Ocean Beach in Golden Gate Park.

You can buy the Sunday paper on Saturday, but then you miss the updated Sunday obituary section.

The grocery coupons and the food section are always printed in the Wednesday newspapers.

In pre-thermostat days, gas furnaces could be set to run at HI, MED, LO, and were almost always kept on LO, except from Labor Day to Thanksgiving when they were usually OFF.

Hibernia Bank's one-time branch at 22nd and Noriega will forever be known as "the Patty Hearst branch" since the April 15, 1974 robbery by the Symbionese Liberation Army.

Every family had at least one member who "worked with A.P. Giannini" when Bank of America was still Bank of Italy (1904 to 1929).

Many Jewish San Franciscans sent their Christian neighbors all leavened products in the house prior to Passover.

Many Christian San Franciscans returned the favor by sending their Jewish neighbors the overload of chocolate candy in the days following Easter Sunday.

Ukraine Bakery on McAllister Street was the best place to buy challah.

Larraburu in the Richmond District made the best French bread.

Liguria Bakery at Stockton and Filbert is still the only place in San Francisco to buy real focaccia.

Walgreens, now on just about every street corner, had its first big SF store in Stonestown in 1952.

Emporium's second store was in Stonestown, which opened in 1952, and had the telephone number (SEabright 1-2222 while the original downtown store was YUkon 2-1111).

Le Cyrano on Geary near 6th Avenue was the best French restaurant in the 1970s. 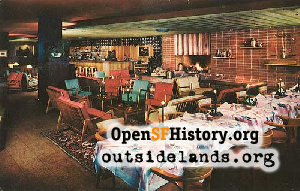 Interior of Rickey's Red Chimney at Stonestown. Postcard image possibly from the 1960s. -

The Red Chimney was a popular local restaurant adjacent to the Emporium in Stonestown.

The Red Roof, with branches on California Street and on Ocean Avenue, was a completely different business, owned by attorney-politician Harold Dobbs who also founded the iconic Mel's Drive-In.

Zim's (their motto: "Zim's—Where Else?") had the best BROILED hamburgers and thick milkshakes from about 1950-1995 (more than a dozen SF locations during the peak years).

Maison Gourmet inside the QFI Market at Stonestown sold "Pizza Pups"—a slice of cheese pizza wrapped around an all-beef hot dog—for 29 cents back in the early 1960s.

In deference to local florists, newspapers would never use the phrase "no flowers" in paid obituaries, opting instead for "donations to your favorite charity preferred."

Neighbors always sent platters of food, casseroles, or cakes (rather than flowers) when someone died.

Fourth of July is always cold and foggy.

Halloween is usually damp and drizzly.

Never try to drive north on 19th Avenue on Thanksgiving afternoon or you will be stuck in traffic. 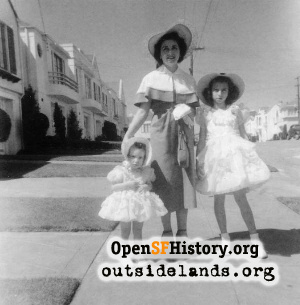 Guglielmore family in Easter bonnets on 32nd Avenue near Moraga, 1952 -

Easter was not complete without a visit and photo with the Easter Bunny at the Big E in Stonestown, plus a look at the baby chicks which were due to hatch in the last few days before Easter.

Entrances to apartment towers at Stonestown and Parkmerced were unlocked until the mid-1970s.

Kids checked the coin return slot on every pay phone for overlooked dimes.

"Save your pennies for the parking meter."

There was always a place to park your car near your destination.

A streetcar or bus ride was always cheap and reliable, so very few people bothered to drive downtown.

Street sweeping was something that fastidious retired people did daily in front of their own homes.

Borden's delivered most of the milk in the Sunset District in the 1950s.

On Saturday afternoons, you could always bump into a neighbor at Sears on Geary and Masonic.

As late as the 1960s, many neighborhood pharmacies still delivered prescriptions at no extra charge.

Notre Dame (American pronunciation) on Dolores Street was a Catholic grammar school and high school (the high school closed in 1981).

People who live anywhere south of San Francisco were said to be "down the Peninsula."

People who live anywhere east of San Francisco were said to be "across the Bay."

People who live anywhere north of San Francisco (Sausalito to Canada) were said to be "up north."

Any location between Bakersfield and Mexico was described as "down in L.A."

"Knotty pine" always described a basement room and was usually accompanied by "and 1/2 bath."

Neighborhood libraries were usually open from 9 a.m. to 9 p.m.

The Merced Branch of the Public Library at 19th and Winston was the newest and most comfortable.

The park was always Golden Gate.

The zoo was always Fleishhacker.

The tunnel was always Twin Peaks.

The boulevard was always Sunset.

The beach was always Ocean.

The weather was usually foggy.

The place was called HOME.