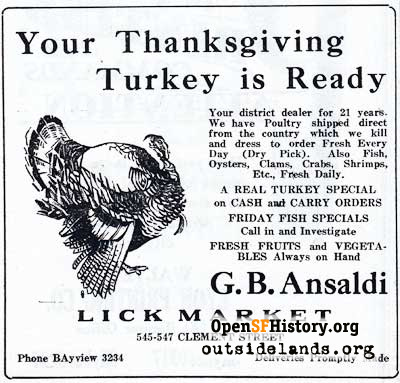 Streetwise: The Ways We Give Thanks

Streetwise - The Ways We Give Thanks

Nothing says tradition quite like Thanksgiving. It is probably our most ritualistic holiday, right down to the never-changing main course for dinner—and most families likely have several other details that remain the same, year after year. As we again approach this holiday with family and friends, what’s it going to be like?

For my family, it will be very much like the holidays that Grandma spent with my dad and uncle on 21st Avenue near Rivera beginning in 1937, or the half-century that our family lived on 18th Avenue near Vicente, perhaps with a few subtle little tweaks that I’ve added into the mix since I moved into my first apartment on Arballo Drive in Parkmerced back in 1976.

It’s a given that the cook never wants to see guests scarfing up too many hors d’oeuvres and then losing their appetites for the big event. Celery sticks, stuffed with Kraft Pimento cheese (from one of those little jars) and then dusted with paprika, have been a Thanksgiving-only staple in Mom’s family since before World War II. If a big crowd is expected, there may also be one small dish of pitted olives on the coffee table. Guests have time for exactly one small glass of wine before dinner, and THAT’S IT.

We are a moderately religious family, though saying grace is a tradition reserved exclusively for Thanksgiving dinner. Over the years, we’ve also included a new tradition of adding a word or two as the meal begins about exactly what each of us is most thankful for that year. Smiles of appreciation always emerge as someone extends a particular word of gratitude to someone else at the table for some small but significant act of kindness that took place in the prior twelve months.

Our meal then begins with Mandarin Orange Salad, composed of orange sherbet, mandarin orange segments, and orange Jell-O and made in the same white Tupperware mold—something that Mom first introduced circa 1967 when she received a copy of the recipe from her old high school classmate and 18th Avenue neighbor Genevieve O’Callaghan. One year I served a second orange dish, a spicy carrot soup, just before the main course. The reaction of the guests that one time convinced me of three important rules: #1)—Never try out a new dish on company, #2)—Serving soup AND salad is simply too filling for Thanksgiving dinner, and #3)—Never trust a recipe that is printed on the back of a can of black pepper. 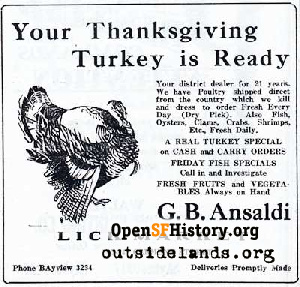 Naturally, there will be one roast turkey, front and center, prepared in the large oval gray enamel Nesco roasting pan, dinged and battered from nearly a century of use, that originally belonged to my great-grandmother, circa World War I. Despite its appearance, it turns out the perfect turkey, year after year. The golden brown bird will be carved and then served on that same big Blue Willow platter that evokes memories of Grandma’s breakfast room on 21st Avenue. It will be stuffed with Mom’s favorite recipe—seasoned croutons, onion, celery, parsley, extra poultry seasoning, and chicken broth. No apples, nuts, raisins, eggs, butter, sausage, etc.—just because that’s the way it’s always been in our family. To suit other tastes, though, for about 15 years now, I have also been making a casserole of cornbread dressing, with corn kernels and smoky chopped ham. If I’m having a big crowd, then I’ll add my friend Mary’s recipe (from her husband’s grandmother) for yet another side dish, one that includes both hot and mild Italian sausage, spinach, and a full stick of butter—no one ever said that Thanksgiving dinner was a meal for dieters!

There are always two kinds of cranberry sauce—one made from scratch, with cooked cranberries, sugar, spices, and ground orange peel, along with one “regular”—a can of jellied Ocean Spray, unmolded onto the same glass dish of Grandma’s that has held nothing else in its entire life. Alongside the cranberry sauce, there will be a dish of applesauce in the pineapple shaped ceramic bowl that Dad sent to his mother one Christmas when he was stationed in Hawaii during World War II. Likewise, that dish has held nothing else in its 70-year life span.

Being Irish, mashed potatoes are another required feature item, and many people in our family hold firm opinions about smooth vs. lumpy. One grandmother insisted on smooth and the other lumpy, and Mom was defiant enough to favor her mother-in-law’s smooth version over the one usually prepared by her own mother. I like to rattle people a bit by leaving in just a few lumps, just so that everyone knows that the potatoes didn’t start out as flakes from a box. Vast quantities of gravy will be simmering quietly in a Crock Pot on the kitchen counter.

Vegetables are always a toss-up, and I tend to favor a variety of fall colors here—some sort of corn dish is always present, along with a second dish containing a green vegetable, usually string beans, but never Mom’s old standby of frozen peas. Carrots might put in a featured appearance, and if I’m especially pressed for time, a couple of defrosted Stouffer’s Spinach Soufflés baked in a casserole dish provide an easy addition. Several years ago, I found a recipe for Cheddar Scalloped Baby Onions that I liked very much, and guests never failed to mention them afterwards. I still prepare this recipe only at Thanksgiving, though one year I was surprised when a guest—someone who had raved about the onions just the year before—spooned exactly one baby onion onto her plate. “I thought you said that you liked those a lot,” I said, and she replied sweetly, “I never said that I liked them—I just said that it wouldn’t be Thanksgiving without them”—and that certainly seems to define quite a few holiday traditions in every family. 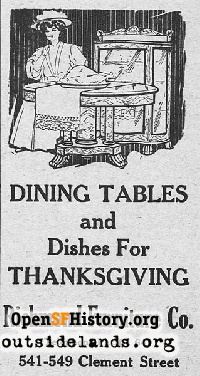 And then there’s bread—ah bread! For the last several years, my 28-year-old god-daughter has turned out marvelous round loaves of fragrant, crispy-crusted, soft-centered bread from a Dutch oven, and that sure beats waiting around for brown-and-serve rolls to brown ever-so-slowly. One group of friends can always be counted on to bring homemade Mexican corn bread muffins—made with sour cream, green chili peppers, and fresh corn kernels, along with a dish of honey-butter—mmmmmmm!

Wine did not make a regular appearance on our family’s dinner table when I was growing up, but in later years, Grandma befriended a couple of retired Christian Brothers in Napa County, who regularly sent her a few bottles of Chateau LaSalle for the holidays. To my taste, it’s like mixing Welch’s white grape juice with a hefty dose of sugar. Once I was in college, I introduced a nice dry Riesling or Gewürztraminer, and that’s the way it’s been in our family ever since. Wine is still being served in the same little 5-ounce stem glasses that Mom & Dad received as wedding gifts in 1947.

For those who still have an appetite when dessert time rolls around, tradition continues with pies. Pumpkin and apple are absolute requirements, and although traditional mincemeat used to be part of the line-up, it disappeared after my Uncle Jack’s passing in 1988. My godsons, brothers Brian and Daniel, now in their 30s and with families of their own, always handle whipped cream preparation—heavy cream, sugar, and vanilla—and they turn it out perfectly every time, with just the right flavor and texture, combining the three ingredients with the precision of a couple of chemists.

Beginning in 1992, my cousin Kathy introduced us all to her renowned lemon meringue pies—and what a perfect palate-cleansing dessert that can be after a heavy meal! Sadly, Kathy is no longer with us, but her daughter remains an expert baker, and helps us to recall decades of culinary memories and a family connection that goes back to the days of the Civil War and when our sibling great-grandparents had just arrived in San Francisco.

After dinner is complete, we all relax, as the dishwasher churns away on the first of many loads. We sit back, with football highlights and some of Aunt Margaret’s Ray Coniff albums playing in the background, recalling the many years in the 1970s and 1980s when we all gathered at her apartment in the Stonestown Towers for this holiday. Once again, we pause and give thanks—for those who are here, for those who are no longer, and for those who are yet to share with us the many wonderful traditions that were developed over the decades in our beloved Outside Lands.