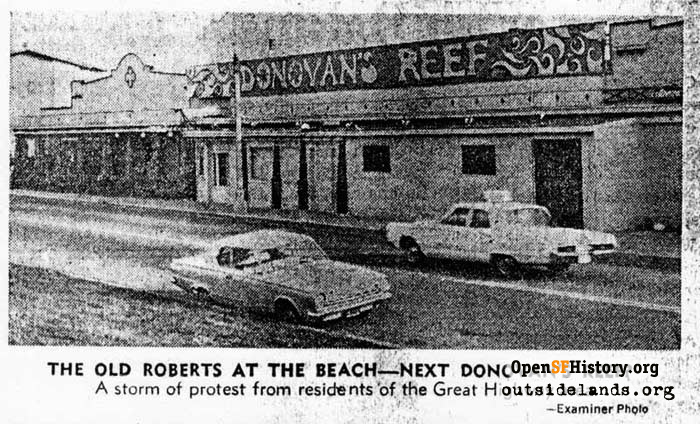 Streetwise - The Beat Goes On

Streetwise - The Beat Goes On

Residents of the Western Neighborhoods have long been involved in social groups that have supported the musical and performing arts. From the time of the Gold Rush through the Summer of Love and beyond, San Franciscans have long enjoyed music and dance.

The Jewish Community Center at California Street and Presidio Avenue has been sponsoring youth dances ever since the 1920s. In addition, the local community helped to support the classical music careers of both Isaac Stern and Yehudi Menuhin, who grew up in the city. In 1938, Rosalie Meyer Stern donated the land for Sigmund Stern Grove, and the Haas family helped organize the annual summer concert series there, while Bill Graham was the godfather of Bay Area rock music.

The Catholic Church began emphasizing "Teen Clubs" in the 1950s, automatically enrolling all graduates of the parish grammar school. These groups offered well-chaperoned dances on a regular basis, with various local bands providing the music. The Cecilian Club at St. Cecilia’s enjoyed great popularity in the 1960s, as did Holy Name’s club on Lawton Street, before being edged out by some others. St. Brendan’s near Portola Drive drew large crowds in the late 1960s, as did St. Stephen’s on Eucalyptus Drive. St. Edward’s on California Street had the distinction of having the best mix of people, since there was no grammar school in that parish—unlike other clubs, attendees there were assured that they would not be encountering only the same faces that had been around since Kindergarten.

St. Francis Episcopal Church, on Ocean Avenue near Junipero Serra Boulevard, organized a series of dances, known as "St. Francis Assemblies" in the 1960s, in an effort to provide neighborhood outreach. Like the other groups, parents had a strong sense of adequate supervision for teens attending these events.

The Richmond District was home to a unique phenomenon known as "car clubs"—social groups catering to teens, sometimes without cars, but called a car club just the same. Lucille Lando, a teen-oriented newspaper columnist in the 1960s and proud owner of a pink Thunderbird, helped to popularize these groups. Among them were The Leaders, The Hounds, The Gents, The Bachelors, The Lairds, The Vanahys, The Jokers, and others. There was no requirement for attendance at any particular high school, and many clubs had members from both public and Catholic schools. While the groups were mostly guys, some had female members, though none of the participants demonstrated any of the criminal inclinations suggested by Hollywood. In the words of one former member, now a certified senior citizen, “Forming a doo-wop quartet might take place, or joining a rec league for basketball or softball, but the idea of a gang rumble was not on our agenda. Tough-guy posturing, however, and wearing your club jacket, was standard operating procedure, and may have been interpreted as looking for trouble by outsiders.”

Public dance venues, such as Donovan’s Reef on Great Highway, managed to generate heated neighborhood opposition in the late 1960s—like nothing else imaginable, short of introducing a nuclear waste dump into the neighborhood. Donovan’s ultimately achieved a short-lived legal victory when the site quietly applied for and was granted a city license to operate a “dancing school.” (Read more in this article about the old Roberts-at-the-Beach roadhouse.) 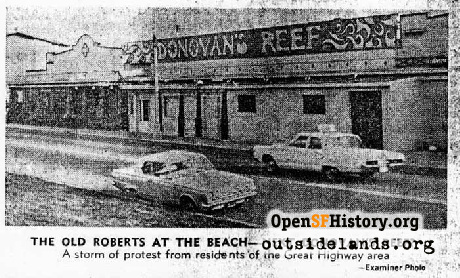 Face it—with all these possibilities, if you didn’t have a place to go on a Friday or Saturday night, it was your own fault.

Since dancing was the standard activity for most groups, organizers faced a perpetual quandary—how to make the gatherings enough fun for the participants, while assuring concerned parents that there was not “too much fun” taking place. Often, this involved cracking down on alcohol (later on drugs), while amping up the volume of the music to unprecedented levels in order to maintain a “convivial” atmosphere—at least until the neighbors began complaining.

Dance styles progressed from ballroom to bossa nova to more contemporary ("the Twist" in the 1960s) to rock. Yet, given the usual teen inclinations, boys tended to hang out together on one side of the auditorium, hands in pockets, while girls clustered on the other side, whispering to one another, and making multiple group forays to the ladies’ room. This social segregation did not lend itself well to dancing, and many participants ultimately rated these events as: B-O-R-I-N-G. Eventually, someone came up with the idea of ski trips, and the popularity of teen clubs suddenly surged, along with businesses that rented ski equipment in the Richmond and Sunset Districts. Music still played a large part, though, as participants all had their portable radios tuned to the latest hits on KYA, KFRC, and KEWB, making for a very long ride to the Sierras for the bus driver.

Over the years, the demand for live music helped to nurture many fledgling bands. Among the 1960s neighborhood groups were The Revelos (45th Avenue and Moraga Street), Wonder Bread (46th Avenue and Lawton Street), Nowhere Men (35th Avenue and Rivera Street), and Arizona Subway, later The Beans, and finally achieving fame as The Tubes (Noriega Street near 45th Avenue). Other groups included The Hedds, Benedict Arnold and the Traitors, Peter Wheat and the Bread Men, Beau Brummels, and Baytovens. 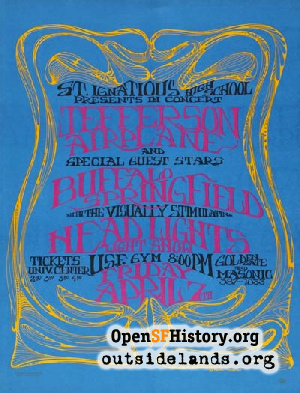 Poster from 1967 concert at University of San Francisco in support of St. Ignatius High School. -

As part of a long-running fund-raising effort for St. Ignatius High School's new Sunset District campus (over and above decades of candy bar and raffle ticket sales by students), the uber-trendy Jefferson Airplane and Buffalo Springfield groups were signed to perform in the University of San Francisco gym on April 7, 1967—something that had many parents a bit rattled. Playing back-up was a local group, The Vandals.

In 1969, Kanon, another local “garage band” based on 28th Avenue, was being considered to play at a Scottish Rite event. For their audition the band decided to play Henry Mancini’s Pink Panther theme—highly popular even before it became associated with an insulation product. As fate would have it, when the band walked the organizers back to their car, lo and behold, there was a large pink panther decal on the rear window. Kanon got the job.

In 1971, a group of students at St. Mary’s College in Moraga formed a musical ensemble named Butch Whacks and the Glass Packs, and local entertainment was never quite the same. Butch Whacks drew its members heavily from San Francisco's western neighborhoods: Bob Sarlatte (St. Cecilia/St. Ignatius alum), Craig Martin (President of his Presbyterian Church youth group, and also a St. Ignatius grad), Johnny “Broadway” Buick, (my classmate and friend from first grade through high school), Gary and Jerry Murphy, Karl Young, Michael “Mongo” Moore, Mike Haggerty, DeeDee Crockett, Bill Lazzaretti, Rob Birsinger, Julio and Bruce Lopez, Jeannine O’Neal, and many others. From a college band to an entertainment sensation, BWGP has been delighting crowds for 40+ years, with their doo-wop rhythm at regular “farewell concerts.” (http://www.butchwhacks.com/about.html). At founding member Johnny Buick’s 1989 funeral following a tragic accident, the group performed his favorite song, Surfer Girl—the first and only time those lyrics were ever sung in St. Cecilia’s Church—unbelievably, TWENTY-FIVE years ago this month—and there was not a dry eye in the house.

Cabaret singer Mary Cleere Haran, also born and raised in the western neighborhoods, and another of my grammar school classmates, was the second of eight children, her father a professor of theater and film at City College of San Francisco. An Irish step dancer from St. Cecilia and Star of the Sea Academy days, she was featured on the cover of AARP magazine in 2002 celebrating a “big” birthday. The caption read “50 Never Looked So Good,” and that was very true. She had been living in New York since the early 1970s, performing hits of Rodgers & Hart, the Gershwins, and many others in supper clubs, on stage, and in recordings, until her untimely death in a 2011 Florida bicycle accident when she was only 58 years old.

In addition to music and dance, many other well-known entertainment personalities have strong ties to the western neighborhoods. Later this year, we’ll be taking a look at some more famous neighborhood names, including many others who have shared the unfortunate trait of leaving this earth far too soon, long before one might expect. As we look back—sometimes on YouTube—at various performances by local celebrities, we reflect on their early years in our midst, and how that background set them on the path to accomplishments that have enriched us all.