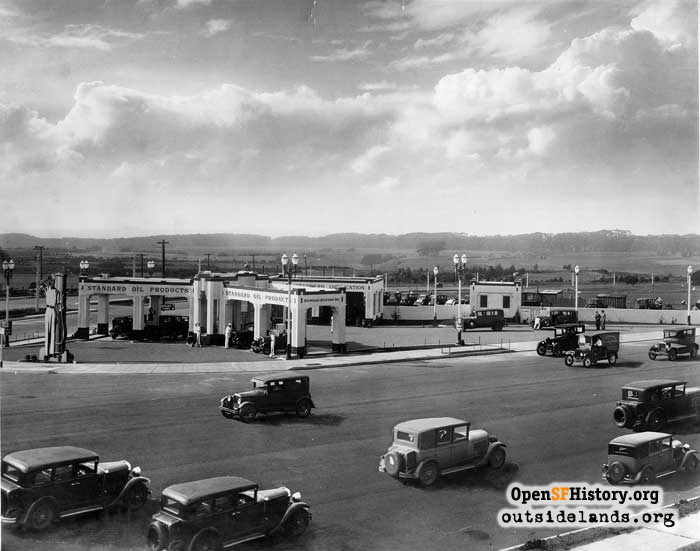 The rite of passage of getting a driver's license isn't what it once was.

There was no other rite of passage as fundamental to teenagers back in the 1960s as the acquisition of that very first driver’s license. From the middle years of elementary school, most of us Baby Boomers—boys in particular—clocked off each year’s birthday, beginning at about age 11, with an announcement along the lines of “only 4½ more years until I can get my learner’s permit.”

Invariably, though, some older person could be heard to cackle, “I hear that next year, it’s going up to age 18 for everybody.” In retrospect, one high school teacher in the late 1960s confided to the class that that he and his friends used to hear the very same threat spoken by their elders almost 20 years earlier—even before all of us were born, thus making that statement one of those great urban legends.

Over the years, however, most states, including California, have toughened up the rules a bit. A learner’s permit can still be issued to someone who is age 15½, provided that the applicant has completed 30 semester hours of an approved driver’s education course, plus parental approval. By contrast, in the fall of 1967, I spent only a few Saturday mornings at the old St. Ignatius high school auditorium on Stanyan Street, watching 16mm instructional films—the most gruesome of which was called Blood on the Highway—the very same one shown to friends who were attending Lincoln and Lowell high schools. The graphic images of full-color gore and mangled bodies were supposed to impress viewers with the grave consequences of poor judgment on the road, and they were highly effective. Over the years, several students—generally big, tough football player-types—had to run from the auditorium to the restroom, hands firmly clutching mouth shut. Today, of course, many of these instructional courses are available online, though without the highly memorable graphics.

Today, once a learner’s permit has been issued, the applicant must complete a professional driver’s training course, plus at least 50 hours of practice (with a minimum of 10 of those hours taking place at night), while accompanied by a licensed driver over the age of 25. Although I felt that I spent hundreds of hours with my Dad, driving aimlessly back and forth through Golden Gate Park—from the Panhandle all the way to Playland, and back again, and again—it was likely far less than today’s time requirement.

There were a few classmates in my generation who were literally at the doors of the Department of Motor Vehicles office at the stroke of 9:00 a.m. on the very morning of their 16th birthdays, but my folks aligned themselves with many other parents who took the “let’s-slow-this-down” approach to the whole matter. As a result, it was nearly six weeks after my 16th birthday when they finally agreed that I could take my driving test, and I chafed at each and every hour of the delay. 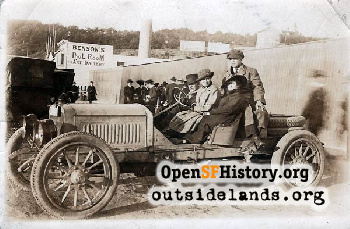 Postcard of auto in front of Benson's Pool Room and Art Gallery at Ocean Beach, 1910s. -

Unfortunately, by 1968, the Sunset District branch of the DMV, located for many years on Noriega Street near 21st Avenue, was closed, leaving only the Fell Street location for San Francisco residents. While the testers at Noriega had a reputation for “going easy” on applicants—taking them up and down the avenues and the quiet cross streets and never on 19th Avenue or Sunset Boulevard—the sadistic behavior of the Fell Street staff was the stuff of urban legend. They reportedly took applicants along traffic-choked one-way streets such as Fell and Oak Street, onto busy Masonic Avenue and Geary Boulevard, through tricky intersections like Masonic/Euclid/Presidio in Laurel Heights, and even onto the Central Freeway—or so the horror stories alleged.

Many high school students of the time believed these widespread rumors, and most of us opted to test at the seemingly more friendly Daly City office, adjacent to Westlake Shopping Center on Southgate Avenue near Park Plaza Drive. Maybe the Daly City staffers really were easier, or maybe not, but everyone I knew who tested at Westlake reported an easy drive through quiet residential streets with a few stops signs, little traffic, and then back to the office where they were told of their success. 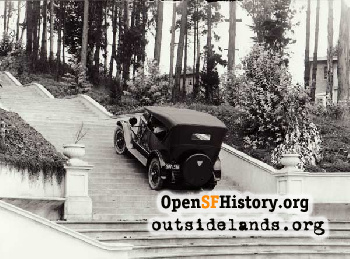 A 1923 Maxwell automobile shows off its power by climbing the Pacheco steps in Forest Hill. - WNP Collection

In the past, finally getting one’s driver’s license meant:

1) Going with a car full of friends to the Westlake A&W drive-in on the first available Friday night.

2) Taking one’s girlfriend to Lake Merced Circle (for Sunset District kids) or to the Palace of the Legion of Honor parking lot (for Richmond District kids).

3) Drag racing with others along Brotherhood Way or Great Highway (when it was four lanes in each direction and no traffic lights).

Now, however, the State of California has put an end to such festive recreational activities for the recently licensed. Effective in 2006, certain restrictions apply for drivers under the age of 18 during their first year holding a license. Among these limitations are: no passengers under 20 years of age at any time and no driving whatsoever between 11:00 p.m. and 5:00 a.m.—the only exception to these rules being the presence in the car of a licensed driver over the age of 25. While these rules clearly make sense to me today, they would have eliminated some perfectly innocent (and a few more questionable) good times back in 1968.

Once we were given all this freedom to navigate, what did we drive? Initially, most of us were behind the wheel of a nice, sedate Ford or Chevy sedan—or perhaps Mom’s station wagon. A couple of my high school classmates were fortunate enough to acquire an elderly grandparent’s car when the grandparent decided to give up driving. One friend found himself behind the wheel of a 1952 Buick—wide-bodied and complete with the so-called “snaggle-toothed” front grille. I drove it a couple of times, and it was a real chore maneuvering that big boat (no power steering) around through traffic. Another classmate inherited a 1955 Plymouth from his grandfather, and while easier to drive, it still handled like a Sherman tank. A couple of friends even acquired an “Unsafe at Any Speed” Chevrolet Corvair after Ralph Nader’s 1962 book caused the resale price of that particular car to plummet drastically. 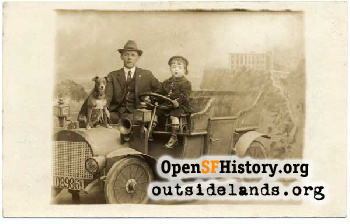 A typical first-buy vehicle for many Baby Boomers was a Volkswagen Beetle, new or used. It is no exaggeration to say that virtually every college student in the 1970s owned a VW at some point. You could see dozens of us, on Friday and Saturday nights, learning to maneuver a stick shift in the Stonestown parking lot near the Emporium department store. VWs were incredibly reliable and resilient, even though not the safest in accidents—raise your hand if you ever had a Beetle that you were driving or riding in—totaled in a crash. Such an outcome invariably led to parental demands to buy something “heavier and safer” the next time around, perhaps with some financial assistance.

Now, however, the tide seems to have turned. According to a recent USA Today article, the number of high school seniors who drive has dropped drastically. In an annual study of 15,000 students in 130 schools, both public and private, the proportion of seniors with a driver’s license fell from 85% in the mid-1990s to only 73% today—I suspect it was in excess of 98% when I was a senior back in 1970. Several studies have confirmed that young adults in their twenties are in no rush to get a driver’s license and to take on the expenses of a vehicle—purchase, maintenance, insurance, gasoline—when such an investment might sit idle for most of the day while its owner is working or sleeping.

Many more people nationwide are now relying on public transit to get themselves around, not just to and from work, but also for shopping and social activities, both day and night. Car sharing services are beginning to catch on, and many people who might lease a vehicle have informal arrangements for car sharing among a small group of family and friends.

Several months ago, I was out to dinner in the city with a group of friends, one of whom was doing the driving. I immediately noticed that many streetcars and buses were still picking up and dropping off large numbers of riders, even though it was after 8:00 p.m., and well past the evening commute. Could it be that the public is taking back the nighttime streets in San Francisco? Maybe this is just the start of a new trend—fewer driving-under-the-influence issues, increased pedestrian traffic after dark, safer streets, easier neighborhood parking in the Richmond and the Sunset, plus more evening activities for everyone.

We can only hope… 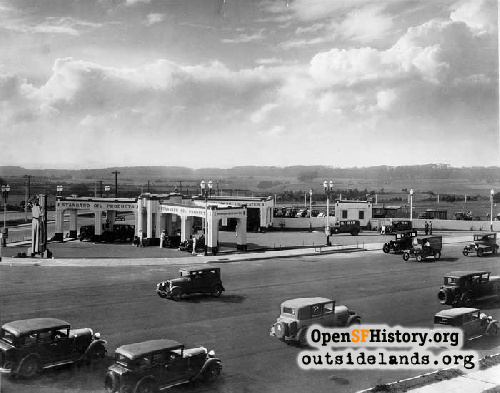