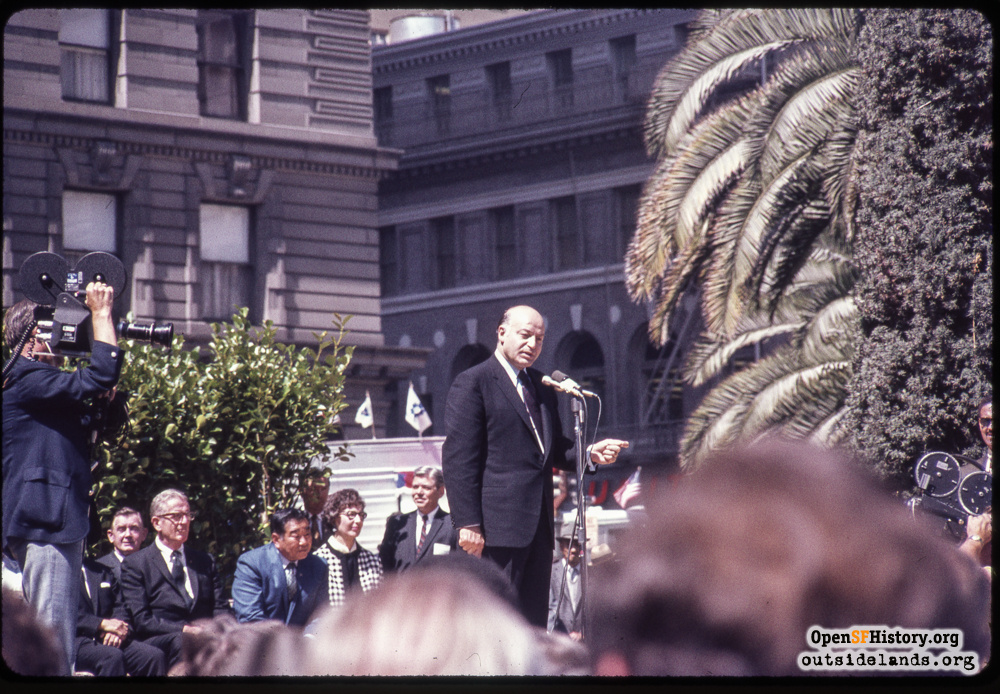 Streetwise: Gone But Not Forgotten

Local celebrities and personalities that San Franciscans had a wave and a smile for.

Streetwise - Gone But Not Forgotten

January is a time for reflection.

For those of us who experienced San Francisco in the second half of the twentieth century, many of the people who were once part of our daily lives are now gone—people we would likely recognize and perhaps wave a hello to if we passed them on a downtown street. Now, as they slip away, one-by-one, we may not notice the change at first, but one day we realize that the familiar city we once knew is now missing some of its most memorable residents.

Here is a short list that will evoke fond memories for many people. Note that in keeping with WNP’s new photo archive, I’m occasionally stepping just a bit outside the traditional boundaries of the western neighborhoods and into San Francisco at-large.

Joseph Alioto: Two-term mayor and Richmond District resident, first elected in November 1967, in a whirlwind campaign in which he went from finance chair of the McAteer for Mayor committee to candidate, following Gene McAteer’s untimely death on the handball court of the Olympic Club that May. With a charismatic style, Alioto managed to get things done, while simultaneously making everyone feel good about life in San Francisco. He later returned to the practice of law with his daughter Angela, but sadly, he died in January 1998. 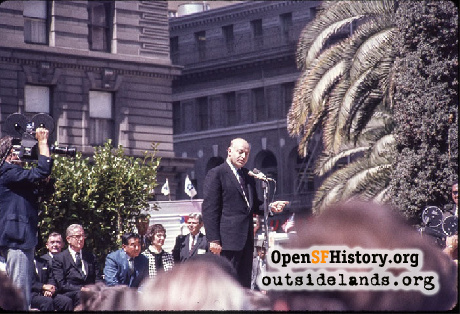 Ruth Asawa: California-born artist and long-time member of the city’s Arts Commission and trustee of the Fine Arts Museums, who created some of San Francisco’s most enduring pieces of public sculpture, including the mermaid fountain at Ghirardelli Square (1966), San Francisco scenes fountain at Hyatt-Union Square (1973), Buchanan Mall fountains in Japantown (1976), and the origami fountain on the Embarcadero (1986). In 2010, her name was given to the city’s School for the Arts public high school. She passed away in 2013, at age 87.

Harry Bridges: Australian-born head of the International Longshore and Warehouse Union for 40 years, he kept the Port of San Francisco thriving—with labor harmony, profits for ship owners, and excellent wages and benefits for union members, all the while supporting his beloved adopted town of San Francisco. Once, when questioned in court about his political affiliations, he responded, “How can I be a Communist—I’m a registered Republican.” He remained a vital image of San Francisco until his death in 1990, and several years later, the city named a plaza in his honor.

Marian and Vivian Brown: For more than 40 years, the blonde San Francisco identical twins walked miles through the downtown area each day in their perfectly-matched outfits, hairdos, and hats, posing with tourists for countless photos—the smiling faces of our city. The pair appeared on talk shows, in numerous TV commercials, and were regular guests of honor at civic celebrations. Vivian died in January of 2013, at age 85, and Marian in November of 2014 at age 87.

Herb Caen: Newspaper columnist since 1938 when he was a 22-year-old kid from Sacramento. For decades, many people began their workday began at the water cooler with, “Didja see what Caen said this morning?” Winner of a special Pulitzer Prize in April 1996 (which referred to him as the “voice and conscience” of San Francisco), Herb and his “loyal Royal” typewriter have been sadly silent since his passing on February 1, 1997, at age 80.

Children: The oft-repeated statistic that there are more dogs than children in San Francisco has been true for a decade. Figures released by the US Census Bureau indicate that only 114,230 persons of the city’s total population of 852,469 (13.4%) are under the age of 18 (2014 estimate)—far lower than the statewide number. The city’s Animal Care and Control Department indicates that, based on licensing figures since 2006, there are at least 120,000 dogs residing in San Francisco.

Department Store Salespeople: Surprisingly, there was a time (1980s and earlier) when this job represented a viable career for thousands of San Franciscans, with union wages, solid benefits, and the ability to progress into higher-paying positions, based on an ability to meet the needs of customers. Sadly, gone since the 1990s, and replaced by “cashiers.” 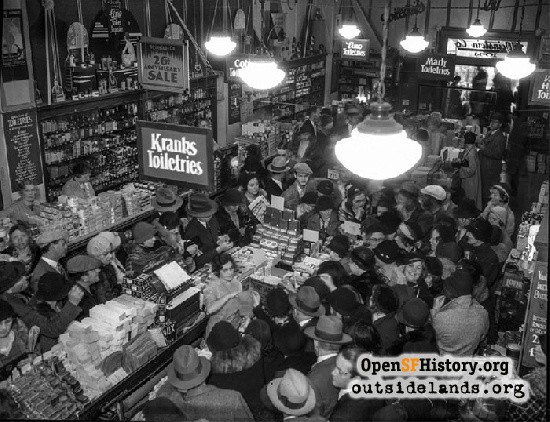 Joe DiMaggio: The former New York Yankee slugger spent many years living in his family’s home on Beach Street in the Marina District—the place that he had previously shared with his bride, Marilyn Monroe, following their January 1954 wedding at City Hall. Always low-key, he stood in line with thousands of his neighbors at Marina Middle School in 1989, following the Loma Prieta earthquake. In 1992, a children’s hospital was opened in Hollywood, Florida, his second home, after he raised and contributed more than $4 million. Following his 1999 death, New York City renamed the West Side Highway in his honor, and in 2012, the US Postal Service featured him on a postage stamp. His grave at Holy Cross Cemetery in Colma remains popular with visitors.

Carol Doda: Exotic dancer who made history in 1964, when she led North Beach entertainment clubs into the era of topless dancing. Born in Solano County in 1937, she grew up in San Francisco, where she lived the rest of her life. Careful to avoid the alcohol, drugs, and vice that impacted many other exotic dancers, she retired from the entertainment business years ago. She owned a small lingerie boutique and was generally known to be a very nice person, who passed away quietly from cancer in November 2015, at age 78.

Herbert & Mortimer Fleishhacker: Two brothers whose generosity to the people of San Francisco was unrivaled, both lived until the 1950s. Herbert’s gifts included a public swimming pool and what is now known as the San Francisco Zoo, while his brother was a major benefactor of the University of California, the San Francisco Opera, the San Francisco Symphony, and the Museum of Modern Art. Jointly, they built a magnificent “Mother’s Building” at the Zoo, which is currently unused, but which may be renovated. (See this SF West History Minute) 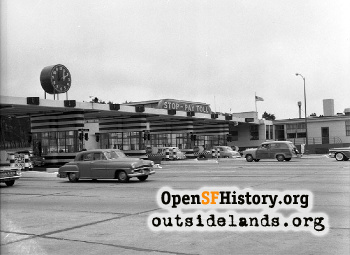 Willie B. Kennedy: A long-time executive in the retail business, Mrs. Kennedy and her husband, Judge Joseph Kennedy, one of San Francisco’s first African-American judges, lived on Miraloma Drive on Mount Davidson for many years. Long-widowed, she was appointed to an open seat on the Board of Supervisors in 1981, and remained there for 15 years (exempt from term limits because she was on the Board prior to that law), after which she remained an active advocate for all San Franciscans by serving on several other civic groups, and providing a City Hall presence at thousands of dedications and ribbon-cutting events across town. Just before her passing in 2013, at the time of her 90th birthday, she helped turn the first shovel of earth at a new housing project at the site of the old Hunters Point Naval Shipyard.

Cyril Magnin: San Francisco-born merchant, educated at Lowell High School and UC-Berkeley, was the long-time president of Joseph Magnin, a popular women’s clothing store. From 1964-88, he was San Francisco’s Chief of Protocol, and nicknamed “Mr. San Francisco” by Herb Caen himself, while also serving as president of the San Francisco Chamber of Commerce. He was a powerful Democratic political fund-raiser, and in 1979, he was cast in a mystery/thriller film as a Pope. Following his 1988 death at age 89, a two-block stretch of Fifth Street North, between Market and O’Farrell Streets, was renamed in his honor.

Harvey Milk: The first openly gay elected official in the United States once owned a small camera shop on Castro Street. He became politically active in the early 1970s, and ran for political office three times before his election victory to the Board of Supervisors in November 1977. His election marked a sea change in city politics, and his assassination at age 48, just one year later, along with George Moscone, sparked widespread national outrage. Today, his name appears on a K-5 elementary school in San Francisco, a city plaza at Market and Castro Streets, a restaurant at 18th and Castro Streets, a San Francisco Democratic Club, and a New York City high school. In 2009, he was posthumously awarded the Presidential Medal of Freedom.

Neighborhood Pharmacists: Whether it was Bowerman’s at Ocean Avenue and Junipero Serra Boulevards, Reis’ at 18th Avenue and Taraval Street, Conlon’s at 32nd Avenue and Noriega Street, or Wakelee’s on Clement Street near 7th Avenue, San Francisco’s western neighborhoods used to be dotted with small Mom and Pop businesses run by pharmacists serving the needs of their local communities. You knew them, they knew you, and their stores were an important part of the village atmosphere that we all loved so well. 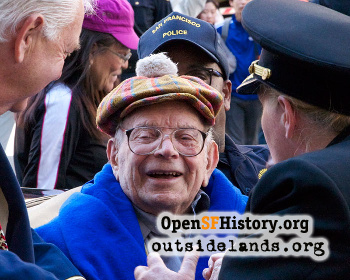 Bill Del Monte: William Del Monte, believed to be the last living survivor of the 1906 San Francisco earthquake and fire, died just this month, three days short of his 110th birthday. "Uncle Bill" was only three months old when his family’s home at Broadway and Kearny Streets was lost to the fire.

Jack Rosenbaum: A 1925 graduate of Polytechnic High School, and long-time Sunset District resident, he was a newspaper reporter from the days when San Francisco had five dailies vying with each other: Bulletin, Call, Chronicle, Examiner, News. Rosenbaum wrote for each of those papers (except the Chronicle), plus the Independent and the Progress, as his brother Art spent 60 years writing sports for the Chron. After writing more than 10,000 Herb Caen-like columns—but without the harsher edge that marked some of Caen’s entries—Rosenbaum, universally regarded as a “nice guy” in a tough business, retired in 1996 at age 89, and died in 2007, at age 100.

Alma de Bretteville Spreckels: The grand dame of San Francisco society was born on her parents’ farm, somewhere in the vast sand dunes that stretched between the corner of Junipero Serra Boulevard and Ocean Avenue and the shores of Lake Merced. After the death of her older husband, sugar magnate Adolph Spreckels, she raised her children and contributed generously to the people of San Francisco by building the Palace of the Legion of Honor Museum and stocking it with priceless works of art that she had collected over the years. Mrs. Spreckels died in 1968, at age 87.

Bill Walsh: Hired as head coach of the San Francisco 49ers in 1979, he began the transformation of a team that had a 2—14 record the year before his arrival and again in his first year as coach. Under his leadership, the team won its first championship in Super Bowl XVI against the Cincinnati Bengals, mere two years after winning only two games, and went on to further Super Bowl championships in 1984 and 1988 while he was head coach. Following the 49er victory in Super Bowl XXIII, Walsh became a broadcaster for NBC, later returned to Stanford as head coach in 1992, and retired from coaching in 1994. He was then Vice-President and General Manager of the 49ers from 1999-2001, and consultant until 2004. He died from leukemia in 2007, and the playing field at the now-gone Candlestick Park was named in his honor.

Chuck Williams: His purchase of a small country hardware store in the town of Sonoma in the 1950s changed the food world forever. Introducing some of the products that he had seen on his travels during and after World War II, he introduced cooks in the United States to culinary wonders from around the world. Expanding to San Francisco’s Sutter Street in 1958, the company continued to grow because of its reputation for innovation and excellent customer service. A catalog was introduced in the 1970s, and Williams eventually sold the company to a group of investors, though he continued on as Founder and Chairman Emeritus of an organization that today boasts more than 600 stores. He remained active, still editing cookbooks published by the firm, until just before his passing at age 100 in December 2015.