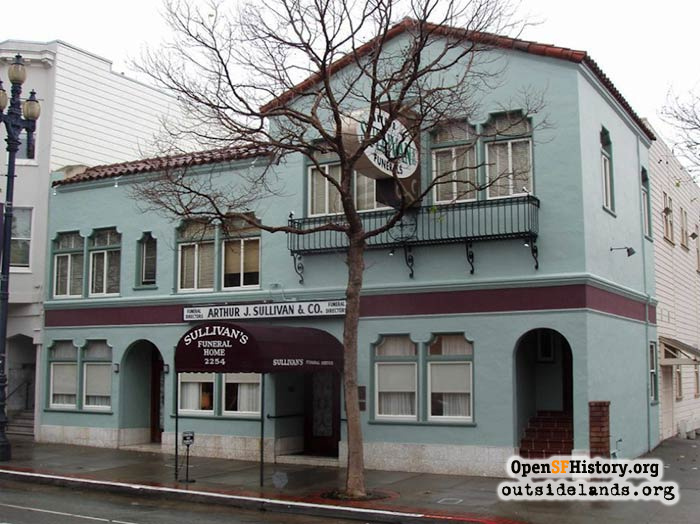 Streetwise: Final Services Will Be Held

Streetwise - Final Services Will Be Held

It’s not too often that a family business manages to thrive for three full generations, while still making meaningful contributions to the community. Sometimes a company will fail to keep pace with changing times (buggy-whip manufacturing or telephone answering services, as examples), while in other cases, operations may be moved to another country for the purposes of reducing taxes and/or production costs (such as manufacturers of everything from clothing to food products to automobiles).

However, one business, owned by a family with deep roots in the western neighborhoods of San Francisco, has been in place for 92 years now, quietly serving the needs of the community—Arthur J. Sullivan Funeral Directors. But if you wish to avail yourself of their services, time is short—the business will disappear this month, with its Upper Market Street space replaced by a condo-retail complex. 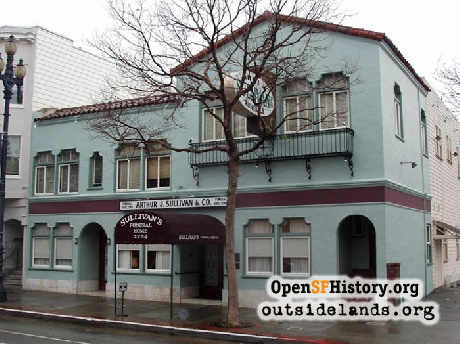 Please do not blame changing times, though—it is not a story involving techie takeovers or unscrupulous landlords. The current generation of Sullivans—brothers Arthur III and Jim—are both well past the usual age for retirement, and the younger generations of the family are not interested in taking over daily management duties.

The business began in the years just after the end of World War I, when the original Arthur J. Sullivan, who lived with his family near the southeastern corner of Golden Gate Park, went into business with his brother Alfred at 2254 Market Street, with the sign reading “Arthur J. Sullivan, Undertakers.” Over time, the original Arthur took over the business on his own, and the sign morphed into the industry’s new standard moniker, “Funeral Directors.”

In that era death was, sadly, a regular visitor to most households. The lack of antibiotics and preventative medical treatments and diagnostic testing took many San Franciscans to an early grave. Childbirth was the largest single cause of death among otherwise healthy young women. Today—when anyone who dies at less than age 90 is said to have “gone so soon”—it is difficult to imagine the frequency of funerals involving younger people who were often in the prime of their lives.

San Francisco was dotted with funeral establishments in the 1920s, with more than 50 listings in each annual edition of the City Directory for that era. Services were just beginning to be held outside the home, and various establishments were striving to provide a “homey” atmosphere for pre-funeral visitation and for the service itself if the family was not planning to have a church service.

This was also a time when the automobile was a comparative rarity in many households, so undertaking parlors tended to be conveniently located in virtually every San Francisco neighborhood in order to provide easy access for mourners. (These business were also located with easy access to neighborhood bars—often on the opposite corner—but that’s a Streetwise story for another time.) Many firms in the 1920s had horse-drawn hearses and the public transit system even offered electric streetcars specifically for funerals that ran to the Colma cemeteries via Mission Street and the center median of El Camino Real. Firms like Sullivan’s were among the first to introduce that new amenity—the automobile—for transporting both the casket and the mourners.

In the old days, this was a trade that maintained a regular clientele, with families returning again and again to the same firm in times of need. Jewish families generally sought out the services of Sinai Memorial Chapel, while most Italian families gravitated to Valente-Marini-Perata. The once-large San Francisco Irish community had split loyalties, with many favoring the old firm of Carew & English, located for years at Masonic and Golden Gate Avenues. The Mission District was home to several establishments—Duggan’s, Driscoll’s, Reilly Company/Goodwin & Scannell—while the Richmond District had McAvoy & O’Hara at 10th Avenue and Geary Boulevard. Sunset District residents of an earlier era might choose from Hogan & Sullivan on 9th Avenue or Currivan’s Chapel of the Sunset on Irving Street. Arthur J. Sullivan, with its central location on Market Street, was known to many people citywide.

Gradually, consolidations began to occur and many firms vanished over time. Some of those still in business, such as Halsted & Co. on Sutter Street, are an amalgam of many different firms with deep roots in San Francisco history. A sign at Halsted’s indicates that their firm has absorbed N. Gray (a Gold Rush-era coffin maker that survived well into the twentieth century), Carew & English, Gantner-Felder-Kenny (previously at Market and Duboce Streets), Gantner-Maison-Domergue, H.F. Suhr Company, Godeau Funeral Home, Martin & Brown Funeral Directors, and Quock Fook Sang Mortuary. Some of the Halsted records go back to N. Gray’s services, with transactions dating from the 1850s. 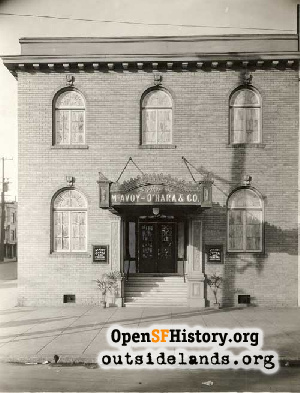 Former building of McAvoy-O'Hara Mortuary on the northeast corner of Geary Boulevard and 9th Avenue, 1920s. -

Even into the relatively modern 1950s and 1960s, funerals were often enormous events because many individuals died at relatively young ages, still in their working years and with many friends and relatives still living in San Francisco. Sullivan’s experienced congestion in their small parking lot in those days, and the family member in charge at the time, Arthur J. Sullivan, Jr., a life-long Sunset District resident, wisely purchased a dilapidated old structure facing 16th Street, had it demolished, and created a larger lot to accommodate the constant stream of cars bringing mourners to the establishment each day and night for “visitation.”

During the onset of the AIDS epidemic in the early 1980s, Sullivan’s was recognized by the San Francisco Department of Health as being one of the only funeral establishments that would provide funeral services to victims. The Sullivan family has long been known for possessing generous quantities of both common sense and compassion.

In 1986, second-generation family member, Arthur Jr. passed away, and his wife Catherine took over the helm, overseeing the work of her two sons, Arthur III and Jim (one living in the Parkside and the other near West Portal). The business changed with the times, as the brothers noted that more and more local residents were opting for simpler funerals, often with cremation instead of open-casket viewing. Changing migration patterns, particularly among their largely Irish-Catholic clientele, meant that many families who once availed themselves of Sullivan’s services were no longer residing locally. Nearly a decade ago, Sullivan’s completed a merger agreement with Duggan’s Serra Mortuary, another firm with deep roots in the San Francisco community, thus setting the groundwork for the current transition.

It’s interesting to note that within the western neighborhoods of San Francisco, many Moms of baby boomers used to share a wry expression among themselves that defined their personal wishes for remaining at home and aging in place as they grew older. Most widows, dozens and dozens of them regularly announced to family and friends—this writer’s own mother included—that “the only person who will ever get me out of my house is Arthur J. Sullivan—and that will be feet-first.” We boomers generally tried to abide by such strongly-held wishes.

Now, the final two Sullivan brothers are about to embark on well-deserved retirements, and the Duggan family, with its younger generations still moving into management positions within their family-owned firm, will be taking over completely. The Market Street building is slated to become retail space, while the large adjacent parking area will see the construction of housing units.

I’ll likely wander through that new space whenever some future retailer sets up shop, just for a final look at the spot where our family once said good-bye to so many loved ones.

Thanks again to the Sullivan Family for 92 years of loyal service to San Francisco.