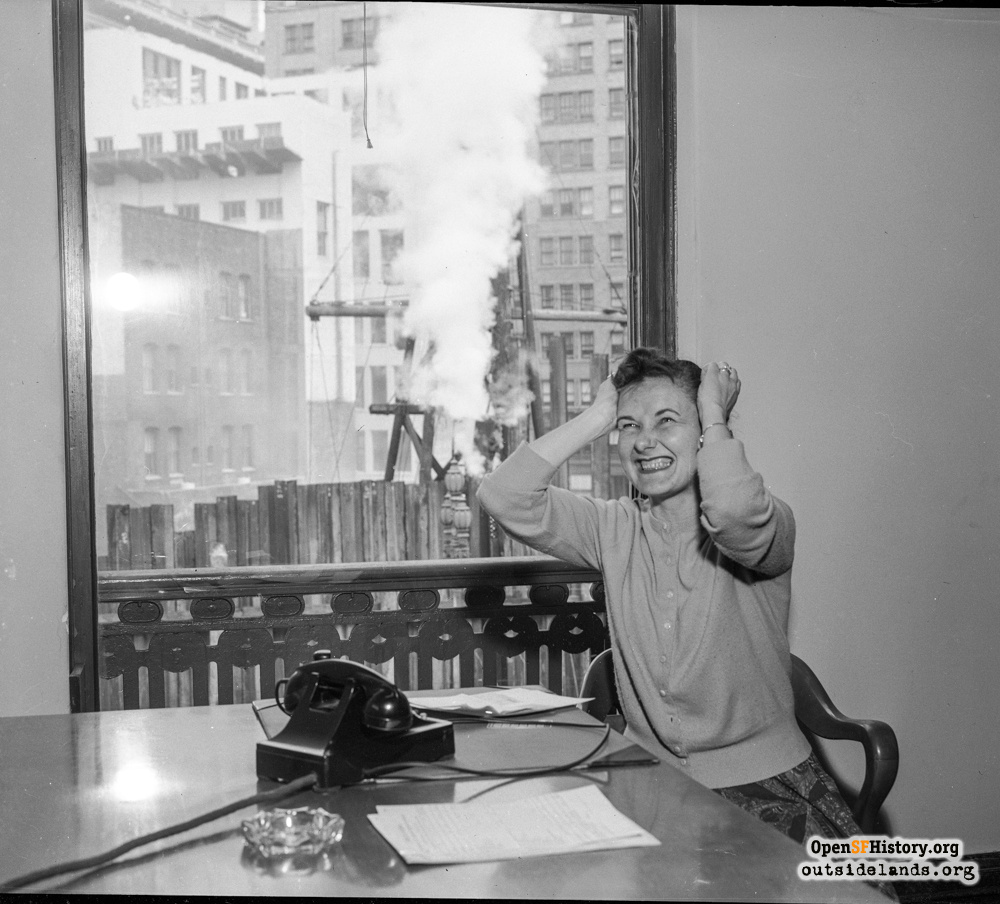 What was your very first “real” job in San Francisco?

Not mowing lawns or watching your neighbor’s kids or delivering the Shopping News, and not the summer you spent scooping ice cream at Shaw’s on West Portal or dipping frozen bananas into chocolate sauce at Playland or waiting tables at Zim’s while attending college—but your very first full-time, pay-the-rent/buy-the-groceries job you had as a young adult? Back in the late 1960s/early 1970s, downtown San Francisco offered a variety of work place choices, even for inexperienced young people who were polite, punctual, and presentably dressed.

For many Baby Boomers, that first real involvement in the labor force might have come in a downtown office, filled with faceless co-workers, all lined up at desks stretching out, row after row into infinity, surrounded by walls of filing cabinets. Perhaps it involved processing payments, answering telephones, typing forms, responding to customer inquiries and complaints, or simply filing endless streams of index cards or paper forms. In the days when computers were still a back-room operation, it might have included researching microfilm reels (updated daily) of the information contained in computer print-outs. The whirring of film back and forth in the readers, along with the constant ringing of telephones, clattering of IBM Selectric typewriters and mechanical adding machines, plus the deafening slams of steel file cabinet drawers were often far louder than the piped-in music that some offices began introducing at the time. 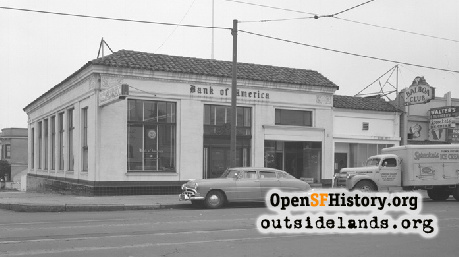 Before the wave of mergers, banks in general—Bank of America, Wells Fargo, Crocker, United California, Hibernia, and Security-Pacific—were among San Francisco’s biggest businesses—and they employed tens of thousands. Bank of America’s need for additional staff to handle Travelers Cheque inquiries during that product’s peak season neatly corresponded with summer vacation for hundreds of college students each year—a perfect match that often evolved into a banking career. With little prior experience, many of us found that these institutions were willing to take a chance with younger, less experienced employees like ourselves because of the rapid growth of branches and data centers. Coincidentally, just as our generation came of age, computers and easy consumer credit were coming to the forefront of the business world, and most places needed additional staffing to deal with it all.

During most of the last century, San Francisco’s retail life revolved around department stores, such as the Emporium, Hale’s, and J.C. Penney on Market Street. Before online commerce and stores like Costco, Walmart, and Target came onto the scene, a streetcar ride downtown was the way that most of us shopped for everything more durable than groceries. Founded in 1896, the Emporium achieved a solid 99-year run before it finally breathed its last in 1995, employing tens of thousands of San Franciscans over its long life.

For many of us, life in retail was actually very similar to some of the story lines depicted by the 1970s British sitcom Are You Being Served? with a clear social pecking order being played out behind each counter, mostly determined by seniority. Just as in the television program, sales staff sometimes considered themselves superior to merchandise handlers (though in many unionized settings in San Francisco, the merchandise handlers earned a significantly higher hourly rate for their work), and first-line managers often found themselves resolving intramural squabbles among bickering employees. “Christmas hires” often bore the brunt of the worst hours and assignments—“it’s your job to straighten out all the hangers”—and everyone breathed a sigh of relief when the holly and tinsel came down, and life returned to its normal pace.

For decades, retail stores had certain annual rituals, including January and August “white sales” on linens, plus springtime events (Emporium at Stonestown used to have incubators of chicken eggs, scheduled to begin hatching in the final few days before Easter), back-to-school, and Christmas activities. For youngsters, one of the most important December events in San Francisco involved roof rides and visiting Santa at the downtown Emporium—a “must-see” for every child of the 1950s and 1960s. It was only after World War II when many stores began to open suburban branches that the whole experience of “getting dressed up to go downtown” began to diminish—though Emporium wisely duplicated roof rides at their Stonestown store for many years.

Utility companies such as AT&T/PT&T and PG&E were often considered to be bastions of solid employment and secure retirement for generations of my relatives, and these companies offered solid career opportunities to women and minorities long before some other businesses did so. The job of PBX operator—private branch exchange switchboard—was a highly marketable skill that could be used virtually anywhere. Likewise, San Francisco was home base to multiple insurance companies such as the Equitable, Royal Globe, Fireman’s Fund, and others. All of them employed tens of thousands of residents to sell policies, collect payments, respond to customer inquiries, and process claims, offering entry-level positions that regularly lead to steady career progression. 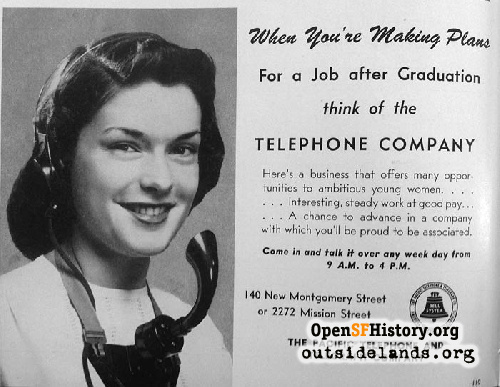 Government work—at the federal, state, or local level—has long been regarded as a smooth career path, with steadily rising wages, excellent benefits, and a predictable retirement income from a stable source—i.e. the taxpayer. Particularly in San Francisco, with its large numbers of school-age children—over 25% of the population back in 1960—school teachers, librarians, and support staff were constantly in demand and were also well compensated in both salary and benefits.

Even the most humble position, such as gas station attendant, used to exist in abundance, when service stations were lined up, one after another, along West Portal Avenue, Taraval Street, and Geary Boulevard.

Operating a small business used to be very popular in San Francisco, and is currently on the upswing, as the vast majority of today’s local businesses employ fewer than 100 people. Just figure out what was needed in a neighborhood—such as Herb’s Deli, Baronial Bakery, Pinto’s Barbershop, Tip-Top Shoe Repair, Gillon Lumber, El Sombrero Restaurant—and in a short time, you would have a steady clientele returning regularly, sometimes for generations. It’s a bit trickier today, as the City of San Francisco’s website for small businesses advises that a minimum of FIVE licenses or permits are now required to open something as simple as a sandwich shop—even more if the place plans to offer seating or sell any type of alcoholic beverage. However, new delis, cafés and bakeries are emerging all the time, often combined with an adjacent city “parklet” along the shopping streets of Clement, Balboa, Irving, Noriega, or Taraval, thus providing the customer with a relaxing place to sit and enjoy the neighborhood experience. 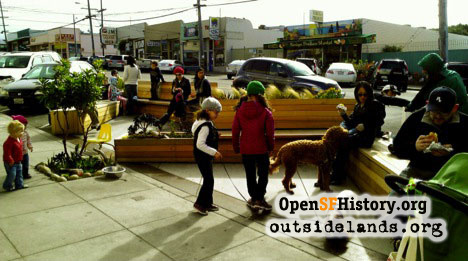 Having graduated from St. Ignatius High School, further education was a given, and virtually all of my 200+ high school classmates were college-bound. Many knew that they were headed for a career in medicine or law, and their choices were pretty straight forward, but a sizeable number of us remained “undecided Liberal Arts” majors for a long time. Almost without exception, though, those who opted for positions with the San Francisco Police or Fire Departments—with or without a four-year degree—seem to have achieved economic stability and comfortable retirements long before the rest of us. S.I.’s alumni magazine recently noted that fourteen of my classmates from 1970 had spent their careers with the SFFD.

Today, tech skills are highly prized, and are often more important than academic achievements. With recent favorable tax incentives provided by local government, several firms are now beginning to look at moving some of their operations north from Silicon Valley and doing business locally, where many of their employees actually live, thus increasing the variety of local job opportunities.

Most of us wonder “what if…” at some point in our careers, how things might have been different, based on our chosen path. In the mid-1980s, one of my older coworkers at Bank of America philosophized about what he would have done if he had not joined the bank’s management training program upon his return from World War II in 1946: “Should’ve listened to my old man and become a plumber or an electrician—when your toilet’s not working or the lights go out, you’ll pay a pro anything to get that kind of stuff fixed!”

Of course, once we all had our perfect 1970s job, there was the issue of finding that first home of our own in San Francisco—but that remains a topic for a future column.