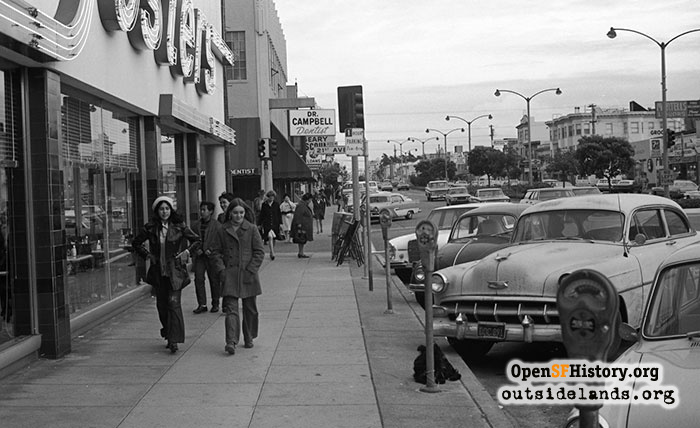 Getting your first place in 1970s San Francisco.

A few months ago, we looked at “first real jobs” that many of us had in San Francisco back in the 1970s, and now, we’re going to take a look at how we lived and relaxed away from work once we were first out on our own.

Hang on for some interesting then/now comparisons.

Until the mid-1970s, San Francisco rents were moderate enough that many young people could afford a place of their own. Back then, many downtown office workers seemed to gravitate to the west side of San Francisco when looking for a place to live. The Marina was a place for older Italian families, Noe Valley was still a blue-collar enclave, and today’s newly-trending areas—South Beach, the Mission, the Excelsior, Bernal Heights, Dogpatch—weren’t even on the radar of most people. The whole notion of employer-sponsored commute buses running from San Francisco to Santa Clara County was unthinkable at that time. In those pre-craigslist days, would-be renters often focused on the Inner Sunset and the entire Richmond District while poring over the San Francisco Chronicle’s real estate listings with their morning coffee and the Herb Caen column.

That was how I found my first apartment at Parkmerced in 1976. As a recent college grad who had just begun working full-time as a Claims Adjuster at Bank of America making $800 a month, my rent was $200, or one-quarter of my gross salary—a standard ratio in those days. Parking, water, gas, and garbage collection were all included, leaving me with just a telephone and an electric bill each month—no Internet, cell phones, smart phones, texting, laptops, GPS devices, Kindle readers, or streaming videos—not even a countertop microwave back in those days. Since it was a bit of a hike to the M-Oceanview streetcar or a wait for the 17-Parkmerced bus to West Portal, I often drove to work (at a time when parking downtown cost me exactly $25 per month—just over $1 per workday). Life was good, and with an extra part-time job, I actually managed to save a bit every month.

One college friend was renting a small in-law apartment at the back of the garage in a Richmond District home on 42nd Avenue, complete with a miniature kitchen and bathroom, at a very reasonable rent—far less than mine. There was a problem with smells drifting upward, though, and any time the cooking involved spices stronger than salt and pepper, the landlady was knocking on the door complaining. Likewise, any shower lasting longer than just a few minutes managed to deplete the capacity of the home’s ancient hot water heater. The unit, directly below the landlady’s bedroom, also amplified the sound of her incessant snoring, and when she watched the evening news without her hearing aids, every word spoken by Walter Cronkite was clearly audible in the downstairs unit. My friend quickly realized why the rent was so low on this “great” place.

Couples who married shortly after college graduation in the mid-1970s often seemed to settle near Irving Street in the Inner Sunset. Parking was a regular challenge whenever they had friends over, and invariably, some of the nosier neighbors tended to comment on what had been seen in the trash—“My, Stouffer’s for dinner a lot this week…” to the point that most of these newlyweds wanted to move on to something else very quickly. 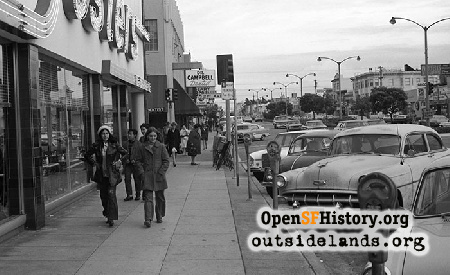 Another friend rented a large studio on California Street near Arguello, which gave her a variety of easy MUNI options for getting into downtown. As gasoline prices began to soar in the late 1970s, though, the 1-California, 2-Clement, and 38-Geary all became so overcrowded with riders who were leaving their cars at home, that the buses were regularly bypassing her and other waiting morning passengers because they were over-capacity before ever reaching her stop at Arguello. After several morning hikes to catch the 31-Balboa or the old 5-McAllister on Fulton, my friend began searching for a new apartment closer to the beach so that she would be assured of a seat every morning.

During those same years, one former classmate found a great, though pricey, studio apartment on the north side of Twin Peaks, yet the more costly rent was offset by the fact that he could walk to work near University of San Francisco. It was an easy downhill stroll getting there, though the trip home was significantly harder—all uphill, and with several flights of both exterior and interior stairs before reaching the tiny apartment itself. The place had a spectacular view, though visitors often felt like mountain goats struggling up an Alpine incline, and many of his guests gave up long before getting there, since the nearest parking spot was often at one of the public garages near UC Medical Center.

For most baby boomers, the roommate situation—fraught with peril both then and now—was always a fall-back position to be avoided if possible. In the past, typical complaints about roomies involved messiness, cigarette smoking, or a blaring TV or stereo when others were trying to sleep. Chronicle articles over the last decade or so have highlighted a whole new series of “roommate-from-hell” issues: sharing a studio apartment with nothing more than a curtain dividing the sleeping areas, or roommates running a methamphetamine lab in the kitchen, cultivating marijuana in a closet, operating a house of prostitution in their bedroom, or manufacturing fireworks in the garage (these last few issues apparently being “new” problems in the once-tranquil Sunset District).

For many renters, if things did not work out, they could always move—and "For Rent" signs were once a certain sign of spring in San Francisco. Since 1979, San Francisco’s rent control ordinance has helped many people maintain some affordability in housing, though the downside comes when someone decides that it’s time to move, but cannot afford to give up a rent-controlled unit and take a chance on what the current market has to offer. 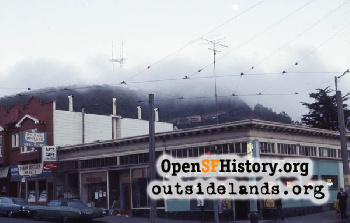 Once MUNI’s Market Street subway began operation in 1980, more people began selecting a place to live that was near a streetcar line, thus increasing the popularity of Cole Valley. This invariably led to the same problems experienced by my friend on California Street. After my move from Parkmerced to the Sunset in 1979, I sometimes got onto the N-Judah at 22nd Avenue on a weekday morning, though from 9th and Judah Street, all the way to the Duboce Tunnel entrance at Cole and Carl Streets, waiting passengers were being passed up because the streetcar was packed to the rafters.

Then there were home furnishings—another area where boomers exhibited a strong sense of thrift. Almost all of us had a table-and-chair set that had been relegated to our parents’ basements decades earlier. Whether wood or Formica, these items had seen long, hard years of use, and now they were our standard place for meals, board games, typing grad school term papers, and places to hang out with friends.

Another item in every single 1970s boomer apartment was the “cinderblock-and-plywood” bookcase, often dressed up with wood-grain contact paper on the shelves. These graced thousands of living rooms, at least until marriage, when a new spouse declared, “Those have got to go…” Old textbooks (remember the Norton Anthologies of English Literature?) and paperback novels filled the shelves, along with rows of vinyl record albums in their covers, all standing on end. In those days, a Sony Trinitron TV and a stereo receiver with turntable and movable speakers made up all the electronics in the home. A Smith-Corona portable electric typewriter constituted the “home office” and a rubber plant in the bookcase or a hanging fern in the window rounded out the décor.

Mismatched plates and glasses from the kitchen of a deceased grandparent were standard for early kitchens, though sturdy oversized mugs from Cost Plus were the choice for morning coffee, rather than tiny cups and saucers. And no matter how scruffy the juice glasses, most of us had a couple of nice matching wine glasses to grace the dinner table when serving the Carlo Rossi jug wine that had to be kept under the sink because of the large size of its gallon bottle. Pots and pans were often of the mismatched variety, but there was always a large Pyrex baking dish and an enormous round serving bowl for the inevitable lasagna or spaghetti dinners shared with family and friends.

Grocery shopping in those days might have found us at one of the older, smaller 1950s-era Safeway stores of the era or else one of the many small neighborhood grocery stores that still dotted the western half of San Francisco—Pine Lake Market on Vicente Street, Carriage Market on Noriega Street, Sunset Super on Irving Street, Lick Supermarket on 6th Avenue in the Richmond, Sutro Super on Point Lobos Avenue in the Outer Richmond—you just had to remember when the weekend was approaching, since most of these places were usually closed on Sundays. There was nothing resembling Costco, Walmart, Sam’s Club or Trader Joe’s for groceries, and those tiny apartment-size refrigerators necessitated food shopping every few days. 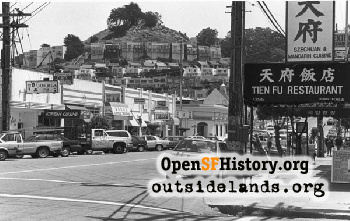 Sutro Baths, Fleishhacker Pool, and Playland all disappeared between 1966 and 1972, yet there were still many low-cost local entertainment options in the mid-1970s. The Alexandria, Bridge, Coronet, Coliseum, El Rey, Parkside, and Surf theaters were still in operation, along with the Mission and Geneva Drive-Ins just over the line in San Mateo County. Date night at any of these places, snacks included, might cost about $5 per couple. Front Room Pizza on Clement Street still featured 10¢ beer one night a week. The Hot House was operating at 40th Avenue and Balboa Street, plus Tien Fu at 21st Avenue and Noriega, and Zim’s locations still dotted the city for late-night eats. Many rock music venues were also still in business in those days, and even a couple of tickets to a Giants’ home game at Candlestick Park on a Saturday afternoon, plus snacks, would yield change from a $10 bill. The iconic S.N.A.C.K. (Students Need Athletics, Culture, and Kicks) concert, organized for March 1975 in support of public school programs, offered music in Golden Gate Park by the Doobie Brothers, Jefferson Starship, Jerry Garcia, Joan Baez, Tower of Power, Neal Young, and others for a mere $5 advance purchase.

Many of us had cars in those days, and the western part of the city was dotted with Volkswagen Beetles (which fit nicely between neighboring driveways), though Toyota was beginning to make inroads with its new Corolla and Celica models—many of them sporting a crooked “Toyota” decal on the rear window. Gasoline began to creep up in price after the 1973 Arab oil embargo, and it was not unheard of to see prices beyond 50¢ a gallon, though the $1 per gallon mark was generally not breached until mid-1979.

Today, many of us who grew up in the western neighborhoods, or who lived there in our early adult years, have now settled elsewhere for a variety of good and logical reasons involving family, careers, and relative cost. It’s easy to remember, though, when we had so many long-time friends and relatives as neighbors, when entertainment and dining out was varied and inexpensive, and when local merchants greeted us warmly as we ran our weekly errands. Just like the days of our childhood, the early adult years were also a golden time for many of us—not soon to be forgotten.