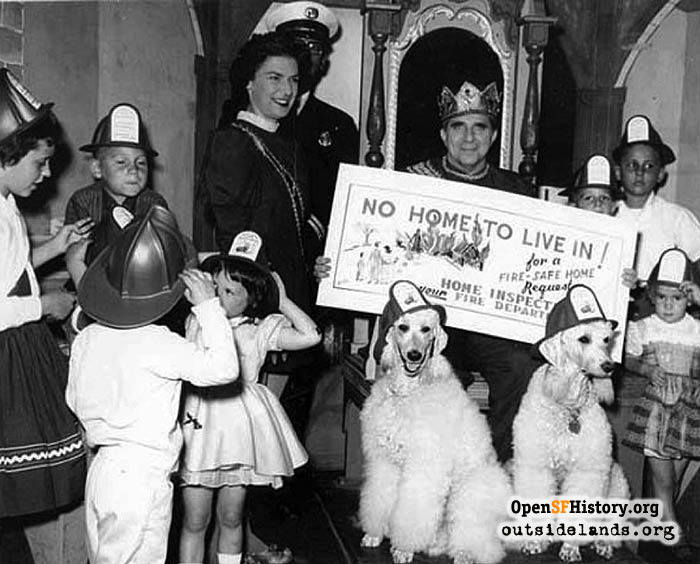 Remembering King Norman and his kingdom of toys.

Yes, we had an Emperor Norton—and for many Americans, Elvis will always be considered King—but for San Franciscans born in the late 1940s through the 1950s, the most famous royal of all was the one who presided over a far-flung kingdom of toy stores from his throne at 8th Avenue and Clement Street in the Richmond District.

Beginning in 1949, King Norman (also known as Norman Rosenberg) and his wife Doris identified the beginning of the biggest demographic change then hitting the United States—the birth of 75 million babies, or nearly four million per year for almost 20 years. The Rosenbergs, who eventually had three children of their own born in the midst of the boom, quickly realized how important toys were to both children and their families.

Born in Chicago in 1918, Norman Rosenberg was a naval officer stationed in San Francisco during World War II. Near the end of the war, he went on a blind date with a local girl, Doris Brodofsky. The two hit it off and were married a short time later.

After the war, Norman’s father-in-law urged the newlyweds to consider going into business. The Brodofsky family had long been the owners of a popular notions store, called The Bell Bazaar, located on 16th Street in the bustling Mission District. Norman and Doris agreed that the time was right, and they selected a site at 645 Clement Street in the expanding Richmond District for their own similar stationery and toy store—cryptically listed in city directories of the early 1950s as “Norman’s—party favors.” By the end of that decade it had acquired its iconic name, “Norman’s Kingdom of Toys,” and had expanded into the adjacent storefront at 651 Clement.

Working themselves to clean up and stock the tiny shop, the Rosenbergs laid in a supply of both stationery and toy items. They quickly discovered that toys were far and away the best sellers, and they soon expanded the business by focusing exclusively on toys, dolls, model trains, board games, and the ever-changing “must have” items ranging from hula hoops and bongo drums to electric trains and chemistry sets, to Beanie Babies, Teenage Mutant Ninja Turtles, and Transformers, depending on the year. As the chain expanded, so, too, did the offerings. By the time suburban stores were spring up in the 1960s, portable swimming pools were among the popular items—something that could hardly have been imagined in the early days on foggy Clement Street.

During one Easter season in the 1950s, Doris Rosenberg walked down the street to the old Woolworth store one day to buy plastic Easter grass and candy. Combining these items with toys such as a small pail or a watering can, and then wrapping the whole thing in cellophane and tying it with a bow, she managed to create a hit Easter gift that sold out year after year.

Innovations like these helped the store to prosper, and by 1954, "King Norman" had his own Saturday morning live television program on the ABC affiliate, KGO-TV, Channel 7. With a studio audience of children, the King, in his regal robes, was assisted by his wife Doris, always in her own distinctive costume as the King’s assistant, Page Joy. The program generally involved a couple of special boys and girls from the audience who were presented to the King, plus some kid-focused public service announcements on issues like dental care or fire safety, and a variety of gift items from the King’s treasure trove of toy stock, bestowed on lucky audience members. Tickets were always in demand, and this author still remembers, with great sadness, that his own bout with measles, circa 1958, kept him from attending on a long-ago Saturday morning when he was fortunate enough to have acquired a free ticket. 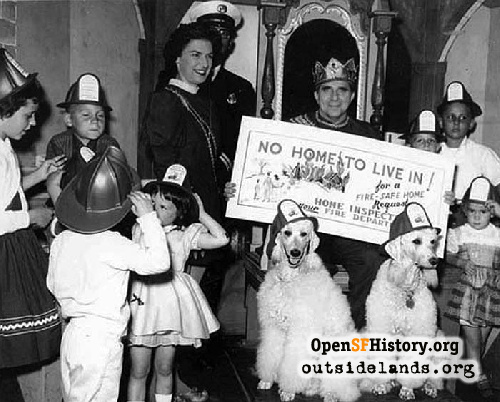 Children growing up in the city in that era had a number of live TV program hosts who welcomed young studio audience members—Skipper Sedley, Marshall J, and Captain Satellite, to name a few—but King Norman was the ultimate in terms of audience participation. Each Halloween, Clement Street merchants held a parade, led by none other than King Norman and Page Joy. Children turned out by the thousands, on a street well known for its civic celebrations.

Eventually, the kingdom peaked at 21 stores throughout the Bay Area, and even into the Central Valley, by 1981. For many years, adjacent to the suburban Concord store, there was a marvelous amusement park—something spectacular for Contra Costa County kids who grew up in a place so far from our own beloved Playland-at-the-Beach. An eight-minute home movie from 1956, showing “King Norman’s Wonderland,” filled with small-scale railroads, motorized tractors, pony rides, low-flying airplane rides, and the like, has been preserved on YouTube. Watching this film, now nearly 60 years old, is a pleasant reminder of just how simple and uncomplicated life used to be for both youngsters and their families.

Sadly, the television program, the amusement park, and the annual Clement Street Halloween parade have now all become faded memories of a much-loved past. After nearly 35 years of reigning over their kingdom, the Rosenbergs reluctantly had to acknowledge that things were changing in the toy business, and that their stores could no longer keep pace with the big discount retailers that were expanding constantly. Some of their stores closed, and with regret, Norman and Doris sold the remainder of the chain to a big toy retailer, Kay-Bee Toys, in the mid-1980s.

The Rosenbergs eventually retired to San Jose to be near their children and grandchildren, yet the King remained recognizable to his appreciative public admirers for decades. Doris passed away in 2008 at age 85. Norman remarried a year or so later, and today, at age 97, he and his new wife are living in a Sacramento retirement community near his son.

On behalf of thousands of San Franciscans who grew up in the 1950s and 1960s, a thank you to the King for all that he and Page Joy did for their city and its young residents back when we were all still growing up.