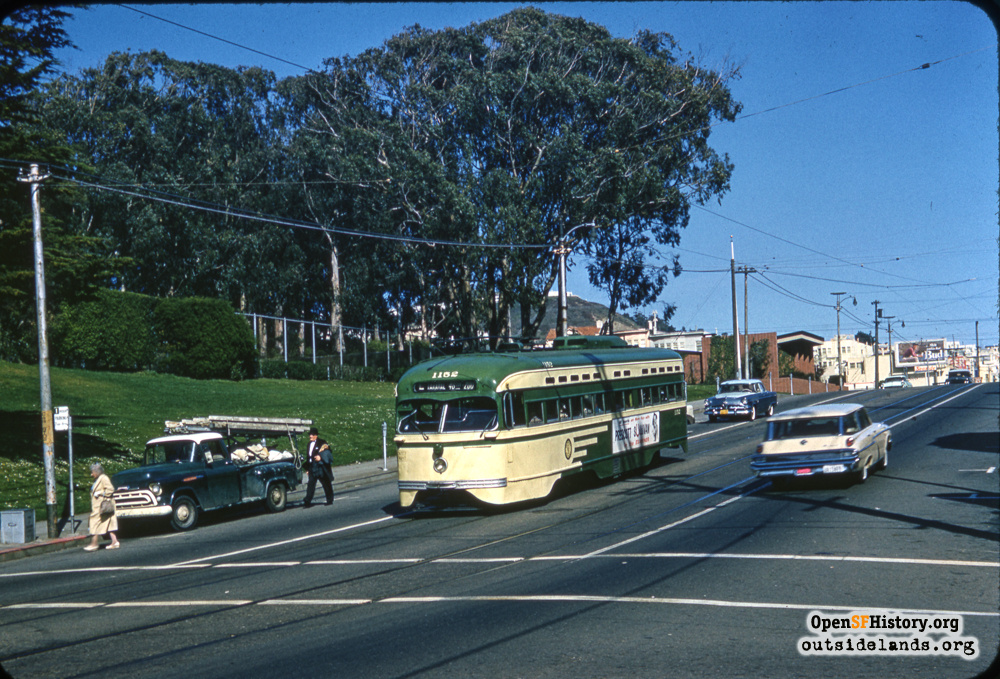 I was fortunate to have been born in the early 1950s, which enabled me to experience San Francisco Municipal Railway (a.k.a. MUNI) from an early age, on a variety of conveyances, some of which exist today only as part of MUNI’s historic rolling fleet and/or in the minds of old-timers.

My earliest MUNI memory was riding downtown with my parents on the L-Taraval streetcar in about 1953. I remember them saying something about “going under the hills” to get to Market Street, and I remember being quite disappointed when the streetcar did not burrow its own hole into the ground after a few blocks. 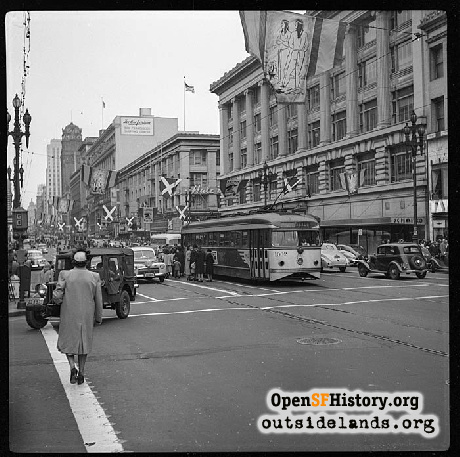 The car we were riding on was old, even by 1950s standards. I now know that it was a MUNI “Iron Monster” streetcar, a design first introduced into revenue service in 1914, just two years after MUNI’s founding. (http://www.streetcar.org/streetcars/162-162-muni-1950s-livery/) Painted in MUNI’s then-standard green-and-cream, the most obvious feature of this streetcar, especially to a toddler, was the fact that when the car came to a stop, the driver-controlled entry doors opened and two wooden steps unfolded downward so that the passengers could enter more easily. For a child of two, this was important—perhaps even more so now that many of us are well into our 60s. Cars like this continued in regular revenue service on most MUNI lines until 1958.

Through the Twin Peaks Tunnel we went, zipping along at a steady speed. I quickly noticed the recessed alcoves along the tunnel’s walls, each lighted with a single incandescent bulb. Within 30 seconds, I began announcing the location of each burned out bulb to my parents—“THERE’S ONE—THERE’S ONE…”—likely to the annoyance of all the other passengers. In later years, many schoolmates insisted that they had a friend or older sibling who had managed to walk through the tunnel, ducking into these alcoves to avoid each passing car, but that sort of daring never appealed to me. During the tunnel’s 1970s reconstruction in advance of MUNI Metro service in the 1980s, the lighting was reconfigured, communications were upgraded, an emergency fire-suppression water standpipe system was added, and new wooden ties (loaded with strong-smelling creosote) were laid beneath new tracks.

At Forest Hill Station on that long ago day, Dad told me that we were underneath the familiar building at 7th Avenue and Laguna Honda Boulevard that we often passed when riding in a car on the streets above. I still did not have the concept down clearly, and the plain white tile walls of that era immediately made me think that we were passing through some sort of a gigantic restroom. At Eureka Street, there was another stop, though the station was not nearly as big as Forest Hill, and we then emerged onto Market Street—my first trip downtown! (Note that the now-closed Eureka Street station was originally planned as a transfer station for a MUNI crosstown Sunset-Mission line. (See: http://www.metrocitybooks.com/images/Muni-1x-Muni.pdf, p. 26.)

Riding down Market Street, I was fascinated with the sights—particularly the old “birdcage” traffic signals, with their alternating red-green lights and “gong” sound whenever the light changed. The City of San Francisco began installing these, manufactured by the Wiley Company, in about 1920, and sold off the last of them in 1957, for about $10 each. (To view one of these contraptions in operation, though with its very loud gong turned off, see: https://www.youtube.com/watch?v=kwlVq6BqsEI).

By the time I was 10 or 11, my parents would allow me to ride downtown on the L-Taraval on my own—something that would probably attract the scrutiny of Child Protective Services today. Often headed to Bill’s Terminal (the Lionel train store on Market near Church Street), or the Emporium or Woolworth’s department stores, the ride was on the so-called Magic Carpet cars that most of us seniors remember from our youth. Mom’s only admonitions were: “Give up your seat for old people, always get a transfer, and sit near the driver.” Some of the streetcars from this era had been with MUNI from the time of “two-man operation” prior to World War II, when there were both conductors and motormen, and had been designed for operation from either end—it was a real treat to be able to sit at a console (albeit, a non-operative one) that remained on some of the cars.

For youngsters, streetcars provided a variety of reading materials: TAKE ONE, along with the simple and straight-forward triple warning RADIOS SILENT, NO SMOKING, NO LITTERING. For more advanced readers, there was INFORMATION GLADLY GIVEN BUT SAFETY REQUIRES AVOIDING UNNECESSARY CONVERSATION. The classic, though, was posted above the back exit-only doors of streetcars: AT PASSENGER STOPS YOU OPERATE REAR SAFETY DOORS BY YOUR WEIGHT ON TREADLE STEP—DOORS CLOSE AFTER RELEASING WEIGHT—THEREFORE KEEP YOUR FOOT ON BOTTOM TREADLE STEP UNTIL CHILDREN WITH YOU HAVE ALIGHTED AND ARE CLEAR OF DOORS. For years, San Francisco Chronicle columnist Herb Caen used to ask why MUNI did not simply say, “STEP DOWN TO OPEN." 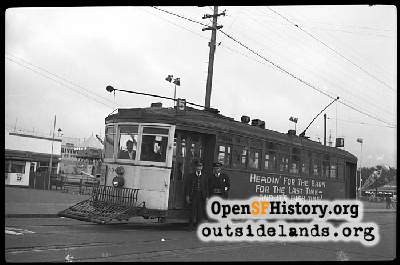 By 1966, I was off to St. Ignatius High School on Stanyan Street, taking the #28-Nineteenth Avenue bus and then transferring to the #5-McAllister at 25th Avenue and Fulton Street in the mornings, and then returning home via the #31-Balboa and transferring to the #28 at 25th and Balboa Street each afternoon. In those days, the #28 and #31 lines were served by post-World War II diesel coaches built by the Mack Bus Company. Sometimes, though, in the late afternoons, older buses from the White Motor Coach Company were substituted on the #28 line. These were older, smaller capacity, lacking in power on the uphill stretch from Golden Gate Park to Quintara Street, and always belching exhaust fumes into the coach. Many of us would sit and wait for the next bus if we saw a White Motor Coach approaching in the afternoons.

The #5-McAllister line, on the other hand, was mostly served by postwar Twin Coaches, which had replaced streetcars on that line beginning June 5, 1948. Silently gliding along, powered by overhead wires, the ride was easy enough to allow for studying or writing last-minute papers for class. After the streetcar conversion to bus operations, the old MUNI yard at Fulton Street and Masonic Avenue was rebuilt as "Petrini Plaza," which remained for decades until it was replaced with a new condo/shopping complex early in the new millennium. The death knell for the old #5 McAllister name came in 1981 when the entire line—all the way to the beach—was renamed the #5-Fulton—Beach.

Many S.I. guys took the #31-Balboa to get home at the end of the day. It beat out the #5 McAllister in the afternoons for two reasons: 1) The transfer point to the #28-Nineteenth Avenue was at 25th and Balboa, two blocks north of the 25th and Fulton transfer point for the #5 line, thus assuring a better chance of a seat, and, 2) The #31 line had lots of girls from Presentation High School to chat up in advance of the next dance or football game. Once on the #28 bus, there were also girls from the old Star of the Sea Academy at 9th Avenue and Geary Boulevard riding home to the Sunset District, in their yellow-brown uniforms vs. the blue plaid of Presentation.

Occasionally on a fall or spring day, during those years, I might go to study on a bench in Union Square, at Civic Center Plaza, or at the end of the cable car line near Aquatic Park after school, in order to read the Merchant of Venice or Canterbury Tales for English class in peace and quiet. All these spots were easily accessible and cost just a single punch on my 10-punch car ticket—and even though there were tourists on the cable cars back then, it was still possible for residents to use the lines easily for getting around town.

The summer of 1969 saw the first new MUNI rolling stock that many baby boomers had ever seen. New General Motors coaches were purchased and the maroon-gold livery was unveiled to replace the old green-and-cream. St. Ignatius High School made its move to 37th Avenue in August of that year, and although I was taking the old L-Taraval Magic Carpet Cars for most of the ride, I seldom waited for the #72-Sunset bus, finding it faster to simply walk the remaining three blocks to school.

Later, in the 1970s, BART/MUNI construction on Market Street was nearly as difficult for the riding public as post-1906 construction era in the downtown area must have been. Breakdowns and delays were routine, and while some of the construction involved tunneling, there were large open pits at most station locations—particularly at 5th and Market Streets, opposite Powell Street.

Navigating the torn-up and boarded-over streets, plus walking along narrowed, fenced-in sidewalks, proved a burden to many, and it was no coincidence that downtown business suffered. With the added mix of Hare Krishna dancers and street merchants/artists, downtown San Francisco in those years often felt like a combination between a Marine Corps obstacle course and the Persian Bazaar. 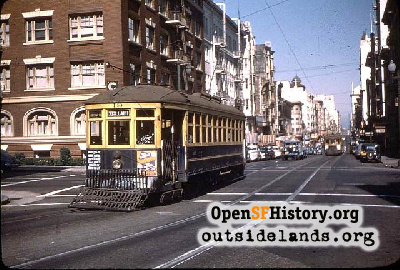 J.C. Penney’s flagship location at 5th and Market, having struggled through many years of inconveniences, finally shut down for good in early 1971, retreating from San Francisco completely. Emporium, located a half-block east of the intersection, struggled on. When BART trains began running through the Transbay Tube that September, Emporium had a direct entrance from BART/MUNI’s mezzanine level into the store’s basement, but by then the public’s shopping habits had begun to shift north of Market Street.

I was a student at University of San Francisco (USF) in the 1970s, and my travel path was similar to when I attended S.I. on Stanyan Street, though with a loop through downtown every afternoon to my part-time job at Bank of America at Powell and Market, before taking the L-Taraval streetcar back home at rush hour. If I happened to be extraordinarily lucky, my morning transfer from the #28-Nineteenth Avenue (already used once on the #5-McAllister to get to USF in the morning) might even get me downtown to work and then home at night if I positioned myself in the middle of the crowd of boarding passengers.

Breakdowns during those years were legendary. Many mornings, commuters found themselves walking from a point deep inside the Twin Peaks Tunnel, west of the Eureka Street station, to the exit at Castro and Market Streets, due to unexplained power failures that delayed the inbound K-L-M lines. In the evenings, the problems frequently occurred at the 11th and Market Street turn-back, where mishandling of streetcar power poles by drivers often caused wide-spread power failures throughout the area.

With the opening of the MUNI Metro subway in 1980, new streetcars, capable of both street and subway operation, were introduced as the standard. The orange-and-white color scheme of the new Boeing-Vertrol cars made them highly visible, and with steps that could be lowered for street operations and kept flat for subway stops, they were warmly welcomed by riders who had endured more than a decade of broken-down cars and seemingly endless construction on the surface of Market Street.

Articulated buses with bendable midsections and greater passenger capacity were first placed into service about 2001, and new models continue to be introduced on several lines.

Eventually, the Boeing-Vertrol cars were retired, and new Italian-made Breda streetcars were introduced around the turn of the millennium, with more than 150 of them now in service. Initially, many residents along the streetcar lines complained of noise and property damage being caused by the heavier, noisier cars. Adjustments were made, and those complaints eventually subsided—but the Breda cars are now nearing the end of their useful lives.

MUNI has now ordered 260 new streetcars from German manufacturer, Siemens, with delivery of the first 24 vehicles coming in time for testing on the new Central Subway line, which is scheduled to open for revenue service in 2019.

Times change, but San Franciscans still rely on MUNI more than one hundred years after the first car rolled west to the beach from Market and Geary Streets in 1912.