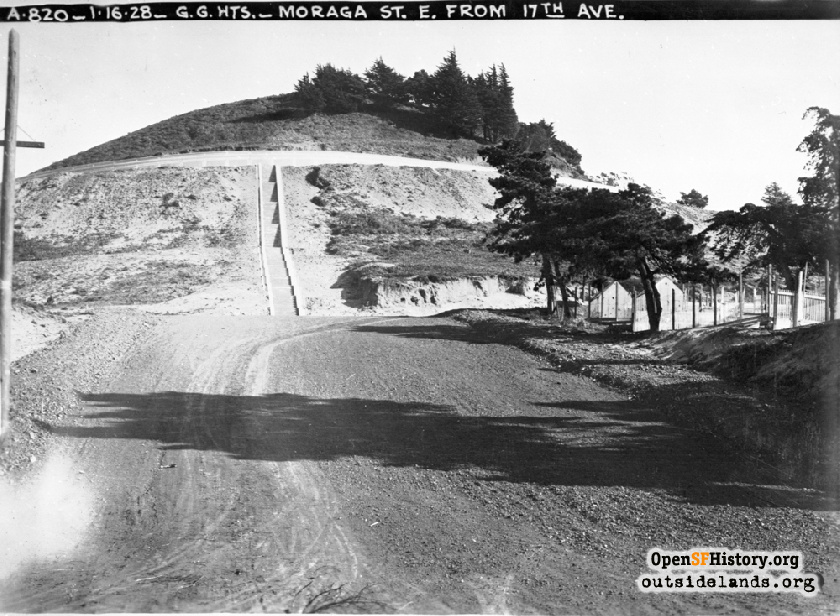 Streetwise - Stairways to the Stars

Streetwise - Stairways to the Stars

Many of us grew up believing that the rectangular blocks of the Sunset District had always been there, or at least that they were laid out somewhere around the dawn of time. However, it wasn’t until the 1920s that the city began to undertake several massive public works projects to complete the geometric street grid across the entire western half of San Francisco.

With streetcar service through the Twin Peaks Tunnel commencing operation in February of 1918 and the Duboce (Sunset) Tunnel set to open in October of 1928, it was important to ensure that builders would have easy access to the lots and homes that they were trying to sell. In particular, the Golden Gate Heights area—bounded roughly by Kirkham Street on the north, Rivera Street on the south, 8th Avenue on the east, and 17th Avenue on the west—required more civic infrastructure work than most other areas of San Francisco because of the hilly terrain.

In this neighborhood the city divided certain streets, grading one side at a considerably different elevation from the other because of the sloping land. In many cases retaining walls were required and often there were stairways running perpendicular to connecting paved streets because some slopes were simply too steep for vehicular traffic. The original plans for these improvements in Golden Gate Heights were signed off in 1926 by legendary city engineer M.M. O’Shaughnessy.

It seems clear today that many developers and home buyers initially preferred the less hilly areas, since those spaces filled up first with homes and businesses. The more rugged upper reaches of the neighborhood, with their spectacular views, were among the last to see large-scale development. Even into the 1960s and early 1970s, Golden Gate Heights had many unbuilt lots at the higher elevations between 12th and 15th Avenues.

As these areas were gradually built up with new homes, pedestrians began to make greater use of the stairways that had been installed back in the 1920s. While the steps were utilitarian, walking them was not always easy. They were often slippery in damp weather; there were no handrails; and blowing sand was a constant problem from the beginning. Graffiti and vandalism were also issues, and over time, many of the steps were chipped or otherwise damaged, posing yet another safety hazard.

In January 2003, a group of neighbors in the Golden Gate Heights Neighborhood Association began considering the stairway that formed the portion of Moraga Street linking 16th Avenue with the much higher elevation of 15th Avenue. An idea emerged to tile the steps, and the neighbors began working with local artists Aileen Barr and Colette Crutcher. The two artists designed a vast mural, with durable, slip-resistant pavers on the treads, and a colorful ceramic mosaic pattern on the risers. Similar projects had already been completed in places such as Italy and Australia, with excellent results.

Artist Aileen Barr, a native of Ireland, had been involved in creating ceramic tile public art since the early 1990s. Since arriving in San Francisco in 2002, her projects have included the West Portal Recreation Center, seating walls and signs at Alta Plaza playground, and designing the first phase of the Lincoln Park Stairway restoration project. Images of her work are online at www.aileenbarrtile.com 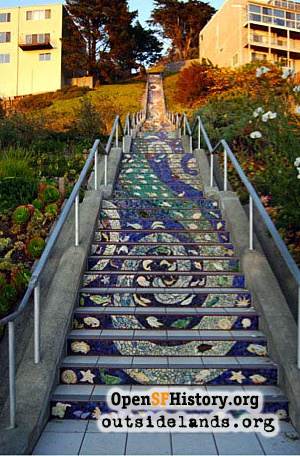 Colette Crutcher began her art career as a painter and then moved on to mosaics using scrap tile, glass, and mirror. Some of her other works include a mural at 16th Street and Sanchez Street, plus the façade (in collaboration with her husband Mark Roller) of the Ocean View branch library at Randolph and Ramsell Streets. She, Mark, and Aileen have also designed a 120-foot tiled serpent sculpture at a mini-park on 24th Street between Bryant and York Streets, as well as a series of mosaics for installation in a Chinatown housing project, and the Arelious Walker stairway in Hunters Point, just dedicated in May 2014. Her work may be viewed at www.colettecrutcher.com

The two artists designed a colorful earth-scape collage for the Moraga Street steps starting at 16th Avenue with scenes depicting the depths of the ocean and its marine inhabitants, progressing upward to display the greenery and floral wonders of the land, along with hills and mountains, plus animals, large and small, then moving on to the skies, with images of birds and butterflies, then moving upward to the stars and the moon, with a magnificent sun surmounting the entire scene at the 15th Avenue level. The artists knew that the west-facing mosaic would capture the late afternoon sun in a way that would make it a dramatic work of art for the entire neighborhood.

The design was enthusiastically accepted by the residents and funding was received from the San Francisco Parks Trust. More than 300 neighbors banded together and volunteered their services to help assemble thousands of tiny pieces of colorful tile for each of the 163 images that were needed to create the stair risers for this massive work of art. Prior to the project, the city’s Department of Public Works cooperated by adding sturdy handrails on both sides of the broad steps. More than 220 people and businesses sponsored individual animal, fish, and bird tiles inscribed with names and embedded randomly throughout the steps of the massive mosaic.

The city permitting process was completed in August of 2004, and working with a local tile-setting company, the project was completed one year later. Working alongside the tile setters, neighborhood volunteers were landscaping and mulching the adjacent area, not only for beautification, but also to control the ever-present blowing sand.

At the 2005 dedication, there were the usual speeches by politicians, but one key fact emerged: it was the resolve of neighbors working together that managed to plan and execute this wonderful neighborhood improvement, one that should be delighting residents and walkers for generations to come.

The success on Moraga Street prompted other nearby residents to look at another bleak 1920s stairway, this one running along the uphill path of 16th Avenue between Kirkham Street and the much higher elevation of Lawton Street. Overgrown and prone to littering and vandalism, the area was also in desperate need of improvement. The same artists, backed by community support, designed a similar project, now entitled "The Hidden Garden Steps," depicting a variety of colorful flora and fauna on the risers of the 148 steps that make up this stairway. Volunteers also designed and installed a hillside garden of native plantings adjacent to the stairs for beautification and erosion control.

Reaching their fund-raising goals via support from both public and private sources was again a challenge, but the organizers of this second project were also successful, and the dedication of this new piece of public art took place in 2013. Neighbors report an improvement in the appearance of the entire area, with graffiti, littering, and vandalism reduced to nearly zero since the installation was completed.

Somehow, mosaic seems to be the perfect medium for these two installations, as it demonstrates clearly how all the diverse elements of our society, when working together, have managed to create such dramatic improvements for the entire community.

- Volunteers gather regularly at The Hidden Garden steps from 1:00 p.m. to 3:00 p.m. on the second Saturday of every month for regular gardening maintenance and clean-up. For more information, go to: http://hiddengardensteps.org/index.html

- The two artists, Aileen Barr and Colette Crutcher, have published a book on their initial stairway project. It is available for $25 plus postage by contacting kramm51@earthlink.net

- More details on the many stairways and retaining walls that are woven throughout the Golden Gate Heights area.