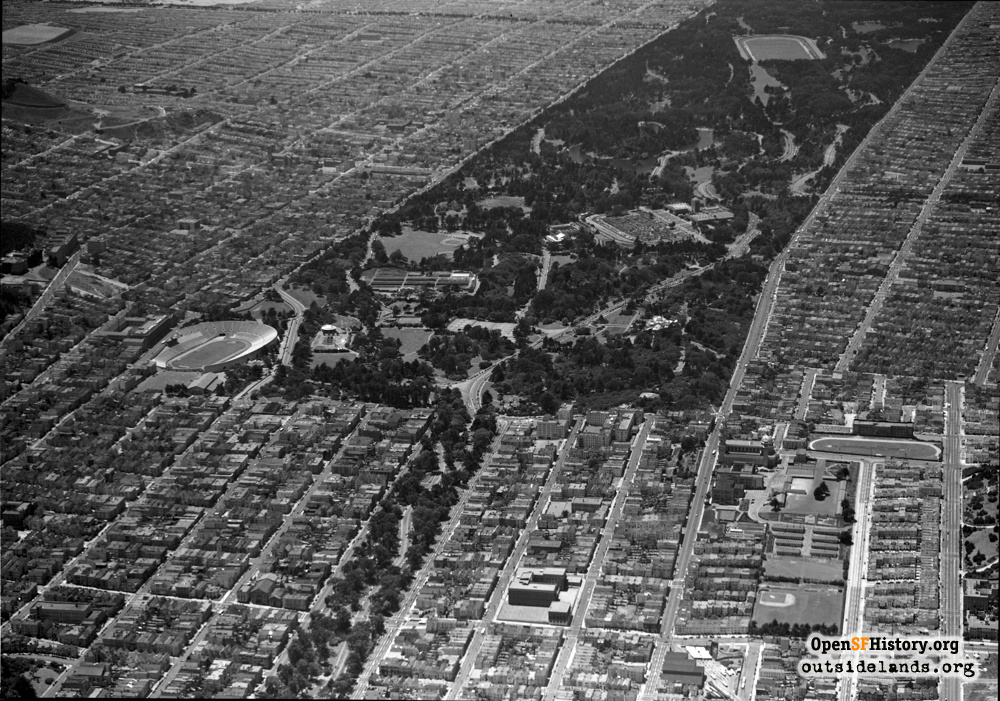 Streetwise - Then and Now

Changing times are nothing new.

Streetwise - Then and Now

As much as I enjoy our WNP site, I confess to reading posts on some Facebook history groups, too. Recently, San Francisco writer Jeff Farris, who grew up on 10th Avenue near Clement Street in the 1960s and 1970s, posted a long article about changes in the city over the years, ending with the intriguing line: “In essence, it’s the same City I knew as a child, only it’s different now.”

So right! In days past, there were many changes taking place that were bemoaned by the locals—rather like today—but then everyone became accustomed to the new ways. In fact, one of my favorite articles from National Geographic begins with: “A rising tide of people and prosperity has changed many things in the City by the Golden Gate…” Of course, those words appeared in the August 1956 issue!

Think back…it has all happened before:

New People with Money: Gold was discovered in 1848 and within one year, San Francisco grew from a sleepy enclave of 1,000 people to more than 25,000—an increase of 2,400%! Another huge spike took place in the decade of the Civil War when the headcount jumped from 57,000 to nearly 150,000—a leap of more than 160%. The hordes arriving from other places were regarded as “new money” by locals, who were put off by the newcomers’ manners and customs. Yet many natives also became wealthy as land values sky-rocketed. A doggerel of the time (slightly cleansed for this family-friendly site) contains an essential kernel of truth: “The miners came in ’49, the girls in ’51, and when they got together, they produced the Native Son.” So even if they weren’t locals, their children certainly were. That same influx of new money also occurred in the years around both World War I and World War II, when many new businesses emerged. One of Mom’s cousins gave up a “steady” job with AT&T after World War II to become an electronics engineer with a Peninsula start-up and everyone worried if he would make it financially. Needless to say, he and his family, whose ancestors arrived in 1907, prospered.

Neighborhoods: The events of 1906 brought about more changes than anything before or since. Nearly 300,000 residents, out of a population of 400,000, lost their homes. Although some residential parts of San Francisco were rebuilt, other sections became industrial. This transition caused many institutions such as houses of worship (Temple Emanu-El on Sutter Street, St. Rose Church on Brannan Street, St. Brendan’s at Fremont and Harrison), plus many local schools (Lincoln School at 5th and Market, the Silver Street Kindergarten, and others) to close or to relocate to new neighborhoods. Three out of my four grandparents lost their homes on the first day of the 1906 fire, while my fourth grandparent was among the wave of newcomers who moved to San Francisco in 1907 to help with the rebuilding. Four different families with four different stories of life-changing events based on that disaster—yet my relatives who arrived post-fire are as much San Franciscans as those who lived here nearly 50 years earlier. 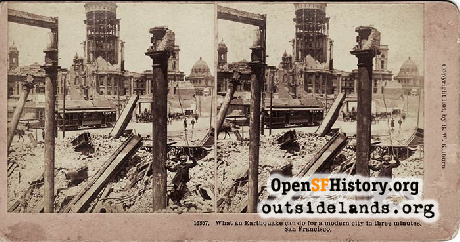 Housing: Rents and housing prices have always been high in San Francisco—period. My parents paid $13,000 for their Parkside home in 1948, 100% more than their neighbors who bought similar places brand-new in 1936! My first house on 22nd Avenue and Pacheco Street cost $100,000 in 1979, I sold it in 1997 for more than three times that amount, and it now sells for almost eight times as much. Today, some question the “fairness” of 1978’s Proposition 13, which caps property taxes, based on purchase price. Thirty-seven years after being enacted, some homeowners still pay about $1,000 per year, while some of their neighbors pay over ten times as much—yet the law was enacted so that long-time residents would no longer be forced out of their homes by rising (yet unrealized) paper profits. Rent control, another well-intended law, was enacted in 1979, but has still not managed to control spiraling housing costs.

Construction: Ever since the first devastating fire hit San Francisco on Christmas Eve 1849, the city skyline has been changing. Stronger building codes, along with engineering improvements, created a new silhouette of buildings reaching high into the clouds by the late 1890s. Change was accelerated by the events of 1906, and then declined during World War I when materials were scarce, but in 1924, Pacific Telephone grabbed headlines by constructing its 26-story (436 feet) headquarters on New Montgomery Street—San Francisco’s first true “skyscraper” and South-of-Market, to boot! It was soon matched by the 32-story Russ Building (also 436 feet) on Montgomery Street—the first San Francisco office building to have indoor auto parking—a sure sign that cars were here to stay. The Russ Building also had the distinction of occupying land that had been purchased by pioneer settler Christian Russ for his family’s home a mere 80 years earlier for the sum of $75—talk about rising prices!

Families: The threat of the Western Freeway (see Streetwise: Dad & Bill’s Night Out) caused many families to consider a move to the suburbs. Although the Freeway Revolt brought an end to that threat, subsequent changes in San Francisco’s schools upset many parents. The 1966 mandate that established Lowell High School as a GPA/test-based college prep institution (thus ending its positon as an alternative to neighborhood high schools), plus the 1971 implementation of district-wide busing at the elementary level, and the decline of Polytechnic High all contributed to a further exodus of families with children. 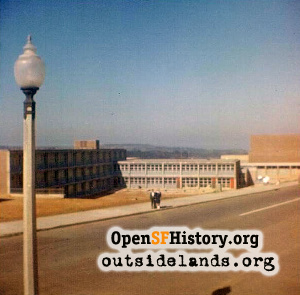 Schools: Decades of tradition came to an end in the 1960s when both Lowell and St. Ignatius high schools gave up their old locations and moved west, but both institutions now have long histories at their new sites. Rising costs forced the closure of many smaller Catholic girls’ high schools (Star of the Sea, Presentation, St. Rose, and others) and co-education eventually came about at some old-time Catholic boys’ high schools more than 25 years ago. Recent discussions about certain school rules have highlighted the fact that many parochial institutions long-ago transitioned from a Catholic base to having large numbers of students who follow beliefs other than Catholicism.

Parking and Traffic: We hear complaints about traffic restrictions and the high cost of daily parking—$40-plus downtown, with facilities near AT&T Park often charging double that amount. In the middle of World War II, the city bulldozed Union Square to construct a huge underground garage, much to the annoyance of the public, and parking meters arrived in the summer of 1947. In the 1950s, city government added the Downtown Center Garage, 5th & Mission Garage, and many others, bulldozing older buildings left and right. Then in October 1970 (nearly half a century ago!), City Hall imposed a tax of 25% on parking fees. Commuters screamed in outrage, planning retaliatory actions against downtown merchants, such as no longer buying lunches or shopping. The protests quieted down, the tax remained, and people still drive, park, eat, and shop in San Francisco. One-streets were introduced before World War II, and were highly unpopular, but soon accepted as necessary.

Travel: When President Eisenhower signed the 1956 Interstate Freeway Act, he was thinking of Civil Defense, motivated by his participation in the Army’s long and tortuous 1919 Transcontinental Motor Convoy from the East Coast to San Francisco that encountered numerous navigational difficulties along the way. Although the Interstates were originally intended for defense, the ease of peace-time driving from place to place encouraged suburban living. At a time when many careers were located in the downtown sector, people weighed their daily commute against the ability to buy newer, larger, suburban homes. Combined with the threat of the Western Freeway and the foggy climate, improved access to the suburbs led many families to relocate to San Bruno, Millbrae, or San Mateo. As time went on, department stores opened branches in suburban malls, “office parks” sprang up in many communities, and whole new school districts emerged—with all of these places offering new educational and work opportunities for residents. This was nothing new for San Francisco—the debut of the bridges in 1936 and 1937 brought about similar, though smaller, shifts in commuting patterns, just as BART would do in the 1970s. Today’s work-from-home telecommuting opportunities continue to erode the necessity of living geographically close to one’s employer. 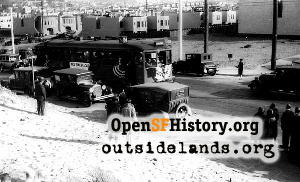 MUNI: Every San Franciscan relies on MUNI at some point, and change usually upsets everyone. Property owners west of Twin Peaks complained about the parcel taxes to build the tunnel in 1917, but soon quieted down when their land values rose as the result of easier access to the downtown business district. My father lived along Duboce Avenue in the 1920s when the N-Judah line and the Sunset Tunnel were being planned. “People will move out of the city because of the traffic and noise,” one neighbor said, but property along the right-of-way increased in value because so many people liked the new line. City Engineer Michael O’Shaughnessey endured further criticism when he developed the M-Oceanview in 1927 because it was considered too costly to run a line into such a sparsely populated area. Today, that line carries more than 25,000 daily riders, enabling places like Stonestown, Parkmerced, and San Francisco State University to thrive. Streetcars on Geary were eliminated in 1956 to “speed traffic” and people are now looking at a possible return of streetcars to do the very same thing. And as much as I was an early skeptic about the new Central Subway from Mission Bay to Chinatown (and hopefully beyond someday), it is clear that such expansion is essential with a potential future ridership that would fatally strain the capacity of the present-day 30-Stockton bus line.

Entertainment: In the 1920s, when the western neighborhoods were being built, philanthropist-banker Herbert Fleishhacker gave generously to the people of San Francisco by developing a free zoo and the world’s largest outdoor public pool on Sloat Boulevard, while Mrs. Alma Spreckels donated the magnificent Palace of the Legion of Honor, and the Whitney Brothers consolidated a collection of carnival rides into “Playland-at-the-Beach.” In the 1930s, the 40-year-old Sutro Baths building was renovated to include an ice skating rink and a “Tropic Beach”—providing additional fun. Along with movie theaters that served every neighborhood, it was truly a golden time for moderately-priced entertainment. Things slowly began to change after World War II—people discovering television, going to Disneyland, and attending major-league sporting events for teams that had just expanded to the West Coast. The 1963 demolition of the Fox Theatre, 1966 fire at Sutro’s, followed by a 1970 introduction of admission fees at the Zoo, the 1971 closure of Fleishhacker Pool, the 1972 sale/destruction of Playland, and the demise of many movie theaters (Clement Street’s venerable 4-Star is now being eyed for new condos) marked the end of an era for low-cost neighborhood entertainment.

Shopping: Did people buy cars and then drive farther away from home in search of bargains, thus leading to a decline in small neighborhood retailers and subsequent increases in their prices? Or were those neighborhood stores charging slightly more, which encouraged nearby residents to look elsewhere in order to save money—so that they might afford a car to go shopping?

Times continue to change—or as Grandma was fond of saying, the only sure things in life are death and taxes.