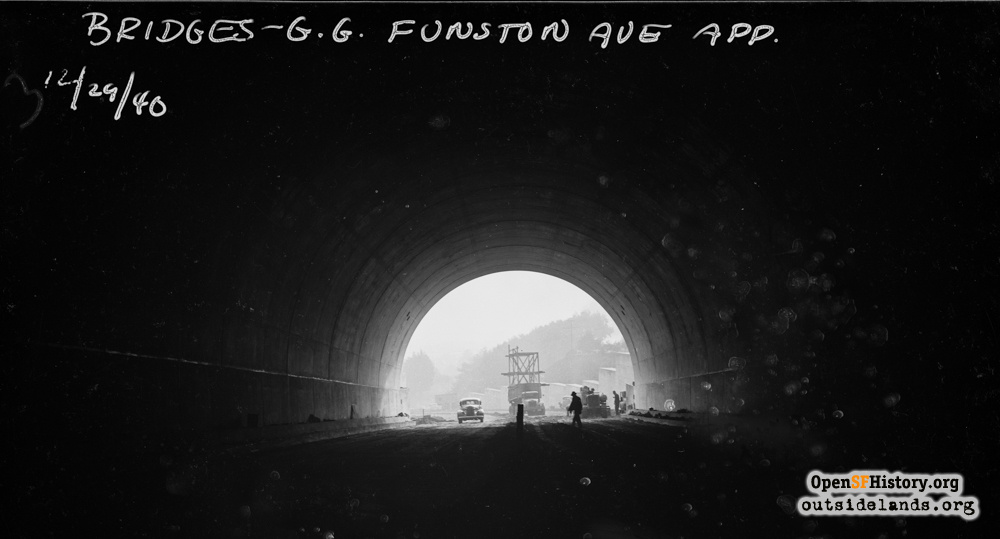 The tunnels of San Francisco

If ever there was a Streetwise column that could make readers sit up and say, “Really?” then this is the one.

San Francisco, built on a series of hills, has been laced with tunnels for many, many decades. Some are heavily used, some less frequently, some have completely vanished from the scene—and some never made it off the drawing boards.

For our purposes, it is necessary to exclude most sewage tunnels—yes, they exist and they are certainly the most common form of tunnel beneath our streets—but here, we will focus on those that were designed for legal public access by railroads, vehicles, and/or pedestrians.

Within the Western Neighborhoods

Twin Peaks Tunnel: The grand-daddy of them all, 2¼ miles long, completed in 1917 and opened for service in 1918, linking Castro and Market Streets to West Portal Avenue. This tunnel was the largest single factor in opening up residential development west of Twin Peaks. Long home to the K-L-M streetcar lines, it now also serves the T-Third Street line (in conjunction with the K-line) and the S-Castro shuttle on days of Giants baseball games. The original 1917 façade was demolished in 1976 in order to build a new station that would be accessible to the LRV surface-subway cars that went into service in 1980. 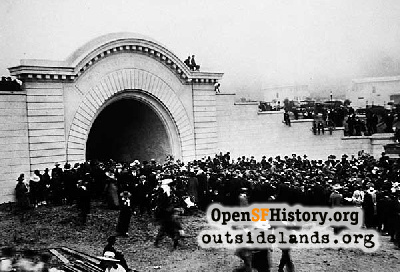 Wawona/Taraval/Judah Pedestrian Tunnels: Built in the late 1920s, these tunnels provided pedestrian access to Ocean Beach beneath the Great Highway. They were removed in the 1980s during construction of the Westside Transport Box, a massive sewer line running beneath Great Highway that carries waste water to the Westside Sewage Plant just south of Sloat Boulevard. Those who remember the tunnels do so with their noses held against the odor.

Geary-Masonic: Some might argue that this is really an underpass, but with multiple streets and sidewalks on the surface above, it fully qualifies as a tunnel. Opened in 1974, it removed a major bottleneck between downtown and the Richmond District.

MacArthur Tunnel: Although the Golden Gate Bridge opened in 1937, it was not until the early 1940s that there was a direct link to the western neighborhoods and to San Mateo County, with the completion of the tunnel (now named MacArthur) beneath the Presidio golf course, and linking Park Presidio Boulevard and Lake Street with the Doyle Drive/Presidio Parkway approach to the bridge.

Pedestrian Tunnels in Golden Gate Park: A number of structures were designed in the 1890s so that pedestrians would not have to cross the original horse-and-buggy traffic on several of the drives in Golden Gate Park. Crossover Drive linking 19th Avenue to Park Presidio Drive is a tough one—is that an overpass, underpass, or tunnel? 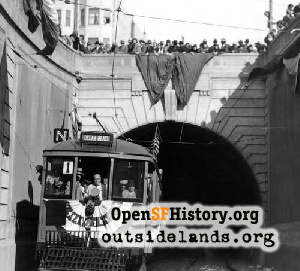 Music Concourse Garage: The 2005 opening of an 800-car garage beneath the Music Concourse of Golden Gate Park, providing parking for the de Young Museum and the California Academy of Sciences, and also creating an enormous pedestrian tunnel beneath the seating area of the band shell. Opponents were upset that the construction required demolition of a century-old pedestrian tunnel to the Shakespeare Garden.

Land’s End: The long-gone Ferries and Cliff House Railroad line passed through its own tunnel on the route between Sutro Baths and the terminus on California Street.

Sutro Baths: In the late 1800s, Adolph Sutro built a series of tunnels to service Sutro Baths. The "Large Tunnel" was originally used for carts transporting debris, and it remains open to visitors, while the "Main Tunnel," used for intake of seawater to a catch basin, is now inaccessible to the public. A backup pump tunnel and maintenance tunnel still exist, but both have been sealed for visitor safety.

Golden Gate Bridge: A tunnel (or very large underpass) exists beneath the toll plaza building for vehicles to reach the opposite side.

BART: Certain tunnel portions of BART pass through the western neighborhoods in the OMI area. Originally, there were plans to extend MUNI’s subway under West Portal Avenue to St. Francis Circle, but local merchant opposition scuttled that plan. 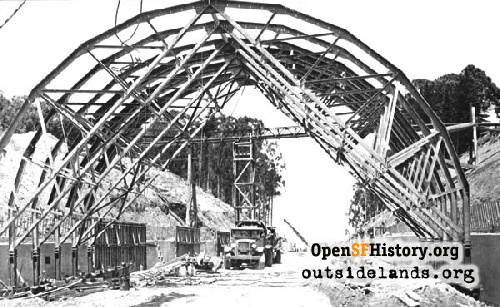 The 1300 foot MacArthur Tunnel was constructed during 1939. The material taken from the tunnel cut was used to fill a marshy area at the edge of Mountain Lake., 1939 - California Highways and Public Works Journal - June 1939

Beyond the Western Neighborhoods

Stockton Street: One of San Francisco’s first streetcar/auto/pedestrian tunnels opened in 1914, linking the downtown area with Chinatown and North Beach beneath Nob Hill.

Broadway: Long envisioned by city planners, the Broadway Tunnel opened to vehicle and pedestrian traffic in 1952, linking Pacific Heights with Chinatown and North Beach beneath Russian Hill. In January of 1986, the tunnel was officially named for Robert C. Levy (1921-1985) who had been the City Engineer and Superintendent of Building Inspection. Mr. Levy was a long-time resident of Sylvan Drive in the western neighborhoods.

Fort Mason: Railroad link from Aquatic Park to the Marina was built in 1914 to provide building materials to the Pan-Pacific International Exposition site. It is has been closed since 1970, though transit proponents currently favor a rail link from the F-line at Fisherman’s Wharf to Crissy Field by way of Marina Boulevard.

BART Tunnel: From the Ferry Building up Market Street to Civic Center, then under Mission Street to Glen Park, Balboa Park, and on to San Mateo County.

MUNI Metro Tunnel: From the Ferry Building to Castro and Market where it merges with the Twin Peaks Tunnel.

Central Subway: MUNI’s new Central Subway tunnel runs from an entrance near the Southern Pacific Station at 4th and Townsend Streets underground to the Yerba Buena/Moscone Center Station at 4th and Folsom, then passes under Market Street’s BART/MUNI subway, with the next station at Union Square, before ending its run at Chinatown Station. Because it is separate from the BART/MUNI subway, a new underground pedestrian tunnel has been constructed from the Geary-Stockton corner of Union Square to a point two blocks south at Stockton and Ellis Streets for pedestrian access to BART/MUNI’s Powell Street station. Revenue service is set to begin in 2019—just four years from now.

St. Francis Hotel: Upon completion of the Union Square Garage in the early 1940s, there was a direct tunnel link to the St. Francis Hotel across Powell Street. It has been sealed for years.

Alemany Boulevard: Long before World War II, San Francisco’s Department of Public Works installed a series of underground pedestrian walkways beneath Alemany Boulevard, one of which was located at Santa Rosa Avenue. All of these have since been sealed due to crime and vandalism.

Morris Olson Tunnel: Constructed in 1949 as a pedestrian walkway beneath the 101 freeway, and linking Bayshore Boulevard to eastern slope of Bernal Heights, the tunnel was sealed off after a 1968 pedestrian bridge was constructed over the freeway. This is likely San Francisco’s most obscure tunnel.

Southern Pacific: Circa 1907, Southern Pacific Railroad built a series of four tunnels in the southeast corner of San Francisco, that continue to provide access to and from San Mateo County.

Transbay Transit Center: This new facility, under construction since 2010, is due for completion in 2017, and will include tunnels for MUNI, AC Transit, Golden Gate Transit, Greyhound, CalTrain, and California’s new high-speed rail system. A possible pedestrian tunnel beneath Fremont Street to BART/MUNI’s Embarcadero Station is currently under discussion.

Bay Tunnel: San Francisco’s newest tunnel exists 100 feet below the floor of San Francisco Bay, running essentially parallel to the Dumbarton Bridge, linking Newark and East Palo Alto. Although located in San Mateo County, the structure is owned by the San Francisco Water Department, and was excavated to transport Hetch Hetchy water to the Peninsula. The new tunnel replaces a pair of pipes, constructed in 1925 and 1936 (deemed highly vulnerable in an earthquake) that were built on wooden piers near the Dumbarton Bridge.

Some tunnel plans never made it off the drawing boards of city engineers:
** A Fillmore Street Tunnel between Sutter and Filbert.
** A Steiner Street Tunnel from Pine to Union.
** A Divisadero Street Tunnel from Pine to Lombard.
** A Divisadero Street Tunnel from Sacramento to Greenwich.
** A Mission-Sunset Tunnel intersecting the Twin Peaks Tunnel at Eureka Street.
** A MUNI and/or BART extension under Geary to the Richmond District.
** A branch of the Twin Peaks Tunnel to the Sunset under Golden Gate Heights.
** A Mission-Sunset Tunnel from 16th Street in the Mission to Irving Street in the Sunset. This never-built project would have connected two large neighborhoods, with a transfer point at the now-abandoned Eureka Street station of the Twin Peaks Tunnel. Once the Sunset (Duboce) Tunnel was built, the Mission-Sunset route became less important, and was abandoned.
** The Western Freeway, as envisioned, would have linked SFO to the Golden Gate Bridge, thereby obliterating a wide swath of the Parkside, Sunset, and Richmond Districts. Part of the plan included a tunnel from about 15th Avenue and Santiago Street to a point just north of MUNI’s Forest Hill (Laguna Honda) Station.

Historian James R. Smith, who has authored two Playland books, reports that BART construction on Market Street in the 1960s unearthed a long-forgotten tunnel linking the Warfield Theater with a former speakeasy across the street. Likewise, there have long been rumors of a tunnel (which may or may not have been used following President Harding’s 1923 death) linking the Palace Hotel and the House of Shields across New Montgomery Street. Rumors of a vast labyrinth of tunnels beneath Chinatown, though, may or may not be the stuff of urban legend. 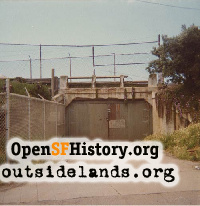 And one special category

One elderly neighbor caught me off-guard several years ago when she talked about yet another very popular “tunnel” in the history of the Western Neighborhoods—one that she and her friends remembered vividly from their younger days—Playland’s so-called Tunnel of Love.

If your favorite San Francisco tunnel has been overlooked, please let me know!

Addendum: Many thanks to reader Bob Carini for reminding us of the two tunnels (in addition to the others at Judah, Taraval, and Wawona) that used to run beneath Great Highway, linking Fleishhacker Pool to Ocean Beach. Bob took photos of the boarded-up entrances in April of 1979, some seven years after the pool was closed.