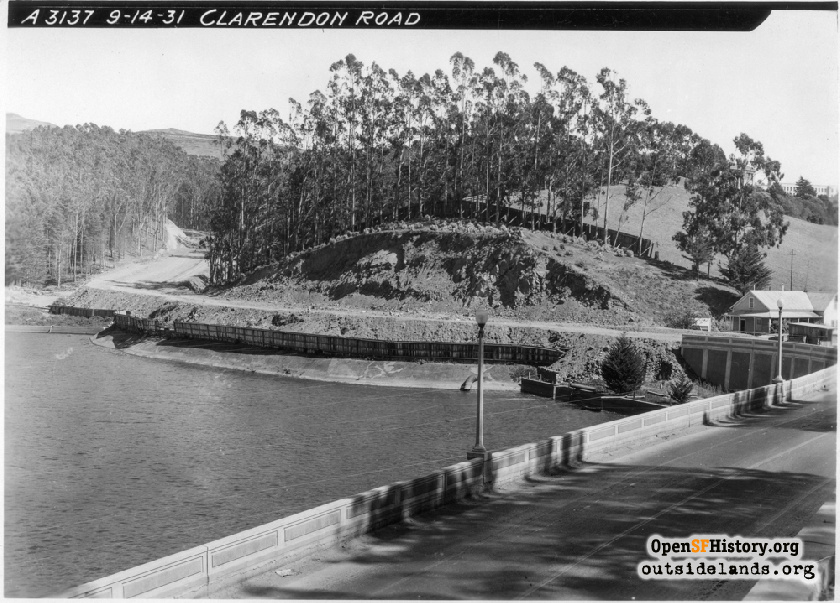 One of the most obvious symbols of local government in our daily lives is the presence of thousands upon thousands of city-owned/maintained fire hydrants in every single neighborhood of San Francisco.

With a long history of wooden architecture, the city was nearly destroyed by fire on six different occasions between 1849 and 1851. There were also other serious blazes over the years, but the disaster of 1906—estimated to stem 20% from the earthquake and 80% from the ensuing fires—was the final straw in the minds of civic leaders. Almost before the ashes cooled, local government embarked on a serious program of fire prevention and control with construction of a new high-pressure water system—the only one of its kind in the United States. 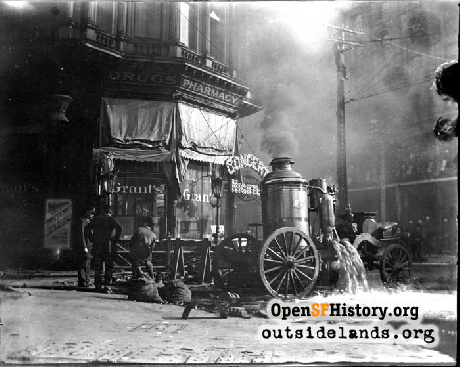 Based on the 1906 earthquake damage to water lines and the lack of sufficient water and water pressure to fight fires, city engineers determined that there needed to be an Auxiliary Water Supply System (AWSS in Fire Department lingo) that would be installed alongside the original system, supplying water at higher pressure by a system designed with greater resistance to earthquakes. In addition to thicker iron mains, all of the infrastructure (including connections, joints, and mounting of hydrants) were designed with additional reinforcements in order to minimize the risk of breaks or lateral movement (known as “telescoping”) of underground pipes during earth movements. Also, given the increase in density due to the increasing number of taller buildings, the AWSS was designed with additional water pressure for fighting difficult fires in larger structures.

In 1908, San Franciscans enthusiastically taxed themselves $5,200,000 for a bond issue in order to build the high-pressure auxiliary water supply system. Construction began almost at once, and the system was completed by 1911. After testing, it was turned over to the San Francisco Fire Department (SFFD) and has been in service since 1913-14. This system is marked today by nearly 1,900 large hydrants, located in high-density areas throughout the city. These large white hydrants differ from one another, based on color-coded tops:

All these tanks are kept filled to capacity, however, in the horribly unlikely event that either of the smaller tanks were to run dry because of massive need, the 10.5 million gallons of stored water atop Twin Peaks is designed to flow by gravity into both the Ashbury and the Jones tanks, thereby assuring water at all high-pressure system hydrants. 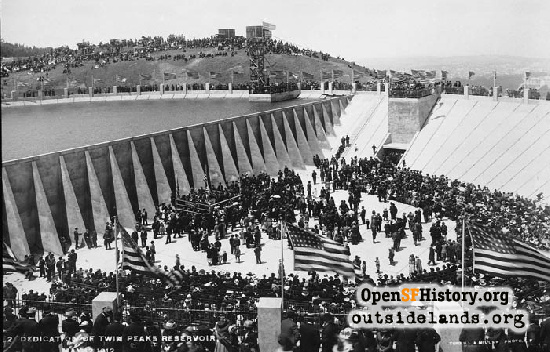 Two emergency pumping stations were built as part of the 1908 bond measure that can supply the high-pressure system with seawater. Both stations are capable of pumping 10,000 gallons per minute, either to the Twin Peaks reservoir, or else through the high-pressure system itself, via a series of on-site generators. Pump Station #1 is located in the basement of SFFD Headquarters at 698 Second Street at Townsend, near AT&T Park. Pump Station #2 is located just inside Fort Mason, with access to the waters of San Francisco Bay, and both locations are staffed by SFFD personnel at all times. More than 35 individual Bay suction connection locations are in place on the north and east sides of the city, and can draw seawater in an emergency. While salt water can be a very effective fire-fighting tool, its corrosive nature can damage metal pipes and fittings, so its use is always a last-resort, such as in the efforts to fight the 1989 Marina fires following the Loma Prieta earthquake.

In addition to the high-pressure system, there are also thousands of standard fire hydrants that dot the streets of San Francisco, and they are fed by gravity from a series of reservoirs and storage tanks in various locations. The four primary terminal reservoirs, all filled by gravity flow and not dependent on electrical pumping, are: Merced Manor (23rd Avenue and Sloat Boulevard) and Sunset (24th Avenue and Quintara Street) serving the western half of the city, and College Hill (Holly Park Circle, off Mission Street in Bernal Heights) and University Mound (near McLaren Park in the Portola) serving the eastern portion of the city. Additional reservoirs include: Sutro (Clarendon Avenue) and Stanford Heights (near Miraloma Park). These reservoirs provide water for domestic needs as well as for standard fire hydrants. Various interconnections allow many of the reservoirs at lower elevations to be refilled by gravity from higher elevation locations in the event of an emergency situation.

Over and above these “primary” distributing reservoirs, there are also eight additional tanks throughout the city, at elevations ranging from 290 to 900 feet, each holding from 75,000 to 14 million gallons of water. These are intended to serve specific pockets of the city that have exceptionally hilly terrain, such as the Summit reservoir on Palo Alto Avenue at Glenbrook Drive, serving Twin Peaks-area neighborhoods.

There are many subtle differences that distinguish one standard fire hydrant from another:

As a further back-up to any problems that might occur with reservoirs, holding tanks or pumping stations, two fireboats can be used to fight fires by running hoses along city streets, while simultaneously pumping sea water into the hydrant system—the Phoenix, with a capacity of 9,600 gallons per minute and the Guardian, rated at 24,000 gallons per minute—the largest output of any fireboat, anywhere in the world.

In yet another back-up for any sort of system failure, there are nearly 200 free-standing underground cisterns located throughout the city, with many of the newer ones located in the previously under-served Sunset District, several of them positioned along the length of 37th Avenue, just off Sunset Boulevard, which serves as a natural fire-break on the western side of town. These cisterns range from 75,000 to more than 200,000 gallons, with the water accessible for pumping by fire trucks. The locations are marked with an outline of red brick circles and an access cover with the words SFFD CISTERN. The cisterns remain filled at all times, with a city-wide total of more than 11 million gallons of water in storage below ground for immediate use. (See: this video from the Exploratorium on the cisterns.)

In planning for every conceivable disaster scenario, the San Francisco Fire Department, working in conjunction with the San Francisco Water Department, has also installed a row of 27 standard hydrants along the south side of Fulton Street at the perimeter of Golden Gate Park. Painted green, with light-blue tops, this system is gravity-fed by Stow Lake with a supplemental supply coming from Spreckels Lake.

In addition to these precautions, there are nearly 400 other emergency water storage locations, including every city-owned swimming pool, the Chain of Lakes at the western end of Golden Gate Park, plus storage tanks in commercial buildings and smaller reservoirs, such as the one located at 22nd Street and Wisconsin Avenue on Potrero Hill. Most of these locations have discharge valves at street level that can be accessed by SFFD personnel, who can then utilize the location’s stored water supply to fight a fire directly, or else can download such a supply into a tanker engine or into a nearby underground cistern that might have run dry.

Some areas within the City and County of San Francisco have specialized fire-fighting defenses: 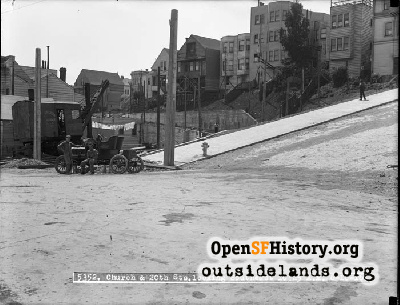 View of 20th and Church Streets shows the hydrant credited with saving the Mission District during 1906 fire. - John Hnery Mentz

Finally, there are also a few unique hydrants within San Francisco:

It is comforting to know that at any given time, standard tanks and reservoirs in San Francisco have a stored capacity of over 413 million gallons of water, with Laguna Honda and Lake Merced (part of the local drinking water supply chain until 1933) providing an additional emergency capacity of more than 2,500 million (2.5 billion) gallons of water.

Given the average age of the many of these components, SFFD continues to plan system upgrades in order to be prepared for anything—something advisable for all of us, as well.