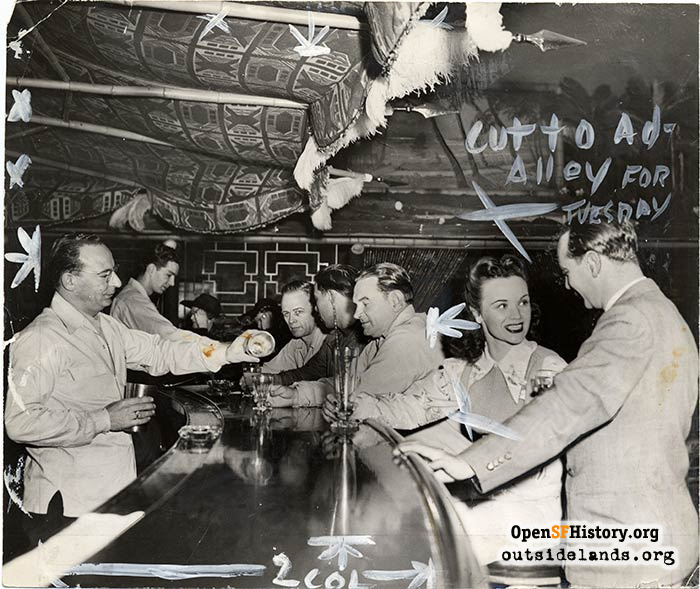 Remembering the bars, taverns, and pubs in western San Francisco.

There must have been something in the foggy mists of the past that gave residents of the western neighborhoods a deep-seated instinct to fortify themselves with “a nip” now and then. Why else were there so many bars and cocktail lounges up and down shopping-district streets like California, Clement, Geary, Irving, Judah, Noriega, Taraval, and West Portal when many of us were growing up?

Even though many of these places have disappeared (a new emphasis on healthful living, perhaps—or maybe just the stark reality that “buzzed” is synonymous with “drunk,” as in driving), several remain today and a handful even qualify as venerable institutions, some going back to the 1800s. 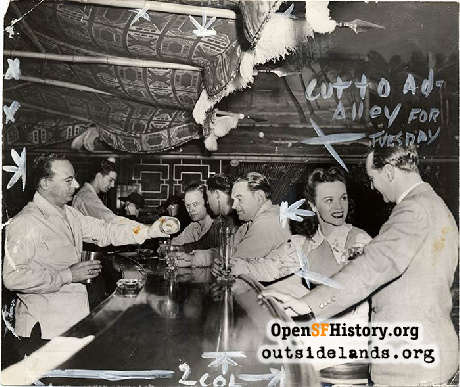 Abbey Tavern—Northwest corner of 5th Avenue and Geary Boulevard. Opened in the early 1970s, this place achieved stardom within a few years. Mobbed every night of the year, but especially on St. Patrick’s Day, it was a throwback to the old country, often with live music, for many American-born Irish.

Club Sirocco—Southwest corner of 29th Avenue and Judah Street. Many locals have warm memories of the Reno trips, Russian River excursions, softball games, and Christmas parties sponsored by this mid-Sunset District bar. When I was visiting there with co-workers who lived nearby in the mid-1970s, there were made-to-order mini-pizzas upon request.

Embers—Irving Street near 9th Avenue. In the late 1970s, it was considered a bit of a gloomy dive bar, frequented by many inveterate smokers. It’s likely that any reunion of their patrons from that time would have a very small turnout today. Under new owners, it began pulling in a trendier crowd, but closed in 1996. This was one of the first places that I ever tried a “Hot Apple Pie”—warm apple cider with a shot each of Golden Rum and Tuaca—whipped cream topping optional. 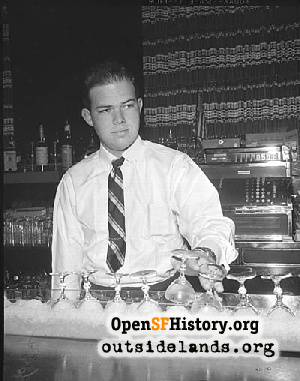 Fahey’s/Dragon Lounge—Southeast corner of 24th Avenue and Taraval. Originally a cop/fireman bar, Fahey’s closed and then re-opened when a new apartment building went up on that corner in the 1980s. One great story, repeated on the WNP message boards, is that Fahey’s sold Gallo salamis—according to one posting, “The idea was if you stayed at the bar for one too many rounds, you took a salami home to soothe the Mrs., and it was also a partial excuse of why you got home late.” That same person also recalled, “Many years later and far from San Francisco, I was talking with someone who mentioned that he had worked for Gallo as a salesman. I happened to mention Fahey’s and he came alive and said they were one of his best customers and that he sold them more salamis than he did at most delis and markets.” In April of 2004, Fahey’s acknowledged the neighborhood’s demographic changes by taking on a new nighttime persona, "The Dragon Lounge," with a staff of Chinese bartenders.

Front Room—823 Clement Street. Known for its 10-cent beer nights (50 cents for a full pitcher of six glasses) every Thursday. They packed in a young crowd, over-salted the pizza sauce, and did a great business for years with a friendly atmosphere and décor similar to the Central Perk coffee house featured on the TV series Friends in the 1990s. Today, a different pizza restaurant occupies the space.

Ireland’s 32—A very Irish bar, catering primarily to immigrants—then and now. Back in the 1970s, a co-worker of mine, born in London during the Blitz of 1940, recalled how she had to keep her voice down when drinking here with friends, lest she be singled out and denounced as a “Brit” by other patrons.

Jacques Daniels—Southeast corner of 20th Avenue and Lincoln Way. In the mid-1970s, this place emerged as an alternative to the congestion (both bar and parking) along inner Irving Street east of 19th Avenue. It also did well in the later 1970s when Arthur’s at the Park—an upscale cousin of Zim’s—was trying to make a go of it in an adjacent spot at the southwest corner of 19th Avenue and Lincoln Way, which had formerly been a Flying A gas station. Within a few years, though, both places had faded into the mists of time.

Jolly Friars—950 Clement Street, at the northeast corner of 11th Avenue. Another long-gone neighborhood hot spot from the 1960s and 1970s. Described in their ads as “A Friendly Place” and it certainly was, complete with dancing. If too crowded (or if there was not enough of a crowd), patrons would regularly cross the street to the southeast corner of 11th and Clement to check out the goings on at…

Library, The—Southeast corner of 11th Avenue and Clement Street. In the 1960s, this neighborhood bar had telephones so that patrons might call others at nearby tables. There was always a steady crowd that meandered back and forth between The Library and the Jolly Friars across the street. One reader recalled that his older sisters used to come home and tell their parents innocently that they had been at “The Library”—until he discovered this establishment’s cocktail napkins—which they used to refer to as their “library cards”—in their purses. This spot later became the trendy Woodstock.

Little Shamrock—807 Lincoln Way, near 9th Avenue. The oldest bar in the Outside Lands—after the Cliff House, of course—this place opened in 1893 to serve the many Irish laborers then working on construction of the Midwinter Fair of 1894 just across the street in Golden Gate Park. Today, it offers board games, comfy sofas, and a variety of spirits to ward off the chills, including great Irish coffee. 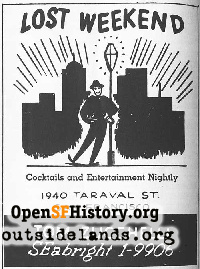 Lost Weekend—1940 Taraval Street. A post-World War II organ bar on Taraval, it held little interest in the 1960s and 1970s for anyone younger than age 55, though it was widely reputed to be a stopping off place before class for a couple of teachers from nearby high schools. The space has been home to a variety of restaurant incarnations over the last 20+ years.

Persian Aub Zam Zam Room—1633 Haight Street. This spot is a throwback in time to the 1940s—you almost expect to see Bogie and Bacall or Joe and Marilyn swagger in at any moment. It somehow managed to survive the Summer of Love in 1967 and the neighborhood’s subsequent changes, when in-the-know San Franciscans would stop in for a perfect martini as Sinatra crooned from the jukebox. It’s had a bit of a make-over since the 1970s—the word “Persian” was dropped in the Ayatollah Khomeni years. Following the death of original owner Bruno Mooshei in 2000, the jukebox was updated to include some Rolling Stones, Bob Dylan, and Johnny Cash—and still the best martini in town.

Philosopher’s Club—824 Ulloa Street. Adjacent to the Twin Peaks Tunnel, this neighborhood spot has been quenching parched throats since Harry Truman was in the White House. Broadcasting popular sporting events from around the world, today’s proprietors also offer a free buffet during football season.

Phineas T. Barnacle—1090 Point Lobos Avenue. When twenty-somethings were not guzzling 10-cent beer on Thursday nights at the Front Room on Clement Street, they were here at the venerable Cliff House (operating since 1863) for a similar special on Tuesday nights. The spot was originally called the Ben Butler Bar (for a long-gone enormous seal/sea lion), and was renamed in 1974. The food was not great, and many patrons eventually looked elsewhere for sustenance. With Playland already gone, and nearby Louis’ Restaurant and the Seal Rock Inn usually closed by six p.m., many people discovered The Hot House in its then-new location at 40th Avenue and Balboa Street, where it operated from 1972-1996.

Plough & Stars—116 Clement Street near 2nd Avenue. Said by some to be the most authentic Irish pub in San Francisco, this spot has offered Celtic music nightly since 1975, often leading to some spirited dancing.

Portals Tavern—179 West Portal Avenue. A pillar of the West Portal Avenue commercial stretch since the 1950s, this place has historically had a friendly local clientele, easy parking, and moderate prices. It has remained essentially unchanged in spite of multiple new owners.

Road to Mandalay—West Portal Avenue near 14th Avenue. With a nautical theme not unlike Bernstein’s Seafood Grotto on Powell Street, this West Portal institution was in business for a scant 20 years, from 1941-1961, but all of us who grew up in the neighborhood in the 1950s were intrigued by it, even though we were never allowed by our parents to venture inside.

Shadow Box—3535 California Street, Laurel Village. Another “clubby atmosphere” bar, run by Harry Meharry who also owned the Miz Brown’s chain of restaurants in San Francisco since 1953. The quiet neighborhood ambience and easy street parking nearby produced a slightly older demographic among the customers, most of whom would not choose to walk to the noisier spots along Geary. 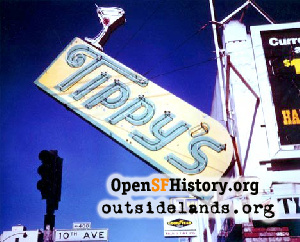 The tipped sign of Tippy's Bar on the northwest corner of 10th Avenue and Geary Boulevard, 1980s. -

Tippy’s—Northwest corner of 10th Avenue and Geary Boulevard. Friendly post-collegiate crowd in the 1960s, though the place began to decline in the 1980s, and closed in the mid-1990s. In its heyday, there could be a huge spillover crowd from Irish wakes held at McAvoy-O’Hara, just kitty-corner at the southeast corner of that intersection. Richmond District historian John Freeman recalls that when Geary was widened to three lanes of traffic in each direction in the late 1950s—following the removal of the B-line streetcar tracks and installation of a planted center median—Tippy’s sign was found to be extending too far over the just-narrowed sidewalks. Rather than order a smaller sign, the owner just had it “tipped” at an angle, which made the bent cocktail glass look even jauntier. Regulars will recall that if you stayed late enough at Tippy’s, you might score a free loaf of freshly baked French bread from the adjacent Boudin Bakery, which has now taken over the entire building.

Trad’r Sam’s—26th Avenue and Geary Boulevard. At University of San Francisco in the late 1970s, there emerged a new weekend activity called the “A-to-Z Run.” This involved finding a “designated driver” with a “mini-van” (both new terms back then) and then identifying 26 local bars, each with a name beginning with a different letter of the alphabet. After a hearty breakfast, often at the Red Roof on California Street in Laurel Village, the group then proceeded to visit and have a drink at each place on the list. (Remember that I said earlier that we are all far more health-conscious today!) The Abbey Tavern usually led off the roster, and several other places included here were part of the afternoon/evening festivities, right up to the usual finale at the Tahitian-themed Zanzibar on Ocean Avenue near the old El Rey Theater. Alka Seltzer tablets and/or drop-off at St. Mary’s Emergency Room were available to participants upon request at the end of the day’s activities.

United Irish Cultural Center—2700-45th Avenue. Although a members-only club, the bartenders are low-key and never seem to card anyone for either age or membership, as long as you are quiet, polite, and have cash sitting on the bar in front of you. Stopping in there one night with a friend who spoke perfect English—though with Spanish as his first language—I was not surprised when he turned to me and asked about the bartenders, “Are they speaking English right now?” I had to admit that even with my Irish-trained ears, it was a bit of stretch to comprehend every word that was being spoken. I often had to listen to their entire conversation, and then sit quietly, manipulating the sounds in my own mind so that I could understand them. Still, it’s a warm, friendly place, just as a club should be.

Reading over this list just makes me long for a cold, drizzly day and a comfortable seat at any one of these fine establishments.