The plan for a botanical garden on this site came from Park Superintendent John McLaren back in the 1890s. 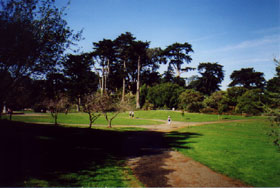 The plan for a botanical garden on this site came from Park Superintendent John McLaren back in the 1890s. Different species were collected in fits and starts, boosted by leftover specimens from the 1915 Panama-Pacific International Exposition.

In 1900 the voters of San Francisco rejected a ballot measure for formal development of an arboretum. Without funding, nothing happened on the site for years. Then, in 1926, in memory of her late husband Christian M. Strybing, Helene Strybing willed the seed money to reinvigorate the project. The 1930s brought efforts from the Works Progress Administration, and the gardens truly began to take shape.

At the time of the arboretum's official opening the 8-acre site featured some 2,000 specimens. Today you can walk 55 landscaped acres and take in some 75,000 different species of plant life.

At the main, east-facing entrance to the arboretum and gardens stands San Francisco's County Fair Building. More appropriately known as the Hall of Flowers, the angular structure was dedicated in 1960 and usually plays host to weddings, horticultural meetings, and public events of all types. In 2001, it was closed for major renovation.

The Helen Crocker Russell Library of Horticulture, open 10-4 daily except for major holidays, has an extensive reference library with some 180,000 books. (Read more about the terrace outside the library.)

"A new Pan American Garden in Golden Gate Park Arboretum was started yesterday with planting of 10 native Uruguayan trees flown by Pan American Clipper as a gift from Montevideo to San Francisco. Above, Dionne Wheeler, 'Miss Arbor Day,' kneels with the originator of the goodwill garden, Oscar Galeno, Mission High School teacher, to help in the transplanting. Behind are Harvey Teller, Park Commission president, and Uruguayan Consul-General Eduardo Dieste. All Latin American counties have agreed to send native trees for the grove."