The other conservatory with a colorful past

San Francisco's second-best-known conservatory (the first being the magnificent Conservatory of Flowers in Golden Gate Park) has had an interesting history:

- Built as a large structures in a landscape of tiny cottages and open fields, it still somehow became so lost in trees and shrubs that its second owners only "discovered" it after chasing their pet dog into the brush.

- Owners of the conservatory have included a balloon aircraft inventor who was killed by a locomotive; a woman named "Temperance" who named the conservatory "Sunnyside Laboratories" and planned to turn it into a sanitarium; and an entrepreneur who marketed bottled water fortified with mineral supplements in the 1920s.

- After being given all the "protection" of being made registered City Landmark #78 in 1975, a third of the building was destroyed three years later when a demolition permit was mistakenly issued by the City. 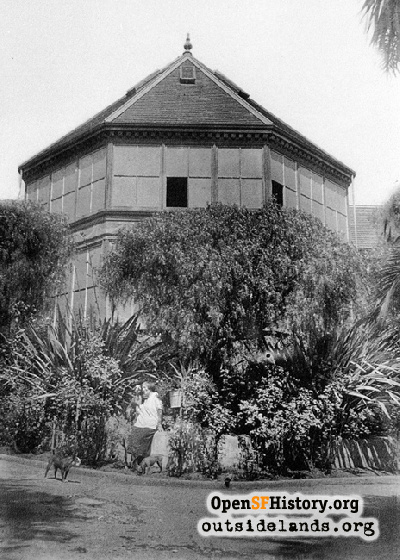 In October 1891 a streetcar gripman named Charles H. Taylor bought the land the conservatory now stands on just a few months after Behrend Joost had begun selling lots in his new subdivision of Sunnyside. Taylor apparently worked as a motorman for Joost's San Francisco and San Mateo Railroad, whose powerhouse was just a couple of blocks east of the property. The house built by Taylor and his wife Ida is today's 258 Monterey Boulevard (originally 230 Sunnyside Avenue, then 236 Sunnyside, before the road changed names and numbers once again.) The Taylors sold the property to William A. Merralls in early 1898.

Merralls, an inveterate inventor, was born in Britain and came to San Francisco to put his engineering knowledge to profitable use in the mining industry. He invented a new gasoline engine to power mining equipment, a cooling system for subways, a self-propelled balloon aircraft, and later, founded an aircraft company that produced biplanes from his own design.

The Sunnyside Conservatory, built in the early 1900s, was another of Merralls' inventions. The wood-shingled two-story center octagon was flanked by single-story wings on the east and west. Concrete walkways wound around the building, and Merralls put in a variety of trees and plants on the property.

Merralls' second wife, with the intriguing name of Temperance Laura, is said to have had plans to expand the grounds and buildings to create a sanitarium. The name of this plan was "Sunnyside Laboratories" and it stuck to the location for decades after.

While visiting friends in Alameda in 1914, Merralls was tragically killed by a train rounding a blind curve. The inventor and entrepreneur had been in the midst of financial difficulties, and his wife, unable to keep up with property expenses, was foreclosed on by the bank that held the mortgage in 1916.

While in the bank's possession (1916-1919) the conservatory property lay vacant and unattended. 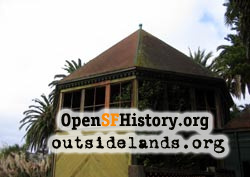 In 1919, the bank holding the mortgage finally found a buyer. Ernest Van Beck and his wife were newcomers to the area when they moved into the house at 258 Monterey Boulevard. The story has been passed down that they initially believed the adjacent grounds merely a wilderness of naturally-occurring vegetation. One of their dogs escaped into the brambles and while retrieving the canine the new owners discovered the massive conservatory building. (This all seems hard to believe, but who are we to question neighborhood lore?)

The Van Becks were somewhat reclusive but well-known members of the Sunnyside community. In addition to restoring the conservatory and grounds, they fought the city to install streetlights on Monterey Boulevard (successfully), and to retain original neighborhood street names (unsuccessfully, as Sunnyside Avenue became Monterey Boulevard while Hamburg Street became Ridgewood Avenue.) Van Beck was an active businessman who reportedly gained and lost fortunes in gold mining and bottled mineral water enterprises.

After Ernest Van Beck died in 1953, his widow sold part of the property to Pat and Walter Anderson, who built the home now at 234 Monterey Boulevard. In 1970 the Andersons purchased the rest of the land except for the old house at 258 Monterey Boulevard. Walter Anderson worked to restore the conservatory building, which had deteriorated and fallen victim to vandals. Walter Anderson died in 1973 and his wife sold the property later that year for $70,000 to a new couple by the same last name, Robert and Ruth Anderson.

Robert Anderson soon applied for a demolition permit from the city to tear down the aged conservatory. A Sunnyside neighborhood association was quickly formed and led by Ken Hoegger to save the building. In 1975, the City and County of San Francisco responded and designated the Sunnyside Conservatory city landmark #78.

This should have bestowed a certain amount of protection for the structure.

But on September 22, 1978, the city granted a new permit request by Robert Anderson to demolish the Sunnyside Conservatory. The building had been made a city landmark just three years earlier, and a required Certificate of Appropriateness hadn't been granted by the Planning Department, but somehow the city approved the permit. Anderson quickly, and legally, began demolition work. The entire east wing of the building went down and the original window sashes were removed from the rest. A scramble by the neighbors and the City of San Francisco had the demolition permit revoked by October 16, 1978, but 30% of the conservatory was gone forever.

With the building dangerously half-destroyed, Anderson tried again to get a demolition permit in 1979, but was held up by a Planning Department review. Then, in 1980, the city's Open Space Advisory Committee approved funds for the Recreation and Park Department to buy the land. The conservatory was "saved" again, and the Sunnyside had a brand new public park. 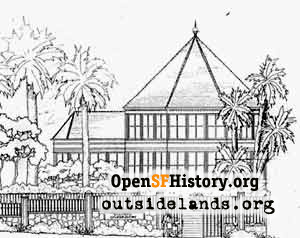 Detail from the Preliminary Master Plan Study for the properties of Sunnyside Conservatory, 2002 - Vera Gates, SF Recreation and Park Department

The last 25 years have featured a lot of planning for the Sunnyside Conservatory's second century. In the mid-1980s, restoration work reconstructed some walls, laid new concrete foundations, and replaced the roof. Neighbors have volunteered substantial hours to manicure the pathways, paint over graffiti, and create a landscape featuring ferns, a Chilean wine palm, and a butterfly garden. Friends of the Sunnyside Conservatory, formed in 1999, secured grants for benches, trash receptacles, and new fencing. The Rec & Park department owes a large debt of gratitude to groups and individuals like the Friends of Sunnyside Conservatory, Sunnyside Neighborhood Association, Miraloma Park Improvement Club, Arnold Levine, arborist Ted Kipping, Ken Hoegger, and others who have done so much. Restoration and improvement of the park has become a small crusade for some.

Preliminary master plans created by the city in 2002 feature impressive terracing, new walls, and a neater landscaping of what is today a very wild-feeling area. Whether a neighborhood consensus on a vision for the park's future can partner with adequate funding remains to be seen. The architectural drawings present a rather grand future for the conservatory, but figures from the past such as Joost, Merralls, and Van Beck all thought big, so it seems appropriate.

Update: The Sunnyside Conservatory reopened to a big crowd on December 5, 2009. See an SF West History Minute on the day. More information on rentals and history of the park and building at http://www.sunnysideconservatory.org