How the Sunset became "The Sunset"

Sorting out conflicting accounts on the naming of the city's largest district.

How the Sunset became "The Sunset"

There are two stories and one claim regarding how the Sunset District received its name. One version credits Aurelius Buckingham with this honor when he allegedly established a residential tract in 1887 in the vicinity of 5th Avenue and Lincoln Way. 1

Another explanation connects the naming of what had been known as the Outside Lands with the 1894 California Midwinter Exposition in Golden Gate Park. Supposedly the exposition site was popularly known as "Sunset City". After the closing of the exposition on July 4, 1894, the appellation "Sunset" was transferred to the newly emerging neighborhood just south of Golden Gate Park.

In a 1911 newspaper article, a prominent real estate developer publicly took credit for naming the Sunset 22 years earlier---in 1889---when he purportedly purchased the first land in the area. 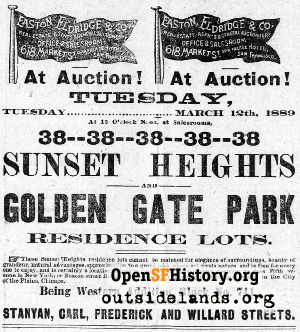 Which story is true? Are any of the stories credible? Or is there a different solution altogether? Let's look at each:

In the late 1880s, an area that would become part of the Inner Sunset was commonly known as the "Sweeney Tract" and the "Byfield Tract".

The Sweeney Tract was a large triangle bounded on the west by 6th Avenue, on the south and east by the diagonal boundary of the old Rancho San Miguel, and on the north by a line just below today's Kirkham Street. Thomas U. Sweeney, who lived at the corner of 7th and Judah, had donated the observatory on Strawberry Hill in Golden Gate Park that bore his name. The Byfield Tract was a large square parcel of land bounded roughly by 7th Avenue, Lincoln Way (H Street), Willard Street and Kirkham Street.

In April 1888, Buckingham and Company advertised the sale of lots on the block bounded by 7th and 8th avenues and I and J streets. Real estate ads in the papers announced "First Block Ever Cut Up In This Locality". $650 was all that was needed to purchase a lot. In the area still identified as the Outside Lands, this block---Buckingham's first---was termed "the Buckingham Block." 2

Before he established Buckingham and Company in 1887, Aurelius Buckingham had been a clerk-salesman in a men's clothing and furnishings store, and a cigar maker/dealer.

Despite this reference, and a number of future real estate dealing in what would become the Sunset, there is no evidence that Buckingham was the first to use the term "Sunset".

The California Midwinter Exposition of 1894 was the brainchild of San Francisco Chronicle publisher Michael de Young. (At the time Mr. de Young also owned many block of land south of Golden Gate Park in the Outside Lands.) Two hundred acres of Golden Gate Park were chosen to be the site of the exposition and ground was broken on August 24, 1893. Opening day was scheduled for January 1, 1894, and the fair was to run until July 4, 1894.

The newspapers referred to the construction site as "the exposition", "the grounds", or "the exposition grounds". As the site began to take shape, the San Francisco Examiner, a rival of de Young's Chronicle, christened it "Mid Winter City". 4

On October 14, 1893, de Young's Chronicle made the first reference to "Palm City", its designation for the exposition site.

On March 11, 1911, the Call printed an article by Sol Getz. Under the heading: "Father of Sunset Proud of Growth: Sol Getz, First to Buy in District, Believes It Best in the City", Getz wrote:

"Now that the Sunset and Oceanside Districts are attracting the desired attention of the home seeking public, causing a brisk trade in building lots, it must be of interest to learn that in the year 1889, I, as a pioneer of the Sunset and Oceanside Districts, made the first purchase of two blocks of land in the Sunset District from Thomas U. Sweeney, had official grades established at my own expense and graded and opened the streets surrounding them. The unsurpassed beauty of scenery from any portion of the upper Sunset of the ocean and park one clear evening long ago appealed to me and I named this appropriately 'Sunset.'" 6

Easton, Eldridge & Company of San Francisco was one of the largest real estate companies in the world in the 1880s. Founded by Wendell Easton (who became its president), it was a dominant force in San Francisco and California real estate, with offices in San Diego and Los Angeles. In 1888 the company opened offices in Chicago, New York, and London. 7

As 1888 came to a close, the real estate columns in the San Francisco newspapers noted that there was an increase in interest in the area "south of the Park and west of Stanyan Street." On February 25, 1889 the Alta reported: "It is likely that the Byfield Tract between First and Seventh Avenues will soon come upon the market. 'Sunset Heights' is the name suggested for this section." 8

This was the first time that the designation "Sunset" had appeared in any form in the newspapers in reference to a San Francisco location.

On February 28, 1889 "Sunset Heights" appeared in large block print when it was advertised in the newspapers that the lots on the block bounded by Stanyan, Frederick, Willard and Carl streets, also known at the time as Western Addition block 741, would be auctioned on March 12, 1889. 9

The years 1888 and 1889 witnessed a tremendous surge in the number of real estate transactions in the Outside Lands. This activity was noted in weekly and semiweekly real estate columns in the daily newspapers. With the exception of the four auctions conducted by Easton, Eldridge & Company in 1889, not a single newspaper made reference of any kind linking "Sunset" with Aurelius Buckingham, Sol Getz, or any other person or business.

The evidence is clearly and overwhelmingly absent that Aurelius Buckingham had any role in the naming of the Sunset. His first block---advertised as being the first to be cut up into residential lots---was simply referred to as the "Buckingham Block". He was involved in many transactions in the Outside Lands, but these were noted simply by the Outside Lands block number.

Nearly five years before the San Francisco Examiner coined the term "Sunset City" for the site of the 1894 California Midwinter Exposition, Wendell Easton, the founder and president of Easton, Eldridge and Company, had already designated four widely separated blocks as "Sunset Heights". Clearly, credit for the naming of the Sunset District should be given to Wendell Easton.

Read more about how the Sunset got his name in "Sunset Finally Becomes Sunset".