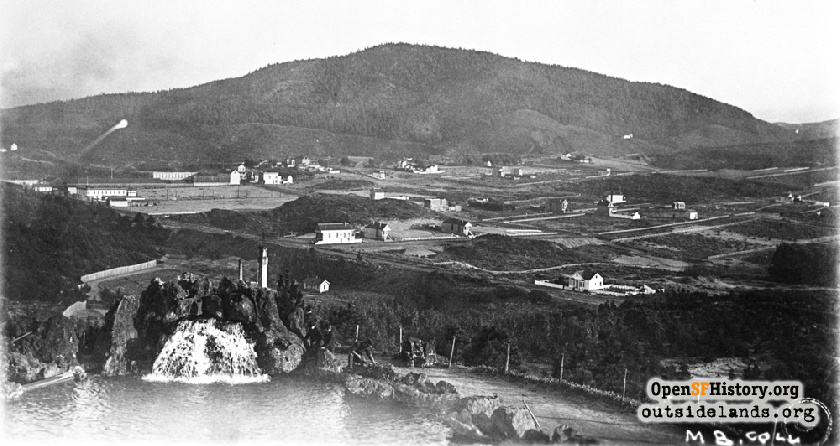 Continuing the story of the Sunset's naming

In a previous article, the myth that Aurelius Buckingham named the Sunset District in 1887 was dispelled. Research has uncovered evidence that it was somebody else who first used the term "Sunset" in reference to the neighborhood. This is that story.

Real estate developer Wendell Easton's use of "Sunset Heights" first appeared in 1889 in reference to a block not even in today's Sunset District. Writing in his first newspaper advertisement for this real estate offering, Easton described the inspiration for the term:

"The golden hued sun, as it bids good day to this western slope and dips itself gracefully into its evening bath in the placid Pacific, throws its last kisses prior to its final dip upon these, the truly Sunset Heights". 1 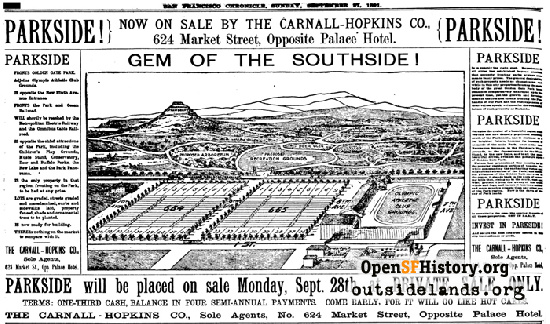 Easton definitely deserves credit for being the first to associate a sunset with the Sunset, but Sunset Heights still is not Sunset. Nevertheless, the phrase was almost immediately adopted by other real estate firms to designate widely separated areas in the yet-to-be named Sunset District.

In October 1886, 30 full blocks and 16 fractional blocks south of Golden Gate Park known as the Richardson Tract were sold for prices ranging from $625 to $1,450 per block. A week later the Berton Tract, comprising 11 blocks, was sold with the highest price for a block at $1,800. 2 This immediately directed the attention of developers and speculators to what had only been referred to as the "Outside Lands". A year later, blocks had increased ten-fold in value, and the area had a name: "South Side" --- as in south of Golden Gate Park.

In the summer of 1887, the South Side Improvement Club was formed, with Wendell Easton as president. 3 Made up of wealthy absentee real estate developers, promoters, and speculators, the interests of this organization were large-scale infrastructure projects that they believed would spur the development of their extensive South Side holdings. At that time there were only a few scattered families in the area. 4 By attracting more people to the South Side, these investors naturally expected to sell land and enhance their wealth.

At the first meeting of the improvement club, what to name the neighborhood was brought up, but it wasn't considered important at the time and was deferred to a later meeting. Four weeks later, the South Side Improvement Club met again and once again the question of naming the district came up. There were many objections to "South Side" because it signified nothing. No consensus was reached at the meeting, so it was decided to let the public decide by submitting suggestions to the press, and to choose an appropriate name at a later meeting. 5 Nothing ever came of this plan.

Stimulated by the prospect of a new transportation link, the Carnall-Hopkins Real Estate Company began leveling the huge sand hills on the two blocks between 8th and 10th Avenues and I (Irving) and H (Lincoln Way) Streets for subdivision into lots and sale. This was the first major development "South of the Park" --- another name for the yet-unnamed Sunset. Given the proximity of the Carnall-Hopkins property to Golden Gate Park and the newly created 9th Avenue entrance into the park, Carnall-Hopkins christened the development Parkside. 7

The first Parkside properties to be sold were on the corners of 9th Avenue and H Street, each selling for $4,000. 8 By the summer of 1892, the Metropolitan Railway had been extended to 9th and I, exerting a "colonizing effect" on the area. 9 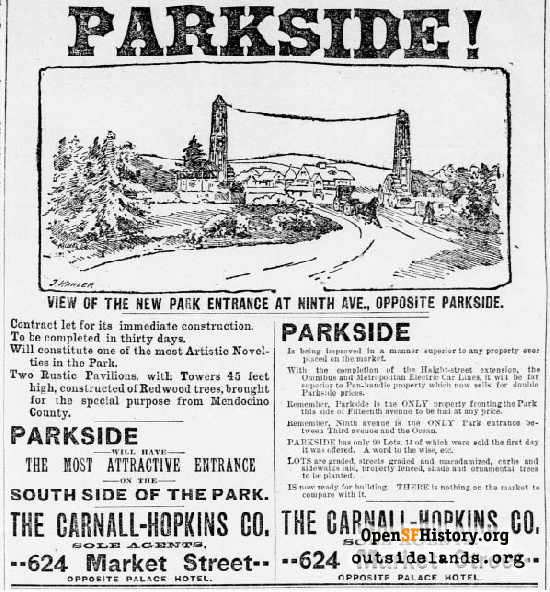 During this time Golden Gate Park, the South Side's main attraction, was undergoing significant development, which would have implications for the adjoining neighborhood. The 9th Avenue park entrance was completed, making 9th the most important street in the district. Stow Lake and a waterfall cascading down Strawberry Hill were under construction. In August 1893, 60,000 people attended the groundbreaking ceremony in the park for the Mid-Winter Exposition.

In the fall of 1893, a new name was coined for the area of M (Moraga) Street between 11th and 12th Avenues. Having an unsurpassed view of Strawberry Hill and the new waterfall, it was given the name "Strawberry Heights". 10

As work on the Mid-Winter Exposition site in Golden Gate Park progressed, the construction of the first large commercial building in the Sunset Heights/South Side/Parkside/South of the Park was underway at 9th and H Street. A $6,000 structure with seven street-level stores and a rooming house and meeting hall above was erected on the southeast corner of 9th and H. 11 Across the street, a $3,000 building was under construction on the southwest corner. 12

Sutro and the Southern Pacific

In May 1894, the confrontation between Adolph Sutro and the Southern Pacific Company and its subsidiaries over streetcar fares erupted. Sutro's battle against the megalithic Southern Pacific Company led to a populist uprising, resulting in Sutro's election as Mayor by an overwhelming majority in November. But Sutro's election didn't end the war. It simply shifted the front from north of the park to South of the Park.

In May 1895, the Regents of the University of California were seeking a site for the Affiliated Colleges, a campus made up of the professional schools of medicine, dentistry, pharmacy, veterinary medicine, and law. Sutro offered 13 acres of his land on the northern slopes of Mount Parnassus on the outskirts of the South Side.

One morning in August 1895, while the University Regents were considering four sites for the Affiliated Colleges, including Sutro's, South Side residents found themselves without streetcar service. Abruptly, without any notice or warning, the Metropolitan line simply stopped running their cars west of Cole and Waller streets, stranding the residents. 13

The San Francisco Call theorized that the Southern Pacific Company discontinued its service to diminish the value of Sutro's offer of land for the Affiliated Colleges. The Metropolitan line was the only means of transportation to the site. Without trolley service, the site was inaccessible and the land was almost worthless. Clearly, it was all part of Southern Pacific's campaign to humiliate and frustrate its nemesis, Adolph Sutro---and the public be damned. 14

Sunset Gets its Name

The residents promptly protested this mistreatment and demanded the restoration of a vital community necessity. But the representatives of the Market Street Railway, operator of the Metropolitan Line, were unsympathetic and unresponsive. Consequently, a grass roots organization arose consisting of the people who lived and worked in the area, owned small businesses and homes, and/or were raising their families and trying to make ends meet in the neighborhood abandoned by the Market Street Railway.

At the end of August, the residents of the aggrieved community met at La Grande Hall at 9th Avenue and H Street. W.H. Jones was elected this new group's first president. The organization needed a name to distinguish it from the already established South Side Improvement Club, which was made up of absentee millionaire real estate speculators and land developers who had no real-life interest in the neighborhood and were not affected by the high-handedness of the Southern Pacific Company. One member, Gus Fox, suggested "Sunset District Improvement Club" in recognition of the magnificent sunset the group had just witnessed outside the hall. 15

The rest is history. On September 1, 1895, Sunset, in reference to the Sunset District, appeared in print for the first time. 16 Sunset Heights disappeared for almost 30 years until it returned to describe the heights east of 19th Avenue. South Side was immediately taken up by a neighborhood organization south of Market Street. Parkside resurfaced ten years later to describe the portion of the Sunset District south of Ortega Street.

The Park View Hotel, in which La Grande Hall was located, was demolished in the mid-1920s. For many decades afterward, the site was a gas station. Over the next century, trees and buildings obliterated the sight lines that once allowed Gus Fox and the other residents of the Sunset to witness actual sunsets from 9th Avenue and H Street.

Today the Canvas Cafe/Gallery occupies the site where Gus Fox and others met that summer evening in 1895 when the Sunset District was named.