Civic-minded folk of the past in words and image. 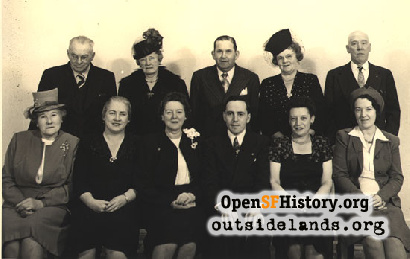 Jerome Sapiro, prominent civic leader and local attorney was nominated for president of the Sunset Community Improvement Club at the regular meeting, Tuesday, November 18th. Being unopposed he will succeed Adelaide Harrel as the guiding genius of this powerful organization when the club has election of the 1948 officers at their next meeting. Mrs. Claire Eggert, society matron and chairman of the membership committee through whose efforts the roster has gained new heights was nominated vice president.

The club's annual Christmas party will take place Tuesday night, December 16th with Claire Eggert as hostess for the evening. Preceeding the adult's party will be one for the children with Santa Claus, stockings of candy, oranges, apples and popcorn. Reservations must be made in advance so the committee will know how to prepare refreshments and how well to load the Christmas tree. Cost of admission is a gift valued between fifty cents and one dollar.

Mr. Porter announces that the men's whist party which is the December game promises to be a huge and successful affair. Mr. Porter is chairman and the prizes will be numerous. There will be fun and excitement and nice prizes for everyone. This big Whist party takes place Thursday, December 4th so mark the date on your calendar now. Mr. Porter says he'll meet you at the door with his hearty and welcome laughter.