A history of rail transit in the Sunset 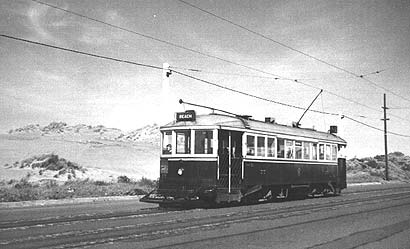 Car 77 of the L-Taraval line rumbling past sand dunes around 40th Avenue in the 1940s.

To residents of the Sunset and Parkside Districts, MUNI's light rail vehicles are an everyday site.

But relatively few people know that streetcars were once a familiar fixture of the early and middle part of the century, filled with nostalgia for those who remember riding them.

They may not know, for example, that there was once streetcar service on Sloat Boulevard, Lincoln Way and 20th Avenue. In fact, the development of the Sunset District was directly tied to the expansion of the Municipal Railway's streetcar service to the area.

Before 1912, the privately owned United Railroads of San Francisco had provided most of the transportation in San Francisco.

Routes such as the #12 operated from the Great Highway via Sloat Boulevard, Junipero Serra Boulevard, Ocean Avenue, Onondaga Avenue and Mission Street to the Ferry Building.

There was a private right of way for streetcars extending the length of Sloat Boulevard. Route #7 operated from Playland-at-the-Beach, that old landmark amusement park (where the big Safeway store at Ocean Beach is now located), also via a private right of way through Golden Gate Park, Lincoln Way, along Frederick, Haight and Market Streets to the Ferry Building.

Route #6 operated from 9th Avenue and Pacheco along Judah, Parnassus, Stanyan, Carl, Clayton, Frederick, Masonic, Haight and Market Streets also to the Ferry Building. Most of the Sunset lacked transit and was undeveloped.

Mayor James Rolph supported the development of the Municipal Railway as a means of promoting the growth of San Francisco. The San Francisco Municipal Railway (MUNI) began streetcar service on Geary Street in 1912 and had extended routes to the Panama-Pacific International Exposition, in 1915, which then later developed into the Marina District.

Muni was the first publicly owned streetcar system in the United States. It is interesting to note that Mayor Rolph, a Republican, supported public ownership of the transportation system at a time when such an idea could be seen as a communist one.

The City's desire to develop the area west of and southwest of Twin Peaks led to the construction of the Twin Peaks Tunnel. This was financed by special assessment districts levied on the property thought to be benefited by the Tunnel.

The L line began service on April 12, 1919 from West Portal to 33rd Avenue, via Ulloa, 19th Avenue and Taraval Street. It was later extended to 48th Avenue and brought to the Ferry Building on October 15, 1923.

To develop the northern part of the Sunset District the Sunset Tunnel was constructed in the 1930s and during World War II.

The extension of the L line to the Zoo, which began its Service on September 13, 1937, was financed by Works Projects Administration funds and would be the last completely new streetcar track to be constructed.

The Market Street Railway Company, the successor to the United Railroads, operated Route #17 on 20th Avenue from Lincoln Way to Wawona and 19th Avenue and then on to Sloat Boulevard. The route was forced off 19th Avenue by the widening of the street and thereafter it ended at 19th Avenue and Wawona.

Older generations of San Franciscans can remember traveling to the Sunday concerts at Sigmund Stern Grove on the #17 streetcar.

Many natives of the City can remember the "bone yard" where Market Street Railway stored unused streetcars at Funston and Lincoln Way. With frequent vandalism, the yard remained an eyesore for many years.

Don Cronin, himself a native of the Sunset District, recalls the time when few people owned cars and "thousands" packed such lines as the #12 on Sloat Boulevard to go to the Zoo and the grand Fleishhacker pool.

Another local landmark he knew well was the Fat Boy Restaurant at Lincoln Way and La Playa, and its other location on Sloat Boulevard, just opposite the entrance of the Zoo.

Fat Boy's neon signs attracted crowds, as patrons, especially football players who after games at Kezar Stadium would make their way to the restaurant for a bite to eat.

The traditional San Francisco streetcars had three sections inside. The center section was enclosed by doors. Smoking was allowed in the outer sections.

Passengers boarded at the rear of the car and paid the fare to a conductor in uniform. Once on board, the conductor signaled the motion of the streetcar down the track by two pulls of a bell cord. He rang the cord once to indicate the next stop for passengers.

In 1945, voters approved the purchase of the Market Street Railway Company for the City.

San Francisco abandoned much of its city-wide streetcar system as buses began to replace streetcars. The streetcars on the remaining five routes were replaced in the 1980s by more modern cars constructed by Boeing-Vertol to operate in the Metro subway system, with all new tracks built before its opening.

Today the L-Taraval and the N-Judah streetcars provide quiet, non-polluting transportation for tens of thousands of riders each day. A proposal to link the two routes by new tracks to be built in the center of Sunset Boulevard was withdrawn several years ago due to neighborhood opposition.

Image: Courtesy of the collection of Jack Tillmany