John Susko was an outstanding amateur golfer with a legacy that continues to benefit charitable causes. 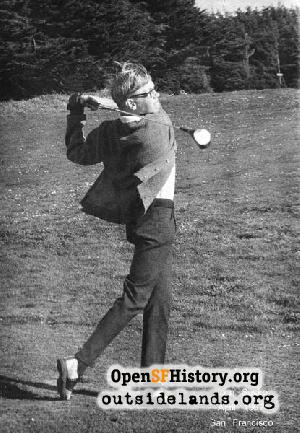 John Susko was a native of San Francisco, raised in the Richmond District. He went to school there – St. Thomas Parochial School, Presidio Junior High, George Washington High School, class of 1967 and San Francisco City College. He went on to graduate from San Jose State College.

He suffered from Crohn’s disease, a chronic and incurable intestinal disorder that had plagued him since he was eleven years old. He spent much of twenty-plus years in and out of the hospital. In spite of this, he became an outstanding amateur golfer.

Susko’s golf career took him from countless rounds as a youth at the Golden Gate nine to the city prep team title with Washington High, and to City College, where he won the Western J.C. title and then to a spot on San Jose State’s golf team.

John later worked as a part-time starter at city courses. He played in the 1976 U.S. Amateur at Bel Air in Los Angeles, qualified for a U.S. Public Links tournament in Hawaii and won the Alameda Commuters tournament twice.

Susko’s last victory was in 1982’s NorCal team championship at Spyglass Hill with former University of the Pacific golfer Bill Corbett. But it was for his victories in the city that Susko will be remembered.

Thin, stoop-shouldered, bespectacled, he stalked Harding course at Lake Merced in sweaters and cords with mud-spattered cuffs. Susko looked like the gardener, but he owned Harding’s bumpy greens.

After years of effort he won his first City title in 1978, edging Frank Mazion 2 and 1. In 1980, Susko’s final round opponent was Steve Gazzaneo and Susko provided a memorable finish for the five-deep gallery around the 18th green. On the 36th hole of the match he rolled in a 35-footer for a 1-up win. His father had just died in February and John was using his Dad’s putter that day.

During every City Tournament John’s caddie was his good friend and former Washington High School golf teammate, Bo Links. Bo included John in the two golf books he has written: “Follow the Wind” and “Riverbank Tweed and Roadmap Jenkins: Tales from the Caddie Yard.”

John was also a fine artist and painter and built detailed scale models of sailing ships. He was working on the USS Constitution “Old Ironsides” at the time of his death at age thirty-three. 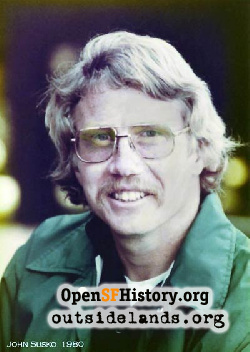 John Susko was inducted into the San Francisco City College and George Washington High School Athletic Halls of Fame posthumously and honored by the Alameda Commuters Club and the Golden Gate Park Golf Club. A small garden area and plaque at the rear of the clubhouse at Lincoln Park near the 18th green is dedicated to his memory.

A memorial golf tournament for the benefit of the Junior Golf program in the San Francisco city schools has been held annually since 1984, a tournament that was started by his friends in the area and the Lincoln Park Golf Club. Part of the proceeds has also gone to the search for a cure for Crohn’s disease. This year a share will be given to Wounded Warrior and Step Out and Play, a group that provides electric single golf carts that rise up so a paraplegic can stand and swing a golf club. The John Susko Memorial Fund continues as a 501(c)3 charity to also support the largest high school team invitational golf tournament in northern California each April at Rossmoor Golf Club.

Appreciation is expressed here for the efforts of Ron Salsig, who started it all with donations to a “lending library" of clubs for the juniors, and the tournament organizers Lee Silverstein, Bob and Doreen Bodeker, Jim Greenbach, Vince Nosal, Bill Kaktis, Pat Patterson, Gary Giubbini, Paul Brady and all the others who have contributed their time and talents over the years to the success of the tournament and the goals of the fund.

Some portions of the above were taken from a column written by Pat Sullivan about John Susko in the San Francisco Chronicle in August of 1983 and are used with the permission of Mr. Sullivan.