An 1890s bid for civil rights at Sutro Baths 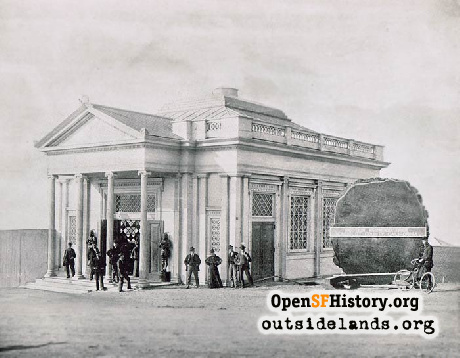 In February, Black History Month, the television is full of footage of the Freedom Riders, Martin Luther King, Jr. at the Lincoln Monument, and sepia-tinted interviews with heroes from the Civil Rights Movement. It's important to remember, however, that the struggle for civil rights didn't begin in the 1950s. John Martini, historian and retired National Park Service ranger, recently discovered more evidence of the long national struggle in 1890s San Francisco.

While leading guided walks or giving presentations about Sutro Baths, John was often asked if the baths were segregated. "My response has always been that they might have been, especially given the racist culture of San Francisco a century ago, but I had no solid proof."

Recently though, John found documentation in old newspaper articles that "Adolph Sutro definitely had a policy of restricting admission to the baths based on race. More specifically, there was an unwritten but unbendable policy about access to the pools when Sutro’s first opened in the 1890s."

Newspaper articles from the 1890s describe how Mr. John Harris, “a colored man,” attempted to buy a ticket to go swimming and was rebuffed, and subsequently filed suit against Adolph Sutro and his Baths.

"Mr. Harris’ lawsuit became an early test case for a then-new California civil rights law called the Dibble Bill," John emailed. "The new law, which had gone into effect on April 29, 1897, declared that 'no railways, hotels, restaurants, barber-shops, bathhouses and other like institutions licensed to serve the public shall discriminate against any well behaved citizen, no matter what his color.' 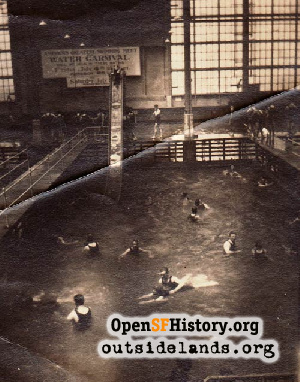 "The [articles] also reveal with stark clarity the blatant racism of the 1890s that directly and unabashedly opposed the rule of law, along with the twisted logic that supported the Jim Crow policies."

It started on the Fourth of July in 1897. John Harris came to Sutro Baths with a few white friends and bought a 25-cent ticket, which purported to entitle him to general admission, a bathing suit, and admission to the changing rooms. The San Francisco Call of August 1, 1897 reported what followed:

On receiving the ticket Mr. Harris presented the same at the proper place, and as he says, in a sober, orderly, polite and well-behaved manner demanded the use of a bathing suit and a dressing-room, intending to avail himself of the opportunities of the bathing pools generally offered to patrons of the place, 'but the defendant seeing and knowing that the plaintiff was a man of African descent, known as a negro and colored man,' refused him the privileges for which he had paid. This refusal he avers was on account of his race and color, and for no other reason whatever, and plaintiff was then and there for said reason denied full and equal accommodations, advantages, facilities and privileges of said bathing-house and said place of amusement.

When the refusal stated above took place, Mr. Harris says, he was in company with several white, or Caucasian friends, and his sensibilities and feelings were injured by the acts of the defendant in holding him up in the presence of his friends as of an inferior and degraded race.

On the 11th of July Mr. Harris made another effort to enjoy the bathing facilities offered by Mr. Sutro, but he was again similarly rebuffed. He assesses his damages at $5000 for each refusal, and consequently demands that Mr. Sutro pay him $10,000.1

In response to the Call story and the suit, the superintendent of Sutro Baths attempted to clarify the company policy:

"Negroes," he said, "so long as they are sober and well behaved are allowed to enter the baths as spectators, but are not permitted to go in the water. It is not a matter of personal feeling with us but of business necessity. It would ruin our baths here because the white people would refuse to use them if the negroes were allowed equal privileges in that way. No one could in equity expect us to make such a sacrifice. I do not think such a case could ever be won against us. Public sentiment would be too strongly in opposition for any law to force such a commingling of the white and colored races. I do not believe the case will ever come to trial."2

The superintendent further speculated the suit could have been intended as a test case or "prompted in spite by some enemy of Mr. Sutro," since in the fifteen months the Baths had been opened no other "colored person attempted to mingle with the whites in the water."3 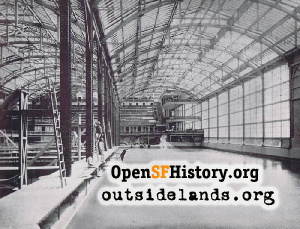 Mr. Harris did have allies in the fight. The Assembly Club, a social organization comprising of (in the Call's description) "the better class of colored people in this City," declared itself interested in supporting financially "this case or any other brought by a negro to test the rights of their race in this matter."4

The Blade newspaper in Santa Rosa weighed in on the matter, claiming that "it will be a hard task to secure a jury that will allow damages even though the law allows the black brethren equal rights with other folk. A negro is a negro and his color is his misfortune, not his fault. He only makes the difference more apparent by rushing into the courts with a handicap laid on him by the hand of the almighty, who knew His business as well in the days of Ham as He does now."5

On February 17, 1898, the San Francisco Chronicle announced the suit's conclusion. With Sutro's only defense being the objections of white patrons causing business loss, the judge in the case instructed the jury it must rule in favor of Mr. Harris by law. The jury awarded the minimum penalty of $50 for each of the two violations set forth in the complaint. It was a small victory, since any verdict under $300 required the plaintiff to pay the costs of the trial. The Chronicle concluded that "after paying his attorneys [Harris] will be little or nothing ahead by the suit."6